The Michelin guide is hugely influential and something that all restaurants aspire to be included in.
Share this guide

First published way back in 1904, the Michelin star guide highlights the very best restaurants in the world when it comes to fine dining. But which are the best of the best and where offers the greatest value for their price tags?

Even the cheapest Michelin-starred restaurants will still set you back a considerable amount, so you may want to consider comparing credit cards to ease the cost a little.

Here’s a look at how well the three-star rated restaurants are reviewed by the public, as well as how much it would cost to eat at each. 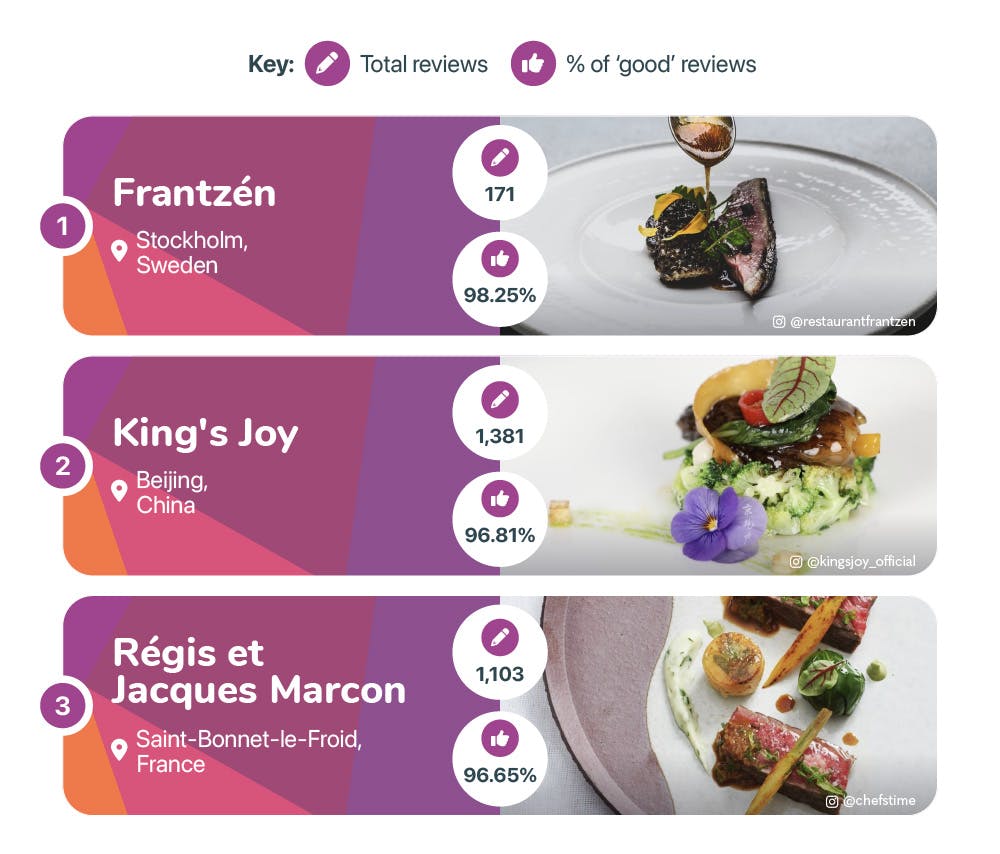 We know that these restaurants are highly rated by critics, but the most loved by the public is Stockholm’s Frantzén.

Frantzén is known for its immersive setting, with guests first being taken on a tour of the beautiful multi-storey townhouse before enjoying their food.

98.25% of reviews left on Tripadvisor for Frantzén describe the restaurant as either ‘excellent’ or ‘very good’.

King’s Joy offers a blend of traditional Chinese food and Western European fusion cuisine and is located in a remodelled courtyard house, just a stone’s throw from Yonghe Temple.

France is the home of haute cuisine, with the third most popular restaurant with diners being Régis et Jacques Marcon in the commune of Saint-Bonnet-le-Froid.

The food by Régis and Jacques Marcon is inspired by mother nature and is housed in a spectacular glazed building. Dishes include locally reared meat and hand-picked mushrooms. 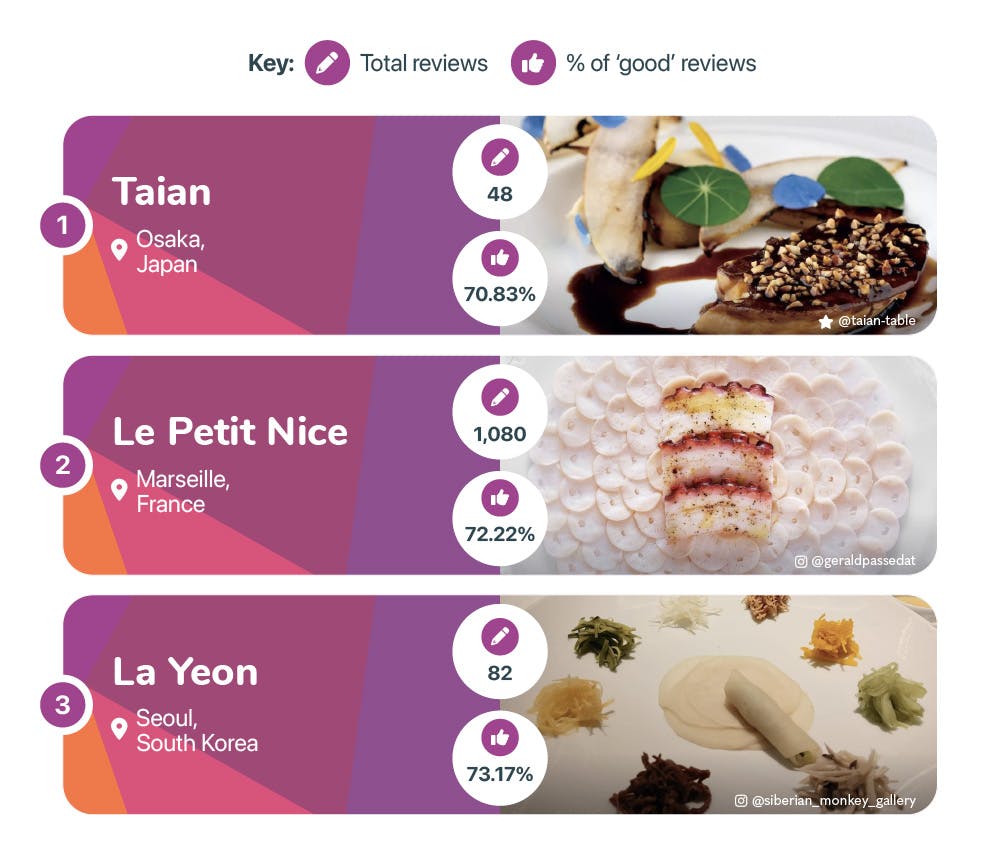 All of the world’s three-star restaurants are clearly highly rated, but some don’t hit the mark quite as often with diners.

Taian, located in Osaka, Japan, is one such restaurant, with 70.83% of reviews being either ‘excellent’ or ‘very good’.

That’s still a very respectable rating but does fall short of many other Michelin-starred restaurants on Tripadvisor.

Another restaurant with slightly lower acclaim on Tripadvisor is Le Petit Nice in Marseille.

Located on the seafront, the food here is sourced from the Mediterranean, with 65 different varieties of fish over the course of the year, including the signature dish “Bouille Abaisse”.

Completing the three lowest-rated restaurants on Tripadvisor is La Yeon, in Seoul, where just 73.17% of reviews described the experience as ‘excellent’ or ‘very good’. 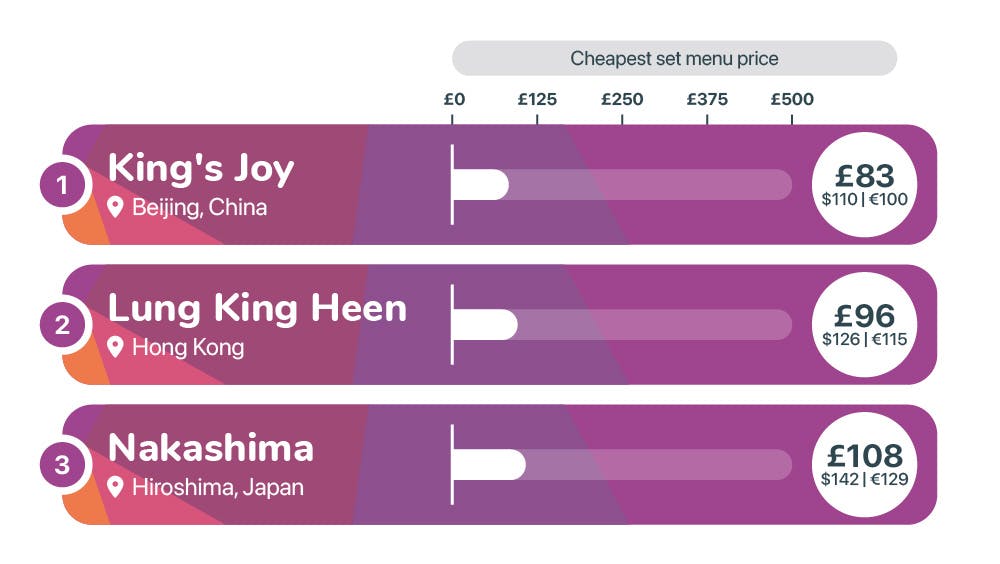 There’s no getting away from the fact that Michelin-starred dining is expensive, but the prices do vary quite considerably.

For example, at King’s Joy (which was also one of the top-rated restaurants on Tripadvisor), the menus start at RMB¥699 per person, which is equivalent to around £83.

Another of the more affordable three-star restaurants on offer is Lung King Heen, located in the Four Seasons Hong Kong.

Hiroshima’s only Michelin-starred restaurant is Nakashima, but it’s also one of the most affordable in the world, with the set menu costing JP¥17,320 (£108).

The restaurant serves kaiseki cuisine and is located in the city’s elegant and affluent Hakushima district.

The most expensive three-star restaurants 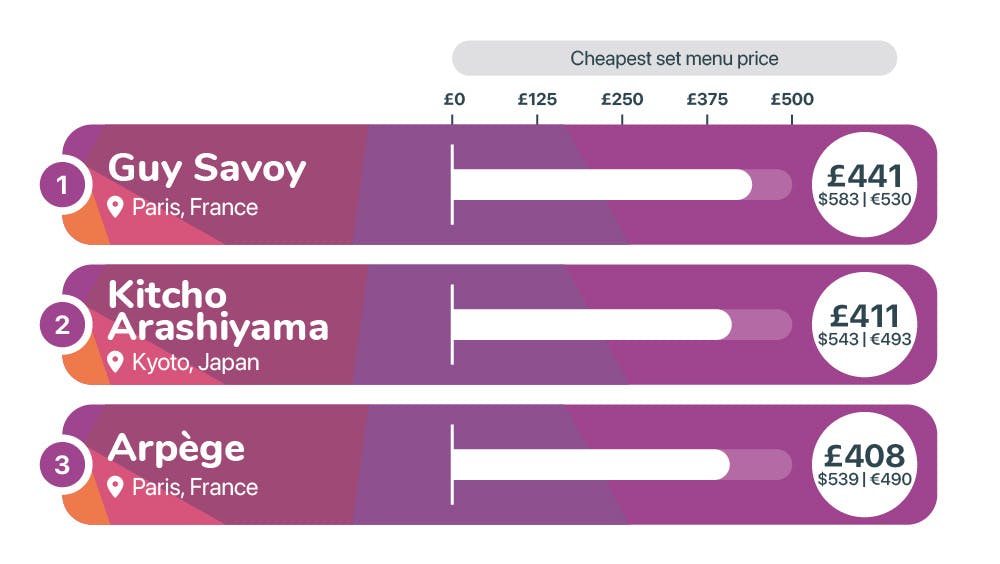 If money is no obstacle, then you might want to check out Guy Savoy in Paris, where the cheapest set menu option costs €530 (£441) and contains 13 courses.

The restaurant is named after its head chef, who Gordon Ramsay has described as his mentor and specialises in nouvelle cuisine.

The second most expensive three-star restaurant is Kyoto’s Kitcho Arashiyama, where the cheapest dinner menu comes in at JP¥66,000 including taxes, which works out at around £411.

No expense is spared at Kitcho Arashiyama, which pays homage to Japan’s tea ceremony traditions, in a classic Ryokan setting overlooking a serene garden.

In third place is Arpège, the restaurant of esteemed chef Alain Passard, where the menu Terre & Mer costs €490 (around £408).

The restaurant is one of the most famous in Paris and has maintained its three Michelin stars for more than two decades with a strong focus on vegetable-based dishes (although some meat-based dishes are available).

So, taking both of these factors into consideration (reviews and cost), which three-starred restaurants can claim to be the best value? 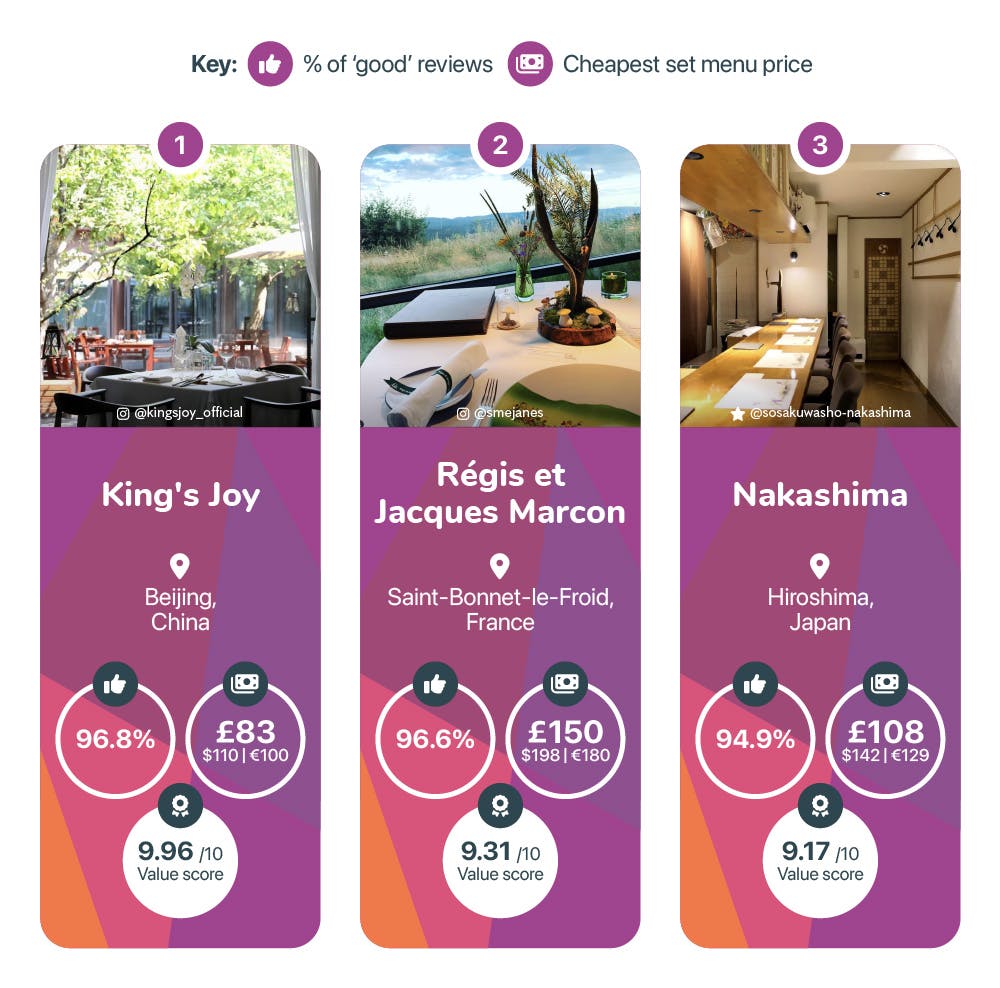 Given that it was not only the second best-reviewed restaurant but also the most affordable, it’s no surprise that Beijing’s King’s Boy comes out on top here.

Founded over half a century ago, King’s Joy is known for its vegetarian menu, all part of its mission to promote a sustainable lifestyle to its customers.

In second place is Régis et Jacques Marcon, with 96.6% of reviews being positive, and the cheapest set menu price of just £150.

As well as incredible food, the beautiful surroundings of this restaurant add a great deal to the experience, with panoramic views of the Valleys of Ardèche and Mont du Velay.

Nakashima takes third place, with 94.9% of its reviews being either excellent or very good, and a relatively affordable price tag of £108, given the quality of the food.

The team here draw upon Hiroshima’s culinary traditions, with special details such as specially-made ceramics that are tailored to each dish.

The chefs with the most Michelin stars

To earn even one Michelin star is a huge honour for a chef, but for some, they don’t just stop there. 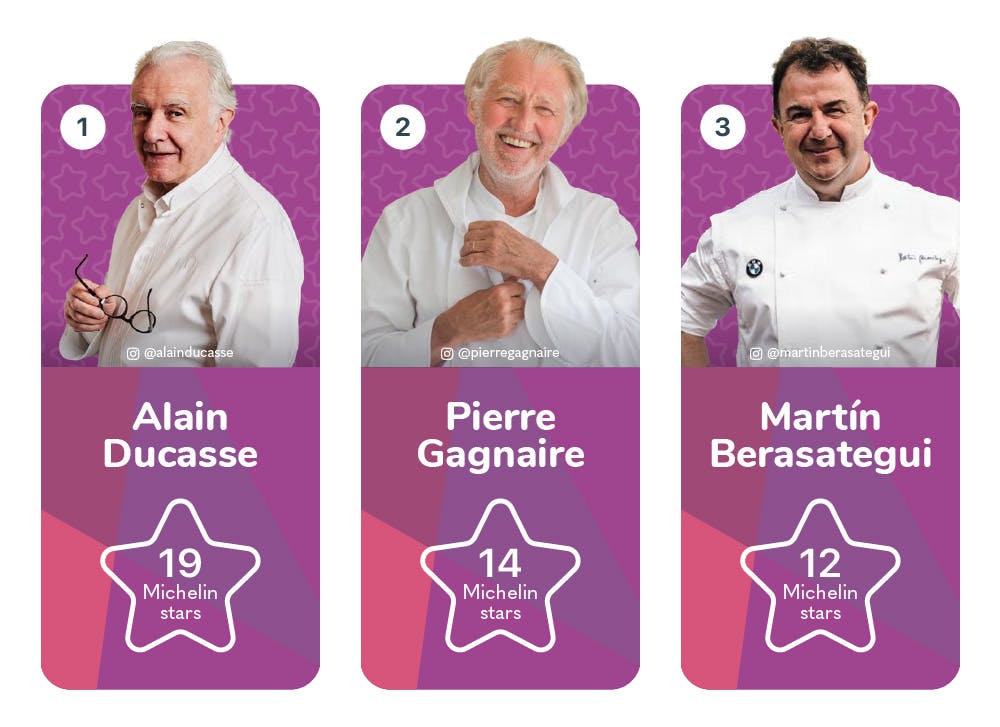 Currently, the chef who has been awarded the most stars is Alain Ducasse, who owns a number of eateries including Alain Ducasse at the Dorchester.

He actually held even more stars until his restaurant at the Hôtel Plaza Athénée in Paris recently shut down after a 21-year run.

Gagnaire is a revolutionary figure in cooking and has been at the forefront of fusion cuisine, introducing jarring juxtapositions of ingredients, flavours, tastes and textures throughout his career.

With 12 Michelin stars, Martín Berasategui comes in third place. His most famous restaurant is the one bearing his name in Lasarte-Oria in Spain and he specialises in Basque cuisine, having been born in San Sebastián.

Luxury dining out - whether at home or abroad - is all about getting away from the mundane and treating yourself to something extra special.

But where should you go to enjoy the finer things in life from Michelin star chefs, cities with the most luxury on offer to travelling in style at the best airports or just to get the best brunch a city has to offer.

Here are our guides to the best places to head - to offer up some delicious inspiration: 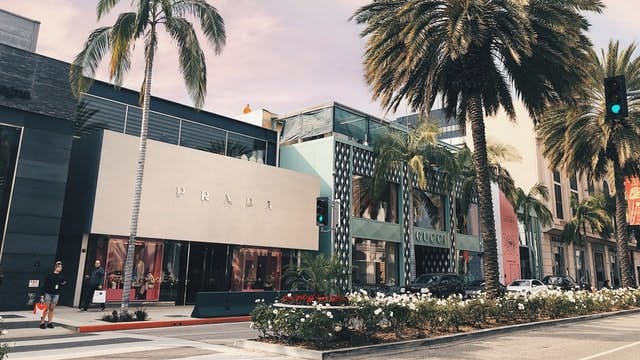 The most luxurious cities in the world

Discover the cities around the world offering visitors the most luxurious hotels, restaurants and designer stores per kilometre. 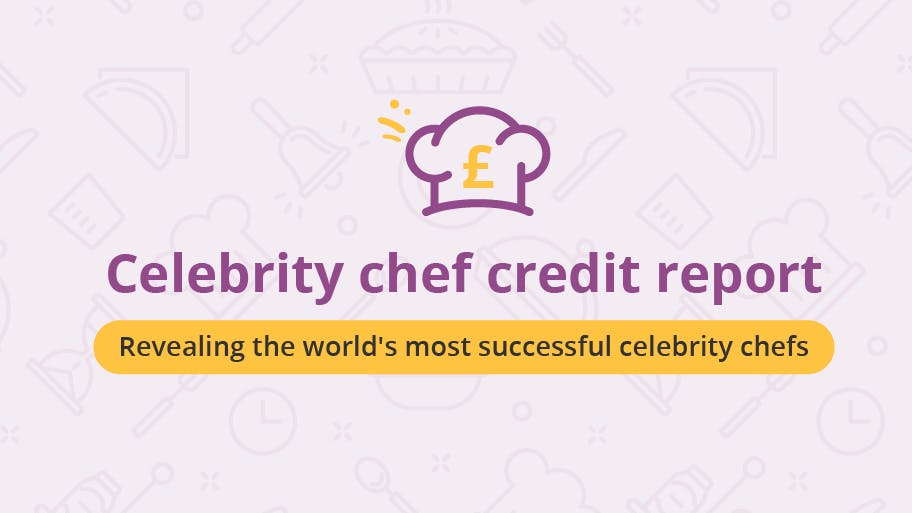 Which celebrity chefs around the world are the most successful? 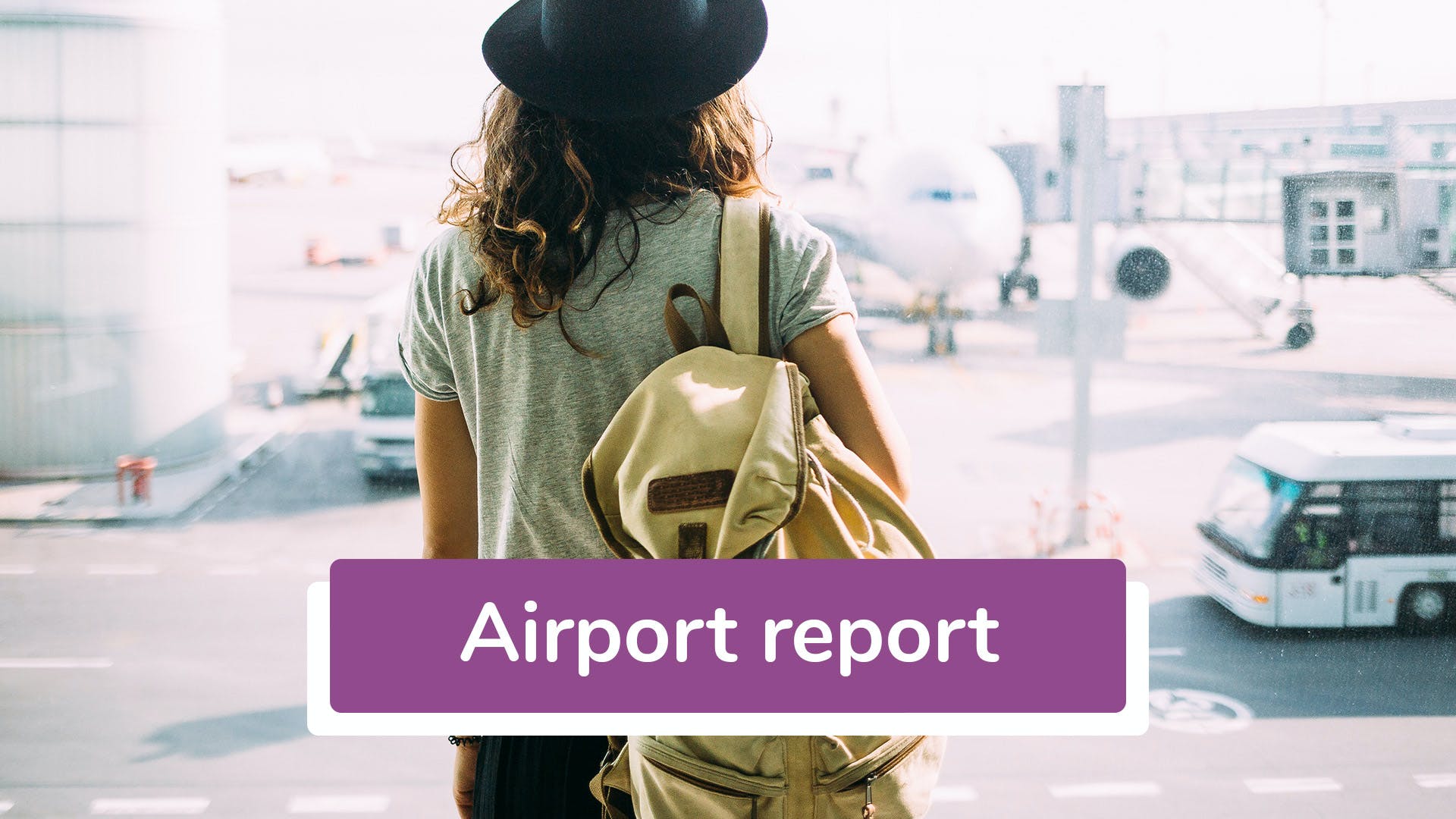 As airports start to welcome travellers back through their gates, our travel experts reveal the airports offering the best experience to holidaymakers?

Our experts analysed costs that make up a typical city break from various data sources, including:

- The average costs of an Airbnb (one night): insideairbnb.com

- Transport (based on a day bus pass, sourced from local transport websites)

- Cost of white wine: Using the top-rated restaurant on tripadvisor.co.uk for each city and sourcing prices from their menu

- Cost of main meal: Using the top-rated restaurant on trip.advisor.co.uk for each city and sourcing the cheapest cost of a main meal

By totalling the costs for each city, we then ranked them from lowest to highest to reveal the cheapest city break destination.