Living close to the world’s most iconic landmarks could increase the value of your home by a whopping 246%* - but which landmarks command the highest premiums?
Share this guide

The Lucrative Landmarks Report from our mortgage experts, analyses the value of properties neighbouring 32 of the world’s most iconic landmarks and compares them to the nearest city’s average house price, creating a proximity percentage increase or decrease for neighbouring areas near an iconic building.

Our research found that homes with landmarks on their doorstep are listed for an average price of £2,015,014, that’s 246% more than the average in the area.

But which landmarks have the priciest postcode markups?

Pick the perfect postcode and compare mortgages to see what your best deal is.

Taking 32 of the world’s most iconic landmarks, we can reveal which iconic structures could be adding the biggest premiums to neighbouring property prices.

Our mortgage experts developed the ranking based on the following criteria:

Each landmark can score a maximum of 32 points against each part of the criteria, giving us a top landmark score of 192.

The Arc De Triomphe tops the list scoring 116 points, making it the most lucrative landmark of them all. To enjoy one of the most iconic views in Paris from your window, you’d pay 354% more than the average Parisian property, with a three-bed apartment setting you back £5.37m, compared to the average of £1.18m.

Château de Chillon, Switzerland’s most visited castle is the next high-scorer on the list of lucrative landmarks. The castle has stood proudly on Lake Geneva’s bank for over 1,000 years, and its popularity has seen property prices skyrocket. To live nearby would cost you 105% more than a home in the nearest city of Vaud, with average property prices topping £3.23m.

Rounding out the top three is Buckingham Palace. To live like a royal in SW1A would cost you 53% more than London’s average property. Prices in the princely postcode would set you back £5.4m, compared to a similar property elsewhere in the capital at £3.5m.

Forget the ‘Waitrose’ effect; prepare for the ‘White House’ effect

Our research reveals that The White House is the most lucrative landmark when we look at the proximity premium figure. Living in a property fit for a President would cost 2,395% more than living in Washington D.C.

The ‘White House Effect’ could help to add £6.7m to a property neighbouring the most iconic ministerial mansion, compared to the average price in DC which we estimate to be £279,907 for a three-bed home.

Selling Up? How a local landmark could double your asking price

Having a famous building on your doorstep usually means increased property value when buying and selling. Still, our report has revealed where you could get some excellent value for money if a landmark location is on your property wishlist.

Could an iconic landmark reduce the value?

Our report found that iconic landmarks around the world with a wealth of history behind them can have a noticeable impact on property prices, but whether that boosts or devalues properties depends on the landmark itself.

The Lucrative Landmarks Report also looked at the volume of traffic and CO2 emissions around each building, to assess how polluted the landmark is.

Scoring high for both traffic and pollution levels, living in a property neighbouring Edinburgh Castle can decrease property value by 3%, despite being the top historical attraction in the Scottish capital.

Properties neighbouring The Great Pyramid of Giza in Cairo, Stonehenge in Wiltshire and Wieliczka Salt Mine in Krakow all sent prices of neighbouring homes plummeting by a third (-34%) despite being global landmarks.

Property prices soar for homes near National Parks around the world

A three-bed property with a neighbouring National Park attracts a 97% premium over an identical home in the closest city.

From Yellowstone to the Cairngorms, we’ve analysed house prices neighbouring 20 of the world’s most visited National Parks to reveal just how much these natural wonders add to property prices.

Homebuyers pay a £653,000 premium on average to have the world’s most iconic National Parks on their doorstep. 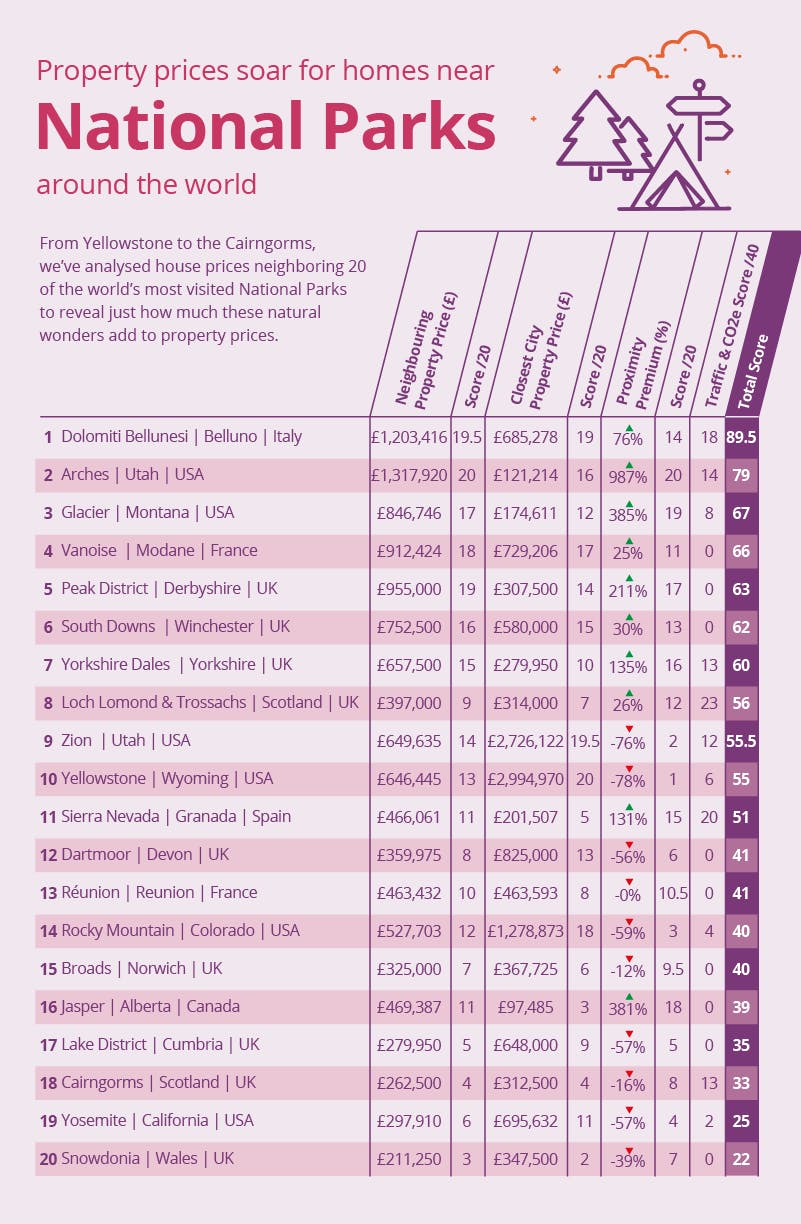 The Dolomiti Bellunesi National Park in the Italian province of Belluno tops the National Park ranking with 89.5 points out of 100. In the foothills of the Dolomites, purchasing a property in this beautiful Alpine town would cost you 76% more than buying an identical property in the nearest city, at a cool £1.2m.

In the UK, the Peak District is the most expensive national park to live in, with an average price of £466,742; meanwhile, Snowdonia is amongst the most affordable at £211,250 for a three-bed property near to the park.

Over in the US, Arches National Park in Utah has the highest premium, and you can expect to pay 987% more for a property close to the park than in the surrounding area.

And as for the most affordable? Yellowstone National Park in Wyoming, Zion National Park in Utah and Rocky Mountain National Park in Colorado have some of the lowest premiums. On average, a property close to these national parks would set you back £607,000**, which is 70% less than the average property in the nearest city.

From Disney to Legoland, we’ve determined which theme parks could double the value of homes in the neighbourhood. Each park can score a maximum of 11 points, giving us a top score of 66.

Topping the list is Hong Kong Disneyland Resort, scoring 49/66. The closest three-bed homes to the parks are listed at a magical £894,689, that’s 93% more than the average property in Hong Kong at £462,514. The Walt Disney World Resorts scored low on both pollution and traffic levels, making it the most desirable theme park on the list and the most expensive. 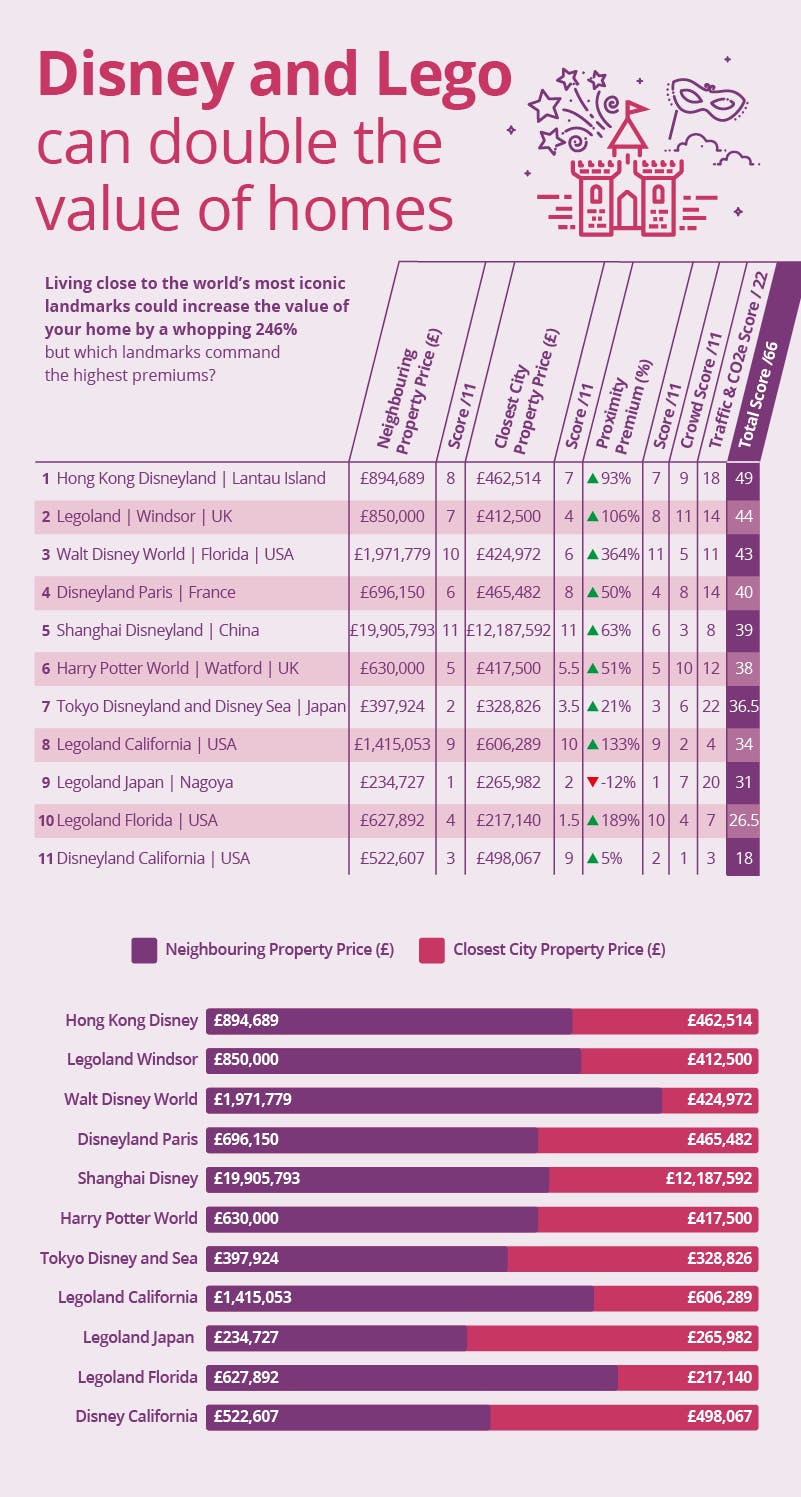 Living near one of the seven Disney resorts worldwide could double the value of your home (105%), but Shanghai Disneyland Resort adds the biggest markup to neighbouring properties; 63% above the Shanghai average price.

Legoland can be lucrative too, where property prices soar by 104% on average depending on the location.

Legoland California is top of the blocks, with properties listed for £1.4m, 64% more than properties close to Legoland Windsor.

Seven Wonders of the World

Have you ever ‘wondered’ how much it would cost to live near the Seven Wonders of the World?

It’s more affordable than you might think to be neighbours with one of the seven wonders; property neighbouring Rome’s Colosseum has just a 41% premium, with a three-bed setting you back £861,865 on average, compared to the average property in Rome at £613,402.

For a landmark location that won’t ‘ruin’ your budget, Chichen Itza in Mexico is one of the most affordable. A property in proximity to the ancient city would set you back just £41,527.

Salman Haqqi, money.co.uk’s personal finance expert, highlights one potential reason for the impact that landmarks have on the world’s property prices:

“Living near a local landmark can help sell a home, but it does depend on the landmark. Some homeowners will love being next to an iconic tourist attraction; however, others might find the pollution, traffic and footfall overwhelming.

“Our report has found that globally, landmarks can be a fantastic selling point, but there are so many other things to consider, such as parking outside your home and a big garden to name just a few.

“If you find your perfect property and it does have a neighbouring attraction nearby, it’s worth visiting at different times of the week to get the full picture of how people visiting the attraction will impact you.

“For example, the roads around your property could be far busier at the weekend than during the week, and if there’s a lack of parking facilities you may have that to contend with too.

“Before starting the search for your new home, make sure you have a budget so you know the maximum amount you can afford to spend or borrow based on your deposit and mortgage offer.”

If you're thinking about moving closer to a landmark in the UK, you may want to compare mortgage deals.

In addition to the property prices, we included population density, traffic levels and CO2, all taken from Numbeo*****.

Our mortgage experts developed the ranking based on the following criteria and applied it to all of the landmarks in the report:

**Property data for housing near US national parks was sourced further away due to the size of the parks and no housing options available in the parks.

***Removed Giant's Causeway and Neuschwanstein Castle due to incomplete data