When you’re looking to purchase a new home, it doesn’t take long to realise that properties aren’t as cheap as they used to be.

Even in the face of a global pandemic, property prices continue to rise across the world, as they have been doing for some time now.

However, the picture isn’t the same in every country as property prices fluctuate at different rates.

Our mortgage experts have looked at how the average property price has changed compared to 2010 to see which nations are seeing the cost of property outstrip that of earnings.

The countries with the greatest property price increases

The country that has seen its average property prices go up the most in the last decade is Israel, where the average price has increased an incredible 345.7%.

The analysis showed that in Israel, the rate of increase when it comes to property prices was far higher than the average rate increase of inflation over the decade, which stood at just 0.92%.

Switzerland is quite well-known for having a high cost of living and being an expensive place to live and work, and this has only increased over the last ten years.

The increase is even more shocking when you consider that the average wage in Switzerland has only increased by 2.4% since 2010, and inflation has dropped slightly (0.04% on average over the last ten years).

Switzerland’s neighbours Germany also saw a significant increase in property prices over the last ten years, going up by 162% since 2010, compared to a 14.2% increase in wages.

The United States is one of the world’s biggest economies and was also one of the nations that saw its property prices increase the most.

Hungary’s property prices were among the lowest in 2010 and while they remain below £2,000 per square metre, they saw the fourth-highest increase over the decade, going up by 137.8%.

The country also experienced one of the biggest increases in inflation too, with the rate going up by an average of 2.56% each year between 2010 and 2020.

Another country that had relatively low prices per square metre back in 2010 but has seen a rapid rise over the last decade is Slovakia, where the cost rose from £997 to £2,111, an increase of 111.8%.

France’s average property price rose by just more than double in the last ten years, from £3,459 in 2010 to £6,934. Although France saw one of the lower increases when it came to wages, which went up by 2.8% in the same period.

Portugal’s average property price increased by 86.5% but was one of the only nations that actually saw its wages go down over the course of the last decade, dropping by 1.3% to £20,529 a year.

While Japan’s property prices increased by around three quarters, the country only experienced moderate rises when it came to both wages (1.1%) and inflation (0.42% on average) over the course of the last decade.

Where are property prices increasing the most? 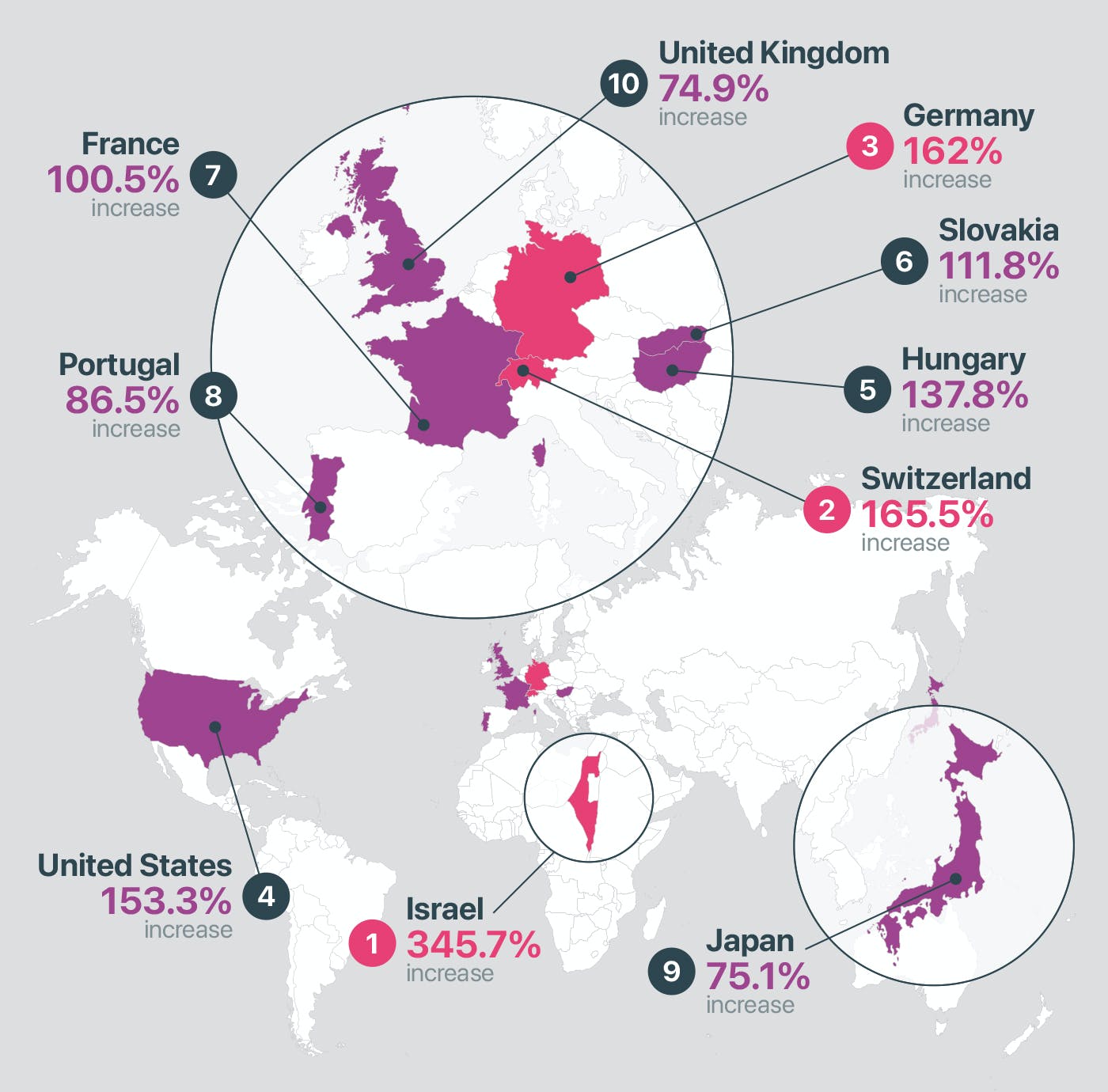 Below you can see how the average property price has changed in the last decade in 30 countries, as well as how this compares to the difference in wages, and the average inflation rate across the last ten years. 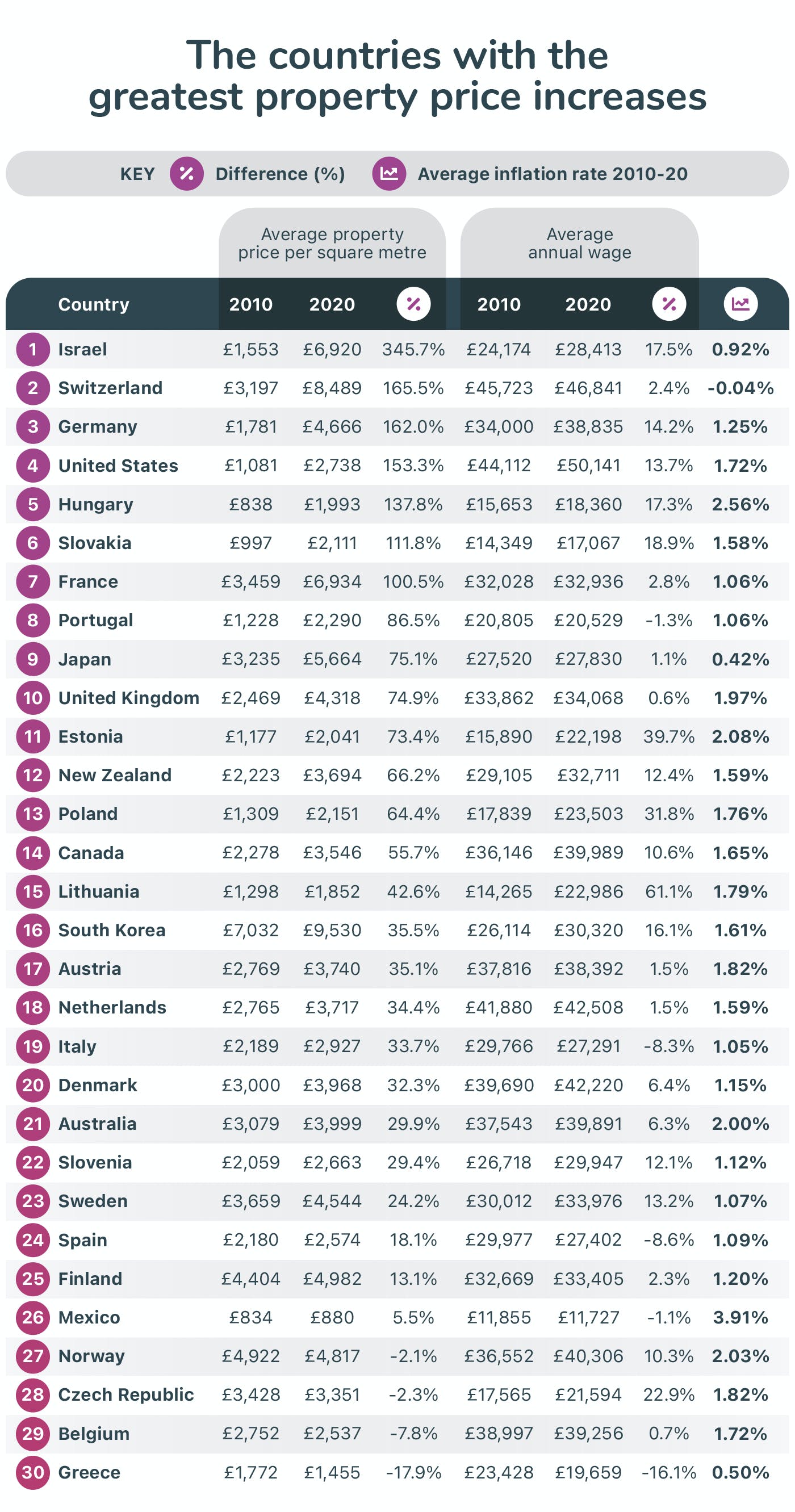 Average property prices per square metre sourced from Numbeo. For each country, money.co.uk took the prices for both properties in city centres and outside of city centres, taking an average of these two prices.

Average wages were sourced from OECD.Stat and refer to the average annual wage for full-time employees, converted from US dollars as of 16th August 2021.

Average inflation rates sourced from the World Bank data, taking an average of the annual rates between 2010 and 2020.