Around the world, there are millions of homes lying unoccupied, while many remain homeless. But which countries have the biggest share of these vacant homes?
Share this guide

Homelessness is undoubtedly a big problem around the world, with an estimated 100 million people currently homeless and 1.6 billion lacking adequate housing.

While there are a number of potential reasons for homelessness, a lack of appropriate housing is often a factor. Which makes the fact there are millions of homes around the world lying empty even more shocking.

But which countries are the worst offenders when it comes to leaving properties vacant, and how do those figures stack up against the number of people in need of housing in each country?

To find out, our mortgage experts have analysed OECD data to reveal the countries where empty properties make up the biggest proportion of the total housing.

The countries with the most empty homes 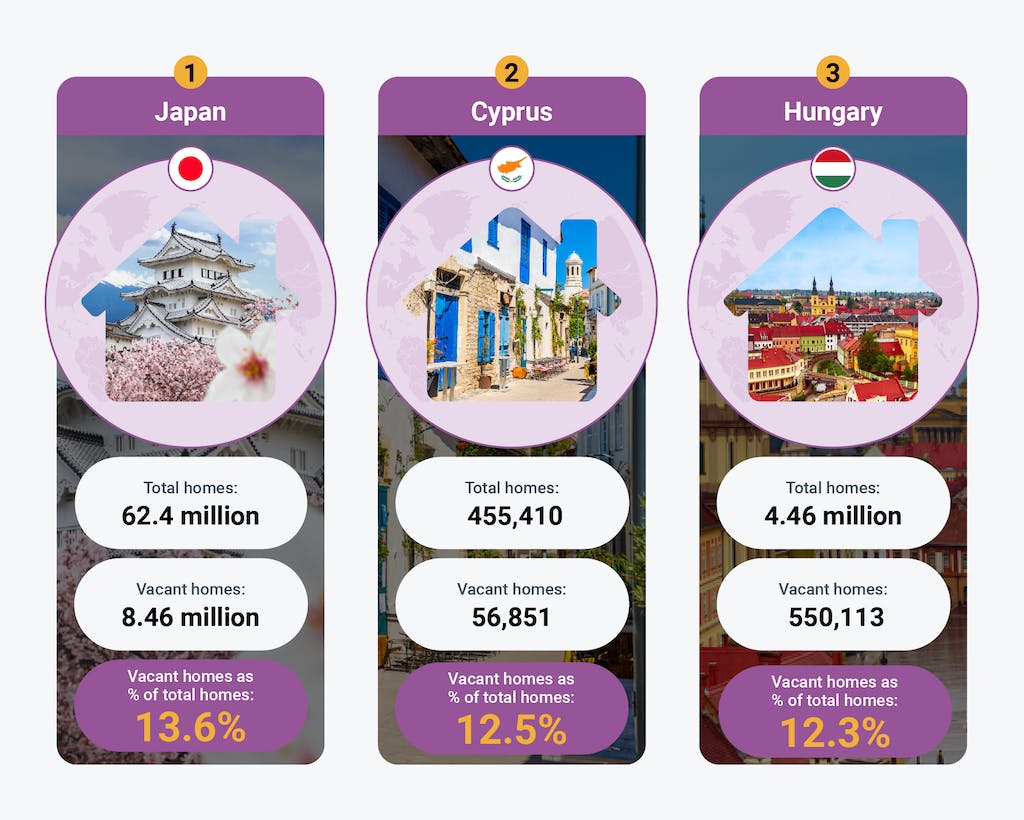 Empty properties in Japan are known as ‘akiya’ and they’re increasingly becoming a problem, now accounting for 13.6% of all homes in the country. An ageing population and a decline in birth rate means that Japan’s population is currently declining.

As a result demand for housing is dropping, with just under eight and a half million properties currently sitting empty. Another potential reason for the many empty homes in the country is a second-home tax, which puts people off inheriting any relatives’ properties, due to hefty fees.

There are 56,851 empty homes in Cyprus, which may not seem like that many, but it actually accounts for one in eight homes in the Mediterranean island nation. Many of those can be found in the ‘ghost town’ of Varosha, an area of the city of Famagusta, that used to be a major tourist hotspot but has since been completely abandoned after the country was invaded in 1974.

Another country with a high level of empty homes is Hungary, where 12.3% of properties are currently unoccupied. Like Japan, Hungary has both an ageing and declining population, where many people are relocating from the smaller rural towns to major cities such as Budapest. Of around four and a half million homes in the country, just over 550,000 are currently unoccupied.

The countries with the most empty homes compared to homeless population 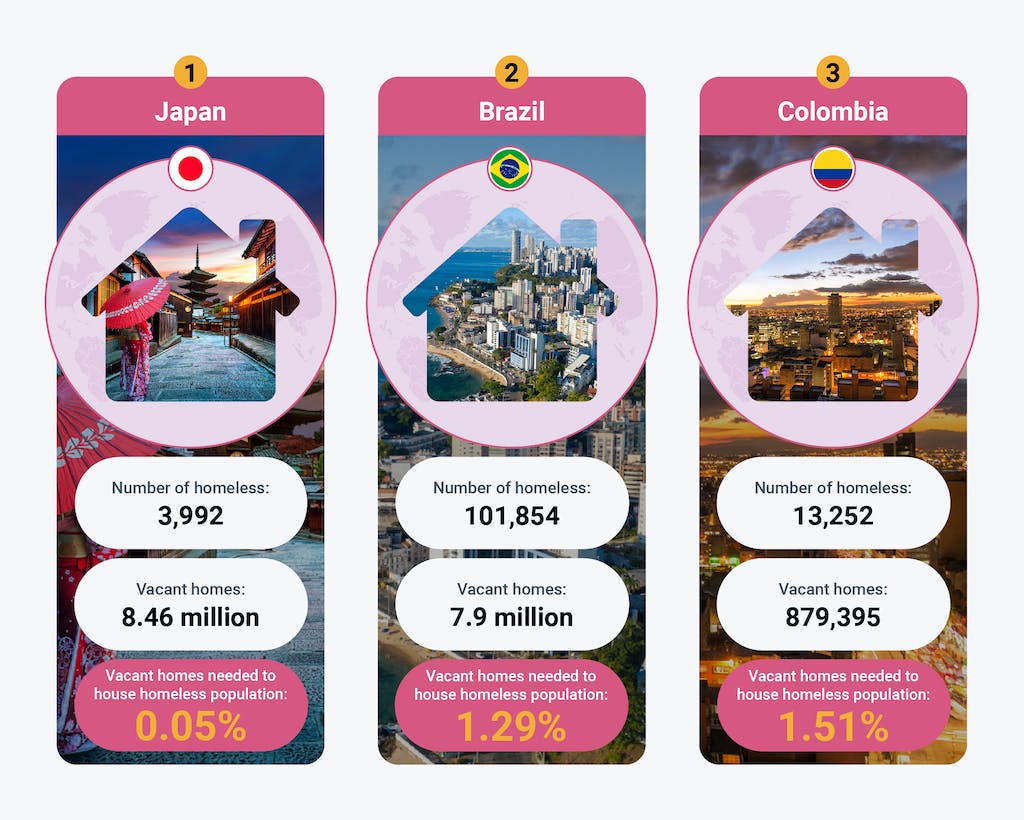 Given that Japan had the highest percentage of empty homes, it might not be surprising to see that it's also the country that could rehome its homeless population the quickest. What perhaps is more surprising is just how few people are homeless in Japan. The country has just under 4,000 homeless people out of a population of over 125 million, meaning that just 0.05% of its empty homes would be needed to house every homeless person in the country.

Brazil’s homeless population is estimated at just over 100,000 people, whilst the number of empty homes in the country sits at 7.9 million. This means that just 1.29% of the vacant housing portfolio in Brazil would be required to house the nation’s homeless population. However, with that said it is also estimated that of those Brazilians that do have homes, over 50 million are currently living in inadequate housing.

In third place is another South American country with just 1.51% of the total 879,395 vacant homes in Colombia being needed to house the estimated homeless population of 13,252 people. As in Brazil, while the homelessness statistics are fairly low in relation to the population, many live in inadequate conditions.

The number of vacant and total dwellings in each country was sourced from the OECD’s indicators on the housing market: HM1.1 Housing stock and construction and refer to the percentage of vacant dwellings, out of the total dwelling stock, for 2020 or the latest year available.

The homeless population for each country was also sourced from OECD, from the indicators on housing conditions and affordability: HC3.1 Homeless population estimates and refers to the estimated number of homeless people in 2020 or the latest year available. Note that the data for England refers to households, as opposed to individuals. Specifically, the data refers to the number of households applying for housing assistance to local authorities who are accepted as statutory homeless during the year of reference.