Buying a home is always an exciting time, but for those among us who love DIY and interior design, the prospect of buying a property that you can rip apart and start again can be even more thrilling.
Share this guide

The Renovation Nation Report, by the consumer spending experts at money.co.uk, looks at how much homeowners are really spending on their properties, what part of their home they’d change if money was no object and where in England is best to buy a doer-upper.

Renovating a property can often be costly, so you may want to consider a home improvement loan.

Money.co.uk surveyed more than 2,000 adults to understand their attitudes toward their homes and what their DIY, time and money have been focused on.

The survey found that over three-quarters (77%) of UK homeowners have spent money on changing or improving their properties this year. And of those homeowners, over half (51%) cited spending more time at home during the pandemic informed their decision to invest in their property.

How much have UK homeowners invested in their properties in 2021?

When asked, the average UK homeowner admitted to spending an average of £1,473 on home renovations, furnishing and DIY projects in the first eight months of this year. Across the country, that equates to over £21 billion on doing up our properties.

Where have UK homeowners been focusing their renovation work?

After almost a year of being confined to our homes, it’s perhaps unsurprising that one in five UK homeowners have spent the majority of their home improvement money on their garden. 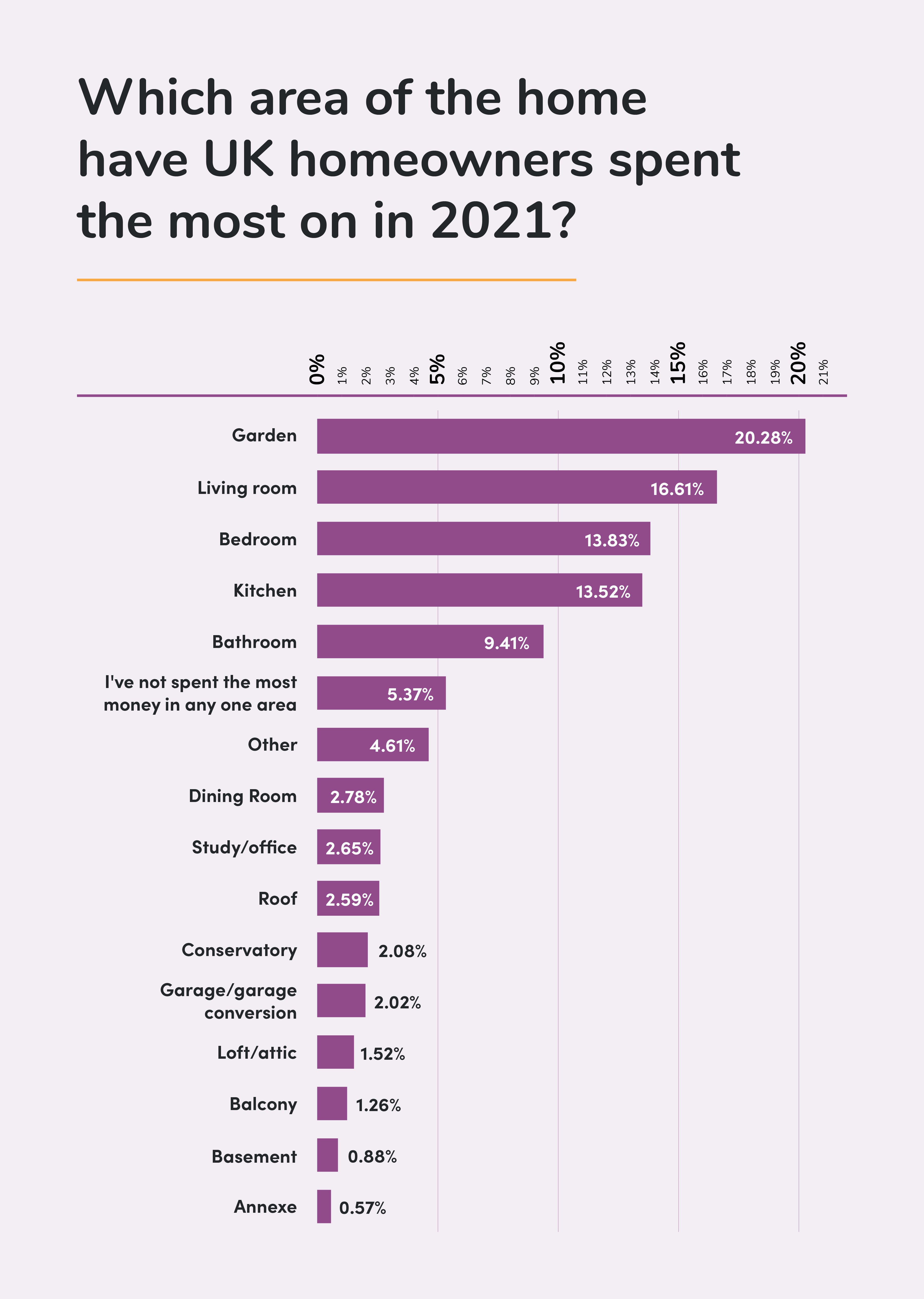 Our love of gardening has clearly blossomed during the pandemic. When asked what home projects they’d invest in if money were no object, a third (32%) of respondents said a garden summer house or work studio and almost a fifth (18%) said a greenhouse or vegetable patch.

This green-fingered trend could be seen across the age groups, with the exception of Gen Z who claimed their kitchen was the room they’d spent the most on in 2021, and a home gym would be the top priority if money were no object.

How have UK homeowners funded their renovation projects?

With many struggling with the impact of lockdown on their finances, money.co.uk were keen to find out how homeowners have afforded the renovation projects they’ve taken on this year.

Why are UK homeowners investing in their properties?

While over half of UK homeowners may have cited the pandemic playing a significant role in their decision to dabble with DIY, money.co.uk were also interested in finding out the reason why so many of us are spending time and money on our homes in 2021.

Over a quarter (27%) of those asked said that spending less money on going out had given them more money to spend on their homes and over a fifth (22%) cited wanting to increase the value of their home.

Need help with your renovation project? These are the locations with the best tradespeople in the UK

We asked the team at RatedPeople to provide us with the average ratings for Builders, Carpenters, Electricians, Painters, Plasterers, Plumbers and Tilers across England.

When taking the average score from each, the following locations have the highest rated tradespeople in the UK:

But where has the best individual trades?

While some homes will need all the trades to help complete the project, others will need just a few so below we’ve listed the locations with the highest ratings (5/5) for each of the trades:

The best locations to hire a builder

The best locations to hire a carpenter

The best locations to hire an electrician

The best locations to hire a painter and decorator

The best locations to hire a plasterer

The best location to hire a plumber

Where in England is best to undertake a home renovation project?

For those already owning their own property, the lockdowns over the past two years have presented a great opportunity to get to grips with DIY jobs which may otherwise have been pushed aside.

But where in England would be best if you’re a prospective first-time buyer looking to flip a house or an existing homeowner ready to take on a whole new project? 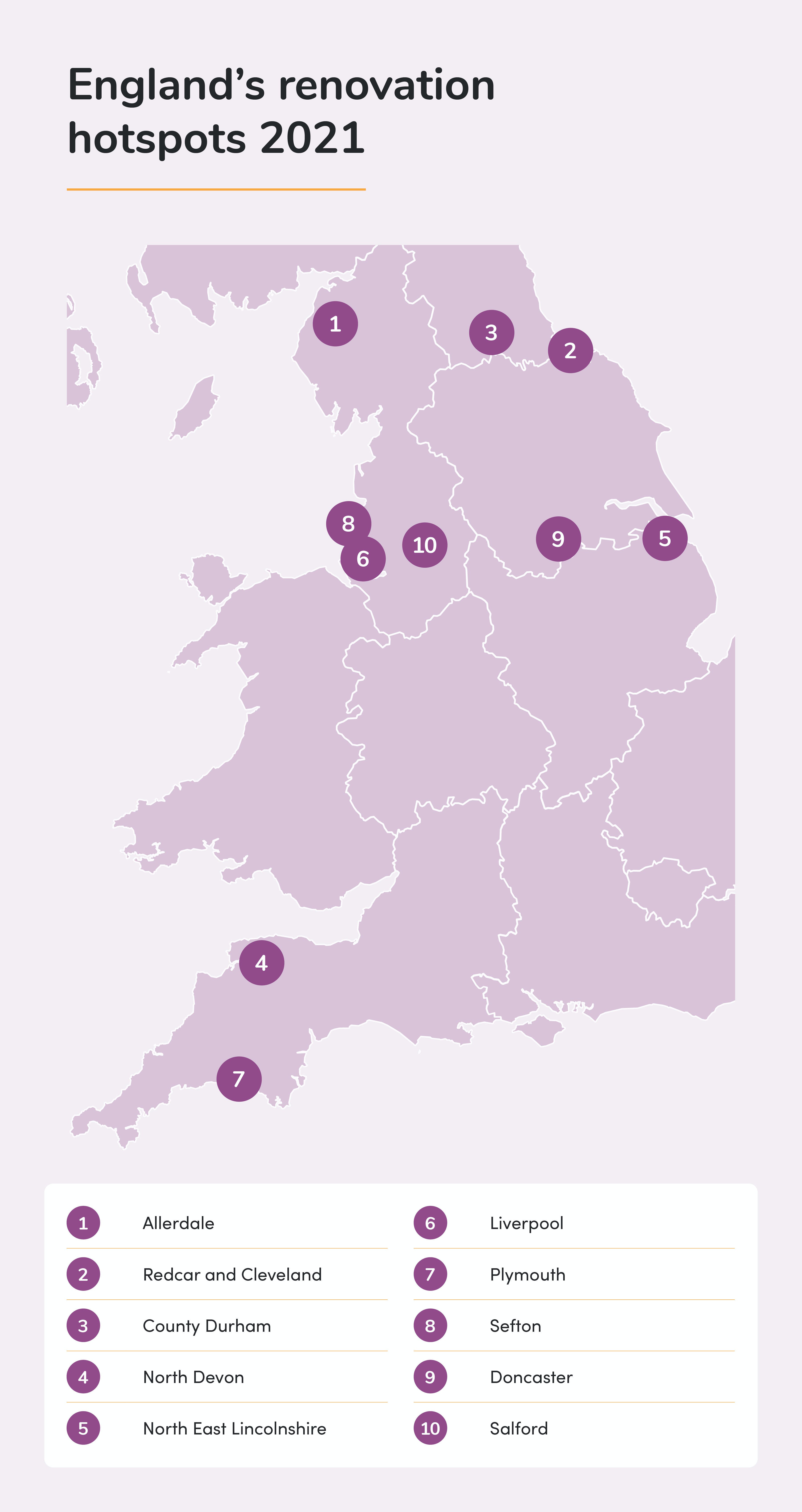 Allerdale has been named England’s top renovation hotspot. With a planning application approval rate of 97%, an average property price of £178,000 and tradespeople averaging over 4.8/5 rating, this could be the place to go if you’re looking to buy, flip and sell a property.

England’s third best renovation location is County Durham. With the average property costing £120,000 and tradespeople averaging 4.75/5, this may be an ideal location to purchase your very own doer-upper.

Where is the best place to buy a doer-upper in London?

Greenwich has been named the best borough for buying a renovation project in London. Average property prices in the borough cost £450,000 and tradespeople average an almost perfect 4.9/5.

Where are the most renovation opportunities in England?

According to Zoopla, the following locations have the highest percentage of homes that are listed as a renovation opportunity:

Where has the highest planning application approval rate?

We analysed the latest planning application data to reveal the top locations if you’re looking to reconfigure your home.

Of the 280 locations we analysed, here are the top five locations in England:

At the other end of the scale, these are the worst five locations for planning application approvals:

Number of households data was collected from the latest government data sources:

Data for the number of properties listed as renovation opportunities was taken from Zoopla: https://www.zoopla.co.uk/treehouse/renovation-hotspots/

Average tradespeople review was provided by Rated People. We asked for the average ratings of the following trades across England: Builder, Carpenter, Electrician, Painter, Plasterer, Plumber and Tiler.