The world can be a remarkable place and is home to some truly breathtaking sights and scenic landscapes. But which countries around the world can claim the most of these natural wonders?
Share this guide

From magnificent mountains to colourful coral reefs, the world’s natural marvels are a huge draw for travellers.

Whether you want to hike the Himalayas, snorkel in the Great Barrier Reef, or see Niagara Falls, some of the very best tourist attractions are those that aren’t man-made.

If you’re looking to spread the cost of a dream bucket list holiday, be sure to compare personal loans to ensure that you get the best deal.

But which countries are the best to visit if you want to see most of these natural beauty spots?

Here’s a look at where in the world is home to the most natural sights per 100,000 square kilometres such as mountains, volcanoes, coral reefs and more.

The world’s most naturally beautiful countries 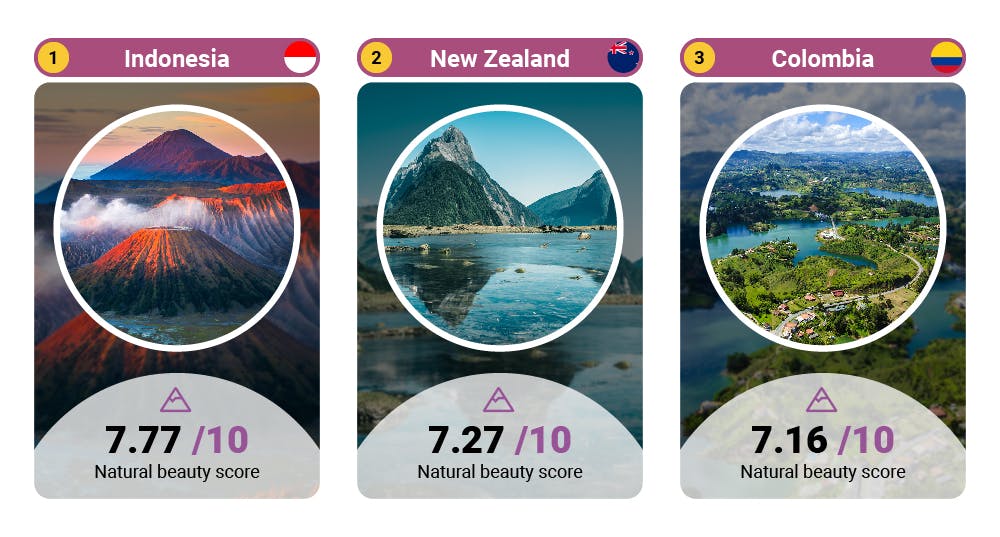 Taking the crown as home to the most natural beauty spots per 100,000 square kilometres is Indonesia, home to over 17,000 incredible islands, which means that it has over 50,000 km of coastline.

And just off the shores of these islands, you’ll find over 50,000 square kilometres of coral reef, teeming with life, much of which can be explored from the popular province of Bali.

Some of Indonesia’s most popular natural attractions include the tropical forests on Sumatra and Kalimantan (including an orangutan reserve) and a number of UNESCO World Heritage Sites such as the Komodo National Park.

New Zealand is home to rolling hills, sharp mountain peaks (including the Southern Alps) and a number of active volcanoes.

With a very diverse landscape, thousands of people flock to New Zealand to sample its natural wonders for themselves.

In fact, many films and TV shows have chosen it as a shooting location to stand in for fantastical locations such as The Lord of the Rings’ Middle-earth.

Colombia comes in third and like Indonesia and New Zealand, enjoys a long coastline along the shores of the Caribbean.

However, it has a very varied landscape too, from the Andes mountains to the Amazon rainforests and scores very highly for the fact it is home to 500,000 square kilometres of tropical forest.

The top 10 most beautiful countries 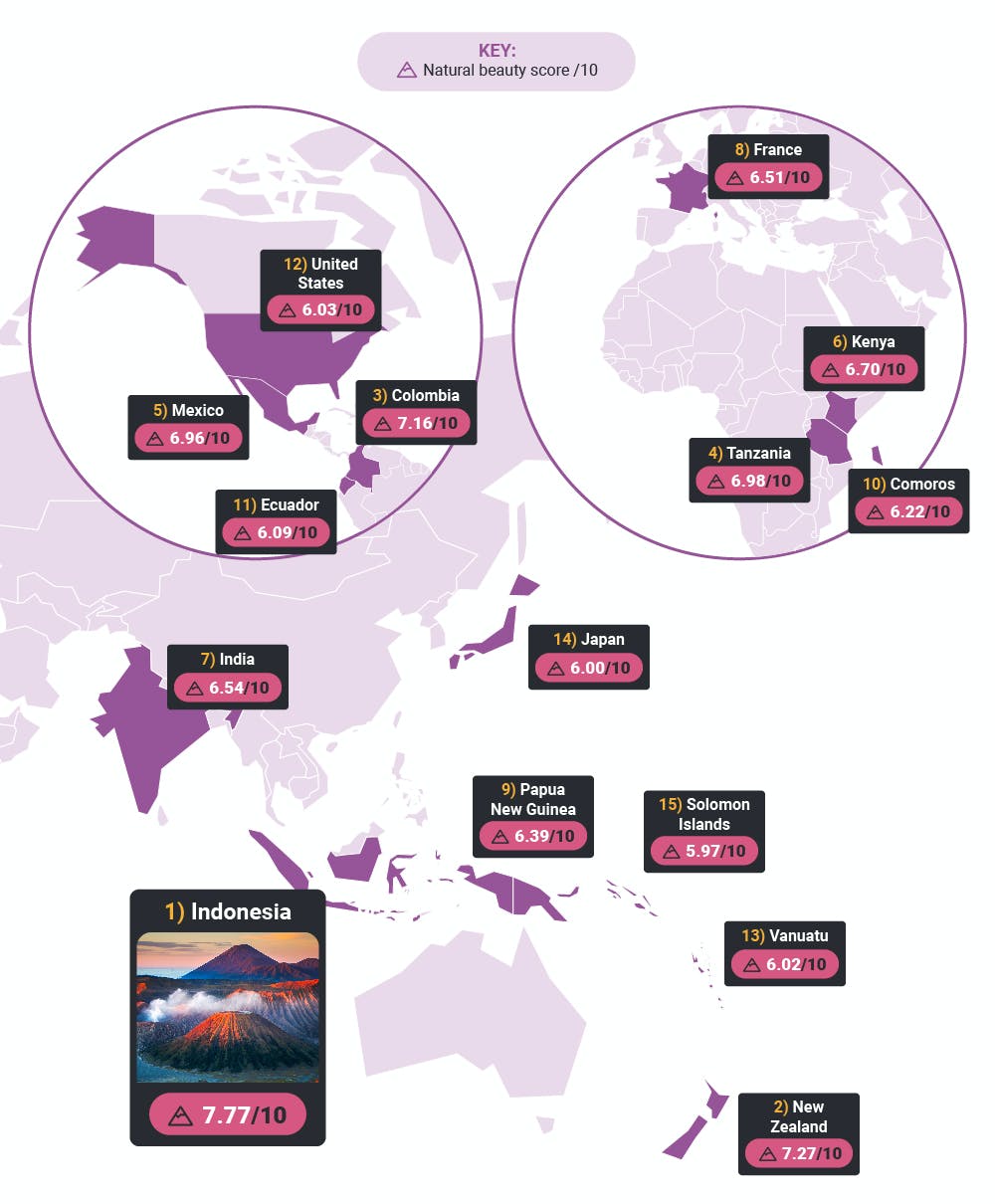 The top 50 most beautiful countries

Use the table below to see the 50 most beautiful countries in the world, according to their concentration of natural beauty spots.

While many of the countries in the top 50 are smaller nations (often collections of islands), a number of larger tourist destinations make the grade too, including the United States, France, Australia, Norway and Thailand.

While beauty is ultimately subjective, it’s clear that these countries have a lot to offer visitors, whether you prefer adventuring in the mountains or relaxing by the coast.

Each country was analysed on the following seven factors. Each factor was calculated per 100,000 square kilometres (with land area figures sourced from the World Bank) before being given a normalised score out of 10 for each factor before an average score across all seven factors was taken. Note that only countries listed on the World Bank were included, with dependent territories being excluded.

The number of volcanoes according to Oregon State University’s Volcano Table.

The number of peaks defined as ‘ultras’ (those with 1,500 metres of prominence) according to Peaklist’s World Ultras Homepage.

The total coral reef area in square kilometres according to the UNEP World Atlas of Coral Reefs.

The number of protected areas (including National Parks) listed on Protected Planet.

The total length of the country’s coastline in kilometres according to citypopulation.de.

The total area of the country that is covered by tropical forests, in square kilometres, according to Mongabay.

The number of glaciers listed on GLIMS (Global Land Ice Measurements from Space).