Our current account experts have looked into how minimum wage around the world has changed over the last 10 years when compared to the cost of living.
Share this guide

Minimum wages are designed to maintain a fair relationship between employers and employees. Minimum wage is an amount that is set by the law, rather than individual wages for different roles at different companies. The living wage is defined as an income that is determined by the average cost to live, for example, in the UK the living wage is almost a whole £1 more per hour than the minimum wage.

Workers in countries with a higher minimum wage compared to the cost of living should have a higher income. But, where in the world is the best wage in comparison to the living costs and how have they changed over the years?

If you’re earning a salary, you’ll need a current account to have it paid into. You can view our best current accounts to find one that best suits your needs.

Our personal finance experts have looked into the minimum wages and living costs around the globe to create the worldwide wage report. The happiest countries in the world have also been identified to explore the correlation between minimum wages and happiness.

The relationship between minimum wage and the cost of living is incredibly important. If there is an imbalance between the two then poverty could become much more commonplace.

Currently, the majority of countries have a lower minimum wage than the cost of living, and therefore, citizens earning the lowest wage in 58.6% of nations are losing money every month. The average amount of disposable income is -£93.76. 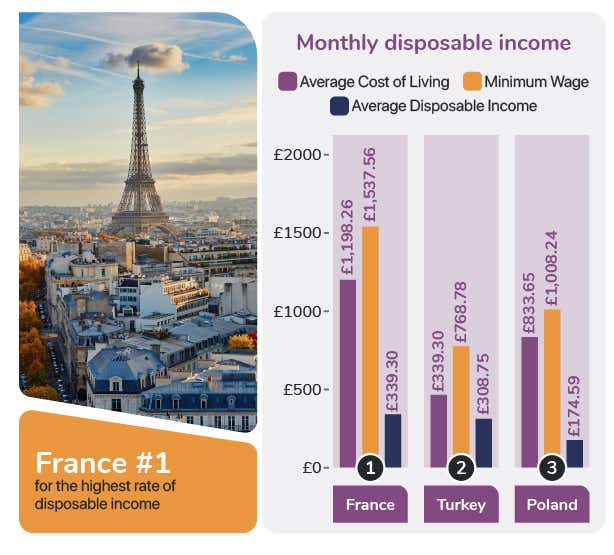 While the Turkish minimum wage is in the top 10 lowest of those ranked, Turks still have the second highest level of average monthly disposable income. This is because the average cost of living in Turkey is incredibly low at £460.03, which is £581.56 less than the average amount across all the nations.

Poland has the third highest level of average monthly disposable income for its minimum wage workers at £174.59, although this is far below the two above it Poles are still some of the best off when earning minimum wage. 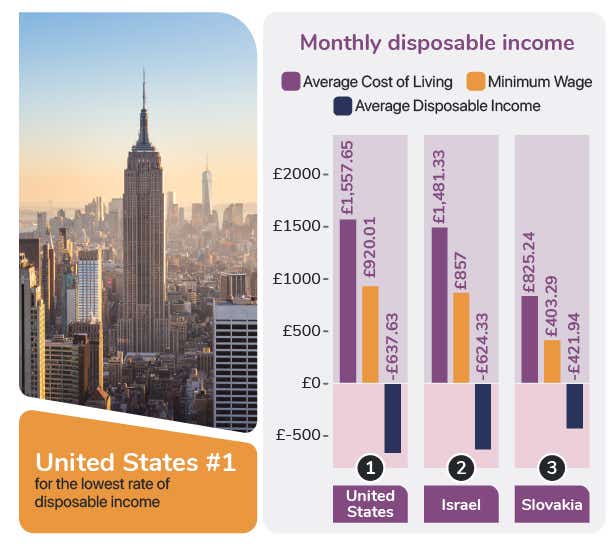 At the other end of the scale is the USA, Americans lose out on a massive £637.63 every month on average when they are earning minimum wage. In the US tipping is much more commonplace, and it is needed to supplement the low wages offered in the land of the free.

Israel has the second biggest deficit when it comes to disposable income each month, workers on minimum wage only earn £857 in the country. This is significantly low when compared to the average cost of living per month which stands at just under £1,500.

The OECD countries with the highest minimum wage 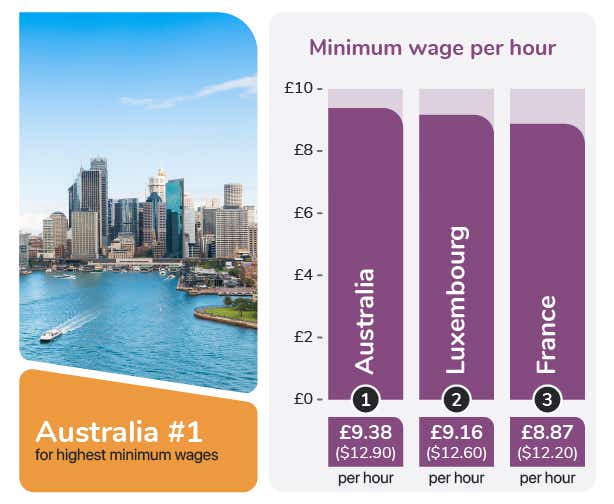 France ranks in third place for minimum wage amongst OECD countries, as French workers have a high minimum wage of just under £8.87. This is £3.40 more than the OECD minimum wage average and 51p less than the Australian value.

The OECD countries with the lowest minimum wage 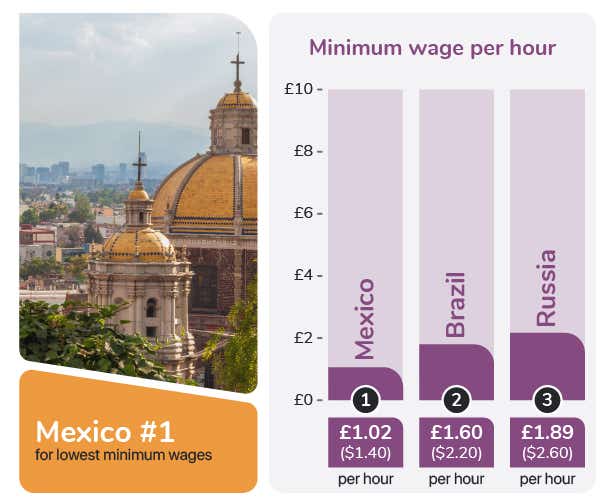 The Mexican minimum wage of £1.02 is the lowest of all OECD countries, this amount is £4.45 less than the OECD average minimum wage, and £8.36 less than Australia.

Brazil has the second lowest minimum wage at £1.60 per hour. Although this means that Brazilian workers earn 58p more per hour than their Mexican counterparts; they are still far below the OECD average of £5.47.

Russian workers earn the lowest minimum wage of any European nation analysed, and the third lowest amount of all the OECD countries. The Russian wage is £3.58 lower than the global average. 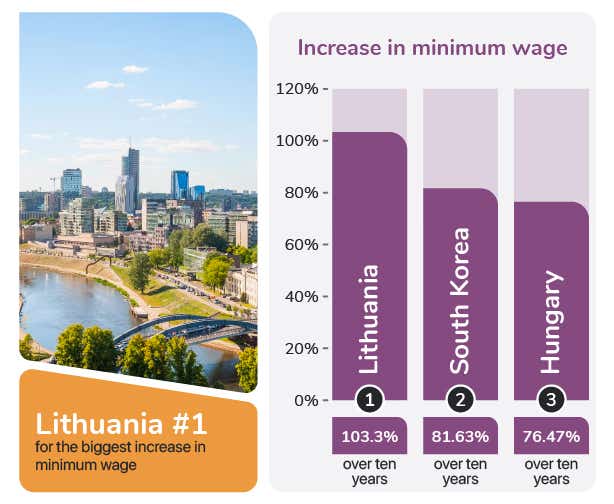 By looking at the difference between the minimum wage today and that of 10 years ago the research reveals which nations have had the biggest increase in minimum wages for their workers.

The Baltic state of Lithuania is the only country in the world that has doubled its minimum wage over 10 years. In total, the country has seen a 103.3% increase from £2.40 to £4.87, despite its increase, Lithuania ranks in 17th place for highest minimum wages in 2020.

From Europe to Asia, South Korea has seen the second-highest increase in minimum wage in the past 10 years at just under 82%. This increase is 54% higher than the average around the world.

The second European nation with one of the highest minimum wage increases is Hungary, where there was an increase of just over three-quarters of its 2011 minimum wage of £2.47. Hungarian citizens now earn well over £4 if they are on the national minimum wage. 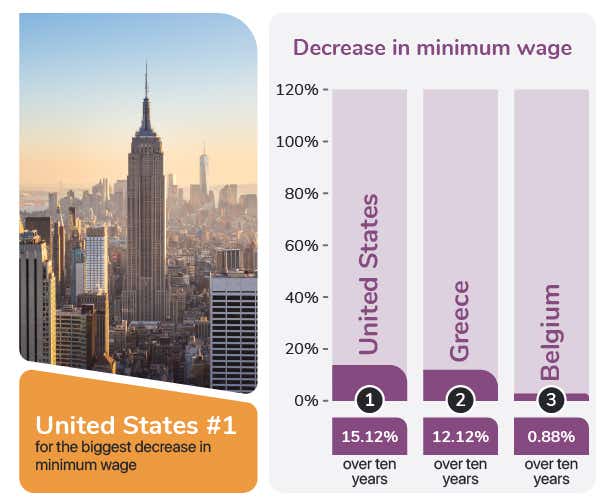 The second-biggest decrease in minimum wage occurred in the Mediterranean state of Greece. 10 years ago the Greek minimum wage was set at £4.80 per hour, but this has decreased by 12.12% over 10 years, the minimum wage is £4.22.

The drop in Belgium’s minimum wage value is nowhere near as drastic as in Greece or the USA, but it has decreased nonetheless. The current minimum wage is £8.14, which is 8p lower than it was a decade earlier. Despite this, the 2020 amount is still the 6th highest in the world.

Top three countries with the highest cost of living increase 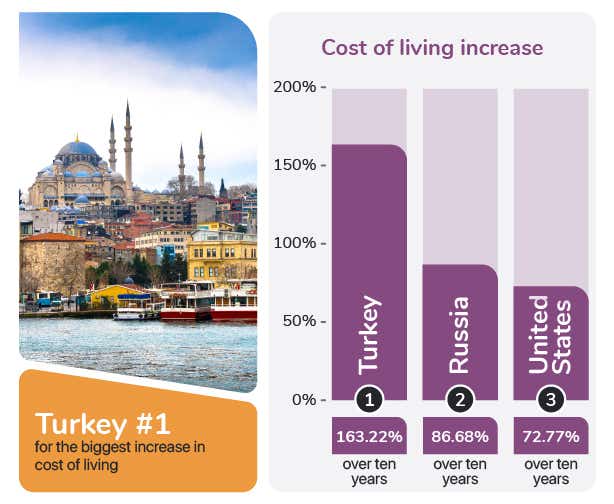 The 10-year increase in the cost of living across Turkey is ginormous, with over 163% higher costs in 2020 than in 2010. The average increase was only 27.3% so this rise is astronomical in comparison.

Living costs in Russia have increased significantly in the last decade according to the World Bank, in total Russian costs have increased by just under 87%. Although this is high it is still significantly less than the Turkish increase, in fact, it is over 75% more of an increase. This increase could be a factor in Russia achieving the second-lowest happiness score of 5.5, again only Turkey had a lower score.

From the most recent World Cup host to their predecessor, Brazil was hit badly financially by the miscalculations of hosting a World Cup and Olympics in two years. During this same time frame, the cost of living has increased massively by almost 73%.

Top three countries with the lowest cost of living increase 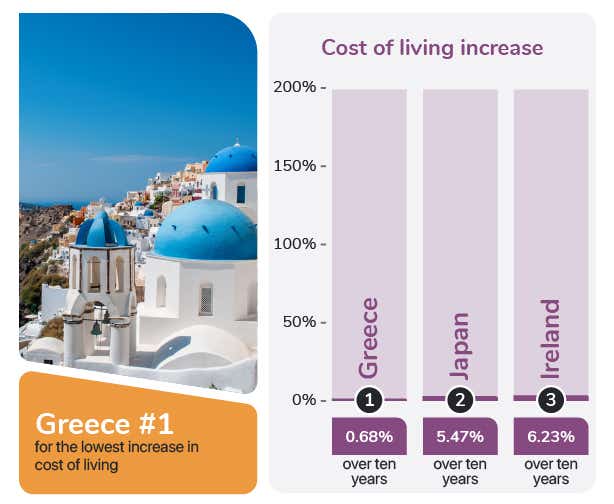 Greece saw the smallest increase in the cost of living with an overall percentage increase of 0.68% over the past 10 years, almost 27% more than the average global cost of living increase. However, it is offset by the decrease in the minimum wage experienced by Greek workers during the same time period.

Japan had the second-lowest increase in the cost of living since 2010, with costs only increasing by 5.47%. Although this increase was almost 5% higher than Greece, it was still low enough for the second spot in the rankings.

Ireland’s increase of 6.23% is the third-lowest in the world, and 21.07% less than the average cost of living increase. Moreover, their costs increased by around 14% less than their geographical neighbour, the UK.