The most beautiful beaches around the world

There’s nothing quite like a trip to the beach. You only have to quickly scroll through Instagram to see thousands of posts from keen travellers taking in the stunning coastal views.
Share this guide

Whether you lay down and stay horizontal the whole time you’re there, spend your time splashing about in the ocean, or maybe you’re the one taking your credit card for spin and buying everyone ice-creams or cocktails - there really is nothing better than a day (or week) on the beach.

With many people desperate to book a getaway, we were curious to discover which beach is the most picturesque; this was achieved by analysing over 26 million Instagram hashtags associated with the world’s most popular beaches and calculating how many pictures were shared per metre of the beach length. The beach with the most Instagram posts per metre has been crowned the most beautiful beach in the world.

The World’s Most Beautiful Beaches

Bali’s Kelingking Beach is officially money.co.uk’s most beautiful beach in the world; covering just 80m of Nusa Penida in Bali, Kelingking Beach has 338,193 photos (and counting) shared on Instagram, meaning for every metre of the beach there are 4,227 pictures taken. Although its beauty alone is enough to make it a popular visitor destination, it’s mostly famed for its cliffs in the shape of a Tyrannosaurus Rex, which make for the perfect photo opportunity.

Australia’s Bondi Beach is second on the list which spans 1,000m of Sydney’s coastline and has 1,777 pictures taken per metre of the beach. Despite the land down under being well-known for its incredible seaside scenery, Bondi is the only Oz-based beach to make the top 20. In 3rd position is Railay Beach in Krabi, Thailand, which is a stunning resort made even more special by the fact you can only arrive there by boat.

Europe is a beach lover’s paradise

Half of the world’s most beautiful beaches in the world are in Europe; Italy’s Tropea Beach is 4th, followed by one of Greece’s most famous beaches - Navagio Beach - in 6th, and North Beach in Tenby, Wales ranking in 7th.

The Portuguese Praia do Camilo is 8th, Spain’s Cala Saona in 11th, followed by the classic British seaside resort, Margate Beach, in 12th. Cala Goloritzè in Italy is at 13th place, the Spanish Cala Gat is 15th. Durdle Door in Dorset, England, which is most famous for its stone arch and pebbled beach ranks in 19th, and the top 20 is rounded off by Spain’s Sitges Beach.

The Top 20 Beautiful Beaches In The World Crowned the most beautiful beach in the world, Kelingking Beach in Bali covers just 80m of Bali ground and for every glorious metre there are 4,227 pictures taken. It’s no surprise that this is a popular photo location when you consider the famous cliffs in the shape of a Tyrannosaurus Rex, plus the stunning backdrop of the bright blue sea and the added greenery from the tropical plants. One of the biggest attractions in Australia for tourists and locals alike, as the crescent-shaped sand beach is conveniently positioned just 7km away from the Sydney Central Business District. Getting its name from the Aboriginal word ‘Bondi’ meaning “water breaking over rocks,” this beach offers both stunning scenery and a vibrant city vibe to its guests. Once a laid back fishing village in Krabi, Railay Beach is now a world-class tourist destination. What makes this place feel even more special is that it's cut off from the rest of the mainland by a row of steep hills, which means you can only get there by boat. With a mix of striking limestone cliffs shooting out of the crystal clear waters and the white sandy beaches this beach is bursting with character. A classic Italian resort bursting with charm, Tropea Beach aptly sits on the Tyrrhenian Sea, which is called the Costa degli Dei, the 'Coast of the Gods,’ making it a fan-favourite for both tourists and locals. As you relax on the beach, you are surrounded by dramatic cliffs with eyes on the historic town centre which sits on top of this epic scenery. This stunning beach is also known as Shipwreck Beach as a result of a ship that was smuggling cigarettes into Greece and washed up at the location in 1983. Since then, it has widely been considered as one of the most beautiful beaches in the country thanks to its huge surrounding cliffs and crystalline waters. One of the most popular tourist destinations on the Island of Oʻahu in the Hawaii Kai neighborhood of East Honolulu, it looks like something straight out of Disney’s Moana. As well as looking good, it also does good; it is the first Marine Life Conservation District in the State, aiming to re-establishing its pristine marine ecosystem that so many people flock to visit. 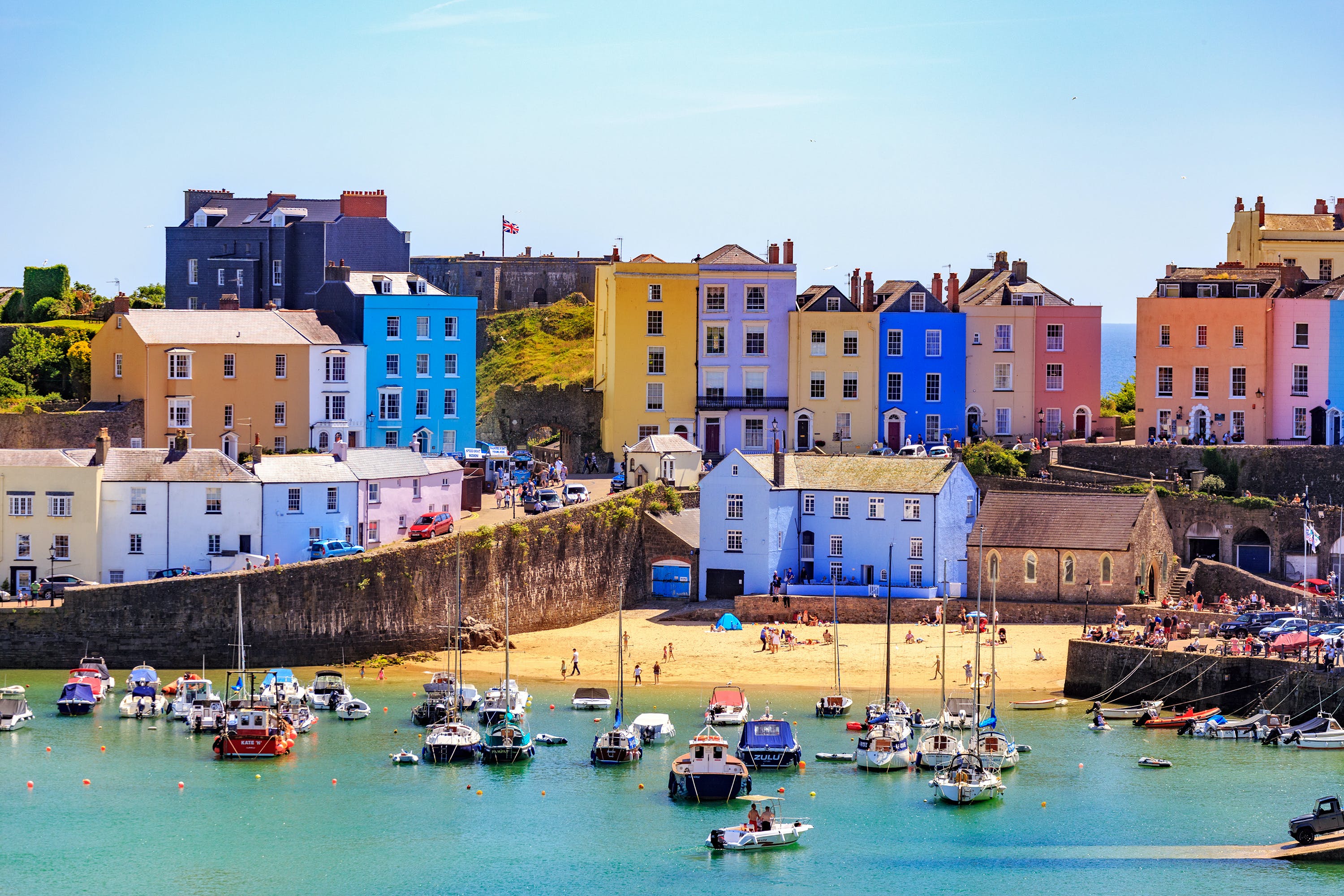 Awarded the prestigious Blue Flag Beach as a result of their strong environmental, educational, safety-related and access-related efforts, this is a slice of Welsh paradise. Enclosed by the pastel-hued townhouses and rugged cliffs, this east-facing beach is a self-made sun-trap. Possibly one of the Algarve’s most iconic beaches, its golden sand and crystal clear, azure waters is an Instagram opportunity waiting to happen. To get your toes in between the sand, you need to climb down the 200 wooden steps winding down through the orange-toned cliffs, which is all part of the spectacle. Unlike all the other beaches on the list, at Boulders Beach you will get the chance to be surrounded by its most famous residents - a colony of African penguins. It’s actually the only place in the world where you can get this close to the special endangered creatures, which is why over 60,000 people visit the beach each year. Well, that and the spectacular seaside views. This beautiful coral beach can only be accessed via a secret, narrow gap amongst the cliffs enclosing the beach, which makes it feel like even more of a treasure. You can soak in the naturally-occuring pools or catch rays on the super soft sand, but if you’re more of a foodie, go to one of the seafood restaurants dotted alongside the coast and watch the surfers while you eat. Like a scene straight off the front of a European postcard, Cala Saona offers visitors the chance to spend all day sunbathing, swimming, and chilling out right up to 9pm when the sun begins to set. Once the clock strikes 9pm, it’s then the ideal location to sip on a mojito and take in the pink-hued sunset. If you had to describe a classic British seaside resort, Margate Beach is exactly that. This beach is pretty much timeless, featuring a tidal pool, funfair rides, and amusement arcades, it’s one to visit for traditional seaside fun and entertainment. Visitors young and old spend the day here and make the most of the several seafood stalls, restaurants, and bars along the seafront. A small-but-special beach, the water features unbelievable shades of blue and green and sits at the base of a deep ravine, which was naturally created by a landslide in 1962 - it’s a prime example of Sardinian paradise. The uniqueness of this spot makes the experience of snorkelling amongst colourful fish even more memorable. One glimpse of Freedom Beach and you’ll finally have the definition of ‘turquoise’ thanks to the tranquil sea. Dubbed as ‘the Pearl of Phuket’ it’s tucked away in a tiny cove that’s surrounded by a tropical jungle with high-rising coconut trees and it offers just two quaint restaurants, so you can embrace the white sand and crystal-clear water while eating Pad Thai. Sitting in the outskirts of Cala Ratjada, this is the second-smallest beach on the list measuring just 40 metres long. Though it’s small, it has a lot to offer; there is a mix of trees and clifftops encircling Cala Gat, the water is crystal clear and the sand is picture-perfect golden, making it every Instagrammers' dream. 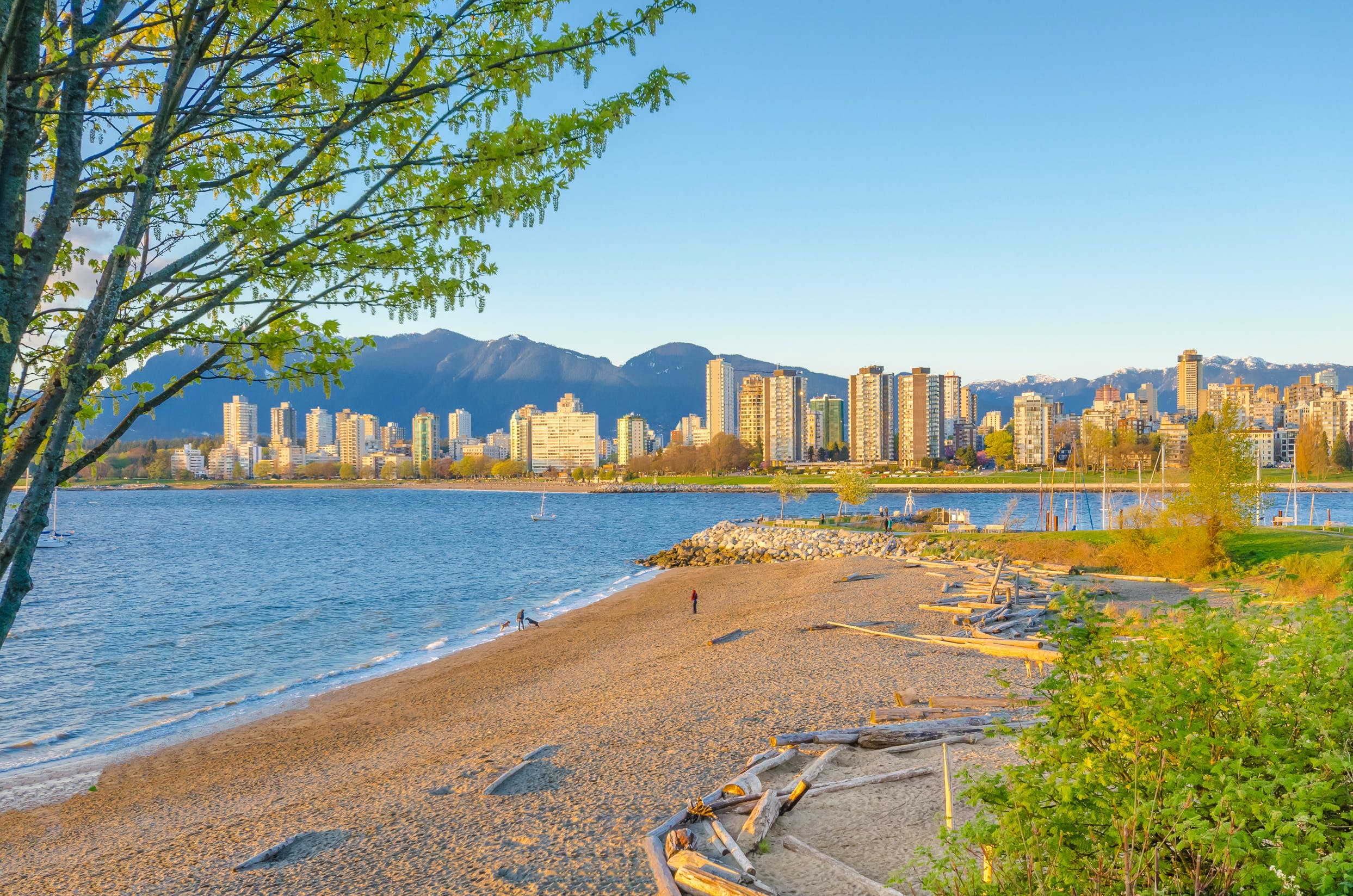 Affectionately known as ‘Kits Beach’ to locals, this beach has something for everyone - from sunbathing to extreme watersports - ‘Kits' has you covered. With designated areas for swimmers, you can enjoy a doggy paddle while embracing the Vancouver skyline and surrounding mountains. Thought to be one of the hidden gems of O'ahu in Hawaii, this is one of those rare tourist attractions that is actually enjoyed by locals too, which tells you a lot about how special it is.  The sand is fine and powdery, the water is crystal clear, and the Mokulua Islands make for a stunning backdrop. You might even see a sea turtle swimming in the water! 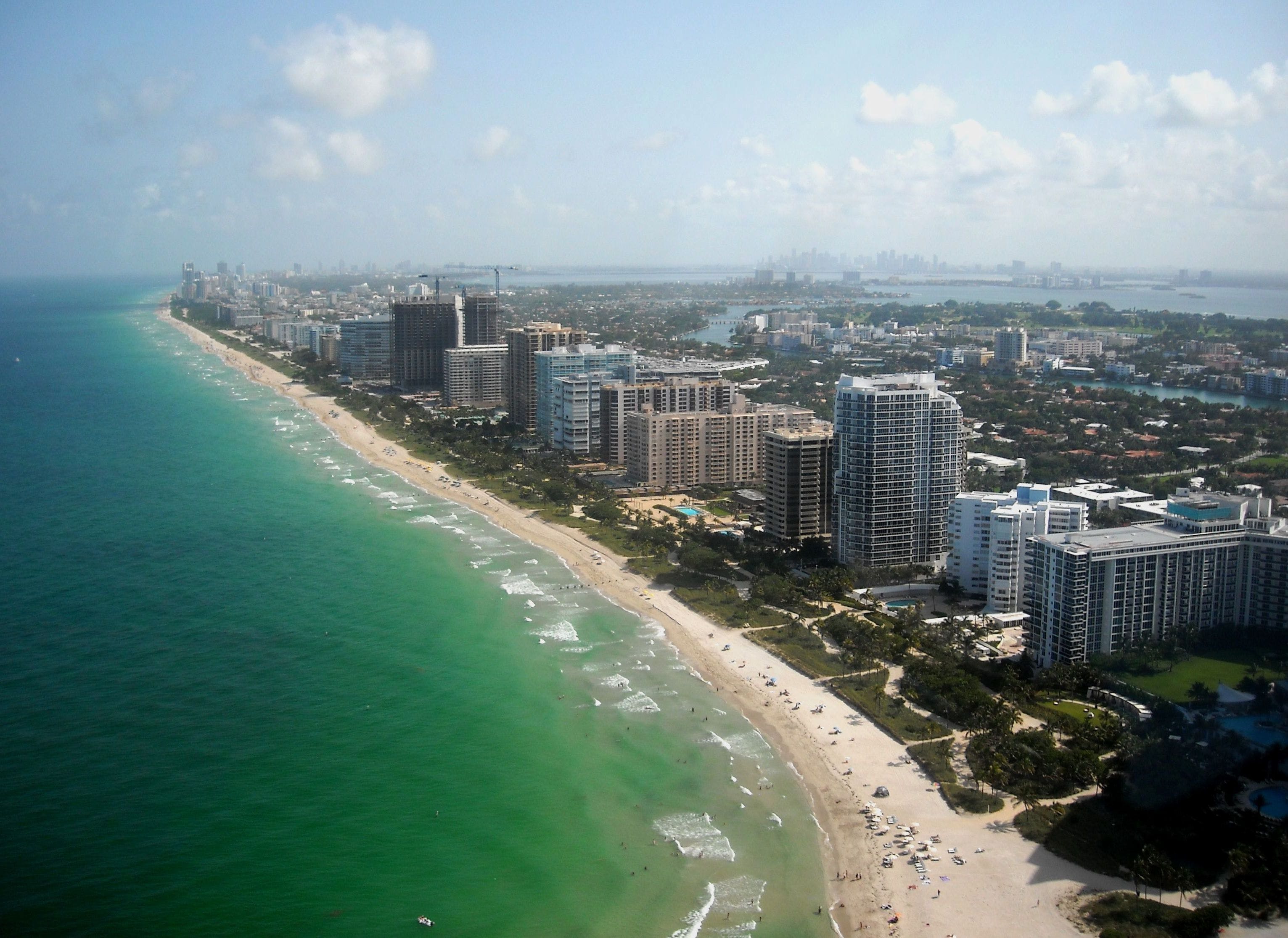 Thanks to Bal Harbour being a small enclave, you’re guaranteed to find a bit of peace and quiet away from the forever buzzing Miami. Locals recommend that you get to the beach early to watch the sunrise and after that you can follow the scenic beach path that runs through Bal Harbour that will guide you to one of the many brunch spots alongside the beach. Home to the most famous stone arch anywhere in the world and it’s probably the most photographed landmark along the Jurassic Coast. Unlike many of the other beaches on this list, this beach is a mix of pebble and shingle which makes it feel even more unique and makes it worthy of an Instagram post. Widely considered to be the perfect family beach in the region of Barcelona, it’s known for its calm waters for swimming with little ones and super soft sand for sunbathing. Sitting on a cove on the edge of the town also gives you great balance between the tranquility of the beach and the atmosphere of the bars and restaurants that are just a short walk away.

The UK’s 10 Most Beautiful Beaches

The most beautiful beach in the UK is Tenby North Beach in Pembrokeshire, Wales; it has recently received the stamp of approval from Hollywood star Luke Evans who called it “a beautiful place” after filming there. The beaches's beauty has been further validated by the 343 pictures taken per every metre of the beach.

Meanwhile, the other Welsh beach featured on the list is Caswell Bay Beach in 6th position. Although beaches in England and Wales dominate the top 10 list, the Scottish Achmelvich Beach -  a popular spot for fishers, kayaks, and windsurfers - ranks in 8th position.

The USA’s 10 Most Beautiful Beaches

Taking the top two positions are Hawaii-based Hanauma Bay and Lanikai Beach, while Florida-based Bal Harbour Beach takes the 3rd position. Five of the most beautiful beaches in the USA are in California, with Sand Dollar Beach and Coronado Beach taking 4th and 5th place respectively, and Baker Beach, Santa Monica Beach, and Butterfly Beach placing at 8th, 9th and 10th.

So, if you’re planning your next trip, remember that you can use 0% purchase credit cards to make large purchases, meaning you can spread the repayments of your getaway and reduce the amount of interest you pay. You’ll also be covered for any purchases between £100 and £30,000 by Section 75 of the Consumer Credit Act which will help give you peace of mind when booking your next beautiful getaway.

We researched and compiled a list of the most popular beaches in the world, their location and the length of each beach. We then used Instagram hashtag data to find how many images were associated with each beach and divided that number by the number of metres that beach covers to find which one had the most photos taken per metre. Data correct as of June 2021. Beaches measured using Google maps measurement tool, following each point of the shoreline. The beach with the most pictures taken per metre is then crowned the most beautiful in the world.