Even pre-pandemic, getting a table at your favourite pub could be a challenge. But after several months of closures, it is predicted that when our favourite locals reopen indoors on May 17 things may be a little busy.
Share this guide

If you’re keen to find the best place to get a socially distanced pint this summer, we have studied government data to discover which area in the UK has the best pub to people ratio.

If you are planning to head out to the pub in the coming weeks, it’s worth remembering that many businesses are still only taking cashless and contactless payments, so don’t forget your debit card. Some banks offer cash incentives for switching current accounts, so you might want to compare current accounts before heading to the pub.

In the UK there are around 47,000 pubs to serve the 66 million people living in the United Kingdom. That’s approximately 1000 pubs per 1.4 million people.

Naturally the number of pubs and people fluctuates across the UK, so which towns and regions have the most pubs per people? 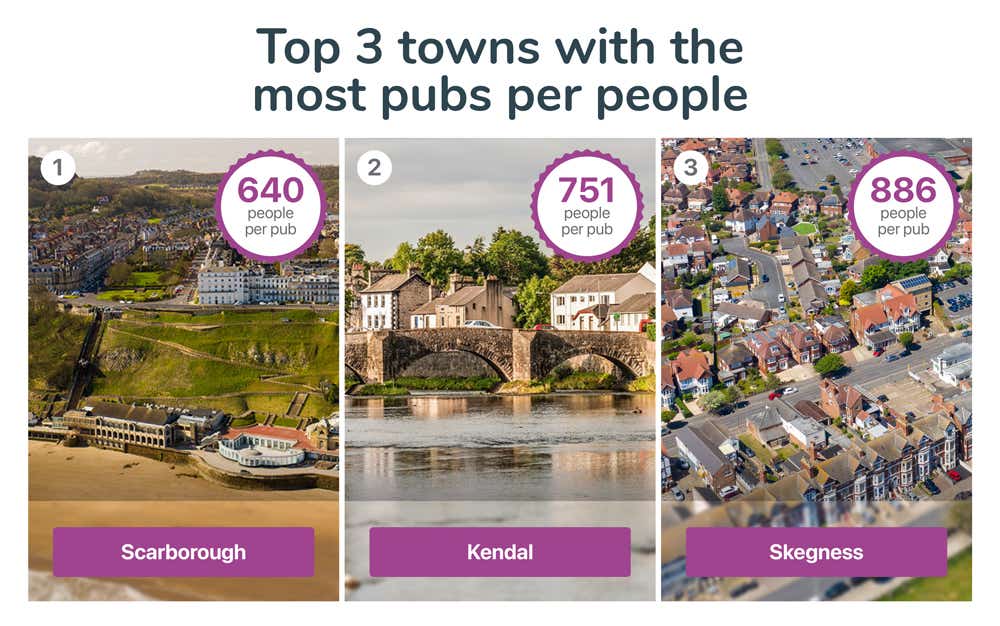 Taking the top spot on the rankings is the seaside resort of Scarborough in North Yorkshire with 640 people per pub. Scarborough attracts a lot of tourists, however, the population of people who actually live in the town and surrounding district are just over 108,000 and they are catered to by 170 pubs.

Second place in the rankings is the Cumbrian historic market town of Kendal, which is the major settlement in the South Lakeland District. Kendal is home to 105,000 residents who are catered to by 140 pubs - this equates to 751 people in each pub. Despite losing many pubs in recent years such as the Cock and Dolphin, the Kendal Bowman, and the Sawyers Arms, the region is clearly still thriving.

Another east coast seaside town comes in third place for the lowest pubulation density as there are only 886 people per pub in Skegness and the rest of the East Lindsey district. Although like many UK seaside towns Skegness has been in decline since the mid 20th century, the rise of staycations have increased interest in visiting and for those who do make the trip there may have a higher chance of getting a spot in the pub. 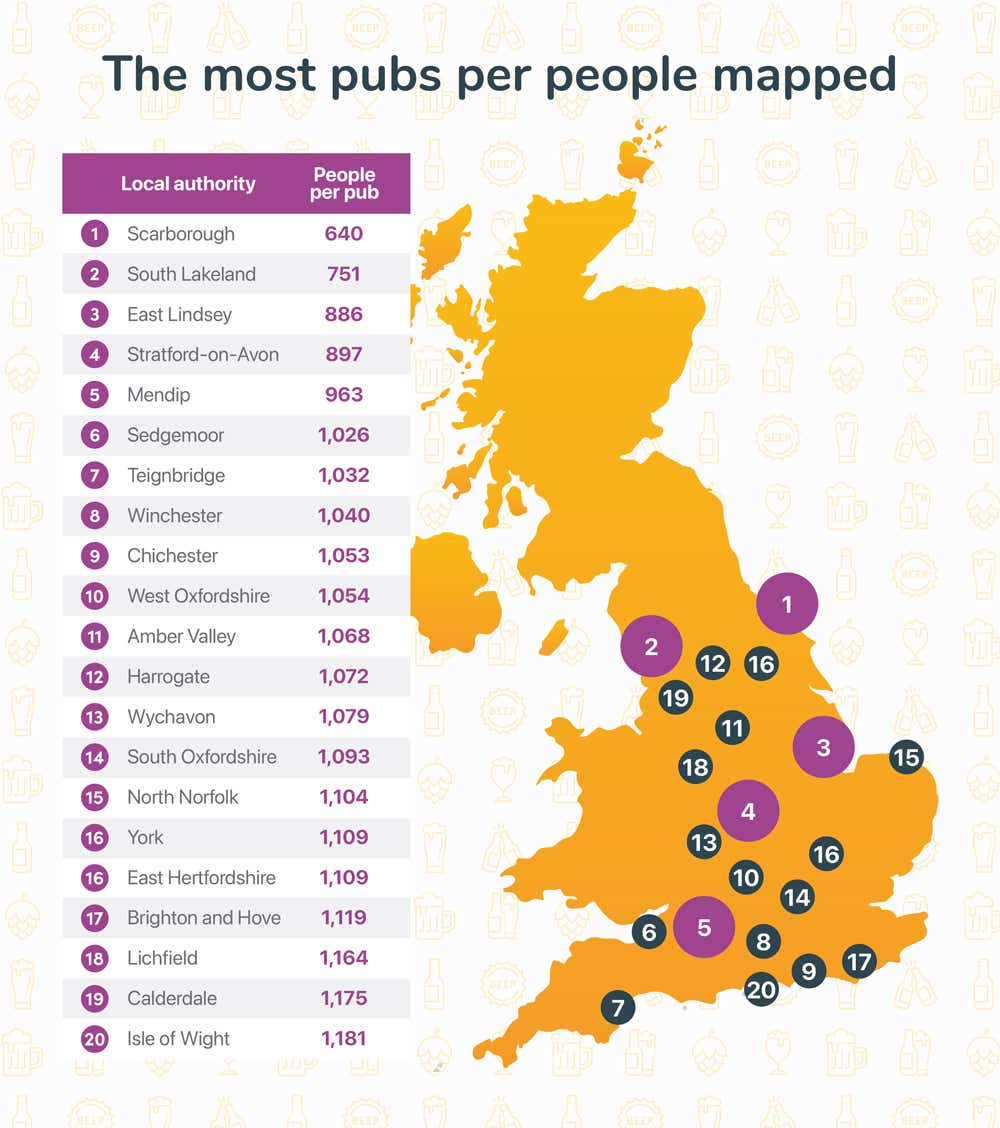 Top 3 towns with the lowest number of pubs per people

Unfortunately, not everyone in the country is lucky enough to live in an area where there is a small number of people for every pub, and these are the areas where you will have the most local competition for a table. 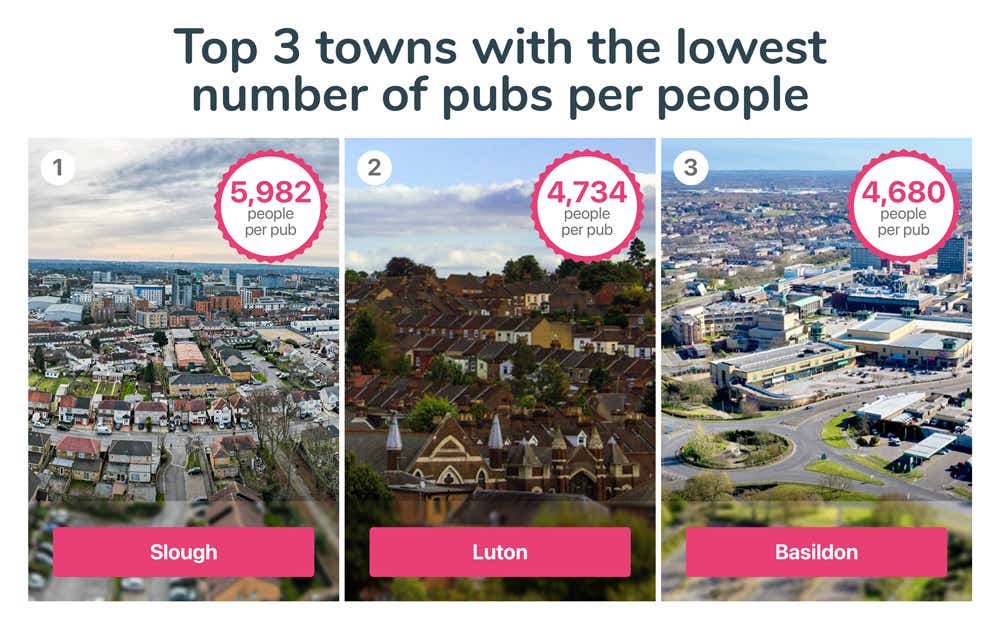 The town with the unwelcome title of having the most people per pub is Slough at almost 6,000 people per pub. With just 25 pubs in total in the Slough area, this may not be the best place to head to for your first pint inside the pub.

Luton takes the second spot for the lowest number of pubs per people with just 45 pubs serving a population of over 200,000. That’s a very crowded 4,734 people per pub.

With over 185,000 residents in Basildon and just 40 pubs in the area, the Essex town is the third-worst place for the pub to people ratio. With approximately one pub per 4,680 people in Basildon, you may want to reserve a table if you’re hoping to go for a pint indoors in the coming weeks. 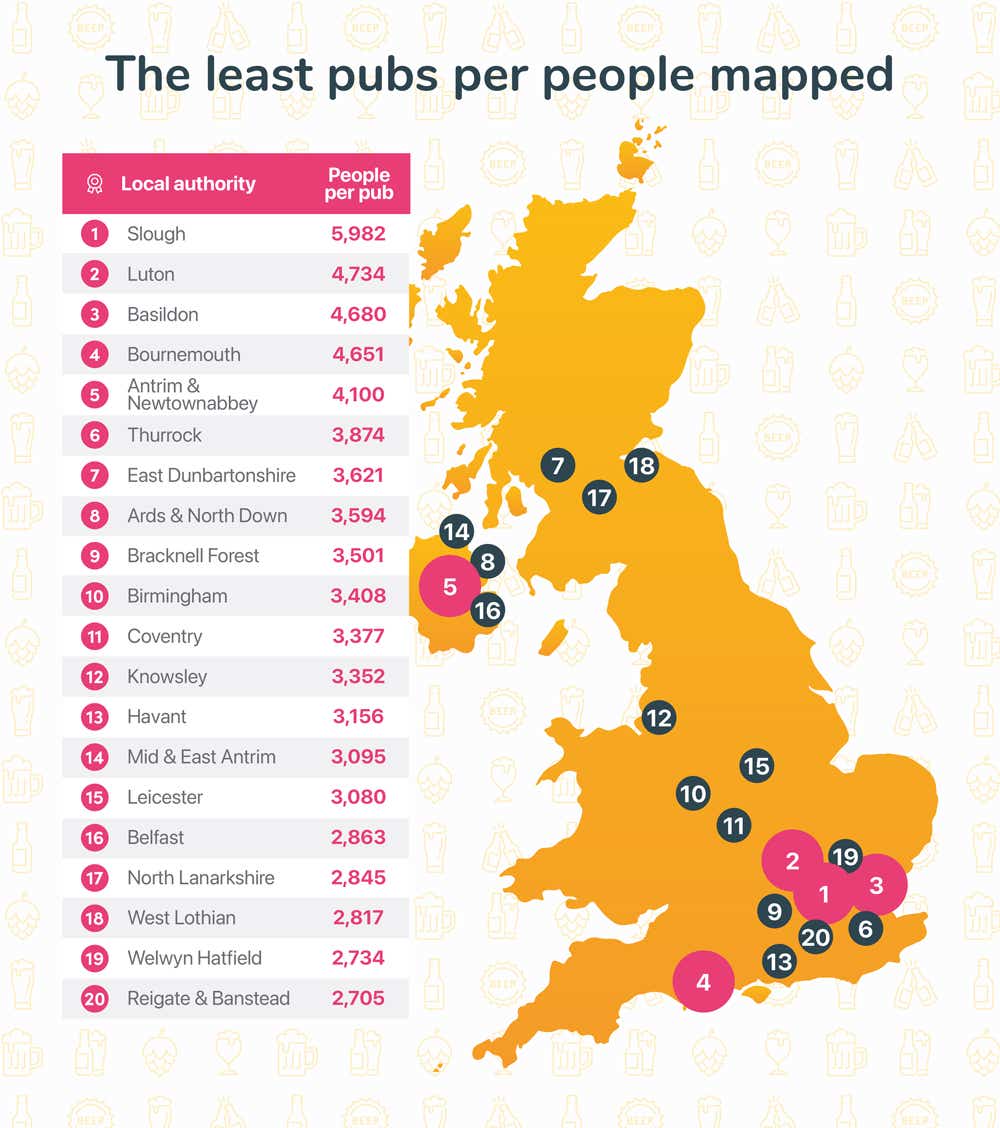 Compared to the rest of the country London attracts a vast number of tourists, and therefore the pubulation density is less applicable to the capital than it is everywhere else. Consequently, we have ranked the London boroughs by the number of pubs to see where in the capital you are most likely to find a place for a drink.

The boroughs closer to the centre of the city tended to have the most pubs, with all of the top five bordering the City of London area. 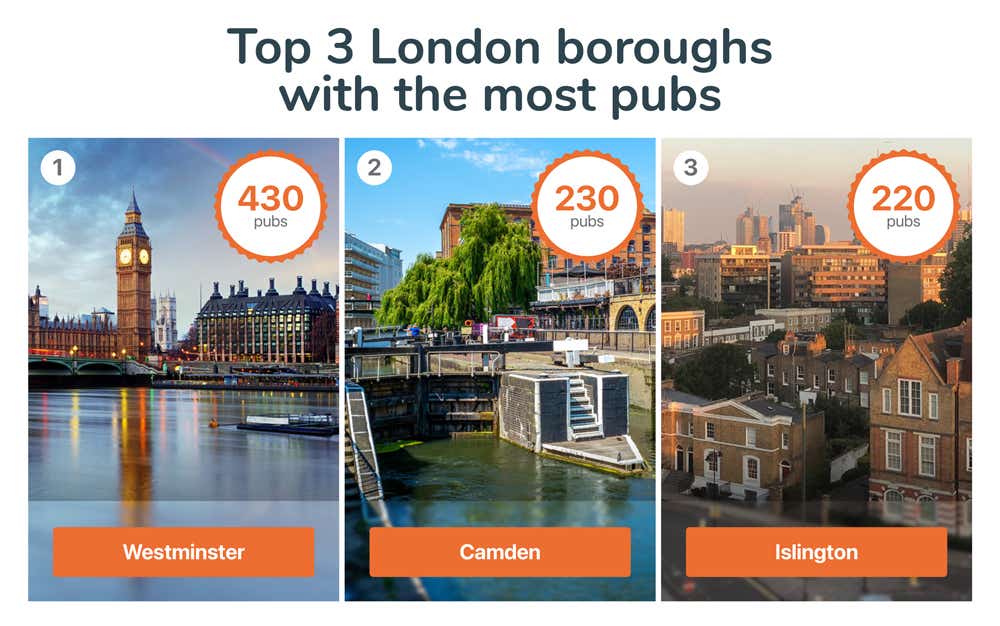 The borough of Westminster has one of the highest concentrations of national landmarks and tourist destinations of any location in the country, and on top of that it can now boast the highest number of pubs in London with 200 more than its next closest rival.

Despite having far fewer pubs than Westminster the borough of Camden ranks second place with 230. Camden is famous for its market, but it is the commerce of alcoholic beverages that has propelled it to the higher echelons of this list.

Islington is home to Arsenal football club, but unlike the Gunners it is competing towards the top of the table. Ranking third by virtue of its 220 pubs, Islington narrowly missed out on second place but was comfortably ahead of the fourth place region of Hackney. 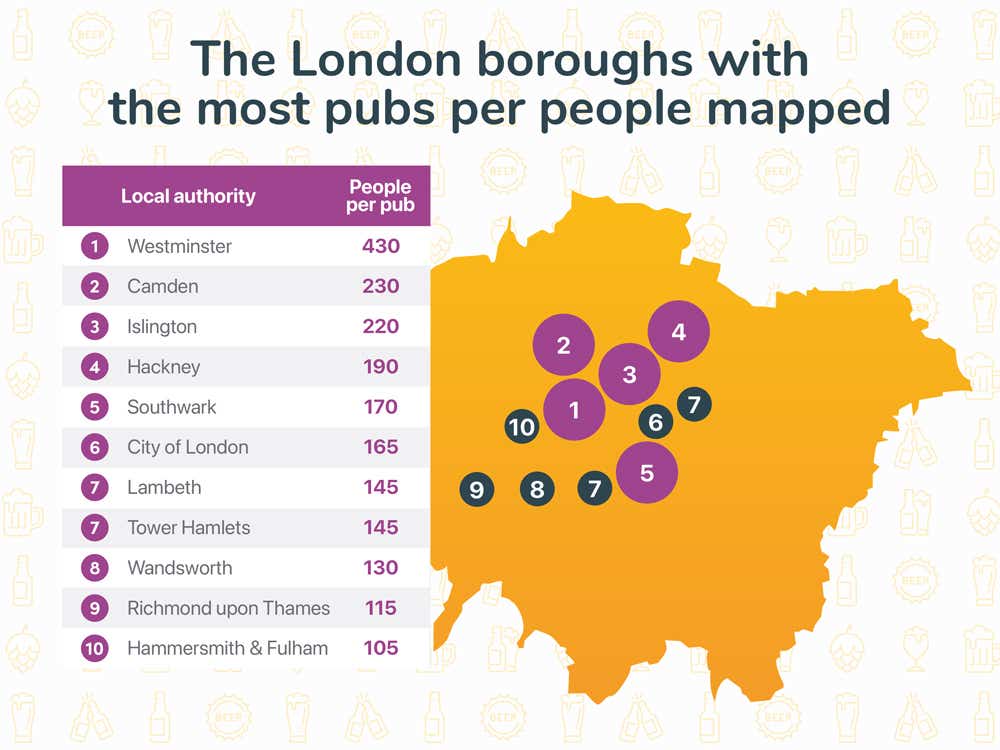 Price of a Pint

Finding room in a pub is one thing but once you’re in there, where in the UK has the cheapest beer? By looking across the biggest towns and cities in the country we have been able to rank which places offer a pint of beer for the cheapest average price. 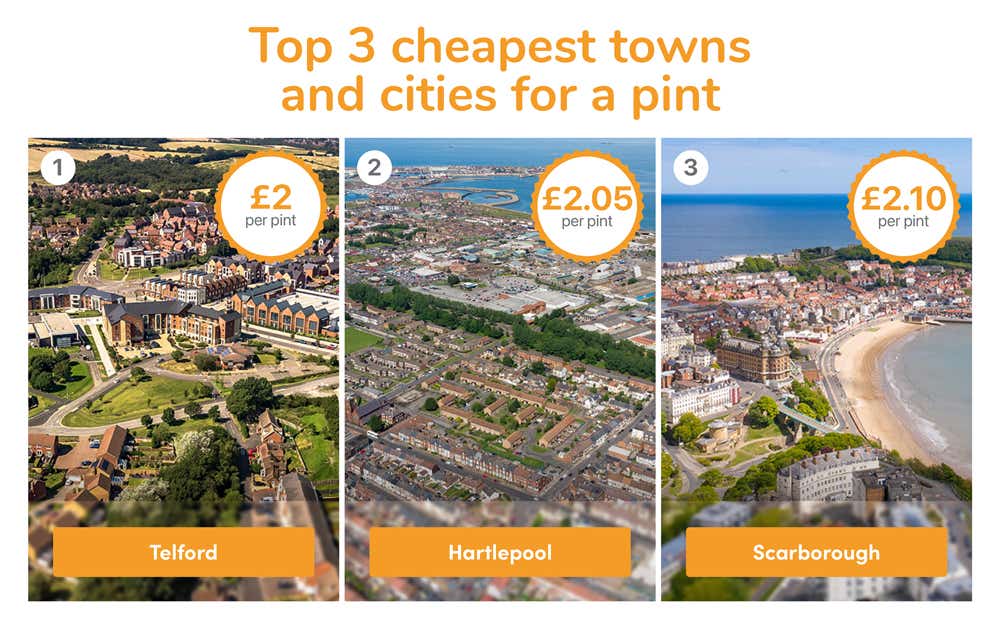 The Shropshire town of Telford is the place with the cheapest average cost of a pint in the entire country. In this young town the average price of a pint of beer is a mind-bogglingly low £2.

The distance between Hartlepool and Telford is around 170 miles, but the price of a pint is much closer, with the North East coastal town missing out on the top spot in the rankings by a mere five pence. One of Hartlepool’s most popular pubs is ‘The Tall Ships’ named after the tall ship racing that took place off the coast of the town in 2010.

As previously mentioned, Scarborough has a high number of pubs compared to the population, but we can also reveal that it is the town in the country with the third-lowest average price of a pint. The £2.10 that the Yorkshiremen will part with at pubs such as the Leeds Arms, the Scarborough Arms, and The Stumble Inn is a paltry amount compared to other areas of the country. 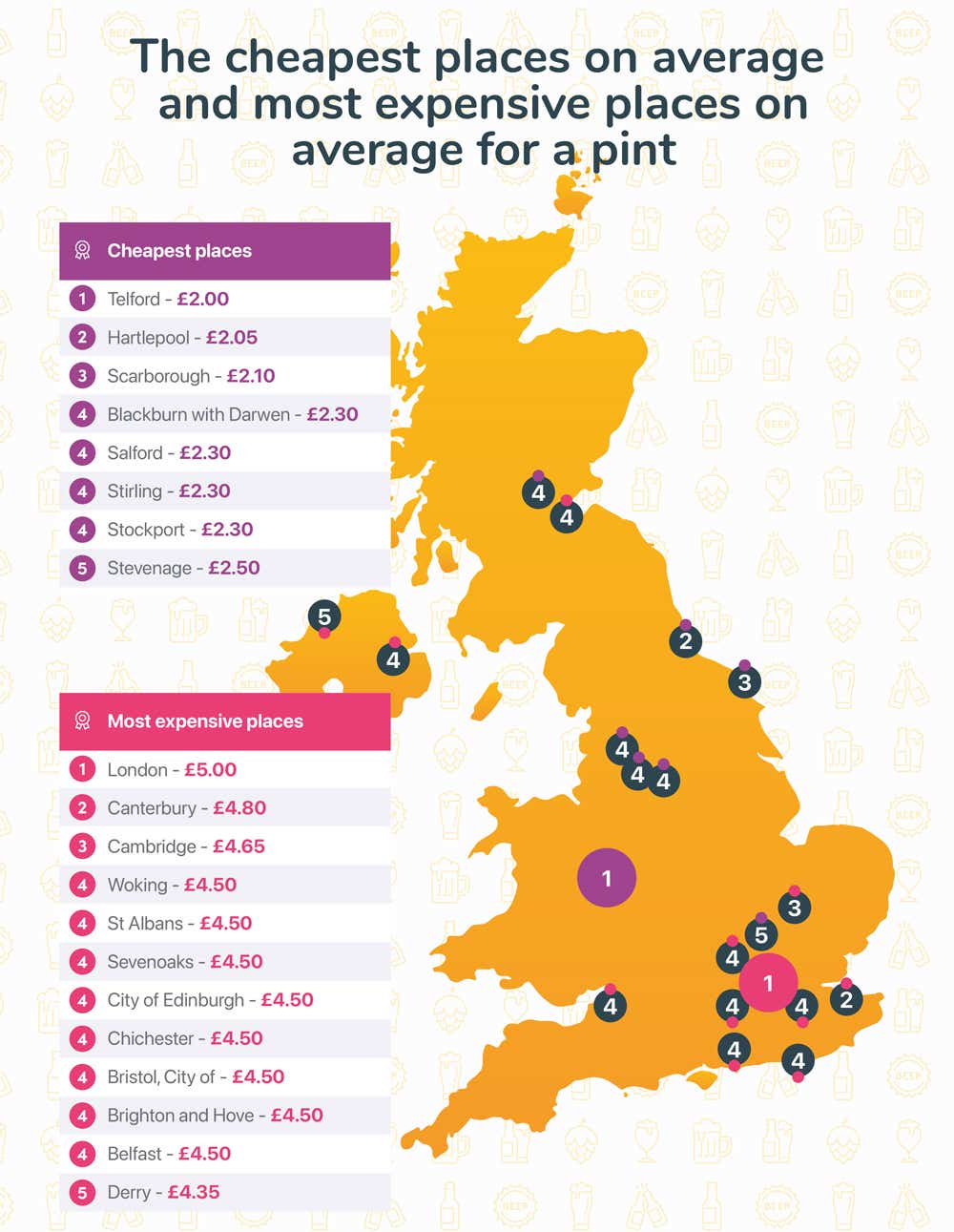 The most expensive towns and cities for a pint

Unsurprisingly the most expensive place for a pint in the country is the capital, in London it costs on average £5 for a beer, and in many central areas of the city it is far more than this. This means that you could buy two and a half pints in Telford for the same price that Londeners will pay for one.

In the other constituent nations the capitals of Scotland and Northern Ireland are the most expensive cities as both Belfast and Edinburgh charge an average of £4.50 per pint.

Price of a Pint:

We used Numbeo data for each individual town and city on the list to discover which areas on the list we had established for the concentration of pubs had the cheapest average cost of a ‘draught domestic beer’.