Our car insurance experts at money.co.uk have teamed up with US data scientist and music lover, John Miller to analyse lyrics from over 16,000 country songs and explore the relationship between country music and trucks over the past 50 years. 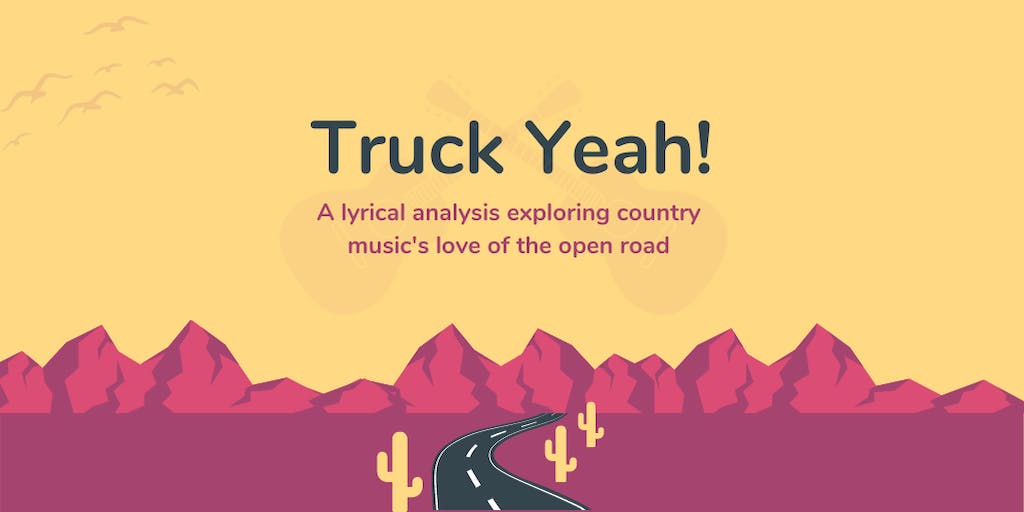 If country music has told us anything it’s that the great American highway isn’t just a way to get from A to B, it’s a way of life, and there’s no better way to tear it up than cruising in a truck.

Whether you’re hauling heavy equipment, or just rolling through town, the American truck is a staple of country living. But with country stars trading horsepower for hybrids, are the days of the 4x4 numbered?

We’ve uncovered the greatest truck songs, the biggest country music petrol heads, the best year for trucks and the surprising rise in popularity between trucks and female artists, along with much, much more.

So, park up, crank the window down and put on your cowboy hat as we reveal everything there is to know about country music and trucks.

Yes. A lot. Analysing over 16,000 country songs, across five decades, we found that trucks feature in just over 4% of all country songs.

To put that into context, it means there’s roughly 660 country songs dedicated to trucking, which would take you around 2,600 minutes or 43 hours of non-stop listening, to hear them all!

When did country music get ‘truck fever’?

Despite the stereotype, country music’s obsession with trucks is a relatively recent phenomenon, with truck songs only really taking off in the 2000s.

In fact, our study found that the past two decades has seen the biggest boom in truck related country music, with 6.25% of all country songs made from the year 2000, referencing them, compared to 1% across all previous years.

Motor aficionados will be happy to know that the 2010s were the biggest decade for trucks in country music on record, and last year (2019) was the biggest single year for truck fans, with more than one in 10 (11%) of all country songs released that year featuring a 4x4 reference.

Coming off the biggest trucking year in history, 2020 has seen a sharp decline in the proportion of songs referencing them, nearly halving. Could this mean country stars are trading their Broncos for Teslas? Only time will tell.

In our deep dive of over 200 artists and 933 hours of country tracks, Arkansas’ Justin Moore came out as country music’s biggest truck fan, with nearly a third (29.6%) of all his songs containing references to trucks.

While Justin is ‘King of the Road’, he’s in good company. More than 35 artists featuring truck references in over 10% of their songs, including household names such as Jason Aldeen, Tim McGraw, Luke Bryan, Blake Sheldon and Kenny Chesney.

Flying the flag for female truck lovers, Miranda Lambert was the only female artist to crack the top 20 for overall truck references in songs, taking the number 16 spot across all artists, with a massive 17% of her songs featuring references to trucks.

The sun’s beating down, you’re behind the wheel in your ’78 Chevy and you really want to blast some tunes fitting for your pride and glory as you drive to the football game.

Well we’ve got you covered, here are the songs that have the most truck references in them.

When it comes to getting the most bang for your truck, Corb Lund’s 2005 hit The Truck Got Stuck takes the top spot, with an impressive 29 truck references throughout the song. In fact, the word ‘truck’ makes up 6.6% of the entire song’s lyrics, making it a ‘must have’ on our country driving playlists.

The biggest truck songs (based on Spotify streams)

While the boys may sing the most about their rides, the honour of most popular song to feature a 4x4 actually goes to Carrie Underwood, with her monster hit Before He Cheats raking up more than 200 million Spotify streams, dwarfing the competition.

However, fans of the country singer may be quick to point out that the song references Underwood taking a baseball bat to her partner’s truck as revenge for his infidelity, so let’s hope he’s got car insurance for it.

If you’re after a hit song that doesn't feature a truck being destroyed, then Blake Sheldon, Keith Urban, Alan Jackson and Miranda Lambert have you covered, with their hits collectively pulling in more than 200 million streams online.

When it comes to the truck brands Chevy and Ford reign supreme, with more references than any other manufacturer.

Ford and Chevy were referenced roughly the same amount as each other, but left the competition in the dirt, as both brands were more than twice as likely to be sung about than others.

Battle of the sexes: The rise of female truckers

Our research found that male country singers love their trucks the most, being more than twice as likely to reference them in songs.

However, female country stars seem to be slowly catching up, with the proportion of truck references from female artists rising each decade, reaching their highest ever number in 2020.

Leading the charge for female motorists is Texan superstar Miranda Lambert, whose songs feature trucks almost twice as much as any other female artist, along with creating one of the most streamed ‘truck’ songs ever in Automatic.

There you have it, country stars are truck crazy and while they’ve gotten more petrol obsessed in recent years, if 2020 is any indication it could all be about to change.

But, whether you’re a Bronco driver, a Chevy fan, or a ‘little red wagon’ owner, make sure your car insurance is in tip top shape before you take it out in the country, as you never know when Carrie Underwood might show up.