Earlier this year, Prime Minister Boris Johnson announced that sports fans may be able to return to their seats later this year, albeit with reduced attendances. With this in mind, money.co.uk took a look at how much franchises are set to lose at the concession stand. 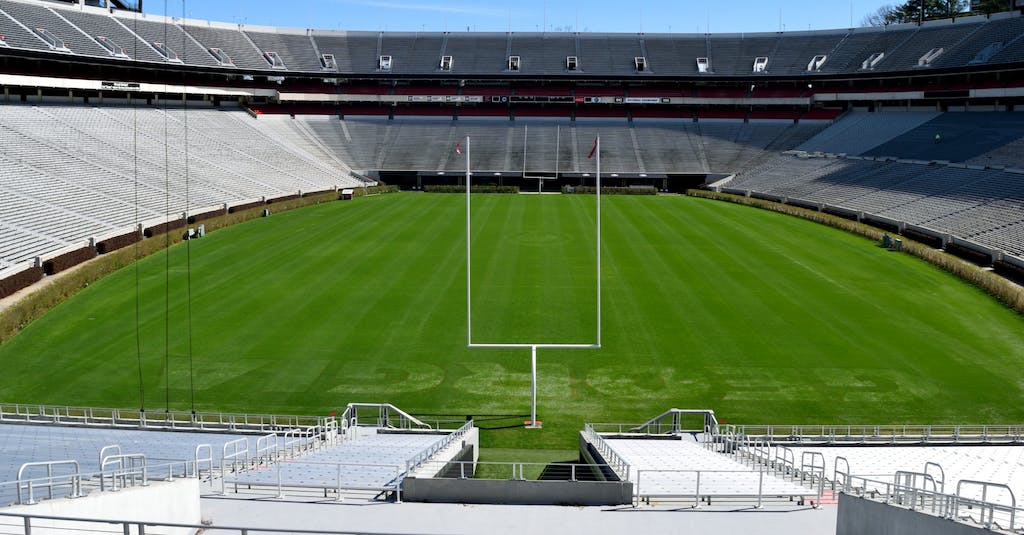 The coronavirus (COVID-19) pandemic has affected many live events. Music gigs, theatres, and sports leagues have all been suspended for months, with some cancelling performances and seasons outright.

However, with the announcement that sports fans will be able to return to their seats later this year, albeit with reduced attendances, money.co.uk took a look at how much franchises are set to lose at the concession stand.

We examined two sports with the biggest risk of losing money from fan’s food orders, American football, and association football.

For association football, we looked at the cost of a pint of beer, a cup of tea, and a pie at each of the Premier League team grounds, and then, using their estimated attendance numbers, we worked out the maximum revenue generated per game and per season.

For the gridiron, we took the cost of a beer and a hot dog, again taking the estimated attendance numbers and working out the revenue for the eight home games in a season, not including playoffs.

We subsequently looked at what the reduction in takings would be with 50%, 40%, 27%, and 20% attendance rates. We used these numbers because a recent study suggested Premier League stadiums could accomodate for 27% of fans with social distancing, and the recent announcement from the New England Patriots that they were aiming for 20% attendance this season. 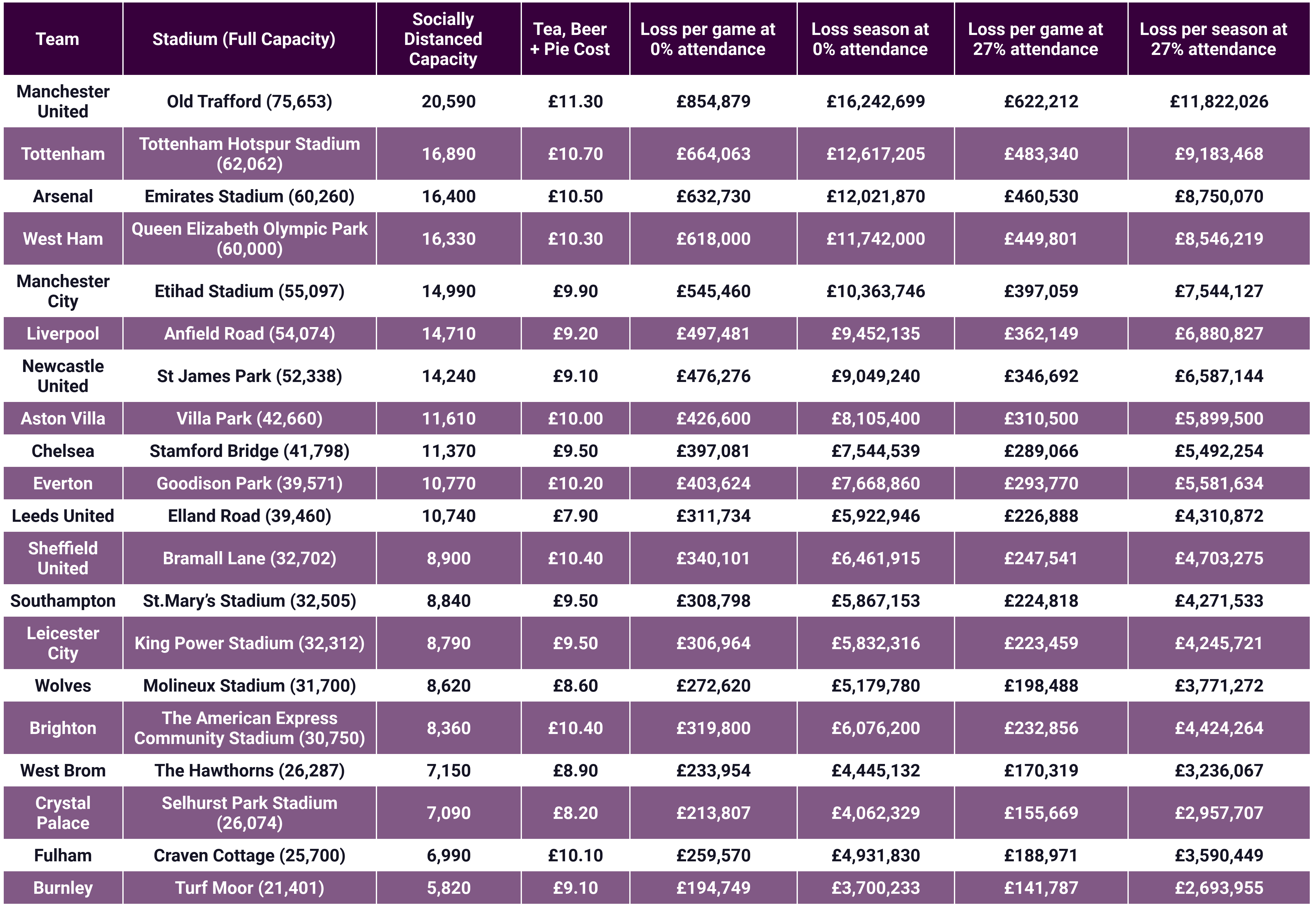 Manchester United finished top of the table in terms of beer, pie, and tea costs, racking up at £11.30 in total. With Old Trafford comfortably the biggest stadium in the league, it means that United stand to lose the most money on concessions this season, even if 20,590 fans can return this season. With only 27% attendance forecasted, the total losses are an eye-watering £622,212 per game or £11,822,026 over the course of a season.

London clubs take the next few spots, as the North London derby is contested at the concessions stands as well, with Tottenham racking up losses of £9,183,468 over the season were you to discount sales from food and drink, compared to £8,750,070 for rivals Arsenal.

The three clubs with the smallest stadiums in the league unsurprisingly stand to lose the lowest totals from there being fewer fans this year, albeit more important revenue for them overall. Newly promoted Fulham and Leeds both feature in the bottom three of our table, due in part to their small stadiums, with Craven Cottage only holding 6,990 potential concession buyers with social distancing and losing £188,971 per game as a result.

The price of all three concession items averaged out at £9.67 across all Premier League teams, with the league's estimated losses for the season totalling at over £114,000,000 and costing each team on average £301,296 in losses per game.

On 22/09 it was announced by Prime Minister Boris Johnson that plans for fans to return to football stadiums from 1 October will not go ahead. Following this, the experts at money.co.uk assessed the financial impact on the EFL's other leagues. 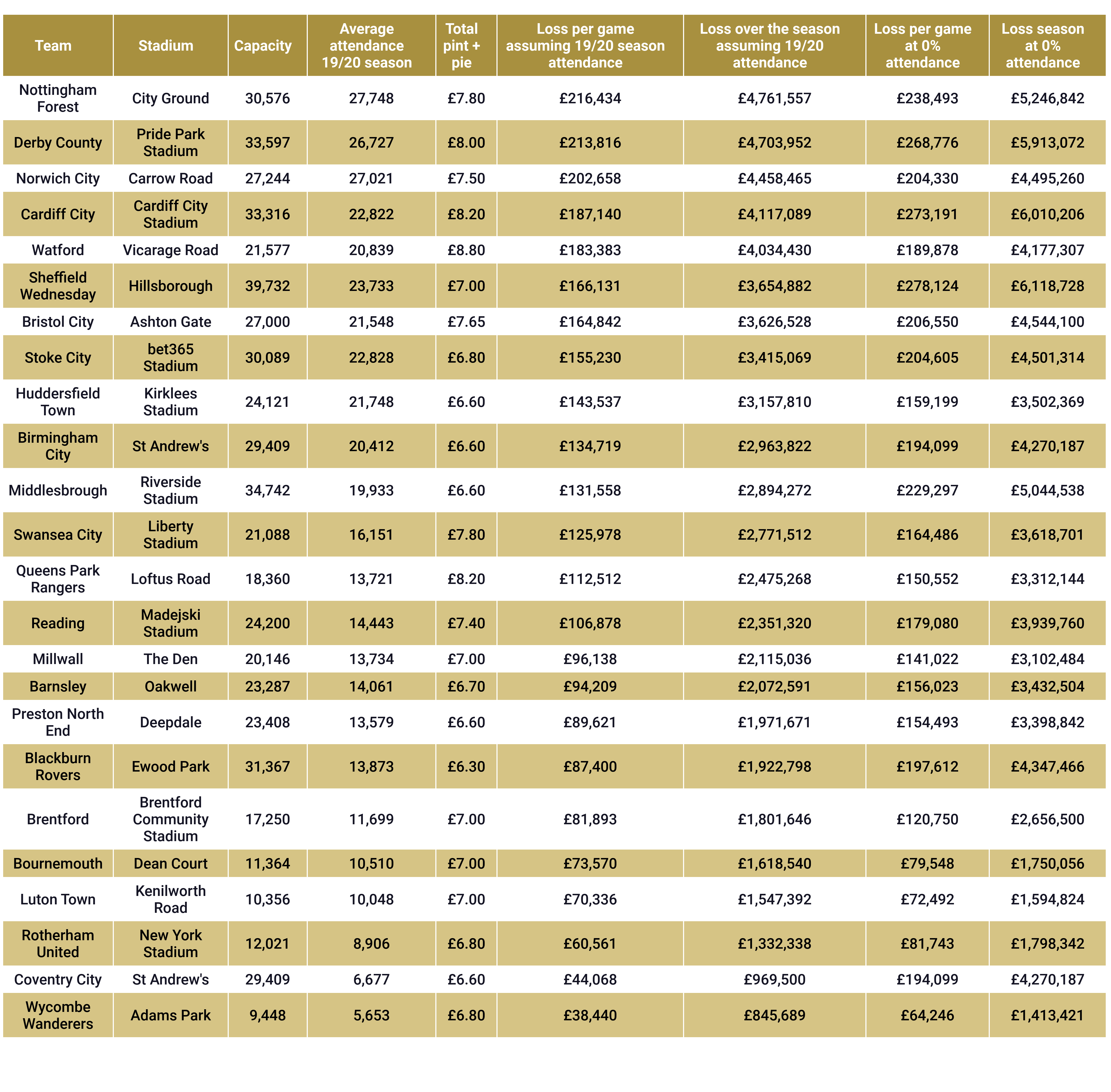 Derby County and Norwich City are also expected to lose over £4m if fans can't return this season.

At the other end of the league are Wymcombe Wanderers, who thanks to their stadium's smaller capacity, are set to lose around £38,440 per game and £845,689 over the season.

Collectively, it is estimated that Championship clubs could lose over £2.9m per game without fans and an eye-watering £65m if fans are unable to return all season. 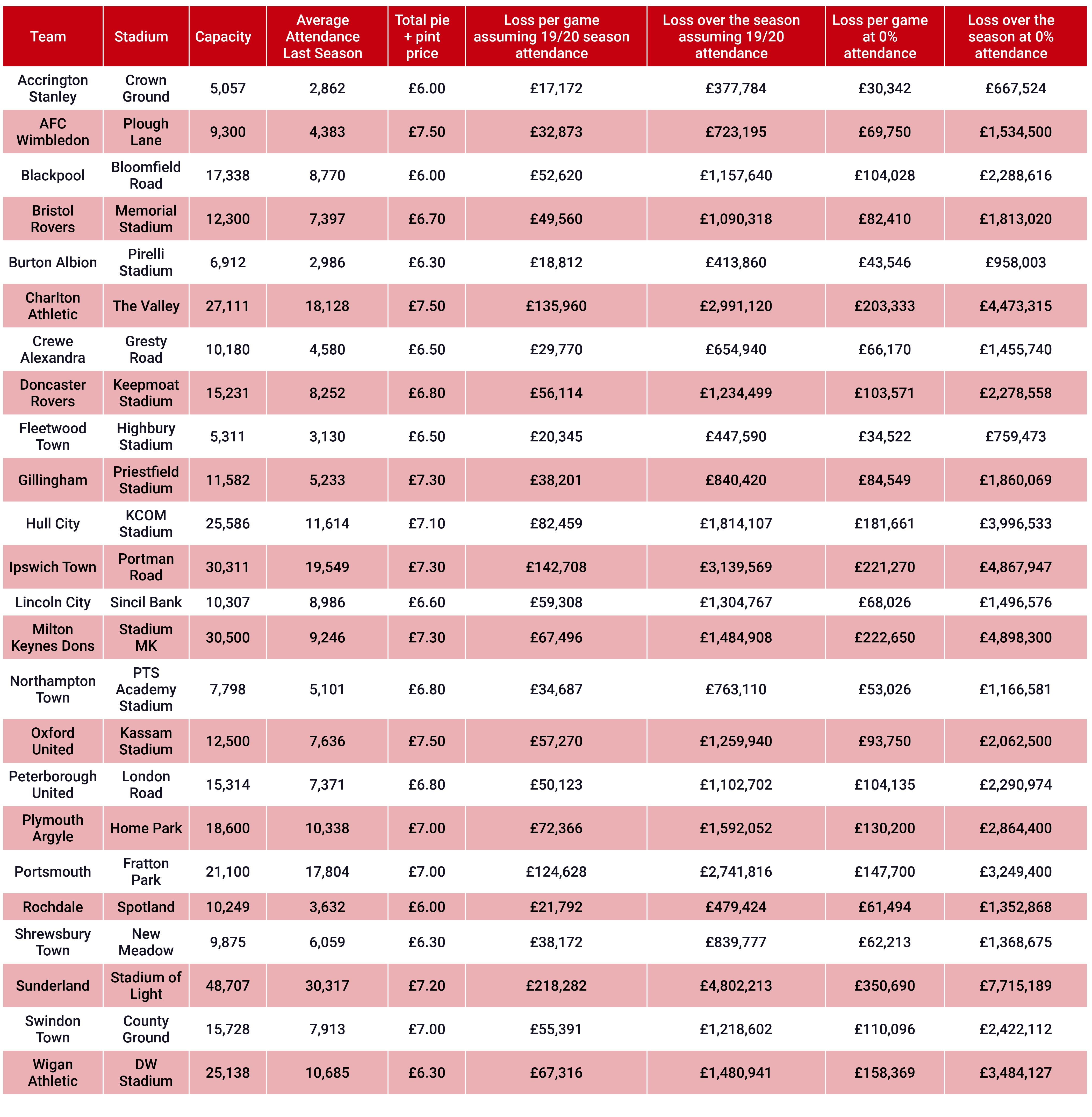 Ipswich Town and Charlton Athletic are also all expected to lose around £3m if fans can't return this season.

At the other end of the spectrum are Accrington Stanley, who thanks to their stadium's smaller capacity, are set to lose around £17,172 per game and £377,784 over the season.

Collectively, it is estimated that League One clubs could lose over £1.5m per game without fans and £34m if fans are unable to return all season. 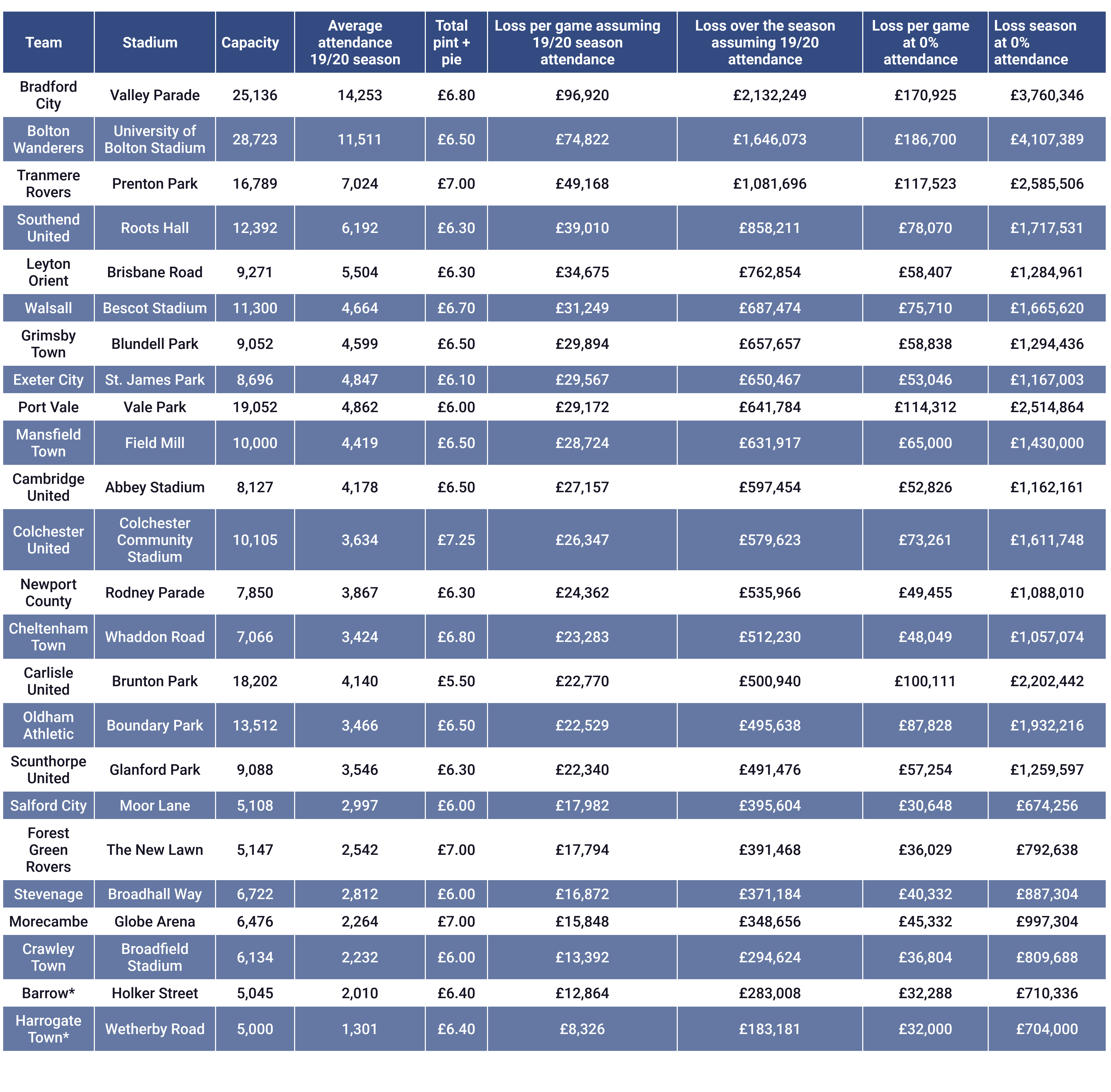 Newly relegated Bolton Wanderers are set to be hardest hit in League Two, with expected losses of £74,822 per game and £1,646,073 if this rule lasts all season.

Bradford City are also all expected to lose over £2m if fans can't return this season.

At the other end of the spectrum are Salford City, who thanks to their smaller capacities, are set to lose around £17,982 per game and £395,604 over the season.

Collectively, it is estimated that League Two clubs could lose over £715,000 per game without fans and £15.7m if fans are unable to return all season. With one of the biggest stadiums in the league, the newly-christened Washington Football Team has the most to lose without fans in the stands. They are set to shed over $1,082,400 dollars per game and subsequently over $8,659,200 across the entire season.

The New York Jets and Giants, who share the New Jersey-based MetLife Stadium, come in at joint 2nd with $8,448,000 estimated losses. The nearby Buffalo Bills, who boast the most expensive beer in the league at $10.50, round out the podium with $8,020,096 estimated season losses, coming in at just over $1,000,000 dollars per game.

At the opposite end of the table, the Atlanta Falcons, Baltimore Ravens, and Arizona Cardinals stand to lose the least at the concession stand, thanks in part due to their $1.50, $3.00, and $4.00 hot dogs respectively.

With social distancing restrictions in place, most hospitality and leisure venues are insisting on going cashless. Remember where possible to use your credit card or debit card and make use of contactless payment, to help adhere to social distancing measures.

For information on how to keep your wallet and cards clean, visit our useful guide: https://www.money.co.uk/guides/can-you-get-coronavirus-from-your-wallet.htm

* The price of a pint and pie were unavailable at the time of this study so we used the average prices of the other clubs in League Two.

We sourced the maximum attendance and the cost of concessions at each Premier League and NFL stadium. Making the assumption that every person could purchase one of each item (Hot Dog and Beer for NFL, Pie, Tea, and Beer for Premier League), we worked out the potential takings per game and per season for each team.

Then, using the estimates of reduction from the Premier League and the New England Patriots, we subsequently worked out the reduction with 50%, 40%, and 20% attendance. This allowed us to estimate the potential takings per game and season with the new coronavirus attendance numbers.