The personal finance experts at money.co.uk have analysed Barbie's professions to find out the average salary across the UK and USA and the gender pay gap to reveal how different Barbie's earnings would be compared to her male counterpart Ken.
Share this guide 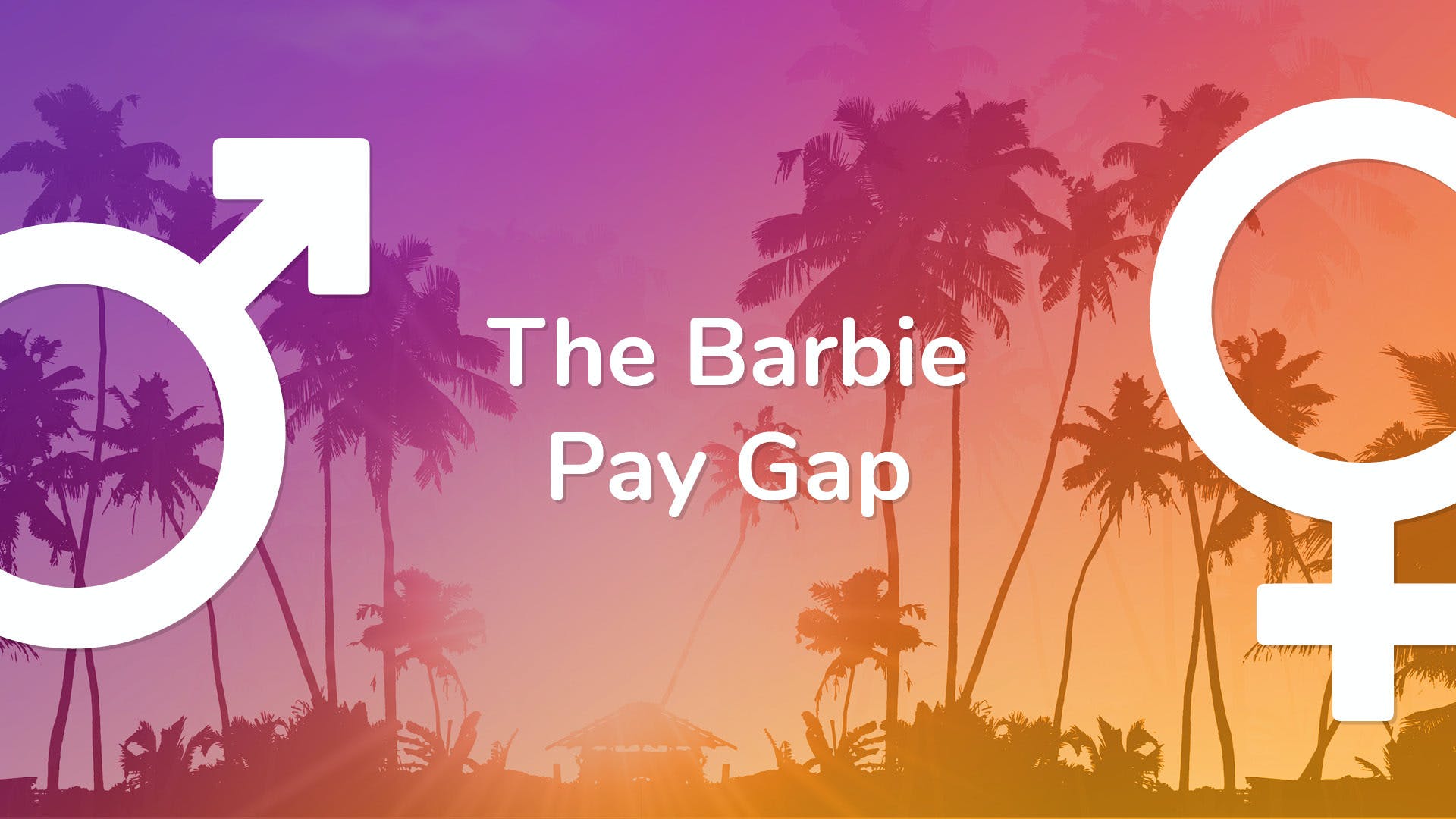 Barbara Millicent Roberts or Barbie as she’s better known, has been an icon for many young girls and boys for decades.

She’s been hard at work at a whole host of jobs for over the last six decades, and she’s not slowing down any time soon either.

If like Barbie you’re earning a salary, you’ll likely need a current account to have it paid into. Compare current accounts to find the right deal for you.

With the doll performing over 70+ professional job roles throughout her life; from a fashion model to doctor; tennis player to beekeeper, there are very few occupations Barbie has not worked.

However, life in plastic is not looking all that fantastic.

The personal finance experts at money.co.uk have analysed Barbie's professions to find out the average salary across the UK and USA and the gender pay gap within each role. The analysis highlights that despite equality laws there is still a large disparity between females and males in the professional world.

It turns out the only equality between Barbie and her male counterpart Ken, is their price tag.

Barbie may be living in her dream house, but we could argue not her dream role.

Across the 60 roles analysed with pay gap data available, only 35% of the occupations that Barbie has worked, see females earning more than males.

Shockingly, in the USA the gender bias across Barbie's occupations is far greater, with 100% of the roles analysed showing males earning more than females. She may be the Barbie girl but it’s still very much a man's world.

You cannot argue that over the years Barbie has made gigantic leaps for gender bias and equality throughout her lifetime. With the brand providing Barbie with careers where women are woefully sparse, Barbie has been a stable game-changer, showcasing to young children all over the globe that you can live your dream and be who you want to be.

However, despite efforts and campaigns by women’s rights groups to close the gender pay gap, it still exists. Two known major contributors to the gender pay gap are fewer females working managerial or senior roles and women working part-time.

Ken would earn millions more if he worked the same roles

Barbie's astounding CV across the occupations with data available and the number of years worked in each role was analysed to calculate the earning disparity should Ken have the same resume.

Despite the median gender pay gap in each country, the data shows pay percentages across the roles analysed differ, with the UK lifetime salary difference at 12.11%, smaller than average and the USA revealing a 21.6% difference, nearly 30% higher than average.

Which Barbie occupations have the greatest gender pay gap? 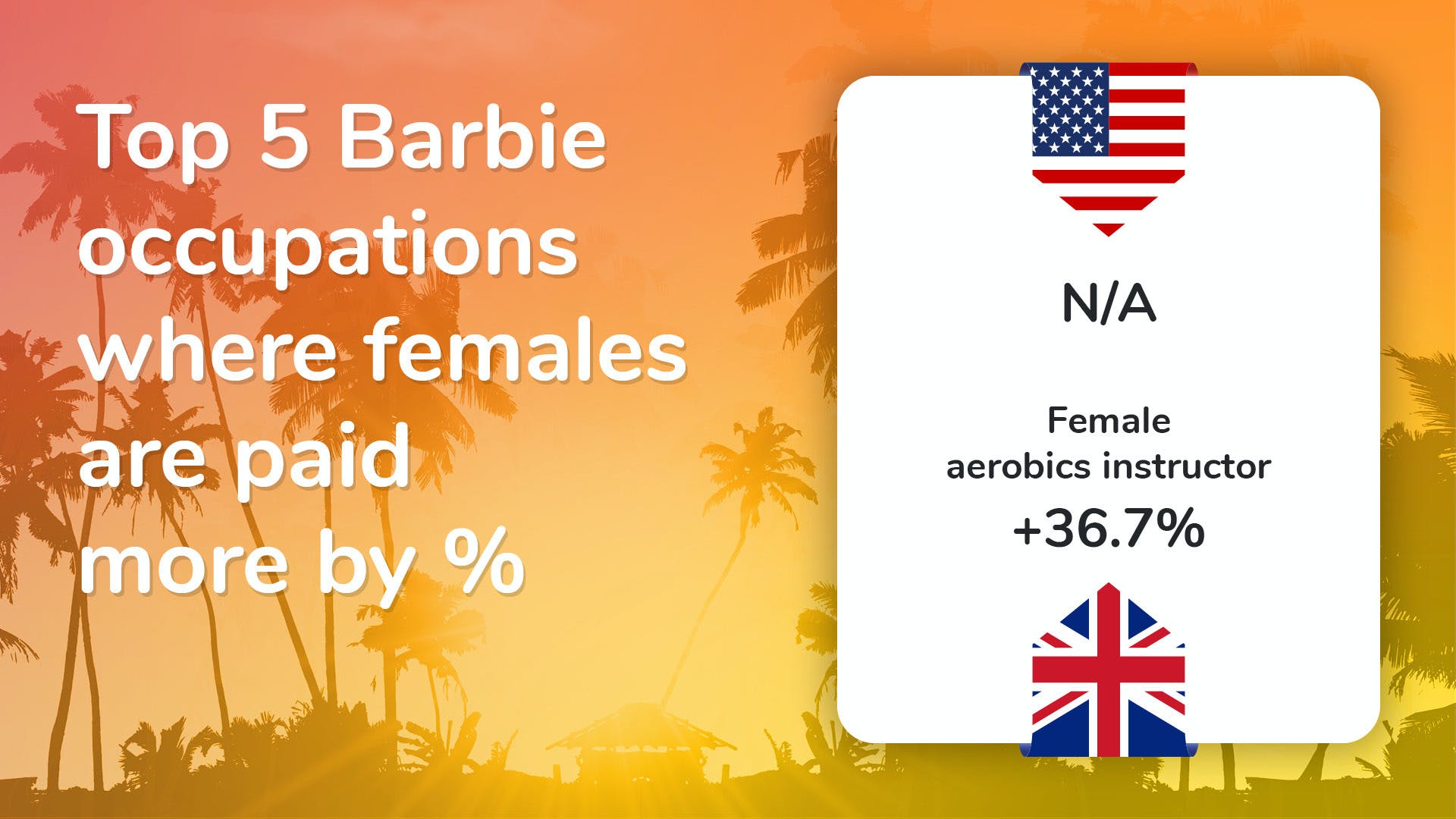 In the USA, none of Barbie's occupations analysed reveals females are paid more than males. 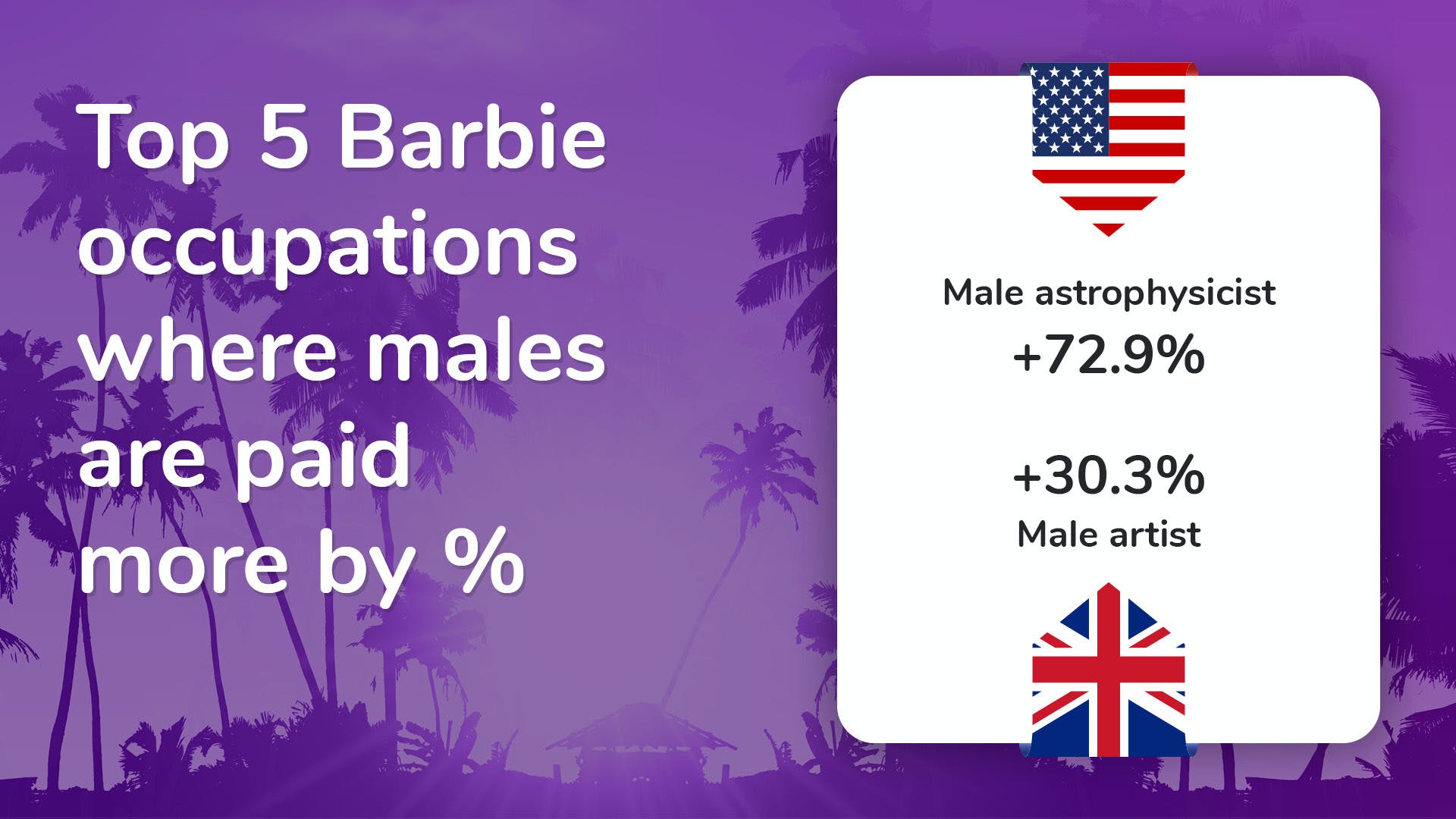 Male scientists in the USA earn 72.9% more than females, whereas Male judges and film directors earn over 35% and 30% more than their female counterparts.

In the UK, males working in creative and performing arts roles such as Artists and Ballerinas have the highest percentage of earnings greater than females with a pay gap of -30%. Yet, this is still less than half of the USA’s highest pay gap across occupations at -72.9%.

Which Barbie occupations are the highest paying for females? 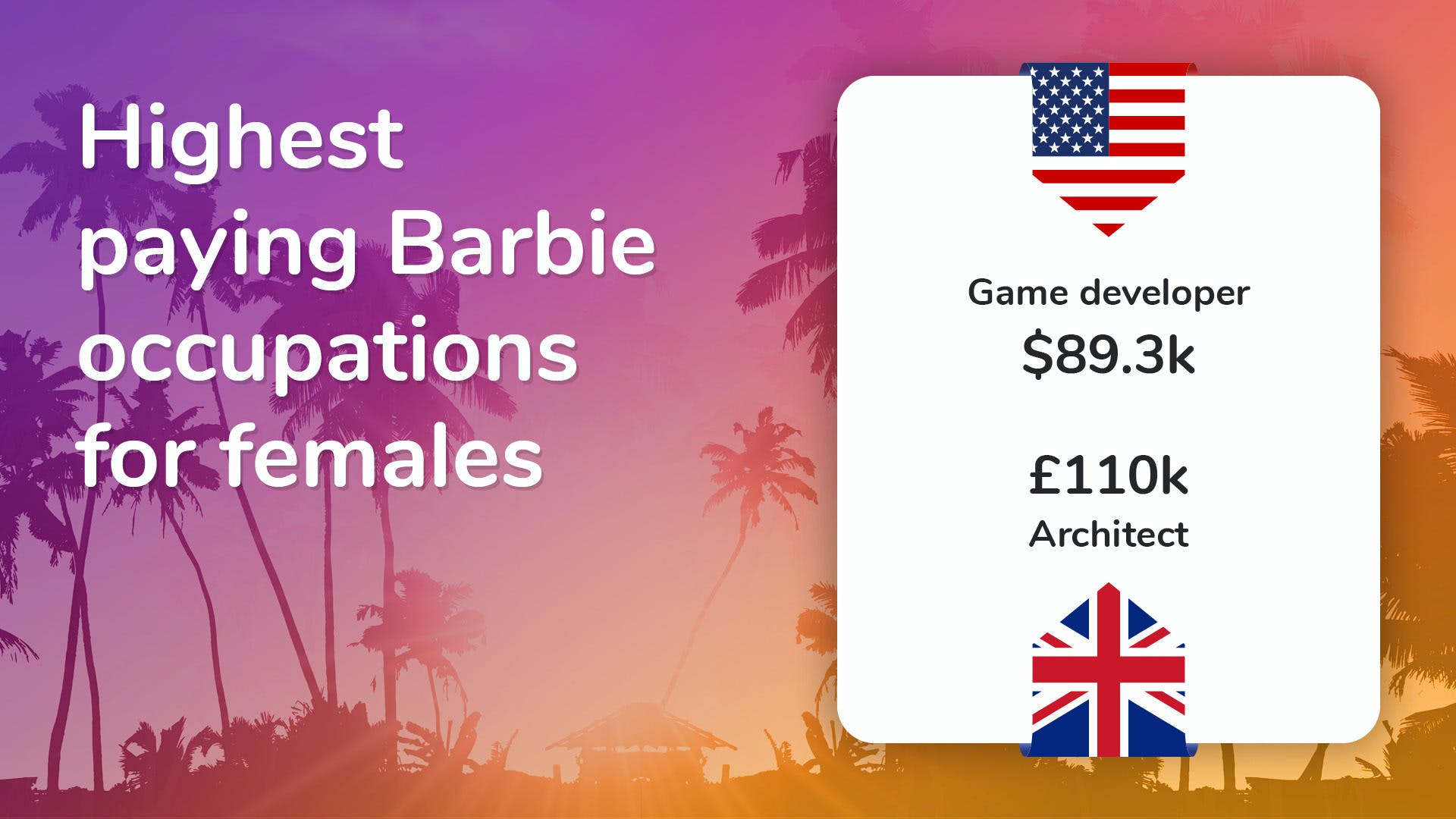 Barbie the Architect ranks in the top five across both countries with female architects in the UK earning on average £109k, 15.34% greater than males. In the USA, engineering roles are also high earners offering over £69k for females in each position.

Which Barbie occupations are the lowest paying for females? 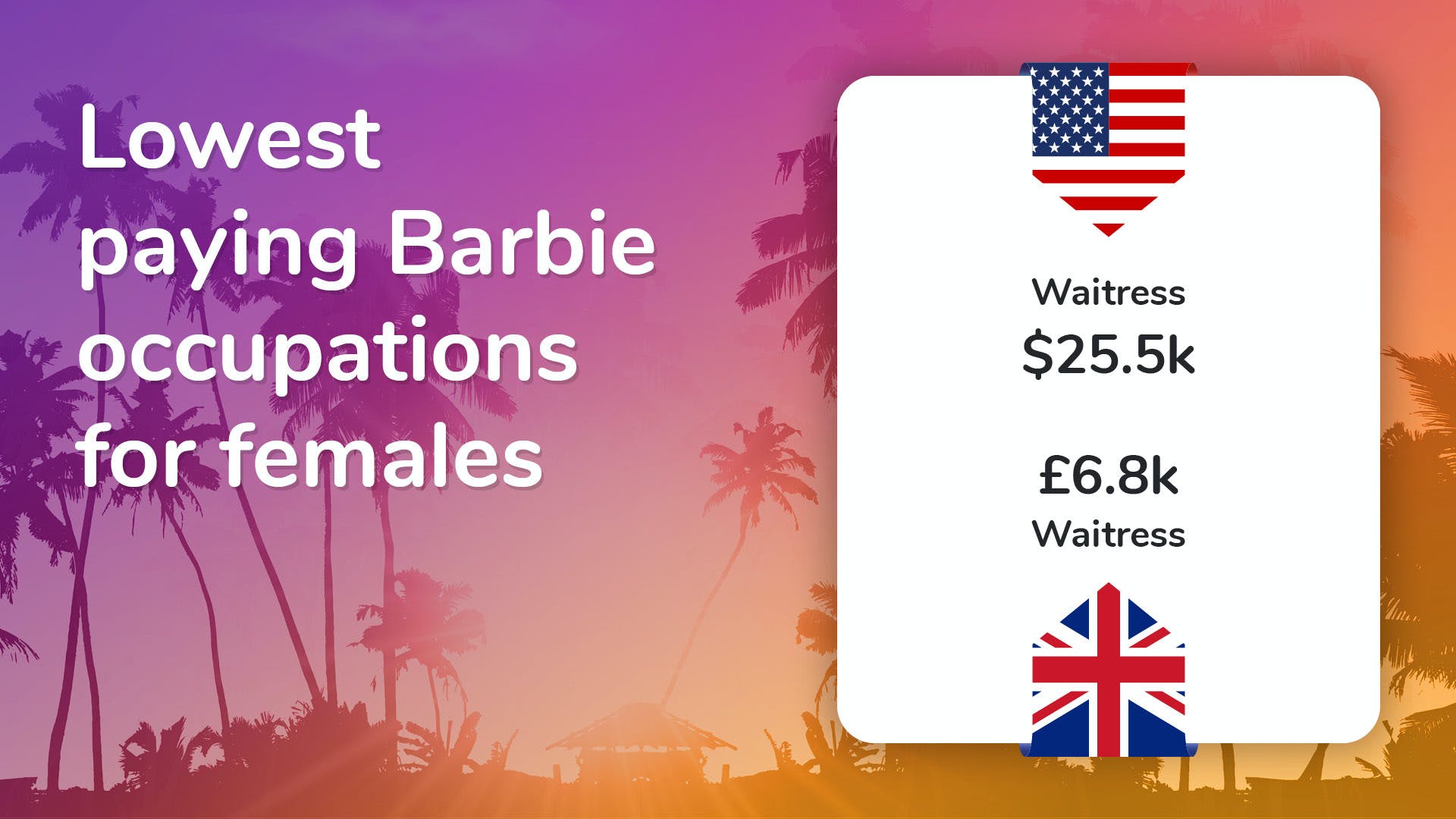 Across both countries, waitress roles come out as the lowest paying, with coffee shop workers and cashiers second and third positions. In the UK, a Student teacher salary ranks 5th for the lowest paying female role, whereas the role ranks 11th for lowest paying in the USA.

The fashionista has never been a stranger to the cameras and has an astounding career in film, starring in nearly 40 movies, with movie sales racking up over a billion dollars.

Now no one would argue Barbie is an A-lister, so the personal finance experts analysed the average earnings for today’s A-lister stars, to reveal Movie star Barbie’s net worth. The analysis shows of the 36 leading lady movies Barbie appeared in she could have earned £15 million per film on average and a total of £570 million overall.

What is the gender pay gap?

The gender pay gap is the percentage difference between average hourly earnings for men and women. It is an issue that affects women globally. In the UK, in 2020, the median gender pay gap was 15.5%. In the USA that gap is slightly higher at 16%.

How is the gender pay gap calculated?

It’s calculated by adding up the wages of all male and female employees and dividing it by the number of employees. The pay gap is the difference between the mean figures for men and women, which is reported as a percentage.

Why does the gender pay gap exist?

There are a variety of reasons the gender pay gap is still something we must contend with. These can range from discrimination in the workplace and patriarchal notions of gender roles, to the stereotyping of the kinds of jobs men and wome take as well as the lack women in senior positions. Read more about how the gender pay gap impacts women.

Money.co.uk analysed Barbies career and each occupation against 2020 pay gap data from UK ONS and US Bureau of Labour Statistics and categorised each role against the occupation type available.

To calculate the lifetime salary totals, the total number of years worked in each occupation was calculated from the year the doll was launched and times against the average salary for that occupation. Where launch years were not available the average job tenure for males and females in each country for 2020 was used for workers aged 25+. UK job tenure data sourced from UK Data Service, US job tenure data sourced from US Bureau of Labor Statistics.  A lister average salary was pulled from Business Insider.