The ultimutt guide to the world’s most popular dog tattoos

The relationship between people and dogs has long been a special one, earning our pooches the honourable, and long cherished title of ‘man’s best friend’. As a result, our pups are portrayed on everything from cushions to cakes, with artistic representations showcased in sculpture, paintings and even ourselves. Yes, our barking buddies are regularly our inking inspirations when getting tattooed, whether it’s our own best friend or simply our favourite breeds.
Share this guide 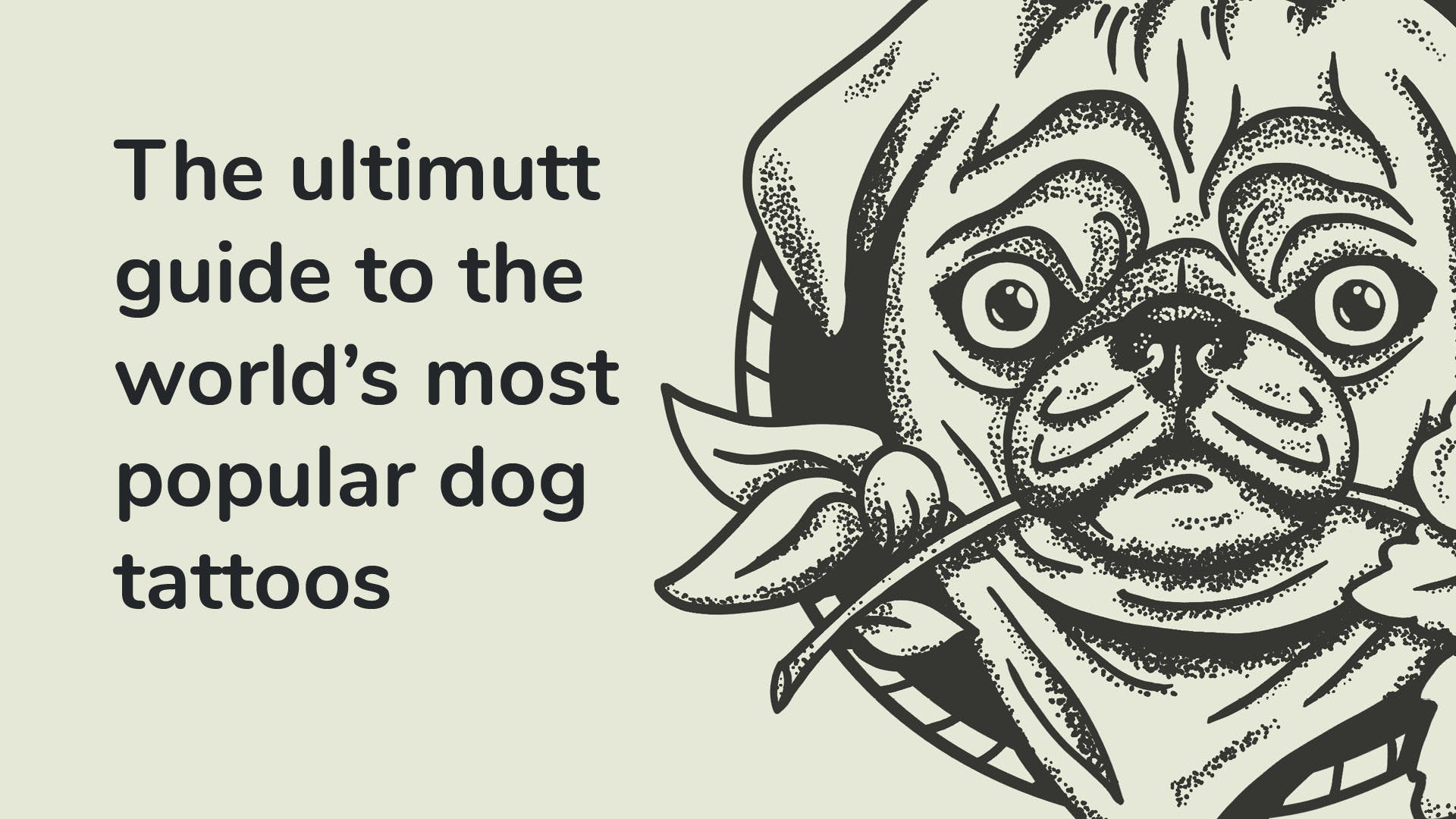 But which breed is the most likely to be a muse for our tattoos? Keen to find out, we ran the names of one hundred of the world’s most popular dog breeds, combined with the word ‘tattoo’ through Google, Instagram and Pinterest. This helped to provide us with an overall picture of both the amount of people searching for these specific tattoos, as well as the number of these specific tattoos that have been documented via Instagram and Pinterest.

Not only did we discover the most pup-ular dog breeds for tattoos, but we also uncovered the other most beloved pets we get inked on our bodies. Read on to learn more.

While a tattoo is nice, choosing the best pet insurance is a better way to protect your furry (or furless) friend.

The most tattooed dog breed

With nearly 25,000 Instagram posts alone, it’s the pug that is the most tattooed breed in the world. The small, wrinkle-nosed pooch has over 103% more tattoo-related posts than the French bulldog, which came in second place. Most famous for their face folds and cute curly tail, pugs have a playful and loving temperament and aren’t a new fashion icon – they were actually Queen Victoria’s favourite dog - she owned 38 during her reign.

If you are looking for tattoo inspiration, our design team have created their very own Pug tattoo template you can download and take with you to your local tattoo artist.

The French bulldog, which takes second place, also shares the pug’s recognizable characteristics of a flat, wrinkled face. Although the pug isn’t the smallest breed in the top 10 – beaten by the Mexican-born Chihuahua which comes in fourth place – it is much smaller in build than the likes of the Doberman pinscher which is third on the list and a Rottweiler which ranks eighth. In fact, it’s smaller dogs that really prove most popular in our tattoo list, with pugs, Frenchies, Chihuahuas and dachshunds all making the top five. Not to say bigger dogs aren’t tattoo-trendy too – greyhounds, rotties and Labradors all proved popular.

The cost of dog tattoos

While our most popular tattooed pooch, the pug, is much cheaper at around £200 to get this flat-faced friend permanently etched onto skin. Meanwhile, our curly-haired pals, the poodles, are the cheapest of our top breeds to get tattooed, with an estimated cost of around £140. 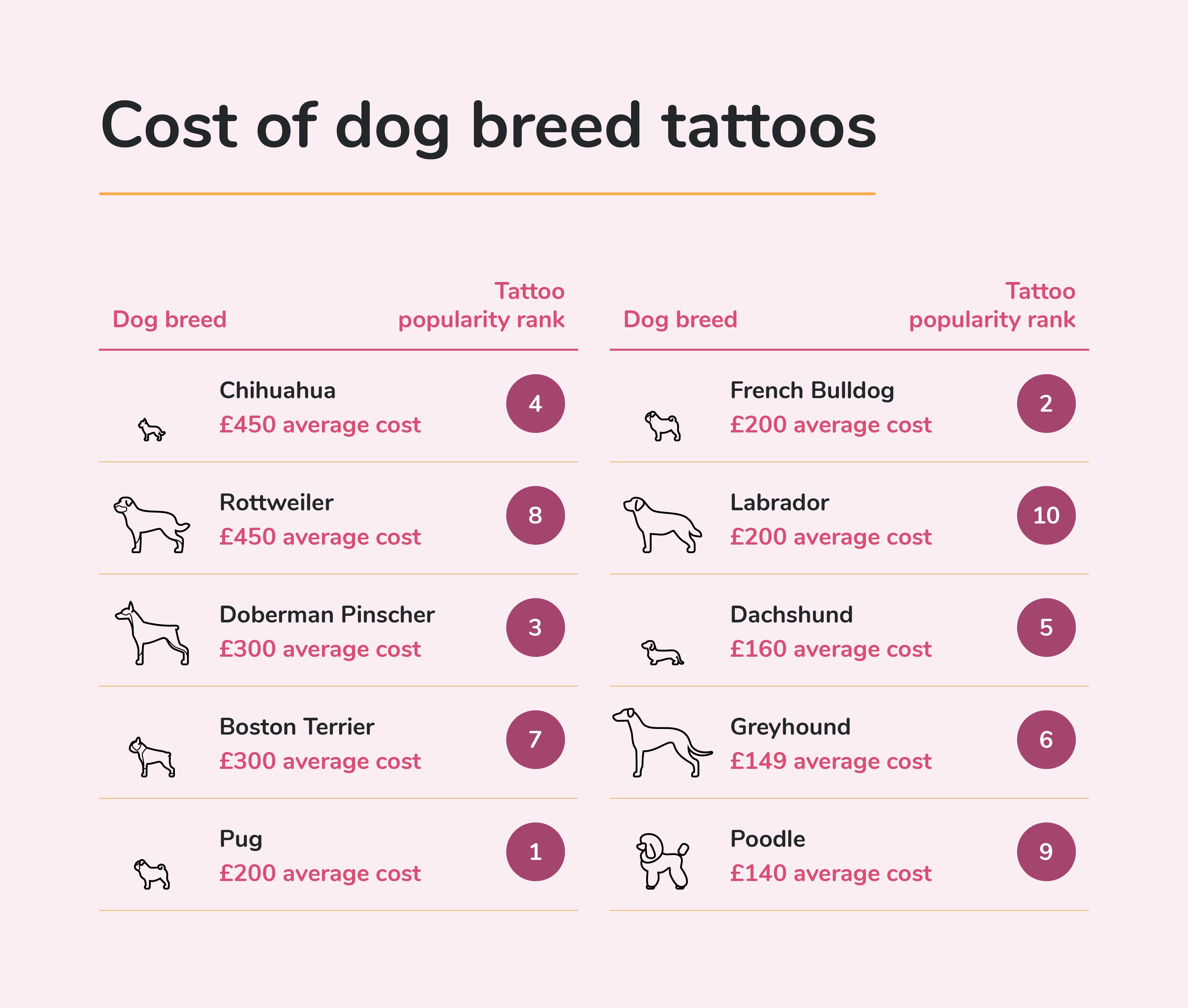 Top of the tattooed pets

While the age-old debate of whether cats or dogs make better pets continues to rage on, we know that there’s more than one species of animal we like to call our friends. Whether it’s rodents, reptiles or rabbits, it’s not just dogs that are starring on our skin, so we had a little dig into all of our favourite pets.

And it turns out that dogs only come in fourth place on our most tattooed pets list! Man’s best friend is firmly beaten by the smooth curves of the slithering snake, which has always been a classic figure in tattoo, thanks to historically enjoying a huge range of symbolic meanings. From the serpent which tempted Adam and Eve to the ouroboros (the ancient symbol of a snake biting its own tail, representing the eternal circle) it’s these countless interpretations and portrayals of this fascinating creature that show why it’s heads and tails ahead of the other pets on our list.

In second place (and perhaps proving that maybe we do love them more than dogs?) is our clever, cuddly and curious companion the cat, with birds coming in third place. 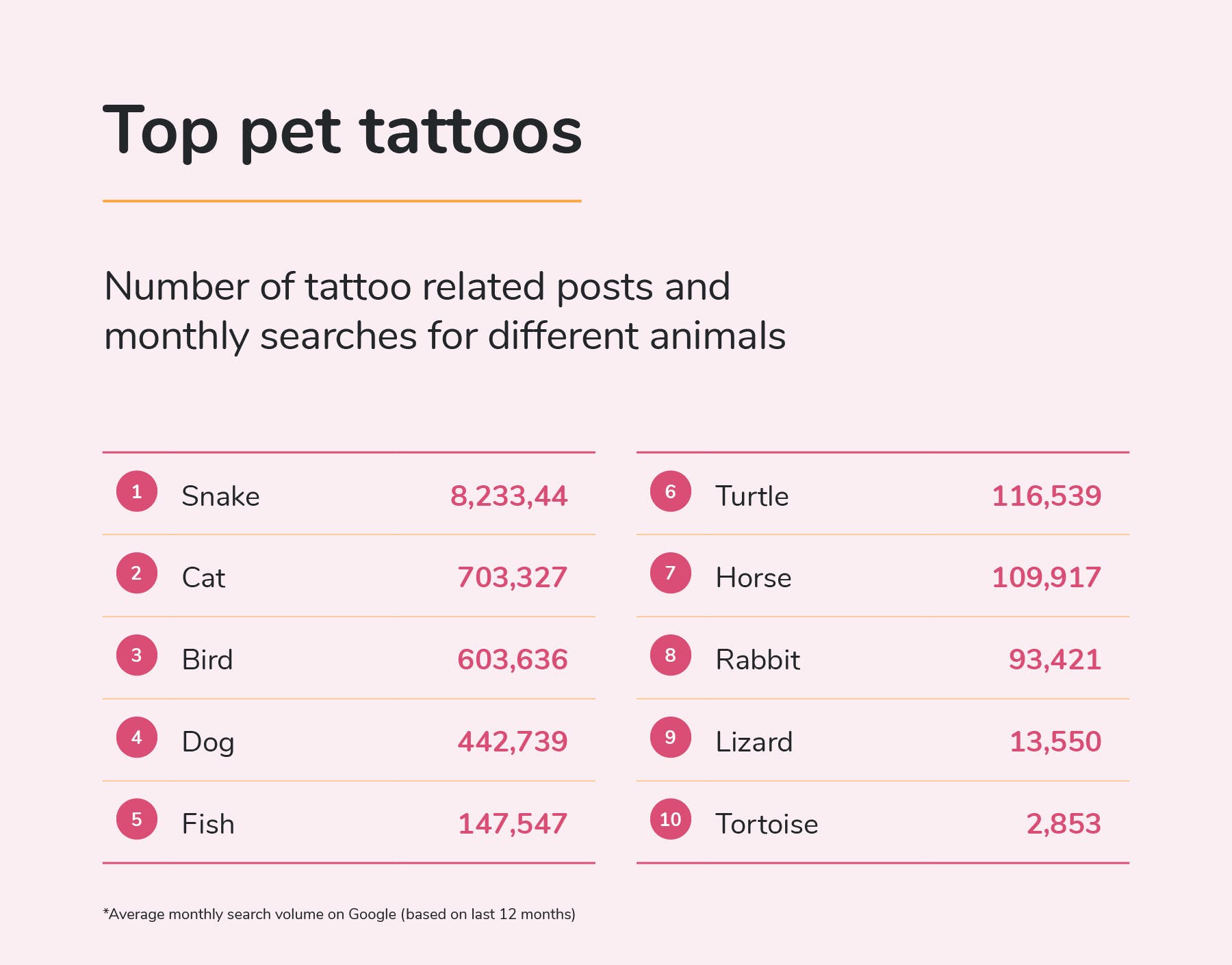 The most tattooed cat breed

So, now we know that cats officially beat dogs (when it comes to tattoo popularity) we thought we’d delve deeper to discover which specific breeds of cat people are getting inked the most.

The number of Sphynx cat tattoos is an incredible 820% larger than the next most popular breed of a Siamese cat. Famous for its furless skin, the Sphynx cat originates from Ontario, Canada where they were developed through selective breeding in the 1960s. The furless appearance is the complete opposite of the Maine Coon which is famously dubbed as ‘the gentle giant’ by Maine natives (of which it is the official state cat) due to its robust bone structure and abundance of fur. 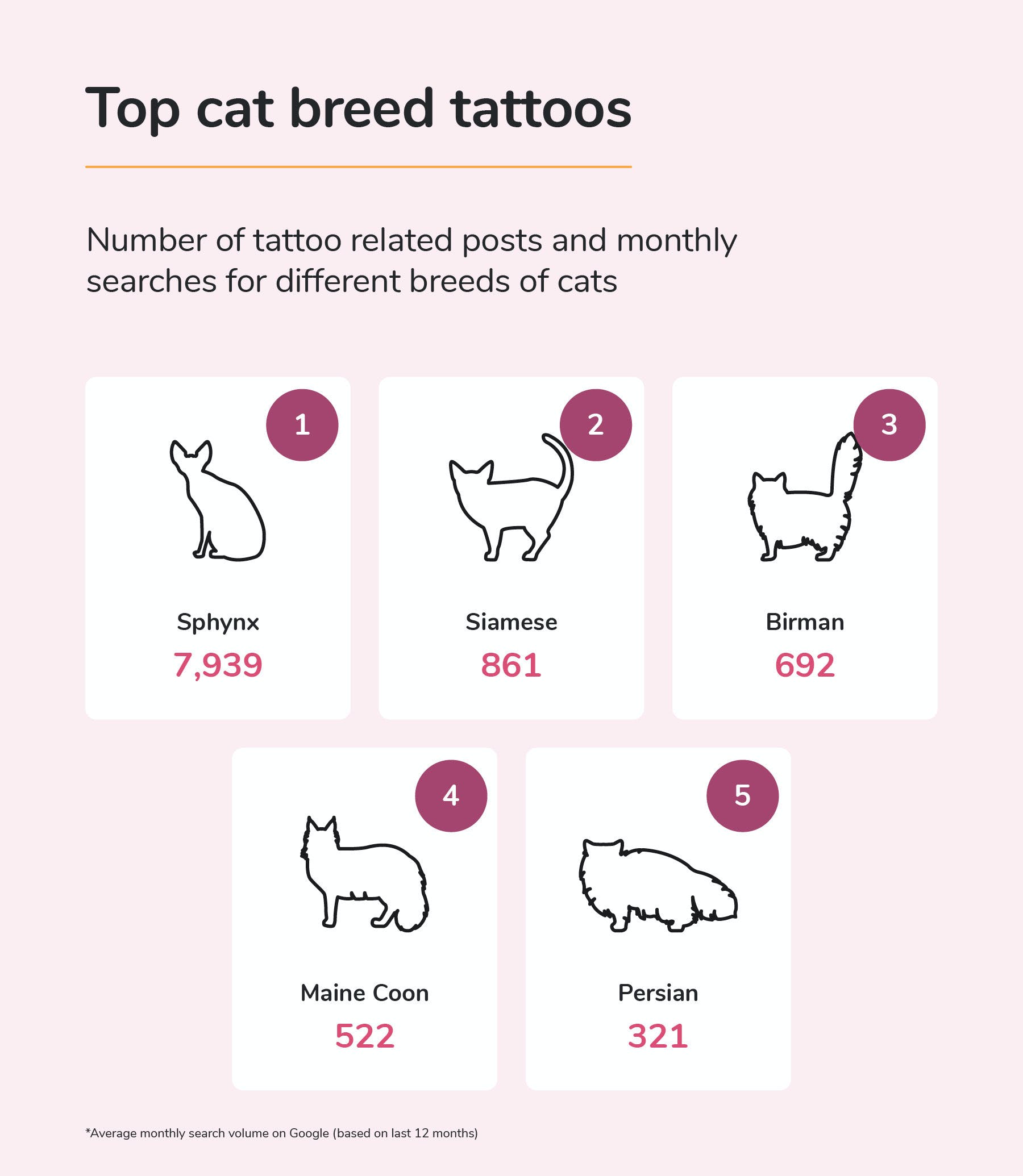 So, if you love your pet enough to have them permanently etched onto your skin, then it’s also worth making sure they’re protected with the proper insurance. We can help you compare costs for dog insurance to make sure you get the best deal. Looking to fund your next tattoo adventure? You could consider a credit card. However, it's always worth remembering that a credit card requires regular repayments. You can accrue hefty interest and fees if you do not pay back the full amount each month.

Ranking of most popular tattoos was done by combining the names of one hundred of the most popular dog breeds, top 30 types of pets and top 10 cat breeds with the word ‘tattoo’ and ran the terms through Google, Instagram and Pinterest. This provides an overall picture of both the amount of people searching for these specific tattoos, as well as the number of these specific tattoos that have been documented via Instagram and Pinterest.

Tattoo costs and time to create were provided by tattoo artist Sean Hill. He based his estimations on the most liked design of each breed on Instagram.