The UK's Joe Exotic - where in the UK are dangerous animals being kept as pets?

Just over a year ago, just as we were all getting used to the idea of spending a lot more time indoors and in front of the TV, the world was introduced to Joe Exotic.
Share this guide 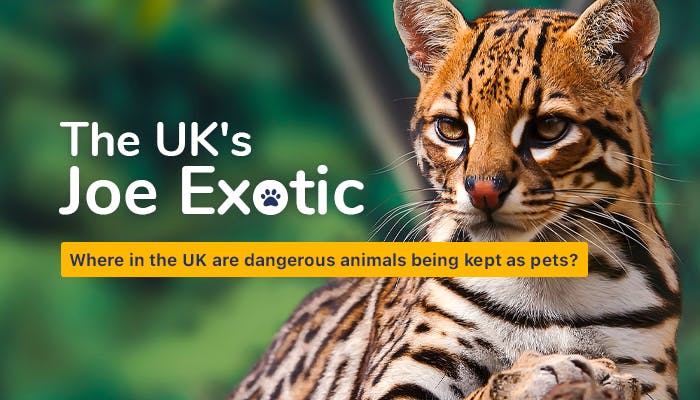 The timing couldn’t have been more perfect for Netflix’s latest true crime documentary series, Tiger King, following private zookeeper and convicted felon Joe Exotic, who kept over 50 species of endangered and exotic animals at the Greater Wynnewood Exotic Animal Park, including over 200 big cats such as tigers, lions, pumas, and more.

But is the UK home to its very own Joe Exotic wannabes? For these kinds of dangerous and exotic pets, it’s not just the usual costs such as vet bills and pet insurance that you need to worry about, you actually need to hold a special licence too.

We’ve submitted Freedom of Information requests to councils around the UK to find out how many licenses are held to keep wild, dangerous, or exotic animals and which species are being kept.

While many of the councils around the UK reported that they received no applications to keep these kinds of animals, here are the ones which received the most applications in the last five years. 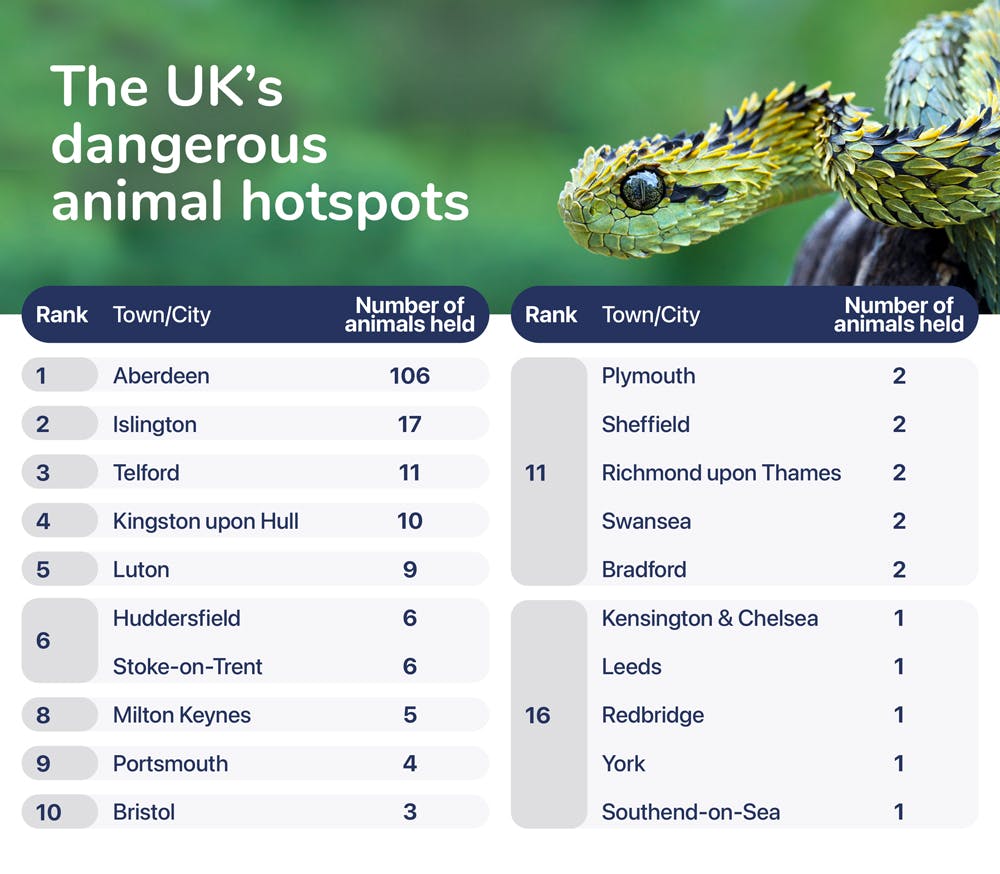 You may never have suspected it, but Aberdeen is home to over 100 dangerous and exotic animals, far more than any other area which responded to our request, largely due to one collection of 100 Buthidae scorpions.

This was followed by the Shropshire town of Telford, with 11 applications which included two ocelots, as well as various species of spiders and scorpions, and Kingston upon Hull, with seven applications, which were to hold various types of snake, as well as a Cuvier's dwarf caiman. 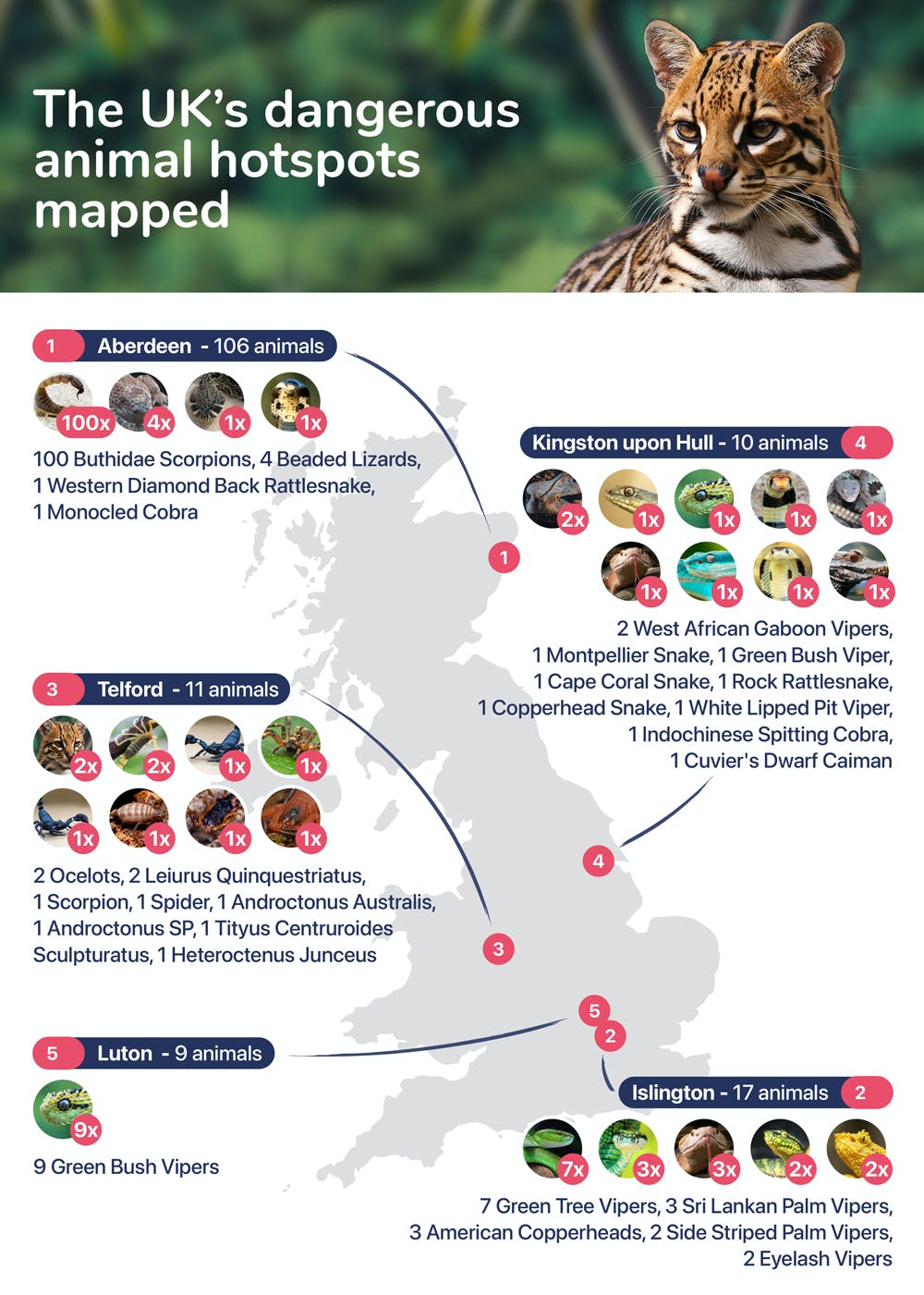 One of the most dangerous animals on the list is the monocled cobra, also known as the Indian spitting cobra, named for their ability to spit their poisonous venom, which can be deadly, with these cobras currently held in Bristol, Aberdeen, and Portsmouth.

The most commonly held species

Of the councils which responded to us, the most commonly held animals were scorpions, with 107 applications across the country.

It also appears that Brits have a thing for snakes, with 40 licenses for various species of the cold-blooded reptiles. 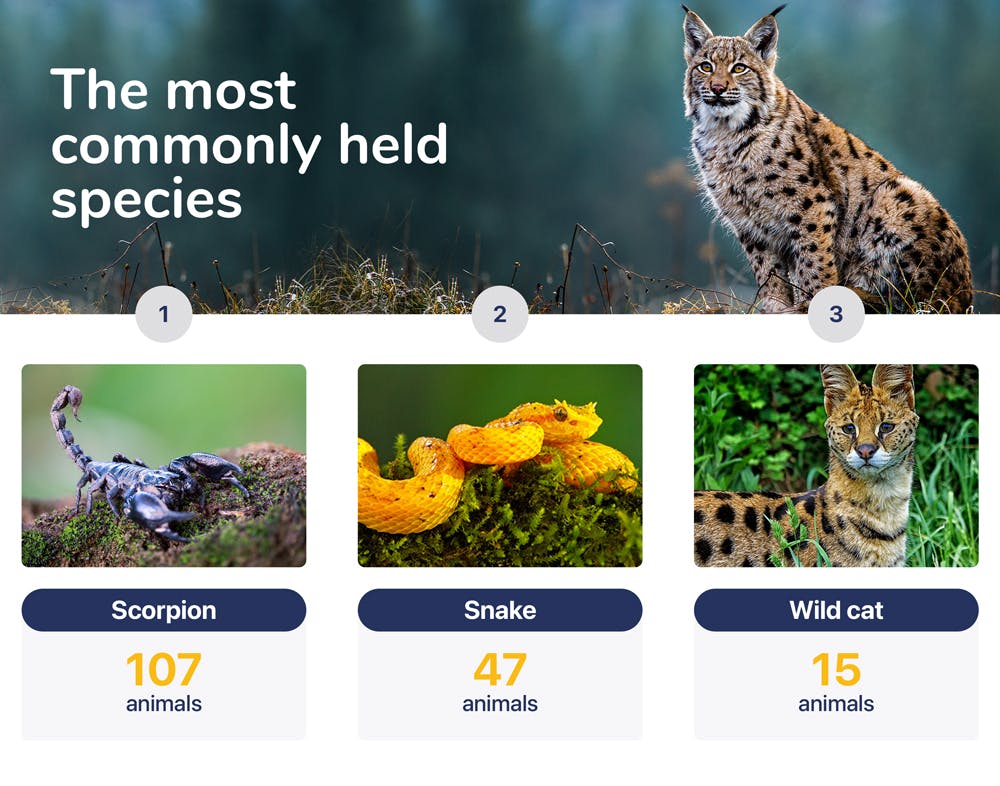 The most common of these was the green bush viper, with 10 owned by residents within the councils that we got information from.

The green bush viper is native to west and central Africa and as is the case with all vipers, has a venomous bite, which is why you need a licence to keep one in the UK.

Other than snakes, there were nine wild cats held, including two servals (an endangered wild cat native to Africa), four Savannah cats (which are a cross between domestic cats and servals) as well as two ocelots and a Eurasian lynx.

Other species kept on these shores include dangerous spiders, scorpions and Cuvier's dwarf caimans, which are small alligators.

We submitted Freedom of Information requests to the councils of the most populated towns and cities in the UK, requesting the number of licenses issued to keep wild, dangerous or exotic animals under the Council under the 1976 Dangerous Wild Animals Act in the past five years (2016-2020), as well as how many licenses are currently issued and the species that are currently held.

In total, we received 60 responses from councils as of 7 May, 2021, many of which responded saying that they had not issued any licences in this time. Those above are the councils that responded with information by this date.

Note that one licence issued may cover more than one animal.