The most popular dog breeds over time

A lovable Pug or a devoted Labrador, which breed is the most popular? Check out our interactive study to see which dog comes out on top.
Share this guide 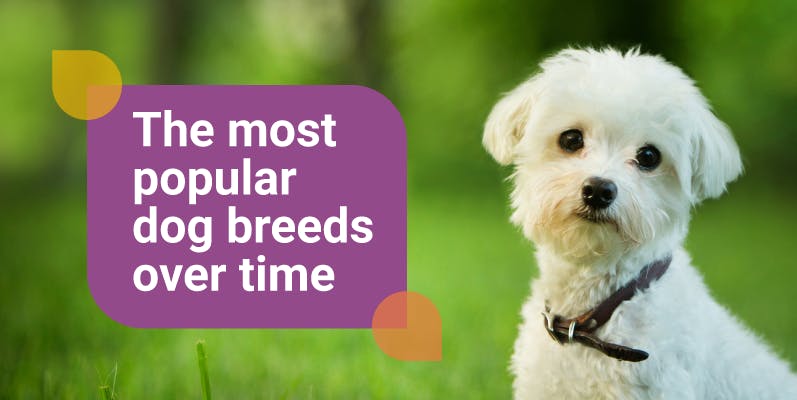 An energetic German Shepherd, a loyal Collie or a sweet Bulldog, everyone has their favourite kind of dog. Every year, the most popular dog breeds change and some of the most recognisable breeds have declined in popularity while surprising new dogs have emerged.

Our pet insurance experts investigated dog breed registration data, dating back to 1997, in order to determine how the popularity of different dog breeds has changed during the past two decades.

Protect your pooch and compare pet insurance to scope out our best deals.

Changes in popularity for dog breeds between 1997 and 2020

In the last two decades, the total number of dog breed registrations has had an overall decrease of 7.2%. Although there were 19,328 fewer registrations in 2020 than in 1997, there have been some breeds that have shot up the popularity tables and others that have had sizeable falls.

The French Bulldog is the dog whose popularity has increased most between 1997 and 2020. With more and more people wanting to own this compact and playful dog, 39,266 of them were registered in 2020 compared to only 185 in 1997.

The second-largest increase was recorded for the Hungarian Wirehaired Vizsla. Although this is thought of as a rare breed, with far fewer total registrations than other types of dogs, the popularity still grew by 1,807%. It went from just 41 registrations in 1997 to 782 in 2020.

It is believed that Pugs can be traced back to 400 BC, making them a part of one of the oldest breeds. Their affectionate yet mischievous nature means they still have quite a few fans, even thousands of years later. Pug registrations grew by 1,007% between 1997 and 2020, from 545 to 6,033.

Some more small dog breeds increasing in popularity are Boston Terriers and Miniature Smooth Haired Dachshunds. The Terriers had an 889% increase from 1997 to 2020 while registrations of the recognisable Dachshunds grew by 882%.

As well as the Wirehaired Vizsla, the Dogue de Bordeaux is another breed with a popularity increase. These dogs have had a 669% total growth in registrations. Registrations soared from 195 in 1998 to 2,895 in 2011 before levelling off to a healthy average of 1,500 in 2020.

The West Highland White Terrier, affectionately known as a Westie, has the greatest decrease in popularity, at -91%. In 1997 there was a substantial number of these dogs registered (16,148) but that has since fallen to only 1,480.

As man's best friend, the German Shepherd has been known for centuries as the ultimate breed of loyalty. However, the popularity of this breed has decreased by 71% throughout the last two decades. Going from 24,508 in 1997 to 7,067 in 2020, which is an overall decrease of 17,441 registrations.

You may think a working dog like the Bullmastiff would be one of the most popular out there but, during the last two decades, it has lost 84% of its original popularity. There was a high of registrations with 2,357 in both 1997 and 1998 but this dropped to just 372 in 2020 (there

Whichever breed you pick, choose the best dog insurance for it.

Known for their intelligence and loyalty, Labrador Retrievers are firmly set in the top spot. Although the number of registrations dip over the years, namely in 2001 with 33,668 and 2015 with 32,507 registrations, this breed has consistently been the most popular choice.

The breed that has increased the most in overall popularity is the French Bulldog. 185 French Bulldogs were registered in 1997, compared to 39,266 in 2020. That's a massive 21,125% increase. This could be down to the fact they only need an average of one hour of walking every day, making them fit in perfectly with a WFH lifestyle.

Cocker Spaniels have enjoyed a steady rise over the years. They started off strongly in 1997 with 14,541 registrations before declining slightly to an average of just over 13,000 in 2001 and 2002. The breed made a solid comeback over the years though and was the third most popular breed in 2020 with 25,585 registrations.

During recent decades, large dogs have been the most popular choice with over 1,500 registrations per year and a high of 2,252 in 1997. However, big dogs were dethroned by small breeds in 2012 as there were 25 more handbag-sized pooches registered than larger varieties.

Medium dogs have always been the least popular in terms of registrations with numbers not quite reaching up into the thousands. Their best year was in 2008 with 798 recorded for these middle-sized pets.

Our study indicates that convenience is key when it comes to grooming our dogs. As a whole, registrations for short-haired dogs have risen 147%, while those for long-haired and medium-haired dogs have decreased.

Long-haired dogs like Bearded and Rough Collies have consistently been the least popular with only 355 registered in 2020.

Dogs are a great excuse to get out and about, which may explain why dogs that need more than two hours of exercise are most popular. Registrations for energetic dogs like German Shepherds and Spaniels were on top until 2016 but have since been overtaken by dogs that require up to one hour of exercise per day.

The more laid-back dogs that are only looking for 30 minutes of activity have been the least popular from 1997 to 2020 - the lowest number of registrations of these chill pups was just 235 in 2018.

Most years, we favoured dogs that could live in flats or apartments to fit in with our lifestyle. In recent years, dogs that are happy in a small house are also more popular than those that would prefer a larger abode, as there were 204 registrations in 2020.

While dogs requiring large gardens were most popular in 1997 with 1,794 registrations, we now prefer dogs that only need a small or medium garden, which are 121% more popular than they used to be.

This was calculated by finding the average number of registrations of breeds that required a certain house size. For example, a small dog like a Bichon Frise can happily live in an apartment or a small house with a tiny garden but a big dog like a Mastiff needs more room.

Protecting your own pup with pet insurance

We understand that your dog is part of your family and if something were to happen to your pet, it would be a distressing experience.

Getting the best pet insurance in the UK for you and your dog will remove some of these stresses. Having the cover to pay for your pet's vet bills will allow you to make sure they receive the care they need.

Insurance for pets can provide some peace of mind as well as cover the cost of potentially expensive issues. You can choose from:

Learn more about which plan would be best for you with our guide to pet insurance.