Where the world wants to retire

For many, retirement is often a great opportunity to move abroad, with more time available to explore somewhere new and experience a different way of life, but where does the world want to retire?

Where the world wants to retire to

To reveal the world’s most popular countries retirees want to settle in, our pension experts used Google data to see where around the world is searched for the most – looking at search terms such as “retire in [country]”.

Before the findings get you reaching for your passport, it’s important to understand the different private pensions available so that you can make sure you have the best chance of saving for a comfortable retirement.

What are the most popular retirement destinations around the world?

France tops the list for being the most popular destination people want to retire to, with 20 countries searching about retiring here more than anywhere else. Other top countries include Canada, Argentina and Portugal, all of which vary in culture, climates and landscapes as people look to experience something new during retirement. 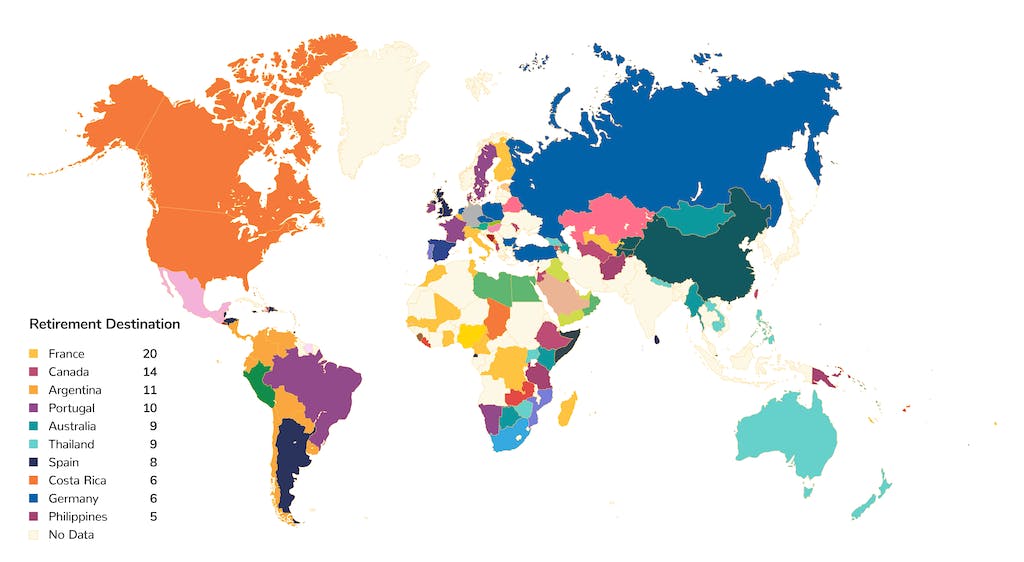 France is the most popular choice for those looking to retire abroad, with 20 other countries hoping to settle here after reaching retirement age. It has a big expat population, and with so many retirees having made a successful move it’s bound to have inspired those approaching retirement to consider the country as a place to settle in their later years.

With great food, a laid-back lifestyle as well as typically pleasant weather, it’s easy to see why it was the top choice for many. Its famous wine regions and delicious regional cuisines mean that there’s plenty of local produce to sample. In fact, the country is home to over 27,000 wineries and an impressive 3,177 Michelin-rated restaurants, so you’ll be spoilt for choice in retirement if wining and dining is your thing!

Outside of the food and drink, France is also really well connected, with a good transport system in place that makes it easy to explore more of Europe, perfect for retirees with the travel bug.

Although Brexit means the process of moving to Europe for Brits is now slightly different, it is still possible for UK citizens to retire to France. In order to stay long term, those from the UK will have to apply for either a long-stay visa or apply for French residency – both are doable as long as you meet certain requirements and don’t mind filling in some paperwork. 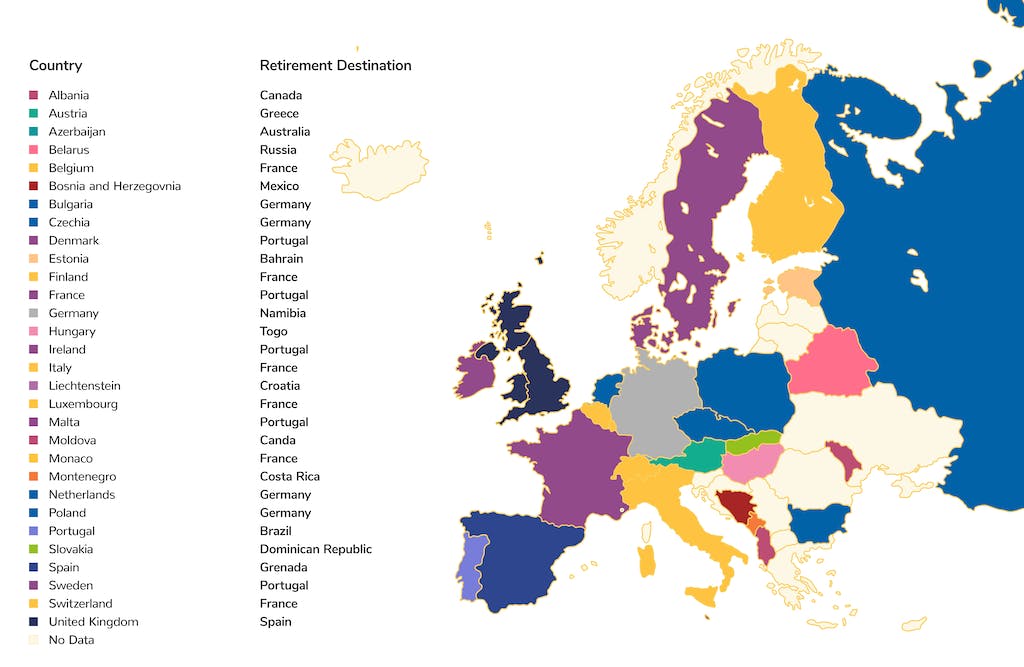 The most popular countries Europeans want to retire to

Looking closer at European searches, France was the most popular country people wanted to retire to, with six countries searching to retire here the most, including Finland, Italy and Switzerland. Portugal was another popular choice for those looking to retire abroad, with five countries choosing this at their top destination. Thanks to the agreeable weather throughout the year, the country is also one of the most popular golfing destinations, with the Algarve region having 31 golf courses alone which is handy if you want to spend your retirement perfecting your swing.

According to the data, those living in the UK wanted to retire in Spain more than any other country in the world. Another country with a large expat community, relaxed lifestyle and up to 3,000 hours of sunshine per year, it’s a great choice for UK citizens looking for a comfortable retirement. 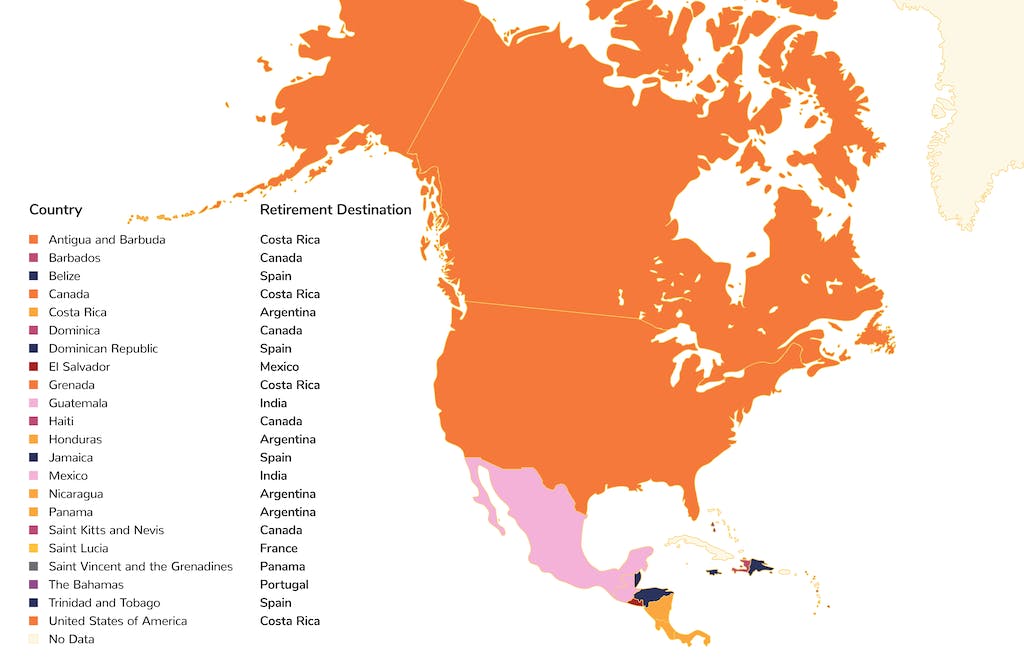 It’s a four-way tie for the most popular retirement destinations for those living in North and Central America. Argentina, Canada, Costa Rica and Spain all topped the list of four countries. Canadians and Americans were searching for retirement prospects in Costa Rica the most, with the affordable cost of living, quality health services, friendly locals and a rich biodiversity the country had a lot to offer people looking for a change in retirement. 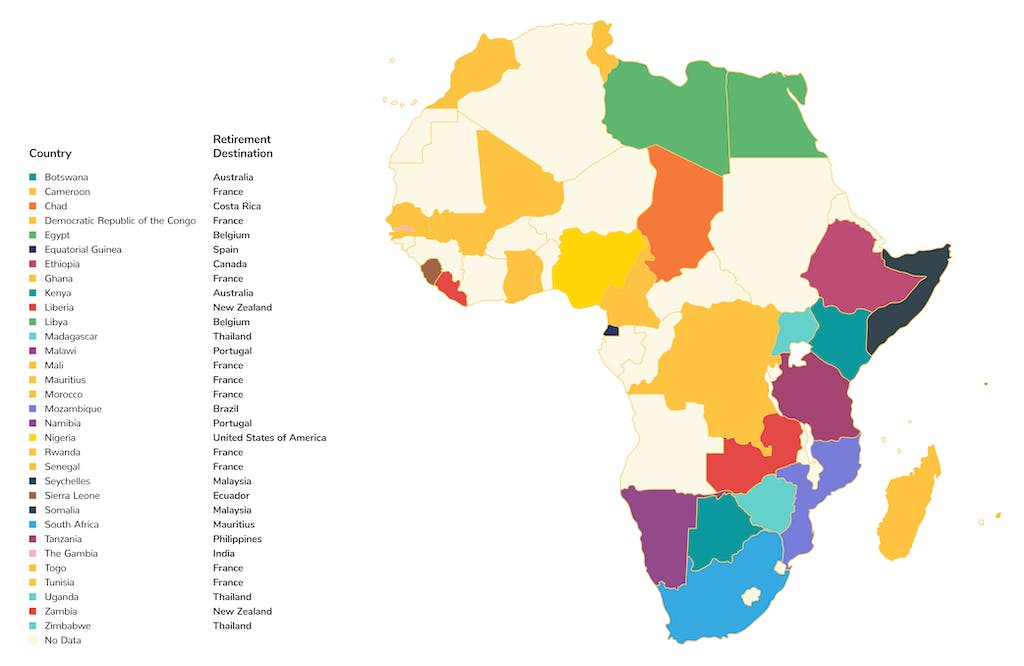 Where do those living in Africa want to retire the most?

France was the top choice for Africans looking to relocate in retirement with 10 countries searching for France the most. French is still a highly spoken language within many African countries, so it makes sense that many people might be looking to retire somewhere they can easily communicate with locals. Relocating to France also opens up the opportunity to explore an entirely new continent and visit other countries that topped the retirement wish lists of some of those in Africa, including Belgium (Egypt and Libya’s top pick) and Portugal, the number one choice for Namibia and Malawi. 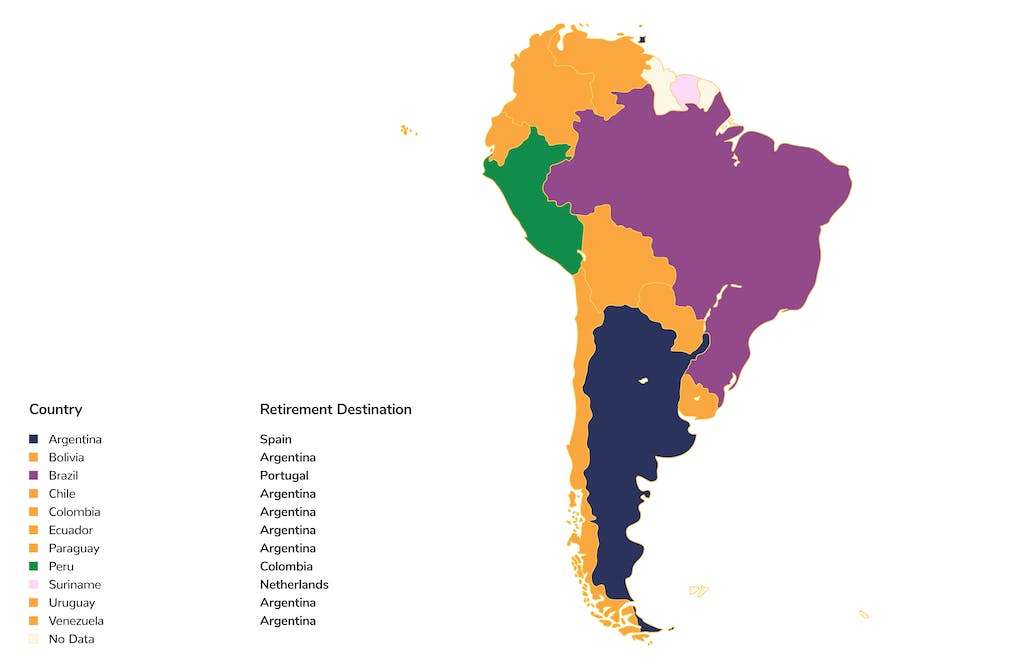 Where do South Americans want to retire?

Argentina came out on top as the most popular country South American’s want to retire to, with seven of the eleven countries in the southern continent searching for Argentina the most. The country boasts a stunning natural landscape and a large range of climates, from polar cold to subtropical temperatures. The cost of living in Argentina is also very affordable and the process of buying a property for a foreigner is a more straightforward one when compared to other countries, making it a strong option for anyone looking to relocate. 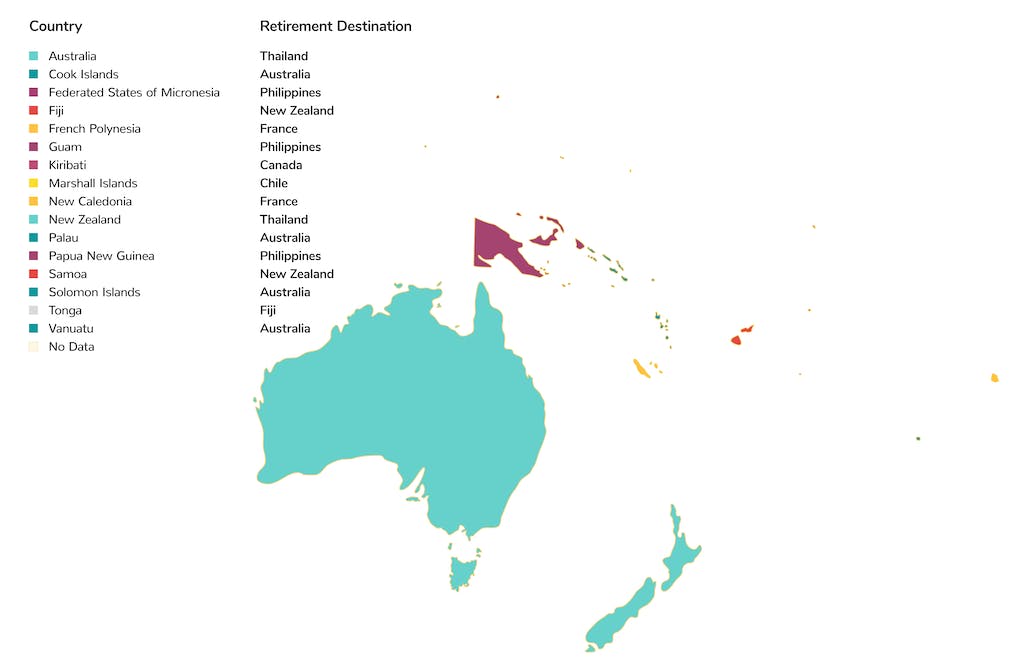 Those currently living in Oceanic countries are most interested in retiring in Australia, with it being the most popular search for four countries. While it can be harder to retire to Australia, due to the requirements needed to qualify for a visa, the high quality of life and typically sunny weather is attractive to a lot of people looking to retire in comfort. Another popular country people want to retire to is Thailand. with the southeast Asian country being the top choice for three Oceanic countries. Known for its tropical beaches, ancient ruins and impressive temples it’s a very popular destination for those looking for a retirement full of adventure. 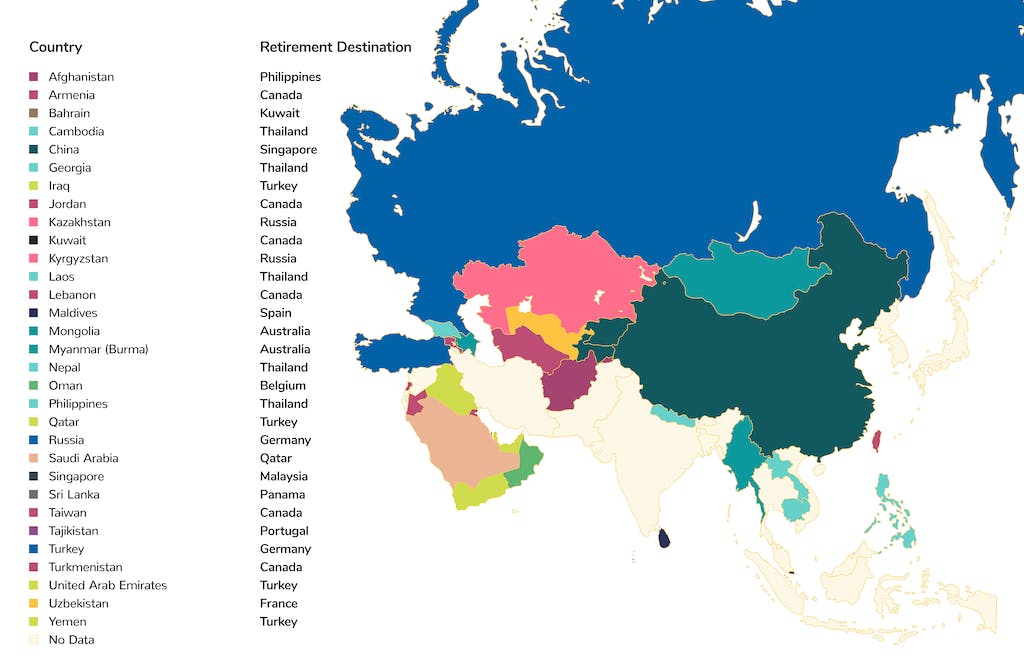 Where do people from Asia hope to retire?

Canada was the number one choice for those hoping to retire abroad in Asia, with six countries searching for retirement in Canada the most. While it might not be the cheapest place to retire, it is known for being a friendly, welcoming and safe destination, making it a popular choice for many. The country is also home to some of the most beautiful scenery and natural beauty spots in the world, meaning there are plenty of opportunities to tick-off items on a bucket list.

If you’re hoping to get the most out of your retirement and settle abroad during your later years then these guides on pensions will help you understand how to plan for the future and help make your retirement dreams a reality.

Top retirement country was found using search data in each country looking at common search terms associated with retiring to another country, such as ‘retirement in [country]’, ‘retire in [country]’ and ‘retire to [country]’.

142 countries were detailed in total, due to certain countries not providing enough search data to be featured.