We all have our own travel bucket lists that we’ve been adding to over the years. Planning and saving up for the But which are the highest-rated destinations according to travellers?
Share this guide

It’s almost impossible to travel to every single one of the spectacular destinations that the world has to offer.

So, to narrow the field a little, we’ve looked at which cities are the best-reviewed when it comes to hotels, restaurants, nights out and things to do.

If you’re looking to go on holiday this summer, be sure to compare travel insurance to explore our best deals. 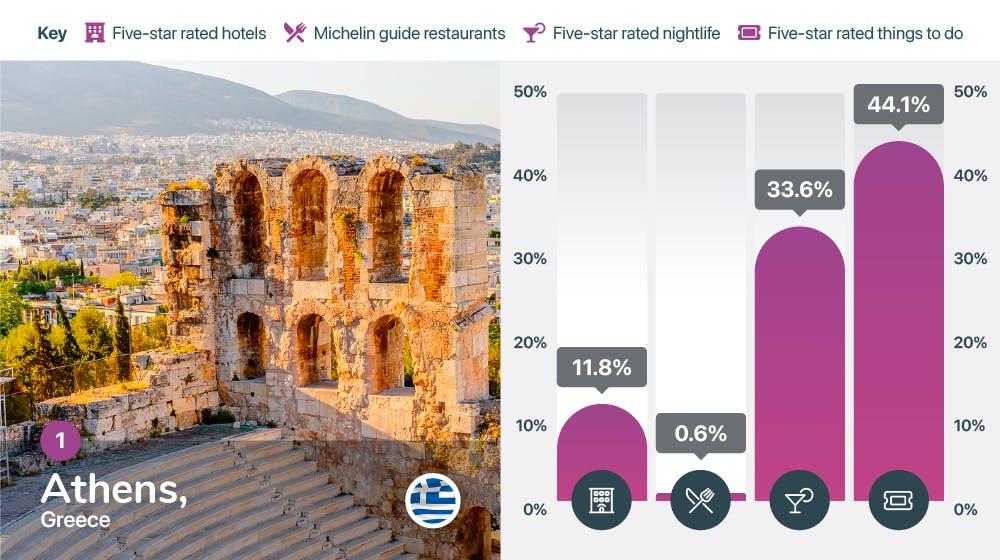 Taking the top spot overall is Athens, where 19.7% of the country's hotels, restaurants, nightlife and things to do were highly rated.

As well as being the top-ranked city for things to do, Athens came in second for both hotels and nightlife.

The Greek capital is one of the oldest inhabited cities on earth, and its rich history has furnished it with some truly stunning places to visit - including the world-renowned Acropolis, which has buildings more than 2,500 years old. 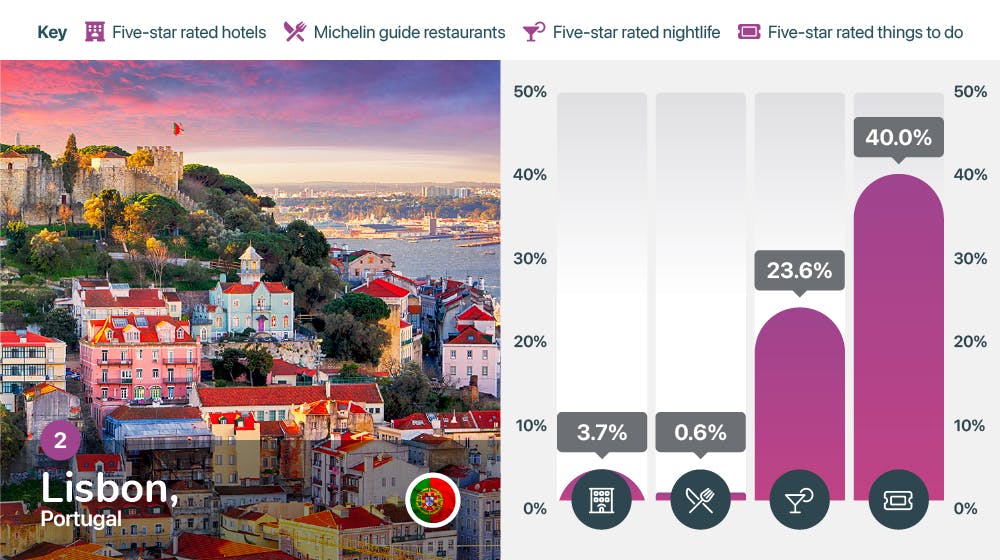 Second place is another European capital, Lisbon. Lisbon is the city with the second-highest number of five-star things to do, with 40% of its attractions receiving this accolade from tourists.

Among them are the imposing São Jorge Castle, which overlooks Lisbon’s beautiful pastel coloured streets, and the National Azulejo Museum.

The city is also known for its excellent food and is only a short journey away from a number of beaches perched on the Atlantic Ocean. 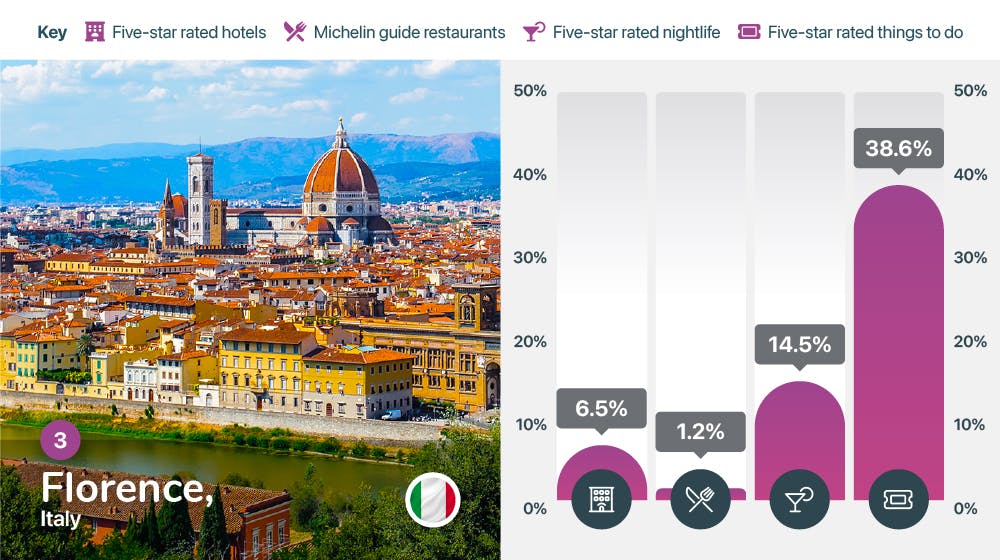 In third place is Florence, in the heart of Italy’s Tuscany region. As the home of the Renaissance, Florence is dripping in history, art, and architecture. While it didn’t score particularly high on any single factor, a strong show across the board saw it take third place overall.

Fans of art and architecture will be right at home in Florence, which is home to the Uffizi Gallery, hosting works from the likes of Leonardo da Vinci and Michelangelo. Other highly rated attractions include the Ponte Vecchio and the Boboli Gardens.

The highest-rated city for hotels

Having a comfortable and relaxing place to lay your head at the end of a long day of sightseeing is the foundation of any good holiday, and the highest-rated city in this regard is Los Angeles, California.

Whether you want to stay in iconic Hollywood hotels of the past or rub shoulders with the rich and famous of today, LA has you covered. 16.9% of the hotels in the city are rated five stars by visitors. 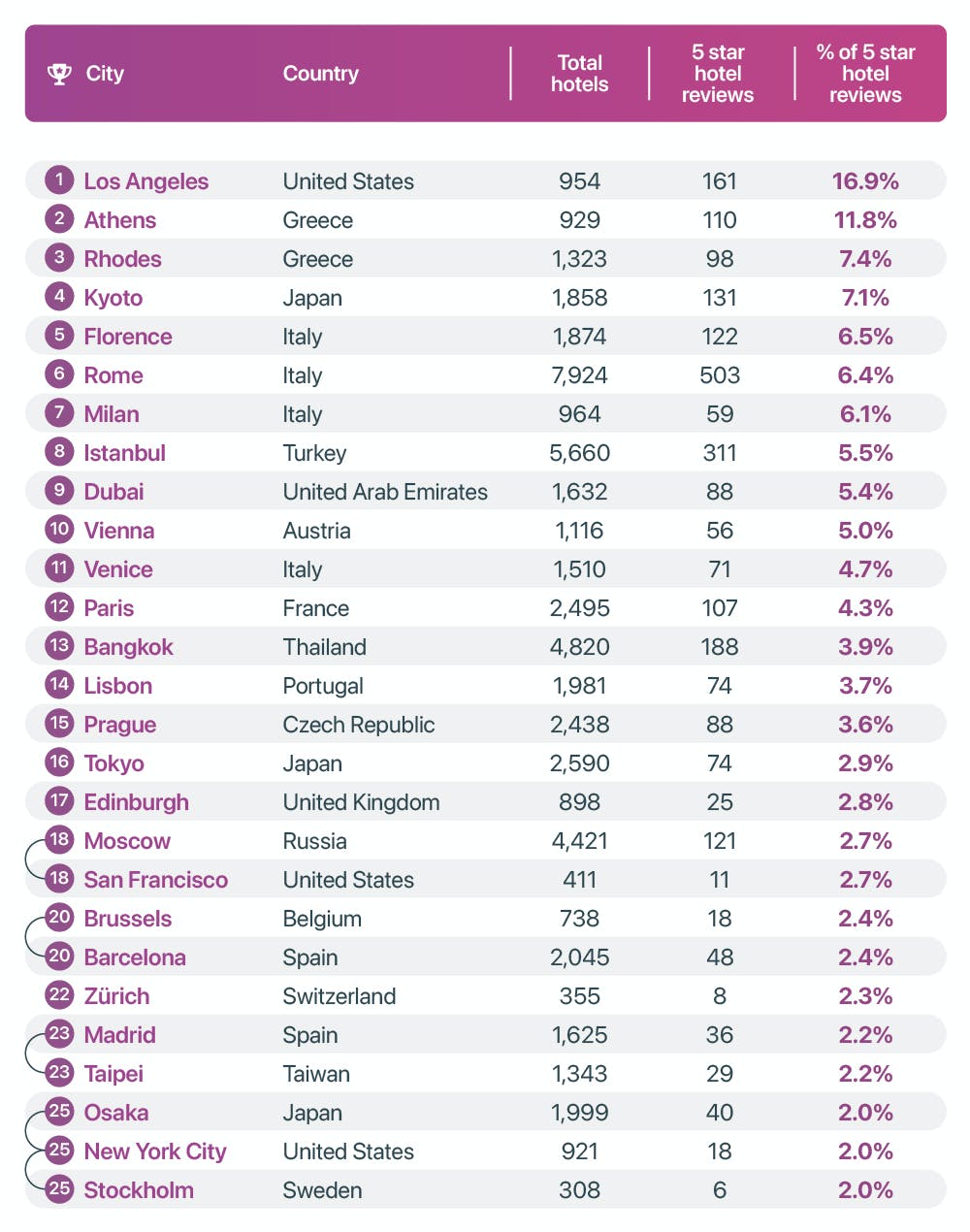 The highest-rated city for restaurants

While cities such as Paris and New York are known for their thriving foodie scenes, it was Brussels that had the highest percentage of Michelin-listed restaurants, with 3.1%.

Within them are three two-star and 10 one-star establishments. The city is also home to a number of cafés and bistros, where waffles, chocolate, fries and beer are amongst the local specialities. 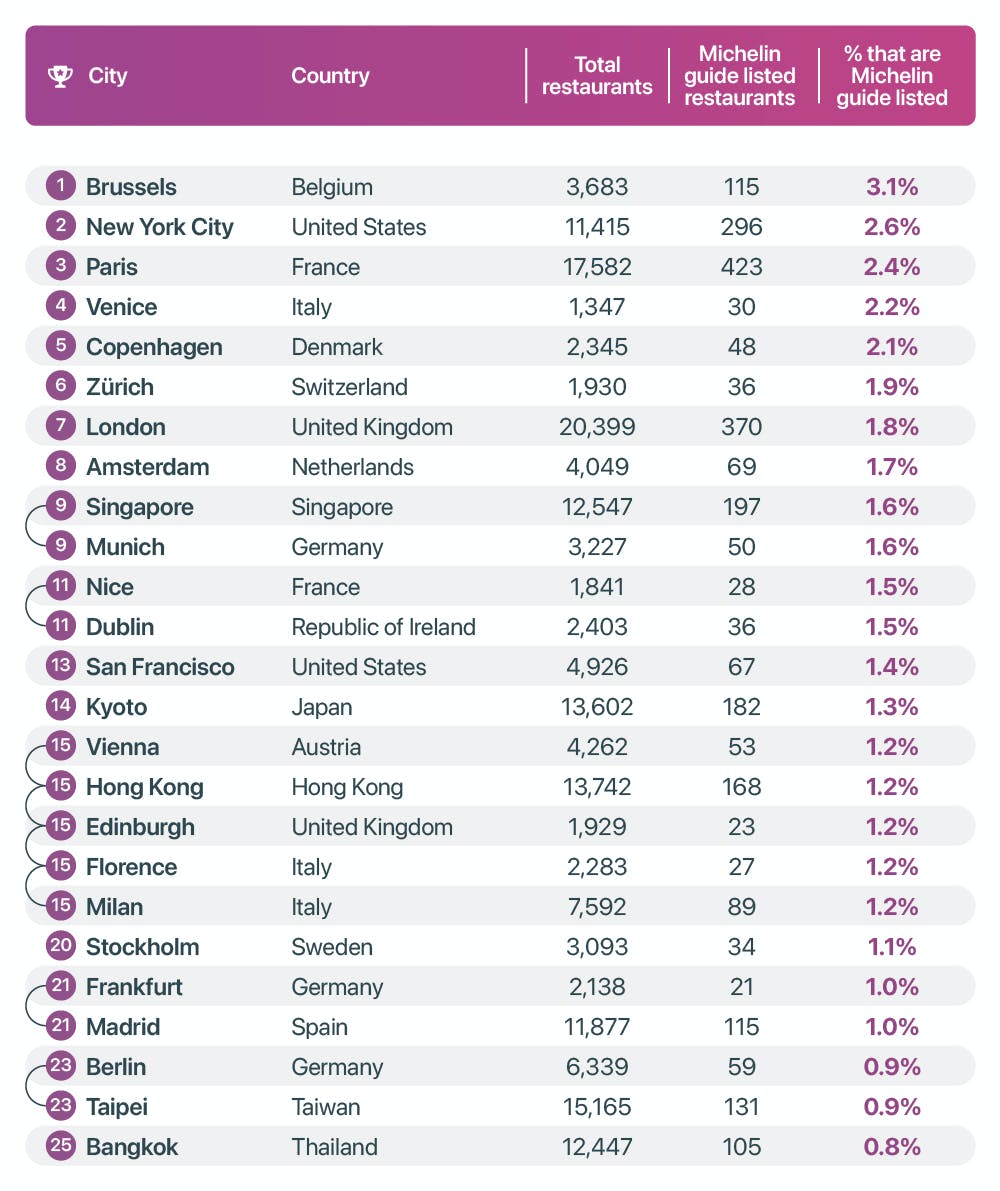 The highest-rated city for nightlife

In terms of pubs, bars and clubs, the destination with the highest ratio of five-star establishments is the Greek island of Rhodes.

Rhodes is a very tourist-oriented destination, with plenty of options once the sun sets on its sandy beaches, whether that’s a quiet beachside bar or livelier nightclubs. 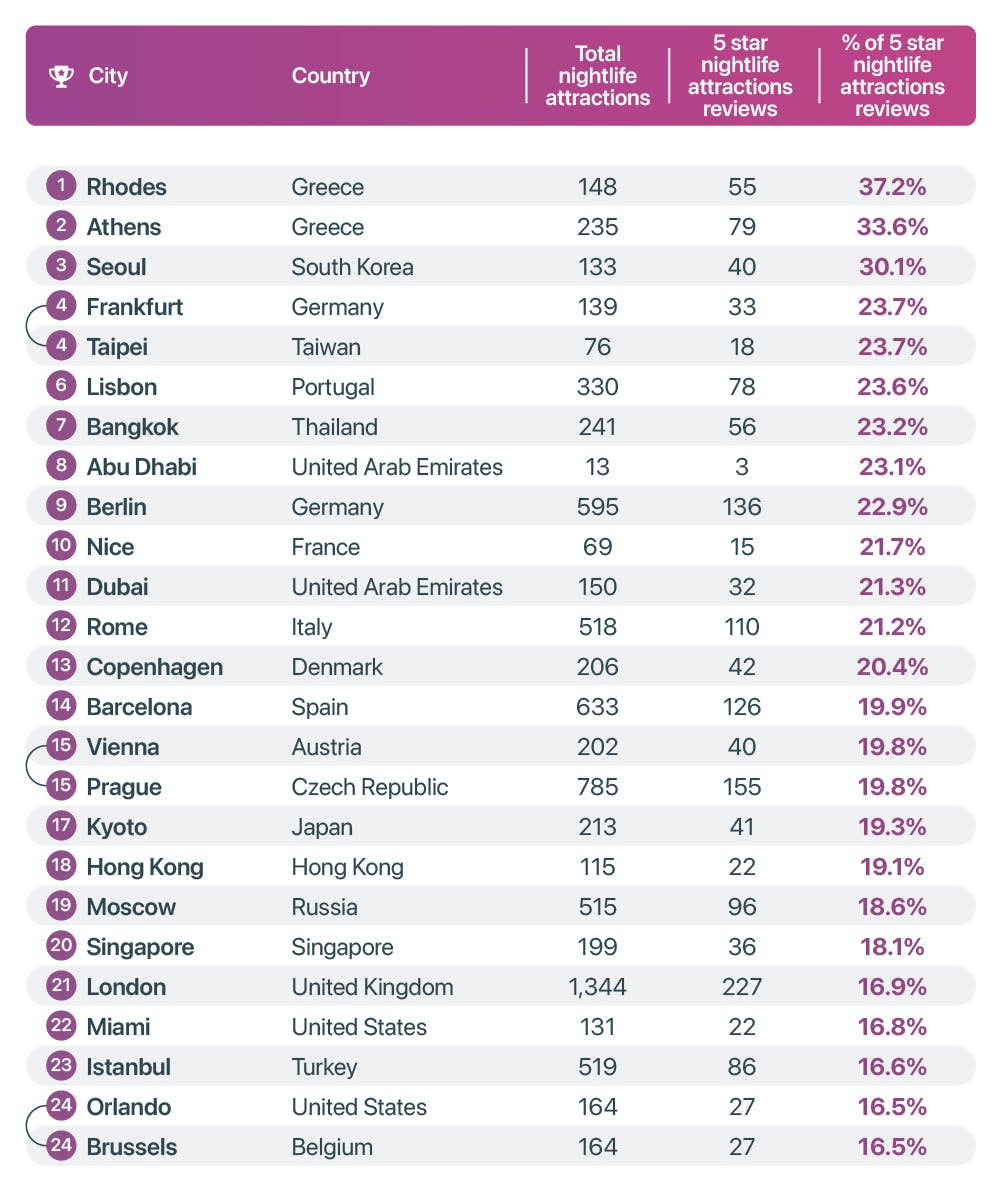 The highest-rated city for things to do

As well as being the highest-rated city overall, the Greek capital of Athens takes the top spot when it comes to things to do - with 44.1% of its attractions being rated as five stars.

The Acropolis dominates the city and is the main attraction for most visitors. The hilltop location is home to ancient landmarks like the Parthenon temple, as well as the Acropolis Museum, housing artefacts from the site. 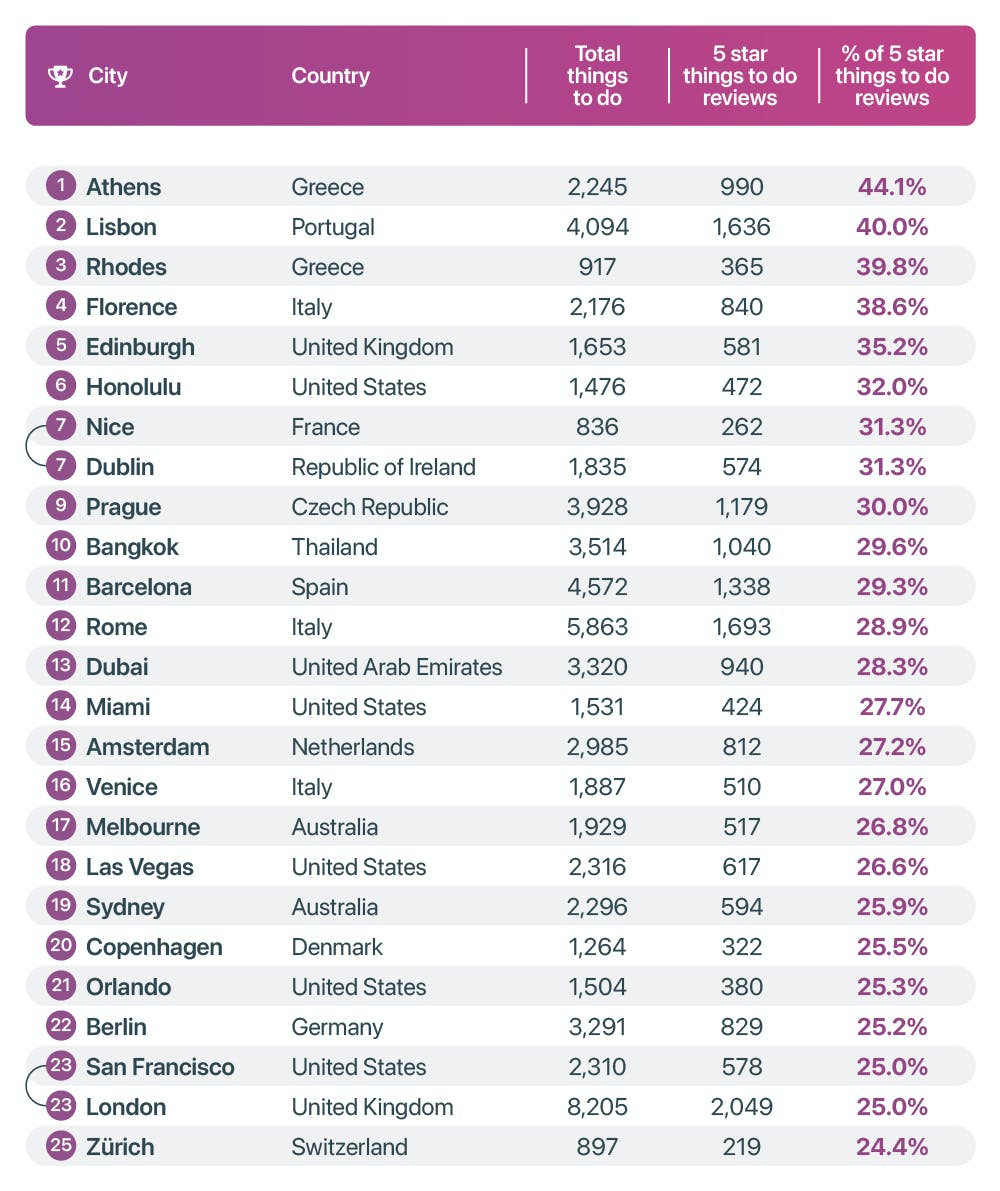 If you’re looking to live in the lap of luxury on your next break and experience some of the very best things to see and do while you’re away, then you may want to consider checking out some of the destinations above!

Looking at the 50 most visited cities in the world according to Euromonitor International’s Top 100 City Destinations Index 2021, the following four factors were sourced from Tripadvisor.

The percentage of hotels with a five-star rating.

The percentage of places listed under Tripadvisor’s ‘Nightlife’ category with a five-star rating.

The percentage of attractions listed on Tripadvisor with a five-star rating.

The percentage of restaurants that are Michelin Guide listed (according to Tripadvisor).

A total of all the reviews and rated places across all four categories was then taken to create the overall ranking.

In light of recent events money.co.uk has decided to exclude cities in Russia from its ranking.