What are my rights if my flight is cancelled because of airport strikes?

We explain everything you need to know about strike actions; from what to do if your flight is cancelled to making a refund claim.
Share this guide 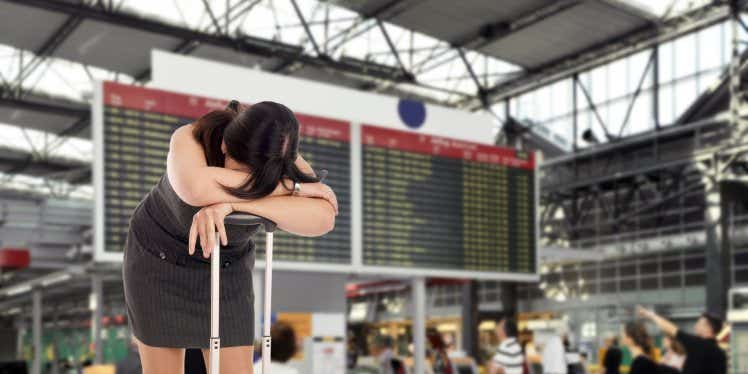 Will my flight be affected?

Airports never want to see a strike go ahead as it can affect their reputation and costs them money. But even when airport strikes do happen, airport teams will work to keep disruption and cancellations to a minimum. This includes working with legal teams to negotiate away from strike action and training extra staff.Your flight may be affected either way so it's important to check with the airline directly.

How can airport strikes and cancellations affect me?

Industrial action can be taken over pay disputes and take place around busy travelling times to disrupt the running of the airport.

Not all flights scheduled for departure during industrial action will be affected but, if there is a flight strike, it could mean your pre-booked flights might be delayed or cancelled.

If there is an airline strike and you were informed of it less than 14 days ago, you are due compensation.

Should I book a replacement flight now?

If you book a replacement flight before you have found out whether the flight strike happens, you may be left footing the bill for two tickets.

It is generally best to look around to find a suitable flight, but hold off paying out until you know for sure you will need it and will be granted a refund.

Should I cancel my flight now?

If you have a refundable or flexible ticket, it is your decision whether you are prepared to see if your travel plans will be affected before you cancel or reschedule your flight.

If you have a non-refundable ticket and have not received confirmation from the airline that your flight will be affected, you should not cancel your booking.

Doing this will mean that you lose the chance to claim a refund if your flight is cancelled and will lose your place on a flight.

Can I get a refund if my flight is cancelled?

According to EU regulations, if your flight is cancelled because of strike action you are entitled to one of the below:

Compensation is due if you were informed less than 14 days prior to the scheduled departure date.

You can't rebook or claim a refund (unless you have a flexible or refundable ticket) until the dates of the strike are announced and the airline have confirmed your flight will be affected.

What are my rights if there is a flight delay due to strike action?

If there is a large delay delay, the airline has to make your wait a reasonably comfortable one.

You will be entitled to a phone call, refreshments, a meal, accommodation and transport to the accommodation. Your flight must be:

Your airline should provide these for you. If not, keep any receipts and contact its customer service to make a claim. If your flight is delayed by more than five hours you are entitled to:

How do I claim compensation for airport strikes?

If you do not get compensation at the airport, you can claim from the airline's customer services department later so remember to keep copies of any receipts for expenses incurred as a result of the cancellation or delay.

Contact the airline operating the flight, even if you booked through another airline. Check this on your booking confirmation first and make sure you have all your flight information and booking details - including the card you paid with.

Remember that airlines only pay for 'reasonable' expenses, which might not cover items such as expensive meals or hotels.

You can't claim for your cancelled flight on your holiday or travel insurance as the airline will offer a refund or alternative booking. However, if there is an airline strike, insurance should cover any other losses, such as missed hotels, car hire or train tickets.

This will depend on your travel insurance provider's policy on cancellation due to strike action and the level of cover you have in place.

Some travel insurance providers will only pay out for claims on policies that are:

How will I be notified?

If you booked your flight direct with the airline, they should notify you of any plans affected by the flight strike.

They will contact you using the details you provided when you booked your tickets so it is always worth double checking that you entered these correctly too. The airline should post information about cancelled flights on their website and app.

Remember that compensation is due if you were informed less than 14 days prior to the scheduled departure date.

If you have not heard anything but know you will be travelling during strike action contact the airline in advance to make sure you can travel as planned.

If you booked your flights as part of a package deal, the tour operator will be responsible for issuing a refund or finding alternative flights so you should contact them to find out their plans.

What about my hotel and onward transport?

It is unlikely that the airline will pay for non-refundable hotels or onward travel bookings that are affected by strike action. Instead, you will need to rely on your travel insurance.

It is always worth speaking to the company you booked with directly to see if they are able or willing to move your reservation free of charge.

Will I be able to claim any other compensation?

Unfortunately, it is unlikely that you will be able to claim for compensation for a cancelled flight, or onward travel plans, as EU Regulations class strike action as extraordinary circumstances which the airline has no control over

Providing the airline offers a refund or replacement flight, they do not need to pay out anything in the way of compensation to customers who are affected.

What if I paid on credit card?

It is unlikely that you can recoup the cost of your affected travel plans under Section 75 of the Consumer Credit Act 1974. This is because the fault lies with the airline whose staff called the strike and not with the company you booked with.

When can you use section 75 to get a credit card refund?