Britain’s iconic high street has faced many challenges over the years, none greater than the coronavirus pandemic. But its resilience and chameleon-like ability to change has meant that despite devastating losses it is far from being lost.
Share this guide

As consumers begin spending again, brands will have to adjust to the new requirements and demands of a post-coronavirus shopper. The brands that survive will be those who embrace change. The brands that struggle to adapt will face a very uncertain future and may disappear from the high street forever.

To celebrate its history, review the impact of COVID-19 on present day high street brands and envision what the high street could look like in the next few years, the consumer spending experts at money.co.uk have created The 2020 High Street Report.

The birthplace of the high street

Using data gathered on 110 of the UK’s favourite brands*, we have mapped the founding locations to find out which region has produced the most high street names: 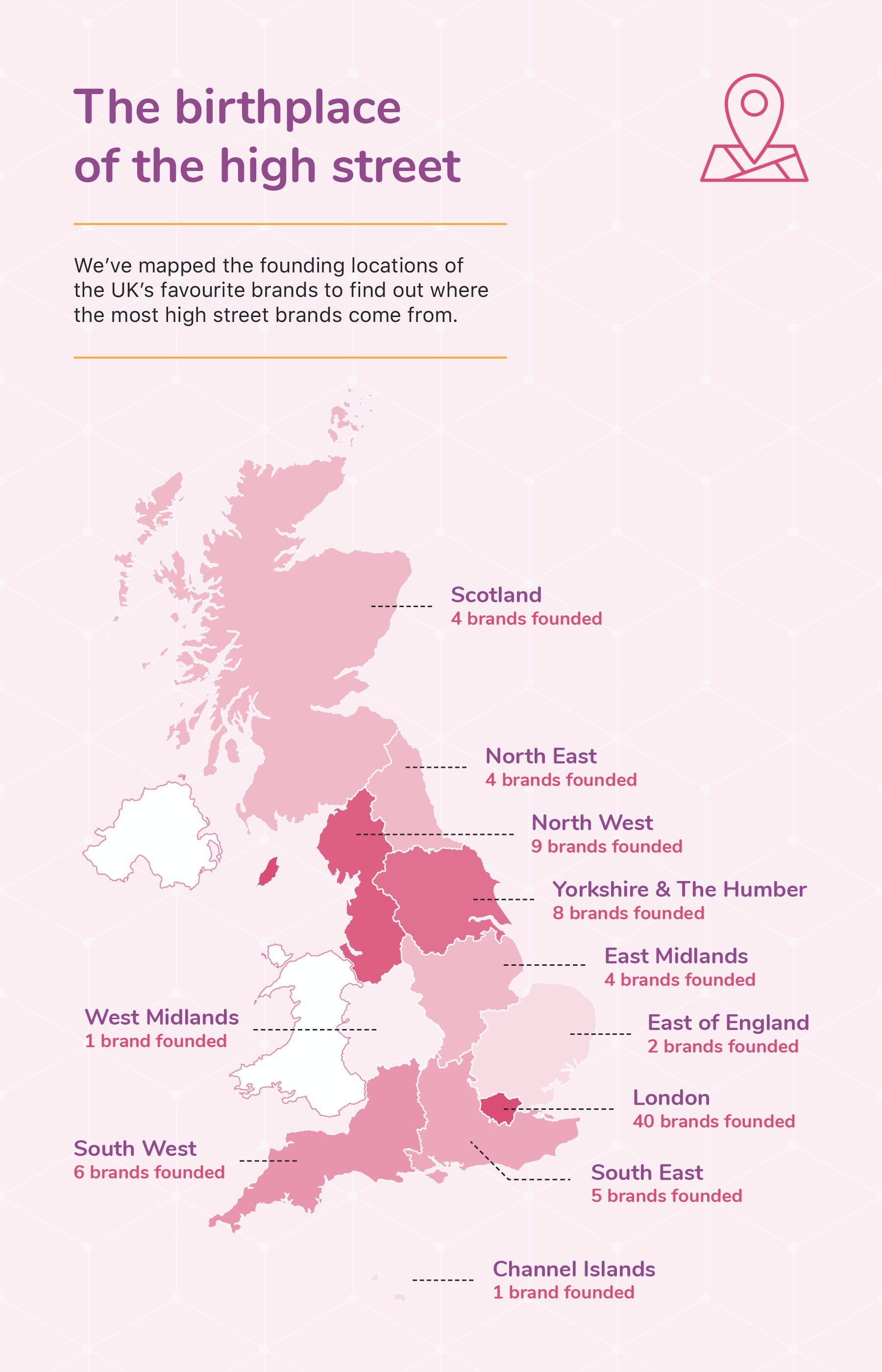 Outside of the capital, the North West is the home to the second highest number of top high street brands, accounting for nine of the brands we know and love - including retail powerhouses JD Sports, Matalan and jeweller H. Samuel.

Here’s the breakdown of where the most popular UK brands* originate:

Meanwhile, 19 of our most loved high street brands hail from outside the UK: 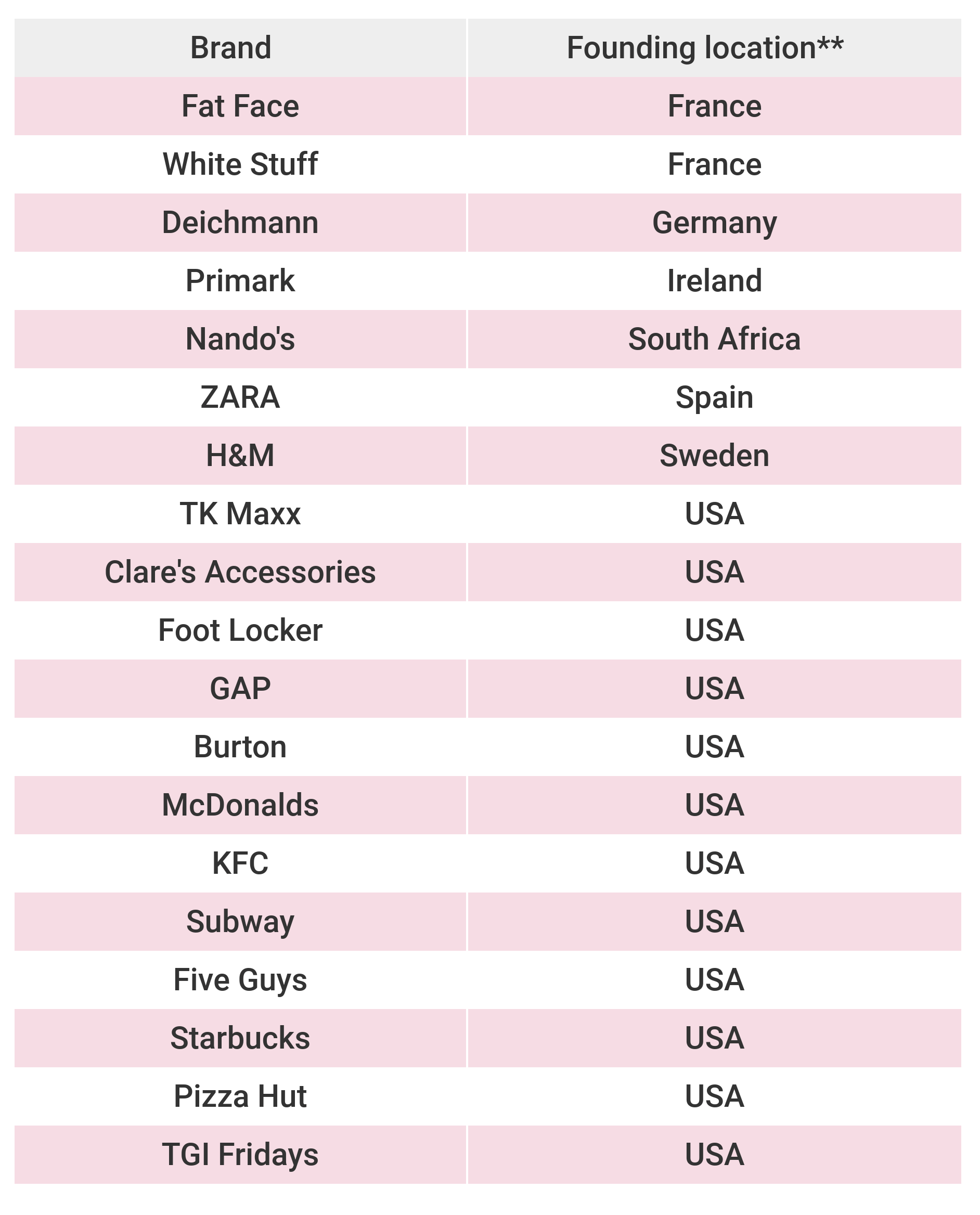 How many stores do these brands have together across the UK?

Our study used the locations of the stores to determine where the most high street brands come from, but which region has given the UK the largest number of stores?

With 40 brands established in the capital, it’s unsurprising that brands founded in London have by far the largest number of stores across the UK, at over 9,800.

Meanwhile, despite only being home to four high street brands, the North East of England ranks second for the highest number of UK stores. Boosted by the likes of Tyneside-founded Greggs, which has almost 2,000 branches, the North East has given the UK over 3,100 stores.

Surprisingly, the Channel Islands ranks in 10th place, ahead of Scotland, despite our study only noting one high street brand originating from the region. Specsavers, known for their sight and hearing services, was founded in 1984 on Guernsey and has since opened over 800 stores in the UK.

Here are the number of branch stores broken down by the region they were founded: 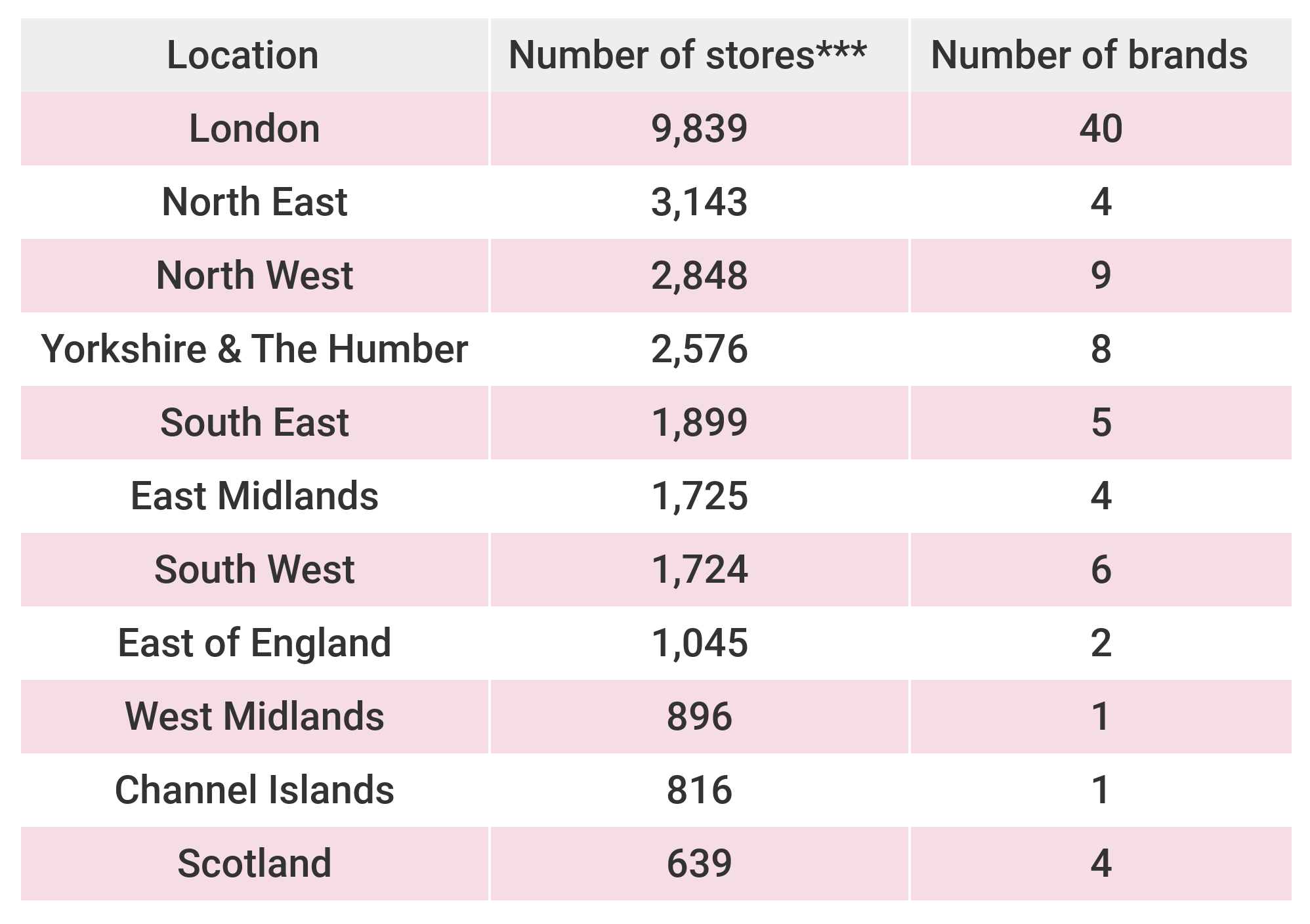 Out of the 20 oldest UK high street brands in our study, 18 have their origins in England, with 10 of these being founded in London.

The oldest brand in our study is the jewellery chain Goldsmiths, which was founded in Newcastle in the late 18th century. H. Samuel and Ernest Jones, two other high street jewellers, are also within the top 20 oldest UK brands.

Despite these brands standing the test of time for several hundred years, five of the UK’s oldest high street names - Debenhams, Ernest Jones, H. Samuel, John Lewis & Partners, and Laura Ashley - have announced permanent closures of some or all of their stores during lockdown. 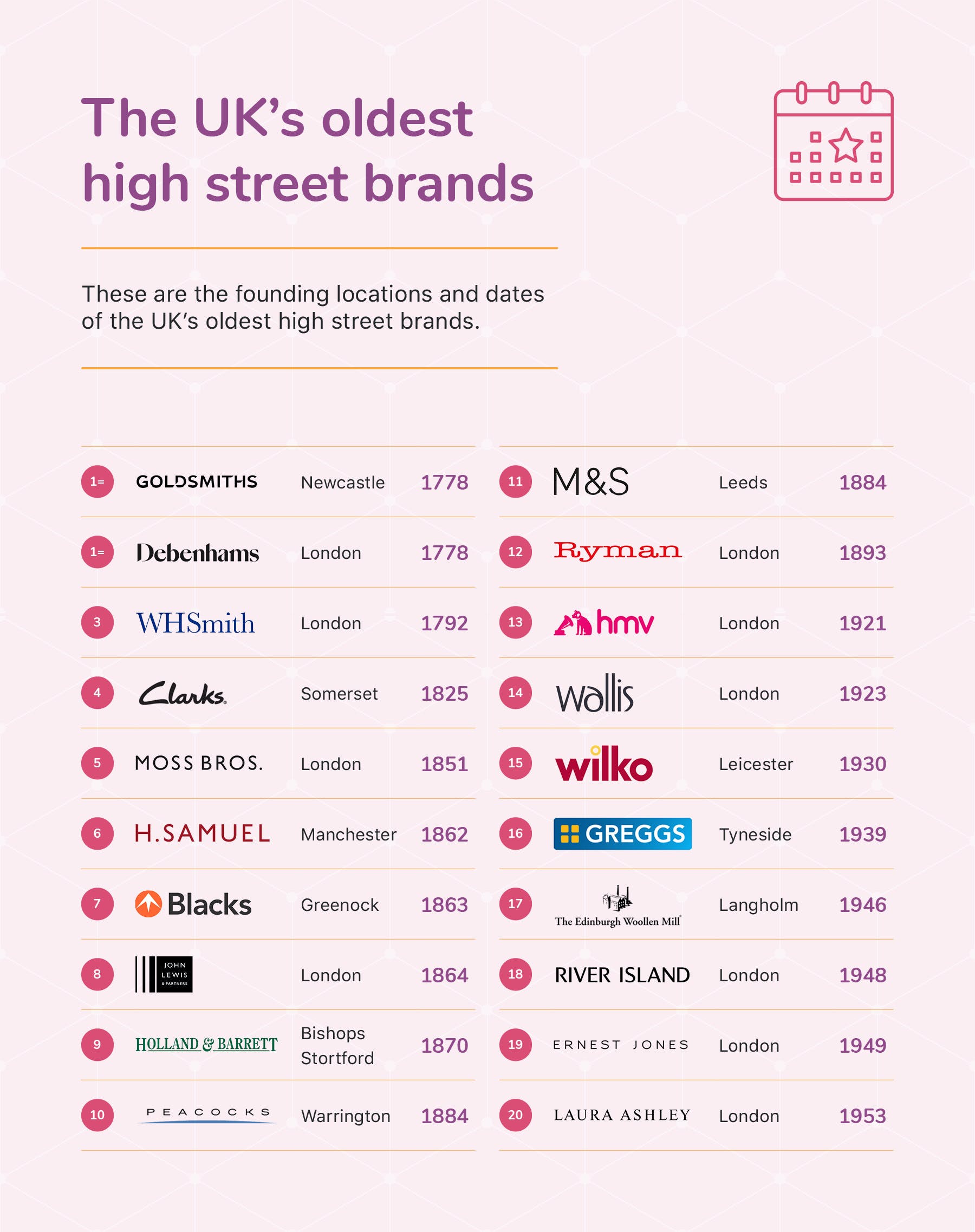 How COVID-19 closures have affected the high street

Even before the coronavirus pandemic, the UK’s high streets were facing massive pressures, along with some tough questions about their collective future. The rise in convenient online retail combined with tough post-Christmas trading and controversial business rates rules, had already placed many in a difficult position.

However, the lack of footfall during lockdown and the continuing costs associated with renting bricks and mortar stores, has put a larger strain on the already struggling high street.

With high streets reopening as lockdown restrictions are lifted, money.co.uk has analysed which brands have weathered the COVID-19 storm, and those who have sadly been unable to keep operating.

According to the analysis from the Centre for Retail Research (CRR), 38 medium and large UK retailers have gone into administration or significantly scaled back their operations this year. The majority of these firms went bust after the COVID-19 lockdown came into force in mid-March.

We analysed the collapse of ten high street brands, and where their stores have been closed or put at risk, to identify which area of the UK will be hit the hardest by the closures.

Store closures across the UK

Here, we’ve examined brands which have over 50 stores and where we can confirm the locations of the stores: 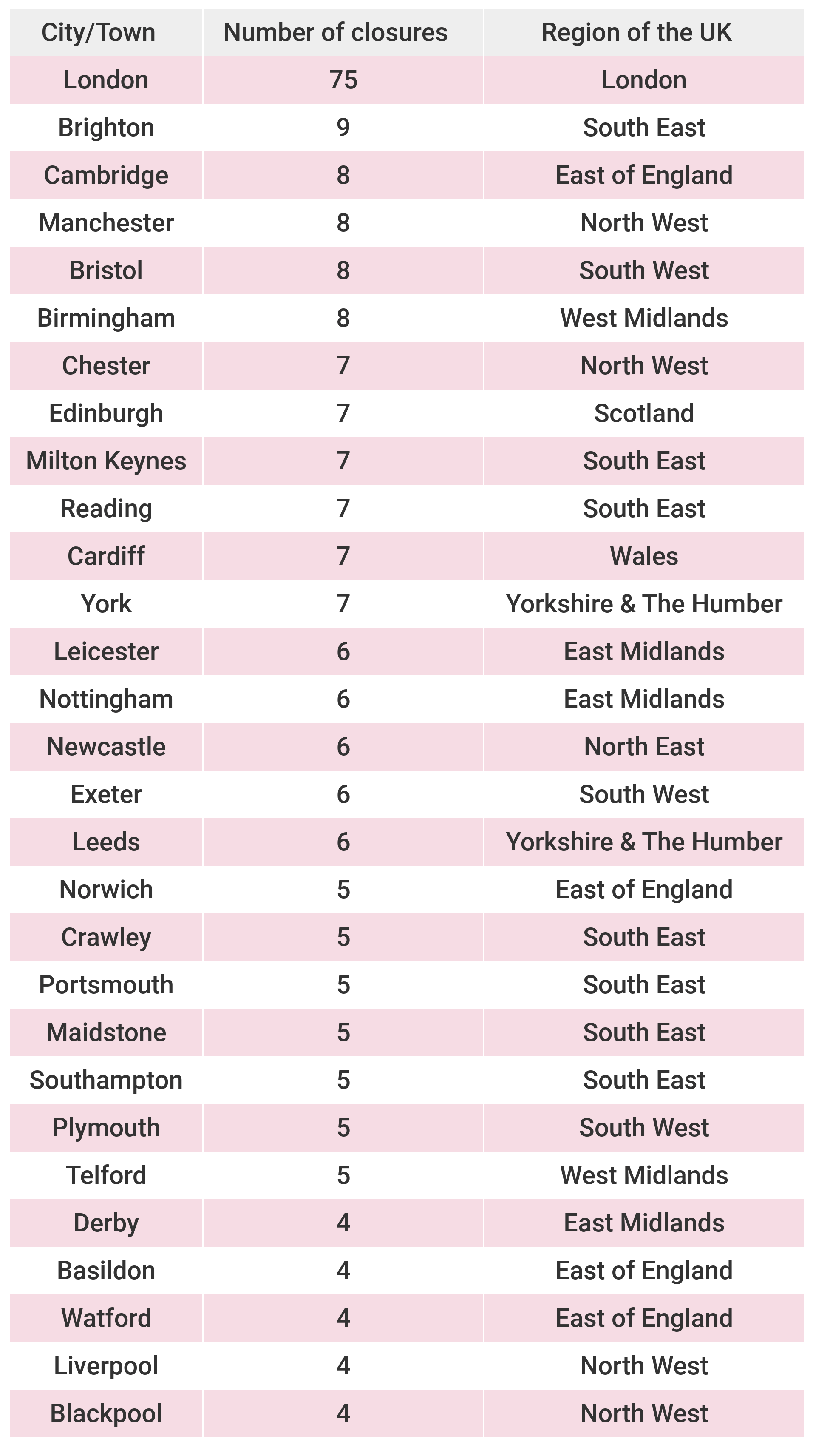 We’ve grouped the affected towns and cities into regions. Despite London being the worst affected town/city, when considered in comparison to other regions of the UK, the South East of England is expected to have the most vacant high street units. 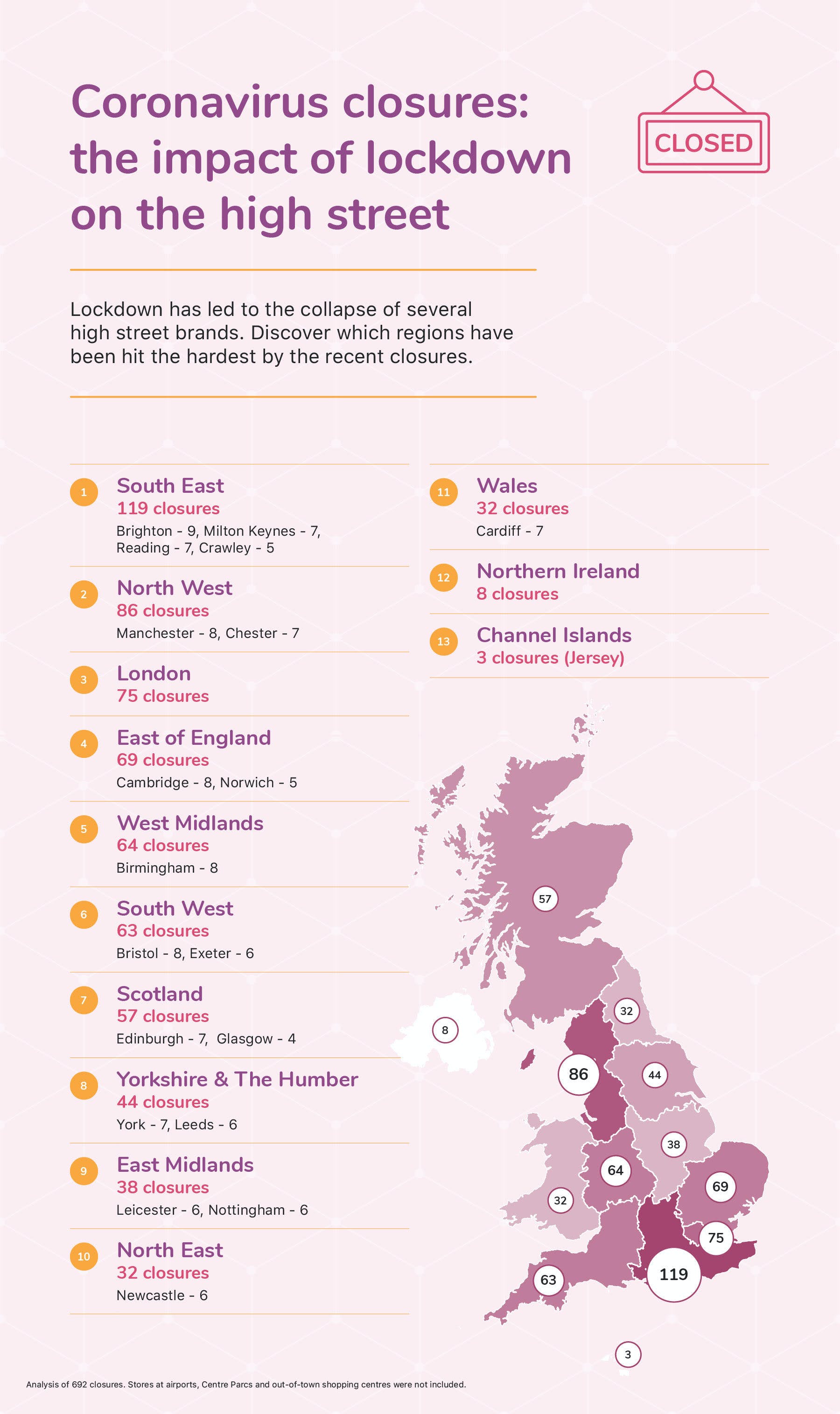 The future of the high street

Although the picture looks pretty bleak for retailers and hospitality businesses operating from bricks and mortar stores, the empty spaces left by high street shops and restaurant chains does present an opportunity.

Different businesses can now make a greater mark on our much-loved shopping streets.

Here are the four trends, which suggest what the high street may look like in the future:

Almost three in five British consumers have made more use of local stores in their area to help them through the Coronavirus lockdown, according to research from business consultancy Deloitte Digital.

The study from late May 2020, also found that almost the same proportion said they will be more likely to spend at shops offering locally-produced goods once the lockdown has fully lifted, compared to before the pandemic hit.

Retailers who are able to offer a better customer experience beyond just online delivery are likely to be in a strong position once lockdown measures are eased.

Fashion retail offers an interesting glimpse into the future. While online ‘fitting rooms’ are increasing in popularity, one emerging trend is the introduction of physical fitting rooms at ‘click and collect’ points.

This means that customers can quickly try on clothes and return them easily if they are not quite right. This approach has the added benefit for retailers of getting stock returned quickly and in great condition, ready to be put back on sale at full price.

Elsewhere, Argos has seen an 8% jump in sales made using the ‘click and collect’ function in the year to 7 March 2020, according to the company’s latest annual results.

A third of Brits say they’ll spend more on eating out than they did before lockdown, according to polling from YouGov in May.

Meanwhile, research from mid-June also found that punters will be much keener to use pub gardens than to eat and drink inside these facilities.

With more people excited about experiencing hospitality outdoors, it looks like Al Fresco dining could be the way forward in a post-COVID world.

Even before the pandemic hit, shoppers and diners had been making their voices heard about how goods and services end up in their hands.

Customers’ concerns about sustainability, treatment of supply chain workers, and farming standards have been a powerful force in changing the behaviours of retailers and the wider service sector.

Some 24% of consumers surveyed by EY Future Consumer Index in April said that they will pay more for ethical products.

A separate study found that 64% of its 3,000 respondents (across 15 countries including the UK) were focusing more on limiting food waste and would continue to do so after the pandemic is over.

The research, carried out by the consultancy Accenture last month, also found that shoppers are prioritising personal hygiene and cleaning products, while spending less on fashion, beauty and consumer electronics.

The coronavirus pandemic has undoubtedly altered the way in which we shop, interact and live our day-to-day lives. As non-essential shopping has shifted from a leisurely activity to one which comes with social-distancing restrictions, it is unsurprising that some businesses have struggled to stay afloat.

The long-term impacts of coronavirus are yet to materialise, but one thing for certain is that the pandemic has changed the great British high street forever.

Where the high street may once have been home to major fashion and retail brands, shifts in consuming spending may see the spaces repopulated with sustainable and ethical stores that cater for a new way of shopping.

As online shopping sales continue to boom, click-and-collect may find itself a permanent fixture on Britain’s high streets.

Instead of large chain restaurants, individual eateries with outside space may suit the British public as they look to buy local and stay socially-distanced.

Although its appearance and the brands which live on our shopping streets will change over the coming years, the role of the high street as a central pillar for leisure and employment will continue to live on in one form or another.

Paying on the high street

If you’re planning to head out to the high street in the coming weeks, you’ll likely be encouraged to use contactless payments in order to minimise the contact with retail staff.

If you are planning to borrow money to finance your shopping, you could consider a credit card. A credit card requires regular repayments and can accrue interest if you do not pay back the full amount.

According to a report by the Ordnance Survey and the Office for National Statistics, there are approximately 6,969 individually-named shopping streets in Great Britain.

The Ordnance Survey defines a high street as 15 retail units within 150 metres.

We have defined a high street brand as one that has over 50 stores across the UK.

Brands which are not traditionally found at industrial/retail parks such as, large DIY retailers were not included in the report.

We define the most popular retail brands using seed lists from YouGov.

** Founding locations were taken from the brands' own website or verified by third party reports. Seven brands' founding locations in the UK could not be found and were not included in this analysis.

*** Information regarding the number of stores was taken from the brands’ ‘about’ page or 'careers' section. Where this has not been possible, we have aimed to verify the founding location using multiple third party articles. Numbers are pre-coronavirus closures.

Information regarding the founding dates and locations where possible were taken from the brands’ ‘About’ page or careers section. Where this has not been possible, we have aimed to verify the founding location using multiple third party articles.

When dating the founding of a business we have, where possible, used the earliest trace of the company.

Groups such as, The Casual Dining Group and Arcadia, which own several brands, have been separated and treated as individual high street brands.

In order to calculate which region has given the UK the largest number of stores, we analysed the number of UK stores for each brand. Information regarding the number of stores was taken from the brands’ ‘about’ page or 'careers' section. Where this has not been possible, we have aimed to verify the founding location using multiple third party articles.

Starting with the list of Who’s Gone Bust from the Centre for Retail Research, we filtered the list to only include those which have gone bust during lockdown, and those which have over 50 stores across the UK.

We collated the store lists from the brands' website, or where this was not possible from third party reporting. The sources we used are cited below.

For some brands it was not possible to confirm the locations of their stores and we have not included these in our report.

When analysing the locations of the closures/stores at risk, we removed those which were in out-of-town shopping centres, airports and Centre Parcs.