To find out which platform might be best if you’re looking to take your career online, our personal finance experts have analysed some of the biggest creative platforms to find out what percentage of earnings they take from their creators.

Platforms which take the highest commission (%) 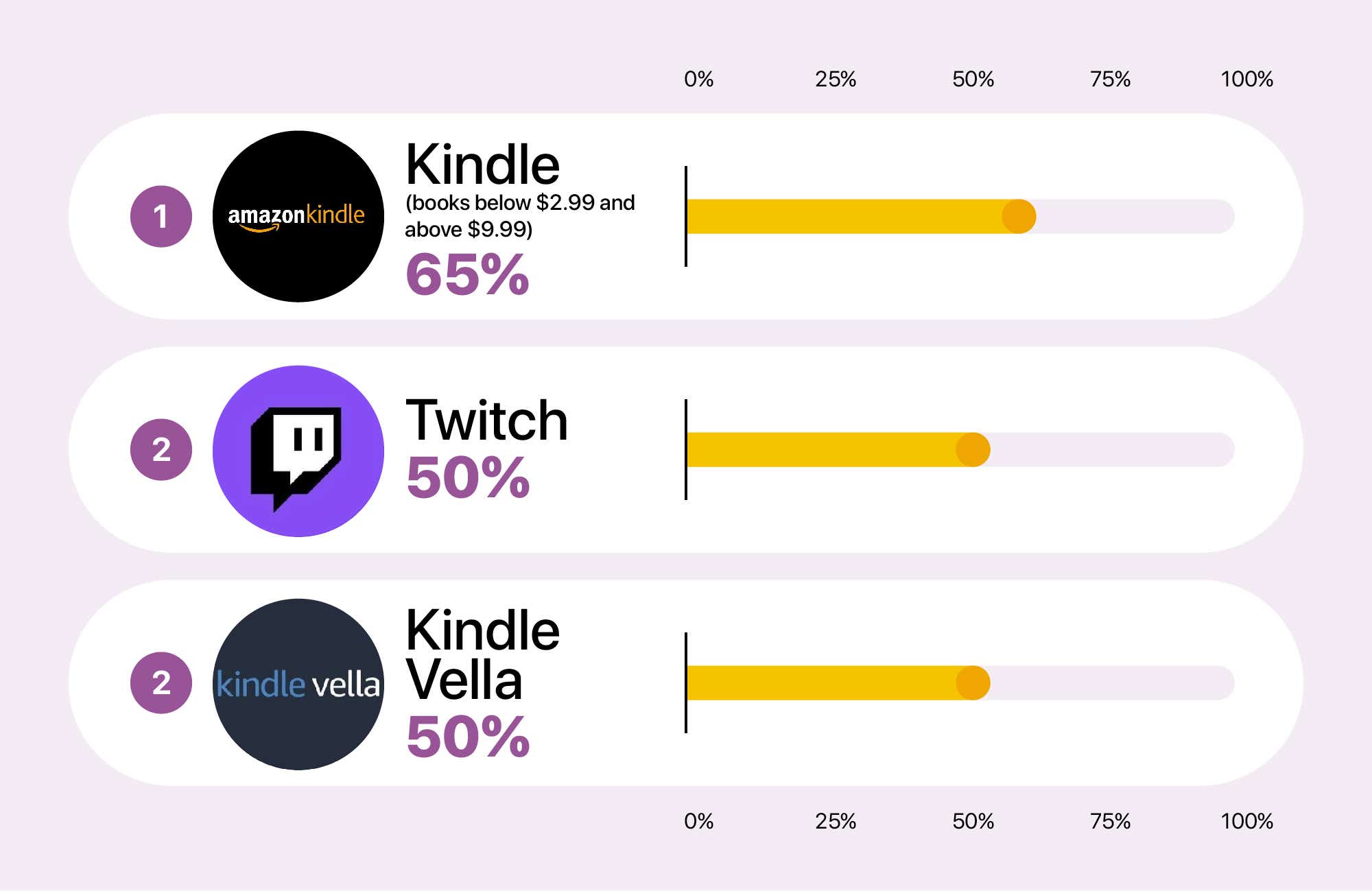 For aspiring writers, getting your book published on Kindle is a great way to reach huge audiences, but depending on the pricing of your book, you could find yourself giving up a large portion of your revenue.

To make money on Twitch you first have to become a Twitch affiliate, but once you’ve done so you can start earning via ads, paid subscriptions, and donations from fans.

However, this comes at a cost, with Twitch taking 50% of the subscription fee.

Another service that takes half of its creators’ earnings is Amazon’s Kindle Vella. Vella allows writers to have their stories published, which readers can then read chapter by chapter by spending tokens.

Amazon then keeps half of the fee spent on tokens, although there’s a complication here, as readers can buy more tokens for cheaper if they buy larger amounts, so the actual amount received by the creator can vary.

The platforms with the highest commission

The types of platforms with the highest commission 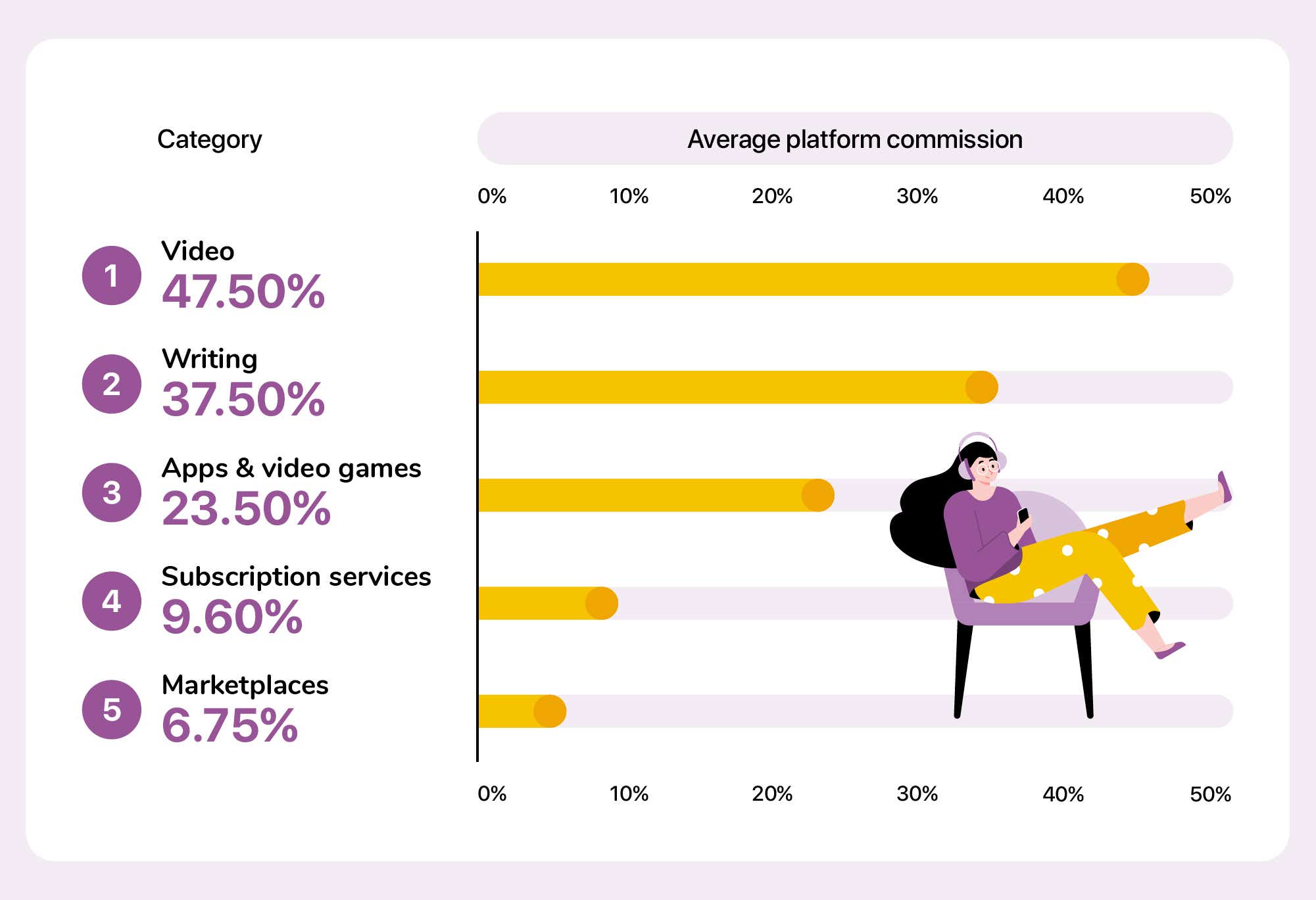 Of the platforms that money.co.uk looked at, it was video hosting and streaming sites that, on average, took the largest cut from creators, at 47.5%.

YouTube is perhaps the most popular platform for budding video content creators, and takes 45%, with Twitch taking the most, at 50%.

Online platforms provide aspiring writers a great opportunity to have their work published and a way to make money from their work.

Apps like Kindle, Kindle Vella, and Tumblr’s Post Plus allow writers to get their work out there, but the fees can be on the higher side, especially with Kindle, which takes a cut of up to 65%.

Budding developers can make a lot of money by having their app featured on stores such as Apple’s App Store and the Google Play Store, but doing so can come at a large cost.

The average commission charged by these stores was 22.5%, although the fees can actually be higher for bigger developers.

For example, in the case of Apple, most developers pay 15%, but this doubles to 30% once the app reaches $1 million in net sales.

There are also lots of ways for indie game developers to get their games published, through the likes of Steam, the Epic Games Store and the stores of both PlayStation and Xbox.

The commissions taken by these platforms have come under particular scrutiny in recent years. In particular, Steam’s cut of 30% was criticised by many in the industry, although later reports suggested that such a percentage is actually relatively aligned with the industry average.

Subscription services can cover all manner of types of content, and the commissions they take also vary a lot too.

For example, Patreon is one of the most popular of these services, allowing creators to charge fans a fee to receive more content from them. Patreon takes between 5% and 12% from creators, depending on their plan.

OnlyFans is one of the more controversial of these platforms and also takes one of the highest cuts, keeping hold of 20% of creators’ earnings.

For those who still prefer their art to be real, physical pieces, there are also lots of avenues to sell their goods online.

The commissions taken by marketplaces are relatively modest in comparison to the other online platforms, with an average of 6.75%, with the likes of Etsy charging just 5%.

How commission taken by platforms could affect creators

Online platforms have become multi-billion dollar businesses in recent years due to the influx of online creators and advertising.

Interested to find out how much money online platforms could be making from the biggest names in the content creation industry, we’ve taken a look at some of the most followed influencers on YouTube and Twitch.

The most followed person on YouTube is PewDiePie, with over 110 million followers and estimated earnings of £10.2k ($14.2K) per video and £44.7 million ($62 million) over the course of his career.

How much could YouTube have earned from the top 10 channels? 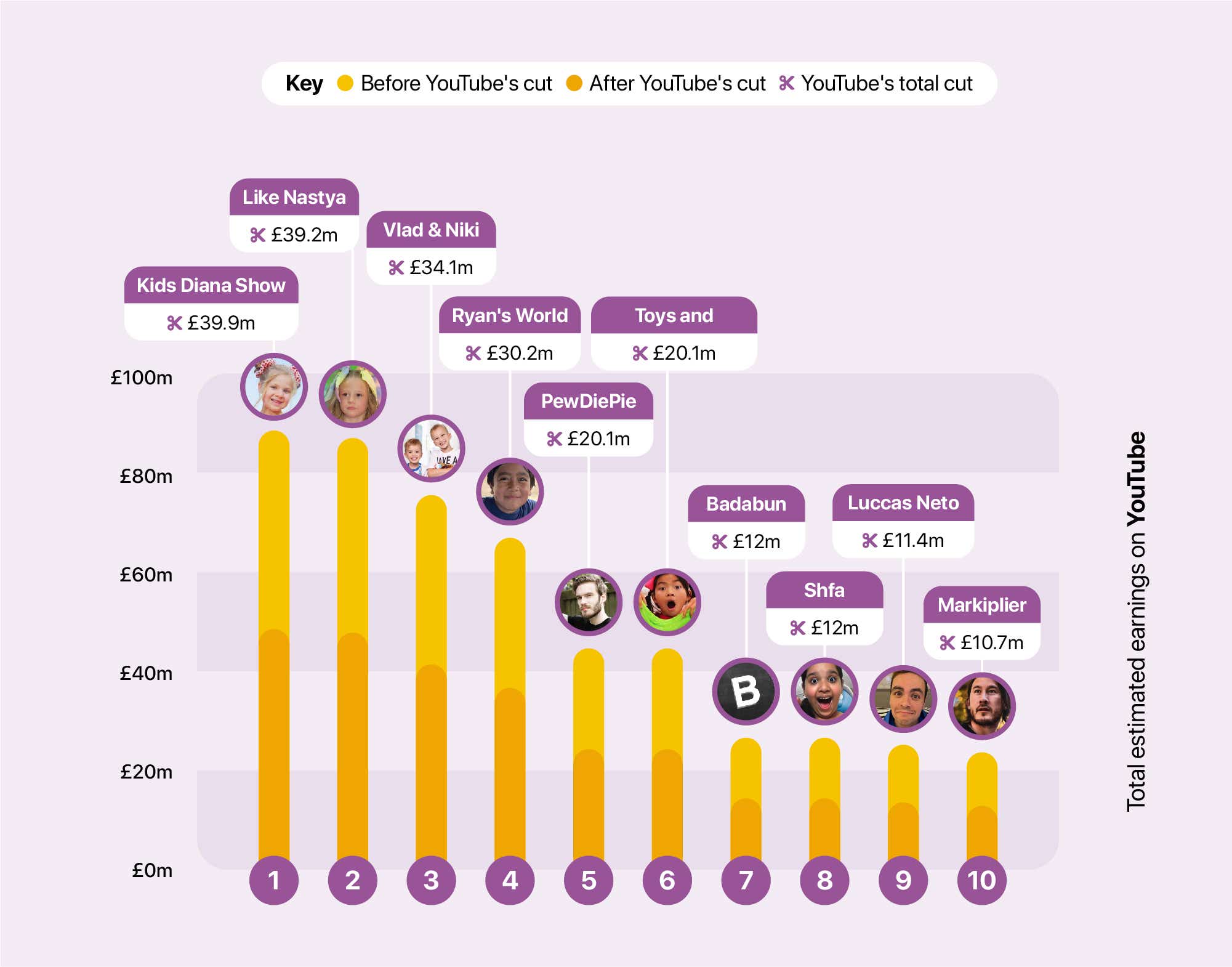 So, how much could YouTube have made from its top channels? Below are the top 10 most followed channels run by individuals, ranked on their estimated earnings (which take into account not just followers, but also engagement and views), as well as the potential cut that YouTube receives from them.

These figures become even more eye-watering for the highest-earning channels in the top 10 most-followed, with brother and sister Vlad and Niki potentially losing £88.2K ($122K) per video and fellow kids’ channel Kids Diana Show potentially losing £39.9 million ($55.3 million) in total.

Looking at the top 10 most popular YouTube channels, the amount of money that is being earned for YouTube as a platform is staggering. Over the course of the year, these successful YouTube stars could be funnelling as much as £229.7 million ($318.6 million) into YouTube’s pocket.

Twitch is another lucrative platform for creators, but takes an even bigger cut than YouTube, with creators only taking home 50% of their earnings from subscribers. 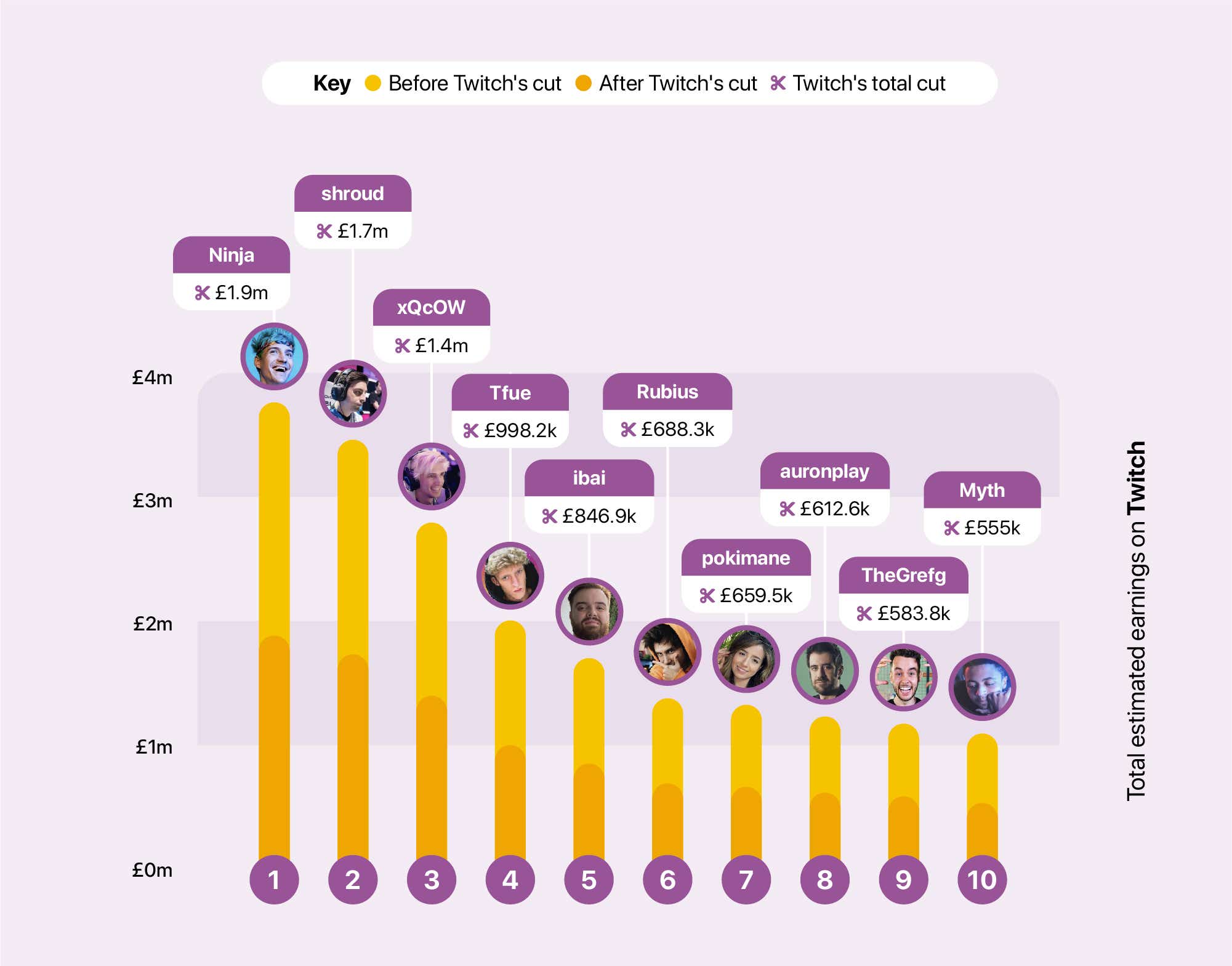 Ninja is the best known and most-followed name on Twitch and is estimated to have earned £3.7 million ($5.2 million) on the platform, but after Twitch’s fee, this drops to £1.9 million ($2.6 million).

Looking at the 10 most popular streamers, Twitch could have taken a total commission of £9.9 million ($13.8 million), making the biggest creators an extremely valuable asset for the platform.

Money.co.uk looked at major platforms within each type of platform, with the majority of platform commission fees being taken from the terms and conditions of the platforms themselves, with reputable news sources being used when the fees are not made publicly available. Full list of sources available upon request.

In each instance, only the fees that the platform itself takes were looked at, not including any extra payment processing fees or taxes that may be payable by the creator.

Looking at how these fees would affect the biggest names on YouTube and Twitch, the top ten most followed accounts on each platform were studied, calculating their potential earnings using Influencer Marketing Hub’s YouTube Money Calculator and Twitch Money Calculators, which calculate earnings based on a number of factors including number of followers, engagement and video views, with all follower counts and earnings estimates correct as of September 9th 2021.