Love it or hate it, grinding for gold is an all too familiar experience for anyone who plays RPGs. But which video games give you the best and worst deal when it comes to selling off your loot?
Share this guide

Whether you’re looking to protect yourself or deal some damage, there’s no shortage of traders and merchants looking to separate you from your hard-earned gold.

If you’re buying a suit of armour or a business suit, compare credit cards with money.co.uk to get our best credit card deals and spread the cost of your purchases over time.

While you’ll likely be swimming in cash by the time you’ve finished the main questline, the best way to make money early on is usually to spend a few hours dungeon diving, filling your pockets with as much loot you can find and schlepping it back to the nearest town to sell your wares.

But which video game economies give you the best deal on your goods and which games vendors could put Gamestop to shame? 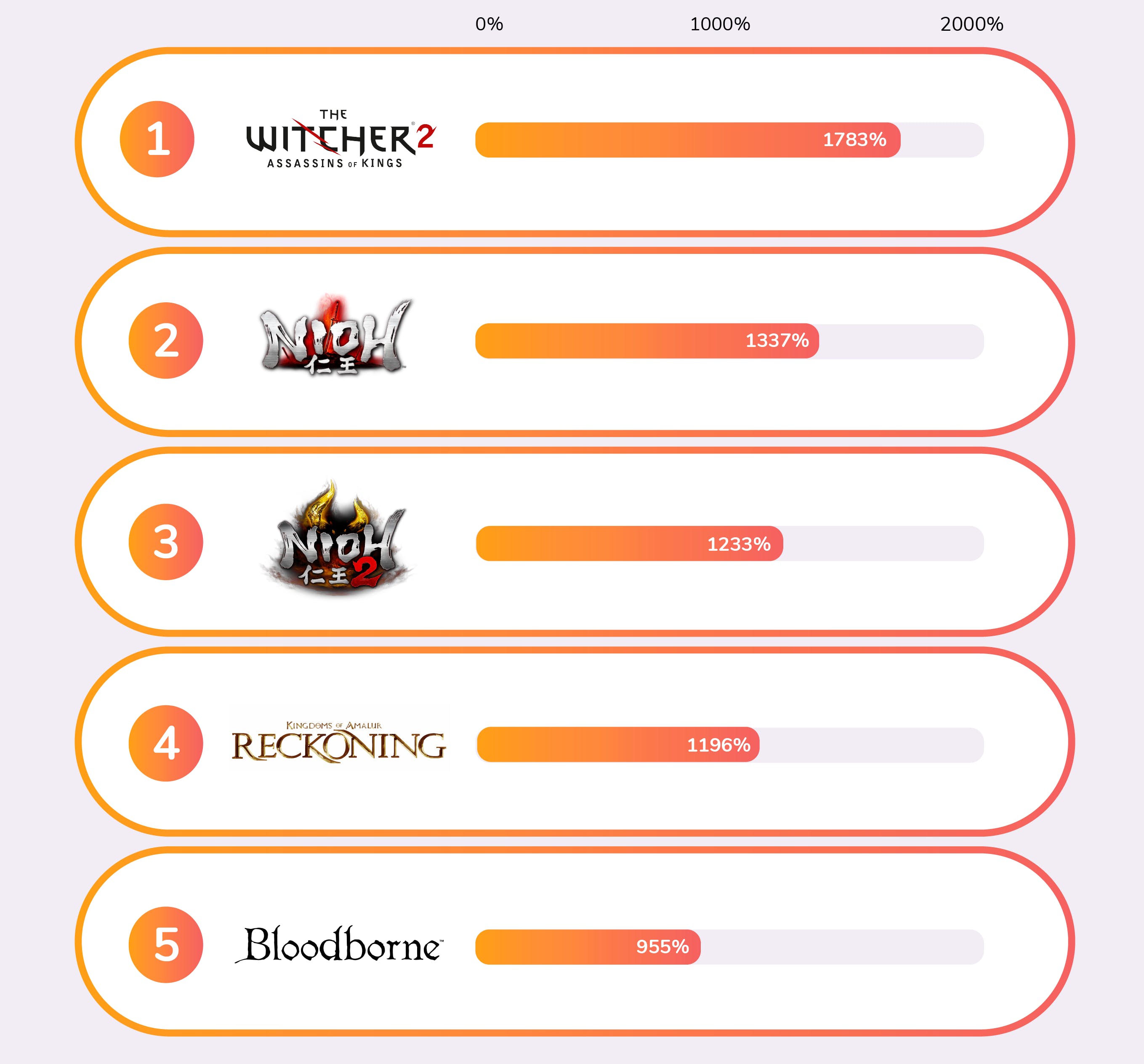 We looked at the difference between buy and sell prices for a basket of goods across popular RPGs to find the video game merchants that are making the most profit reselling your goods.

Our basket of goods contained a main weapon, armour (chest piece), ammunition/projectile weapon, a health item, and an item that can be used to craft or upgrade weapons and armour, or has some other functional utility e.g. item repair kits.

For games where players are unable to trade items from one of these categories, we used a second item from an alternative category.

By calculating the difference between the price merchants sold each item, and how much they would be willing to pay players for the exact same item, we found the video game merchants with the highest average markup across their goods, as well as the worst offender for each category.

We’ve highlighted the worst offenders below. 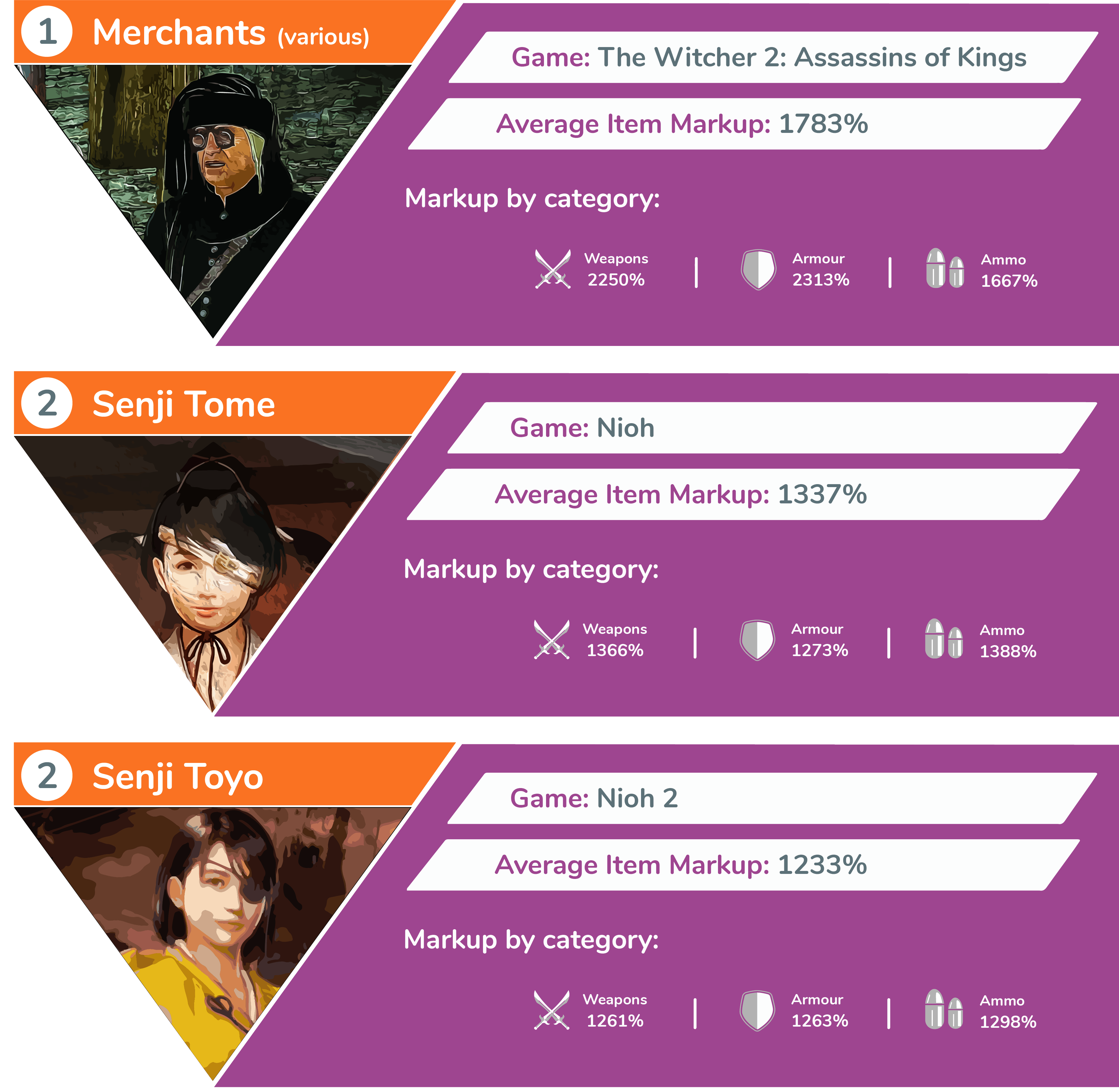 With an average markup of 1,783% on a basket of goods, The Witcher 2: Assassins of Kings takes the top spot on our list of gaming’s biggest ripoff economies.

While anyone who’s played the games or watched the Netflix show will know that being a Witcher can be a bit of a thankless job, offering Geralt a measly 16 orens for a Temerian sword that merchants will sell for 376 orens seems more than a little unfair.

Released in 2017, Nioh is set in a fictionalised version of 17th century Japan where players fight humans, monsters, and apparently a losing battle with a blacksmith who drives a particularly hard bargain.

With an average markup of 1,337% on a basket of goods, players who want to maximise their profits might want to consider disassembling higher-level items and selling off the individual components instead.

Both prequel and sequel to the first game, it also follows in its predecessors’ footsteps when it comes to its economy.

As the game's only merchant, it seems as though the blacksmith is taking full advantage of their monopoly on the market, charging customers up to 1,233% more than they’re willing to pay players for the exact same goods.

As players progress through the game, they’ll usually find unique and high-level weapons that will help them dispatch enemies in no time at all.

However, in the early game when quality items can be hard to come by, it’s tempting to invest what little cash you have into a weapon that does more damage to help you progress through the game that little bit faster.

But, with a markup of 2,250% on a typical steel sword, anyone currently playing or looking to start a new playthrough of The Witcher 2 might be better off sticking to looted weapons or hunting down crafting diagrams if they want to make the most of their cash.

While some players prefer to avoid taking damage altogether by mastering dodge, parry, and block mechanics, those who like to take a more direct approach will want to mitigate incoming damage by upgrading their armour instead.

With a markup of 1,362% on a piece of armour, PlayStation Plus subscribers who recently claimed Kingdoms of Amalur: Re-Reckoning from the list of free monthly games might want to think twice about their build - at least until they have some gold in the bank.

Whether it’s for stealth or crowd control, ranged weapons and projectiles can bring a different and often fun dimension to any playthrough. And while arrows or crossbow bolts are usually easy enough to come by, more exotic options usually need to be crafted or purchased from a trader.

Nioh 2 players who invest skill points in the right places will be able to replenish some of their projectiles at shrines, but those who don’t will have to pay a premium to resupply.

Metal ingots, weapon modules, and repair kits are all useful items that players can choose to make use of or not.

Which miscellaneous items you decide to use will often be dictated by your play style, so selling off the stuff you don’t use seems like a good money-spinner - but they could be making even more money for your local merchant.

Nioh’s blacksmith sells some of these items for as much as 1,377% more than they’re willing to pay you for the exact same thing, which is a bit of a slap in the face considering what you went through to find it in the first place.

No matter what armour you have equipped or how quick your reflexes are, avoiding damage all together is pretty hard to pull off, so stocking up on health items before heading out is always a good idea.

Known for their particularly challenging playstyle, it’s no surprise that a game from the SoulsBorne series punished players the most for the privilege of healing.

Average Item Markup = the percentage difference between the price a merchant is willing to pay the player for a selection of items (basket of goods) and the price at which vendors sell those items.