We’ve collated the latest diversity in business statistics on UK businesses for 2022 including; women in business, ethnic minorities and more. Here's what we found.
Share this guide 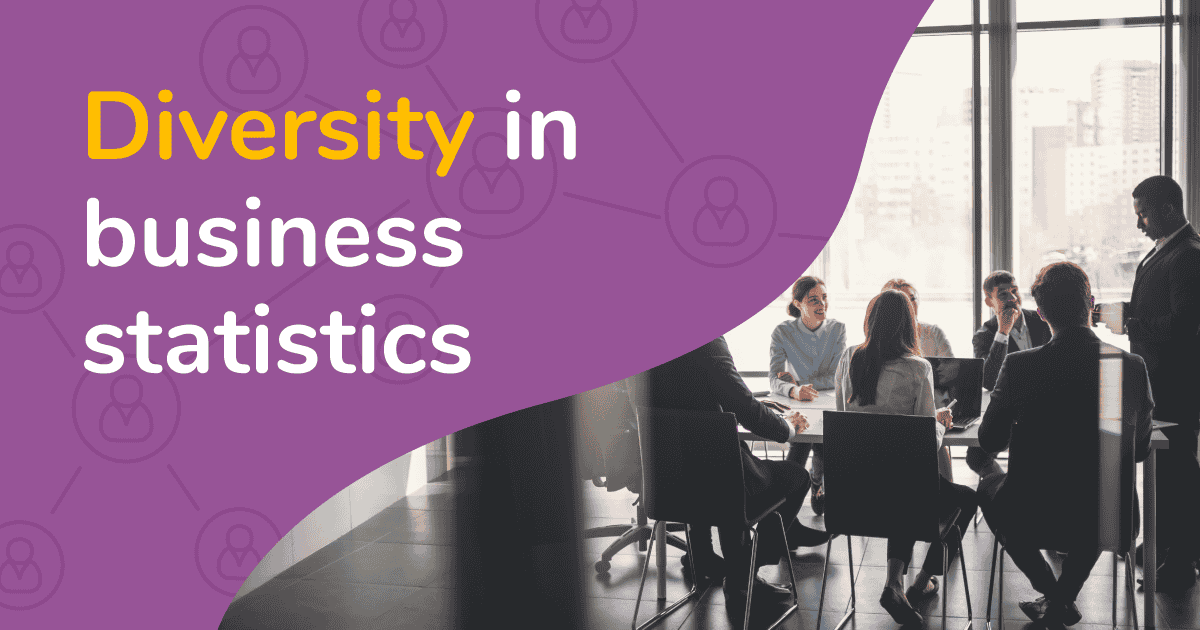 Today, more than ever, employers are choosing to prioritise diversity, equity, and inclusion (DEI) initiatives in the workplace. But just how diverse is the business landscape, and how has it changed over the last decade? We got investigating to bring you the latest business diversity statistics for 2022.

On this page, we’ll cover:

In recent years the number of women entrepreneurs has been on the rise – particularly since 2000.

How many women have considered starting a business?

According to a survey from Tide, one in five (18%) women considered starting a business in 2021. The same question was asked to men, and over a quarter (29%) said yes - meaning for every two women who’d thought about it, three men had.

If you are thinking of starting a business, visit our hub for lots of guides, tips and information.

When you are ready you can then compare business bank accounts, business credit cards, business loans, business savings accounts and business insurance to get the best deals.

Have you ever considered starting your own business? 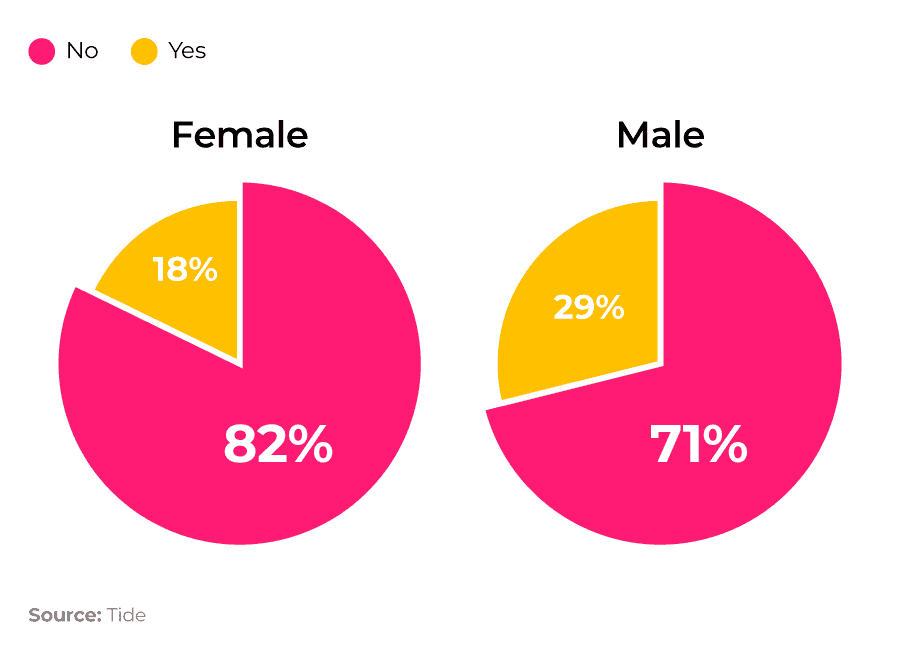 Of the women surveyed, one in five (20%) who said they had thought about running a business had taken the step to start their own business. Of those who had thought about starting their own business but hadn’t yet taken the plunge, the most common reason was concerns about savings or financial worries, while the second most common reason for women not starting a business was the risk involved.

What would prevent you from starting your own business? 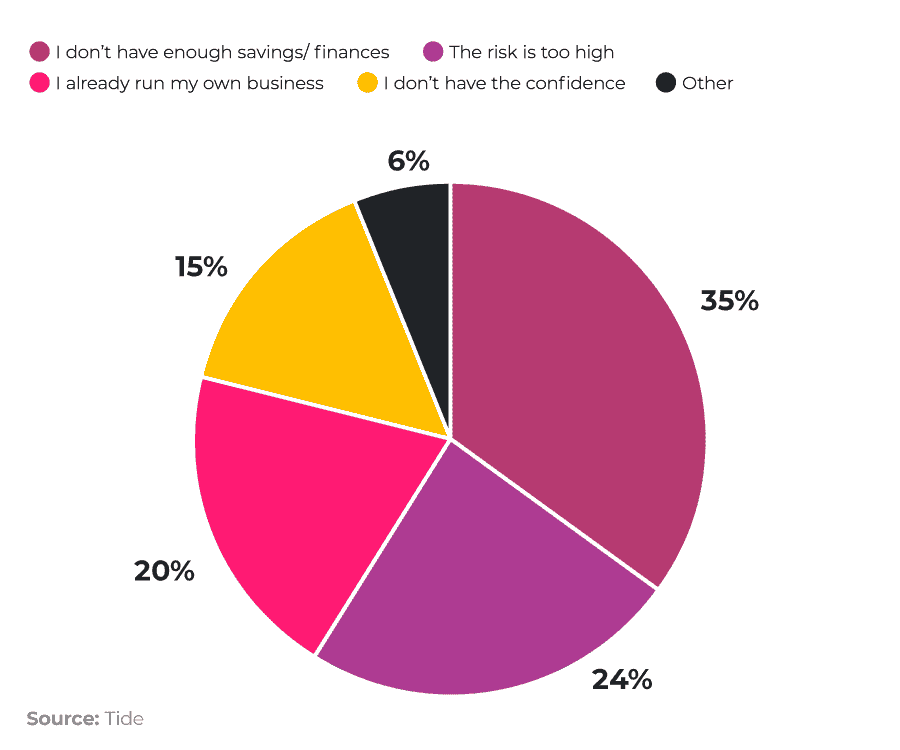 How has the number of women in business changed over time?

Despite the gap slowly closing, there are still twice as many men working for themselves as women. 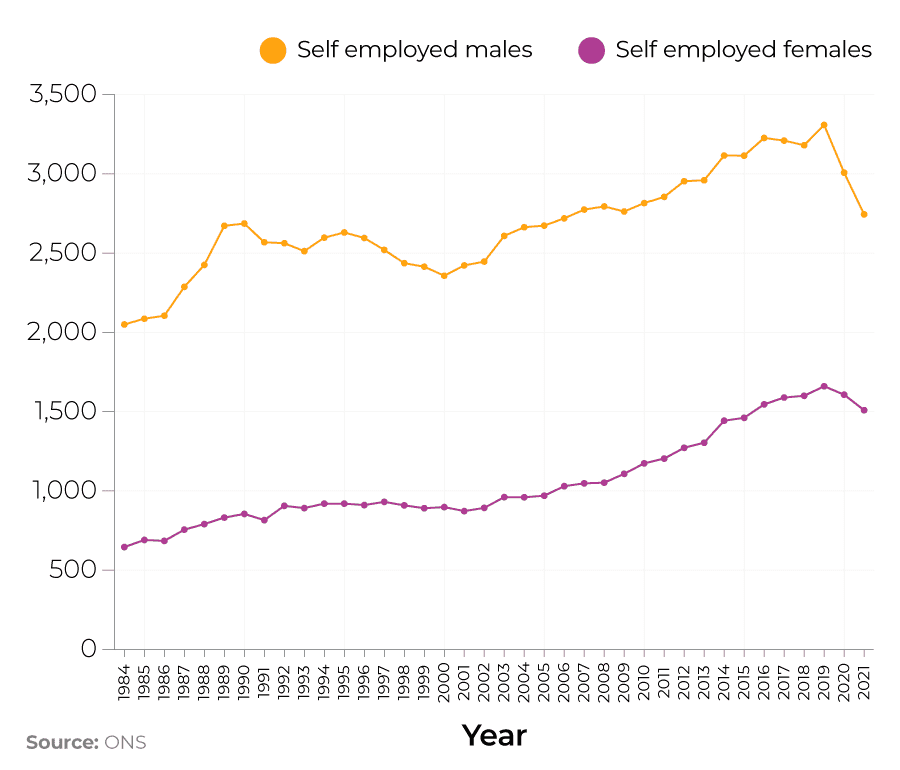 How many SMEs are led by women?

In 2020, 16% of SME employers were led by women, up from 15% in 2019. This means the business was either led by one woman or by a management team with more females than males. Further to this, a quarter (24%) were “equally led”, meaning they had an equal number of men and women in their management teams.

However, not all businesswomen dream of running a large team, as some prefer to go it alone. In 2020, 21% of SMEs with no employees were led by women – 4% higher than a year earlier in 2019 and 5% higher than the percentage of women-led SMEs with employees.

Inevitably, women in business statistics vary depending on the sector. In 2020, just 6% of SME employers were led by women in the construction sector, compared to 37% in the health sector, 36% in the education sector, and 25% in the accommodation and food services.

Similarly, the number of women in most senior board roles continued to increase on the FTSE 250 in 2021, with 32 women Chairs and 83 women occupying the Senior Independent Director role.

However, the number of women CEOs remains flat on both lists. In fact, in the FTSE 250, 14 companies had more women than men on their boards in 2021, a further 20 had 50%, and 92 had 40% or more. Despite this, there were still six companies on the FTSE 250 with one lone woman around the table.

The number of companies in the FTSE 250 with four or more women around the board table also continued to grow in 2021. So much so, that it is now considered the “norm” to have three or more women on the board. 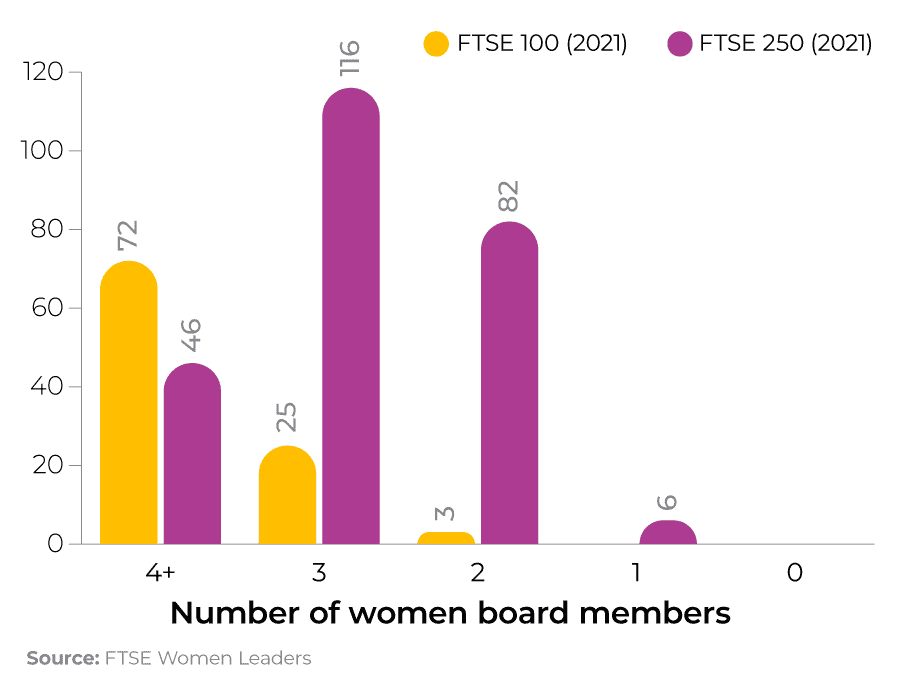 What is the economic contribution of female-led businesses?

Women-led SMEs contribute around £85 billion to the annual economic output in the UK, which is 16% of the Gross Value Added by SMEs.

More women than ever are starting new companies

Despite seeing very little progress over the past three years, the proportionate growth of female-led companies started overtaking male-led organisations in 2021. However, new companies remain almost three times as likely to be started by men than women.

Which areas in the UK have the most female founders?

Women comprise the greatest proportion of the self-employed population in Edinburgh and South East Scotland, with 39% of self-employed people being women, followed by South East England with 37%. However, these areas are still some way off from achieving gender equality when it comes to women starting their own businesses.

At the other end of the table, Northern Ireland and the West Midlands have the lowest rate of female self-employment, at 26% and 27% of self-employed women, respectively.

Female entrepreneur hotspots in the UK

Which industries have the most female founders in the UK?

When looking at male and female self-employed businesses, there are clear differences between which industries are most popular with each gender.

Just under three-quarters (74%) of those who are self-employed in health and social work were female in 2020. This was followed by industries such as ‘households as employers’, which includes jobs like cleaners, babysitters and secretaries (69%), and other service activities, such as hairdressers and beauticians (67%).

On the other hand, construction, transport and storage, and mining and quarry were industries dominated by men, with fewer than 10% of self-employed businesses in these sectors run by women.

The UK’s industries with the most female-founders 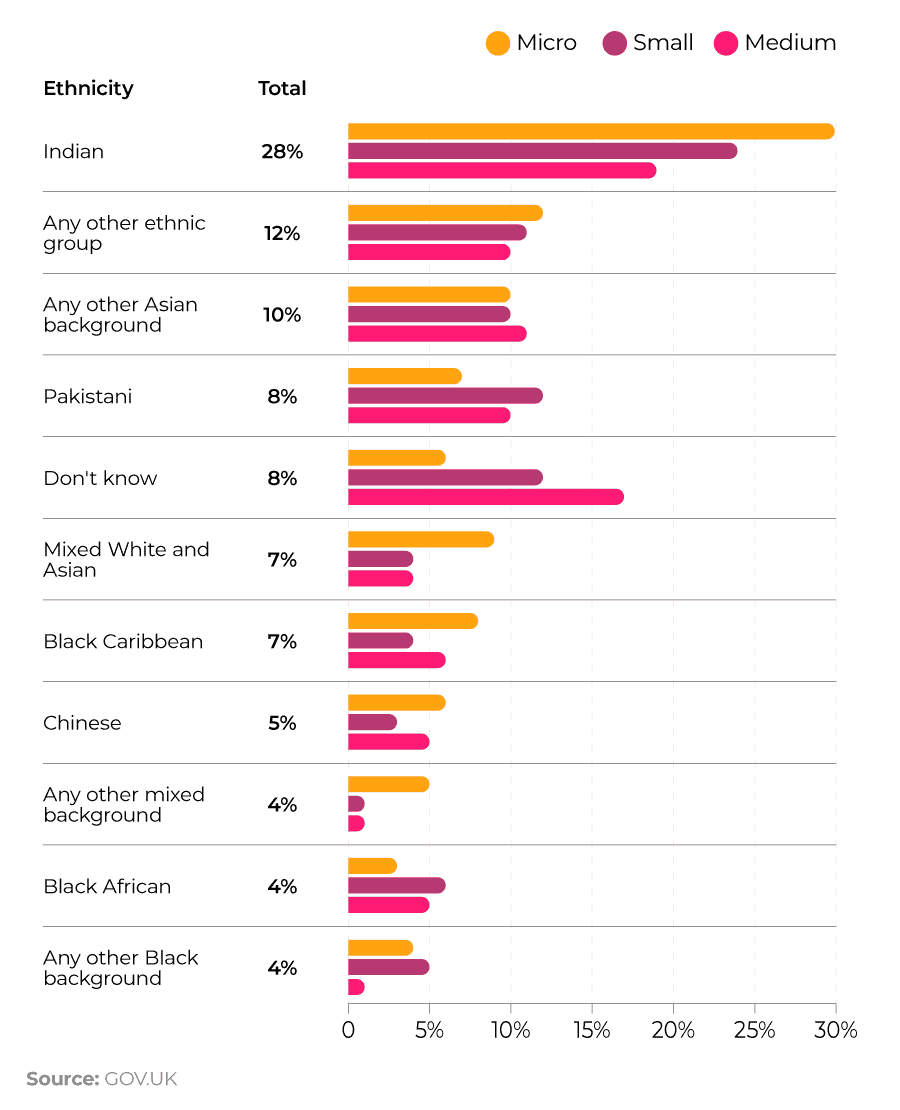 Minority ethnic group-led businesses are most likely to be in the information and communication sector (9%), as well as the accommodation and food sector (7%). On the other hand, they are less likely to have business in the primary (0%) or education (1%) sectors.

Similarly to minority ethnic group-led business employers, companies with no employees also made up 6% of SMEs in 2020. Of these businesses, business owners are most likely to identify as “any other ethnic group”, taking up a quarter of all SMEs. 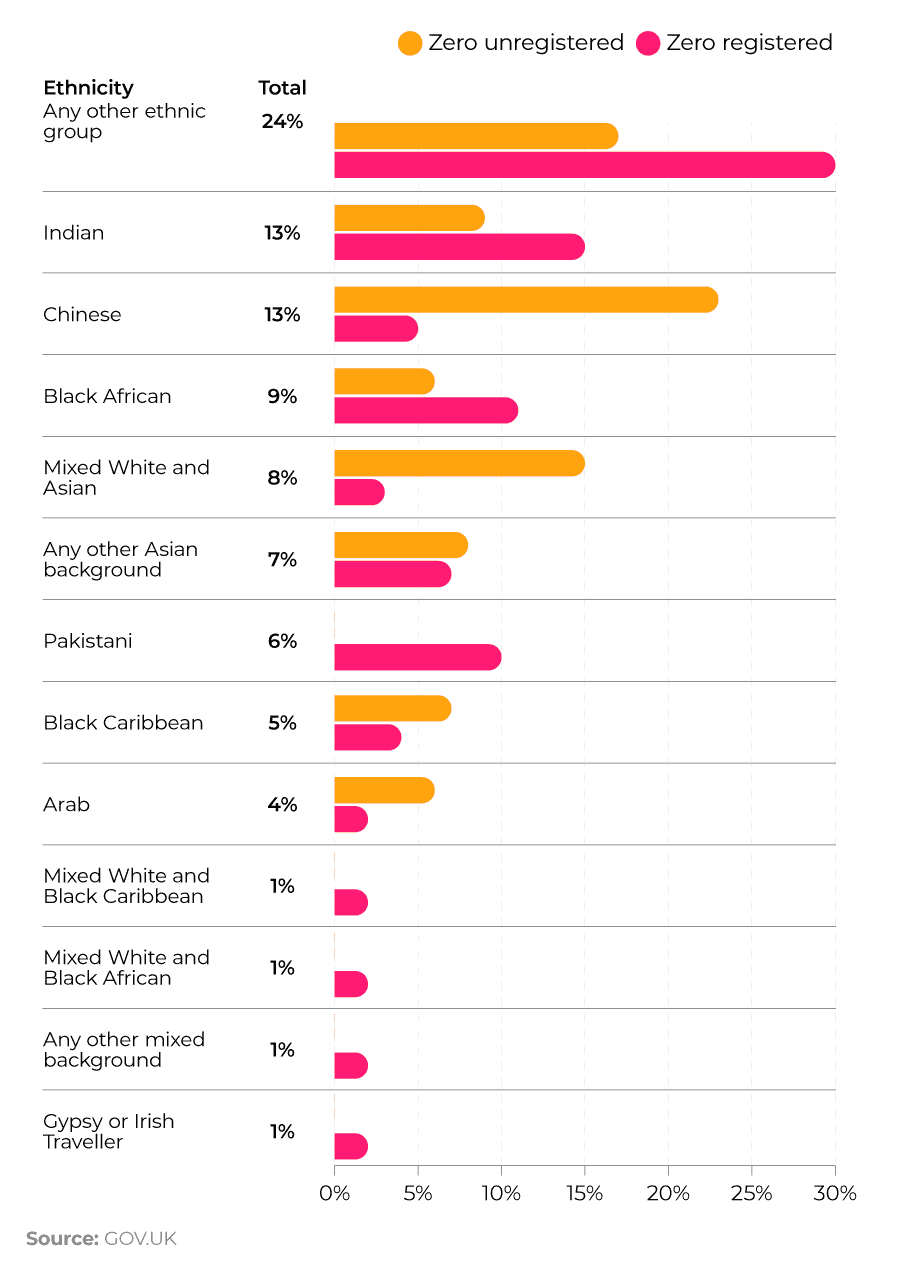 Where are minority ethnic group-led SMEs most common in the UK?

In 2020, ethnic minority businesses were most common in England, with 6% of SMEs being based there, compared to 2% in Scotland, Wales, and Northern Ireland.

Regionally, ethnic minority businesses are most common in London (16%) in 2020. This is likely due to London being home to a large proportion of the UK’s ethnic minority population. In fact, almost half (46%) of Black entrepreneurs and 33% of Asian and Other Ethnic Minority entrepreneurs were found to be in Greater London, compared to 11% of White entrepreneurs.

Comparatively, ethnic minority businesses are least likely to be in the North East and South West, both taking up 1% of businesses.

Ethnic diversity in the FTSE 100

These numbers demonstrate that the ethnic diversity in the FTSE 100 director positions is increasing, but there is still some way to go until equality is reached. 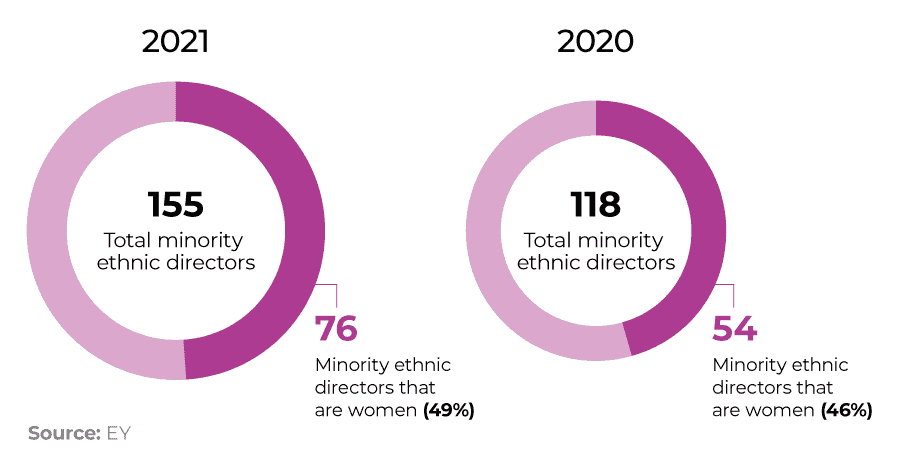 Ethnic diversity in the FTSE 250

Of all Board positions held by minority ethnic directors, across the FTSE 250 73 (44%) were held by women. 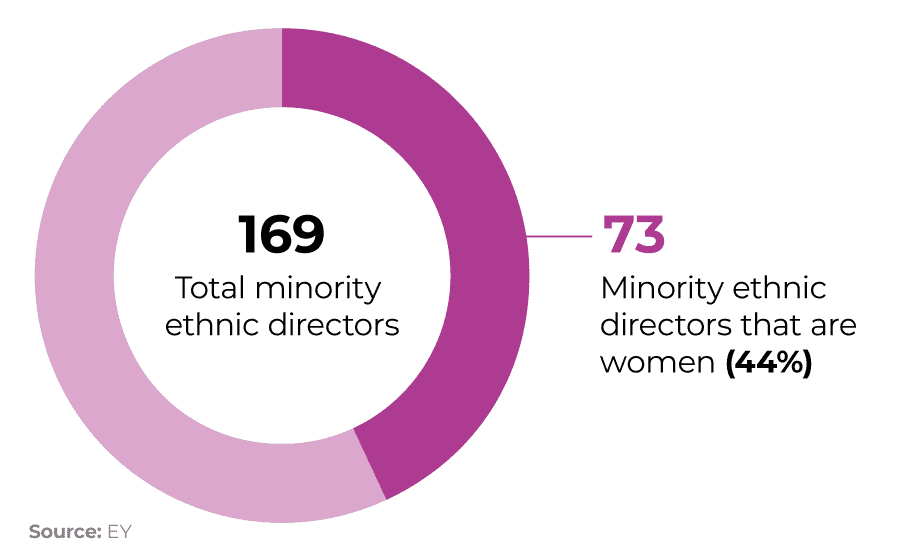 Ethnic minorities in the UK are more entrepreneurial

The highest entrepreneurial activity rate – which measures involvement in setting up a new venture or running a young one under 42 months – was in the South East, East of England, and London.

This is backed up by statistics of closed businesses of ethnic minority groups, where one in five Black ex-business owners closed their business due to difficulties getting finance. This figure was around one in 20 for Asian and Other Ethnic Minority and White ex-business owners. Research has shown that Black-run businesses are more than four times more likely to be denied a business loan outright than White-run businesses; however, this is said to be primarily due to businesses’ credit characteristics and not discrimination.

The feeling of discrimination among ethnic minority business owners is also emphasised in a 2021 study of aspiring and established Black entrepreneurs, where more than half (53%) of respondents reported experiencing racism or discrimination, and 84% perceived racism as a potential barrier to their entrepreneurial efforts.

Visit our business hub to find all our best deals on business finance products and guides.

Whether you want to start a business or you're already running one, our business finance team have written a whole range of guides to help with managing your business' money. 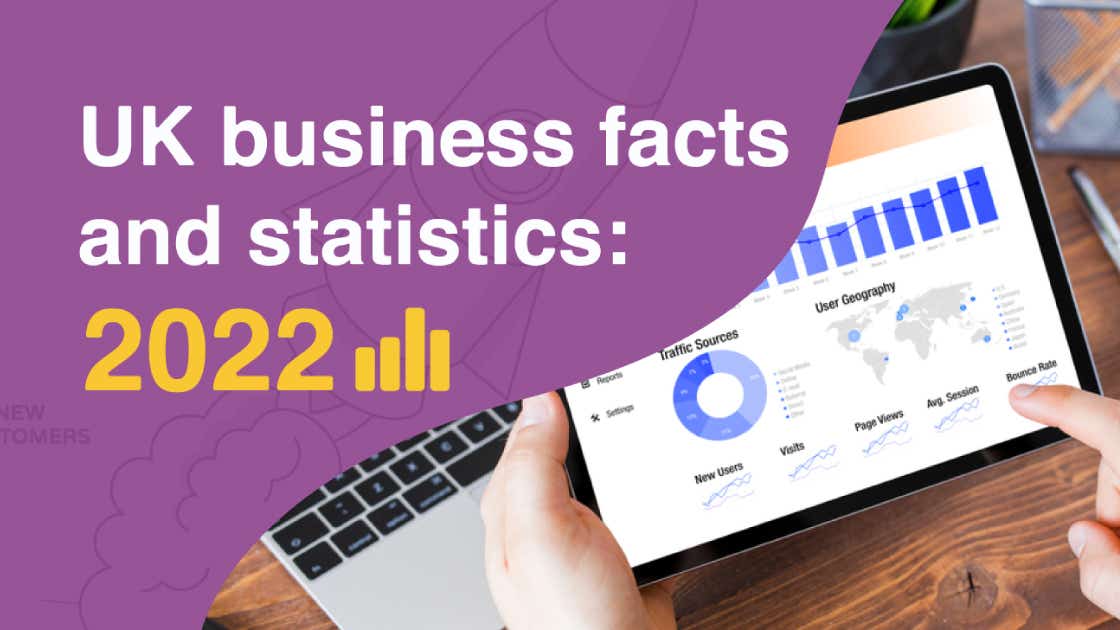 What does it mean to be a small business in the UK in 2022? We’ve taken a deep dive into business statistics to find out everything from how much small businesses make and who owns them to what they’re borrowing and where the UK’s entrepreneur hotspots are. 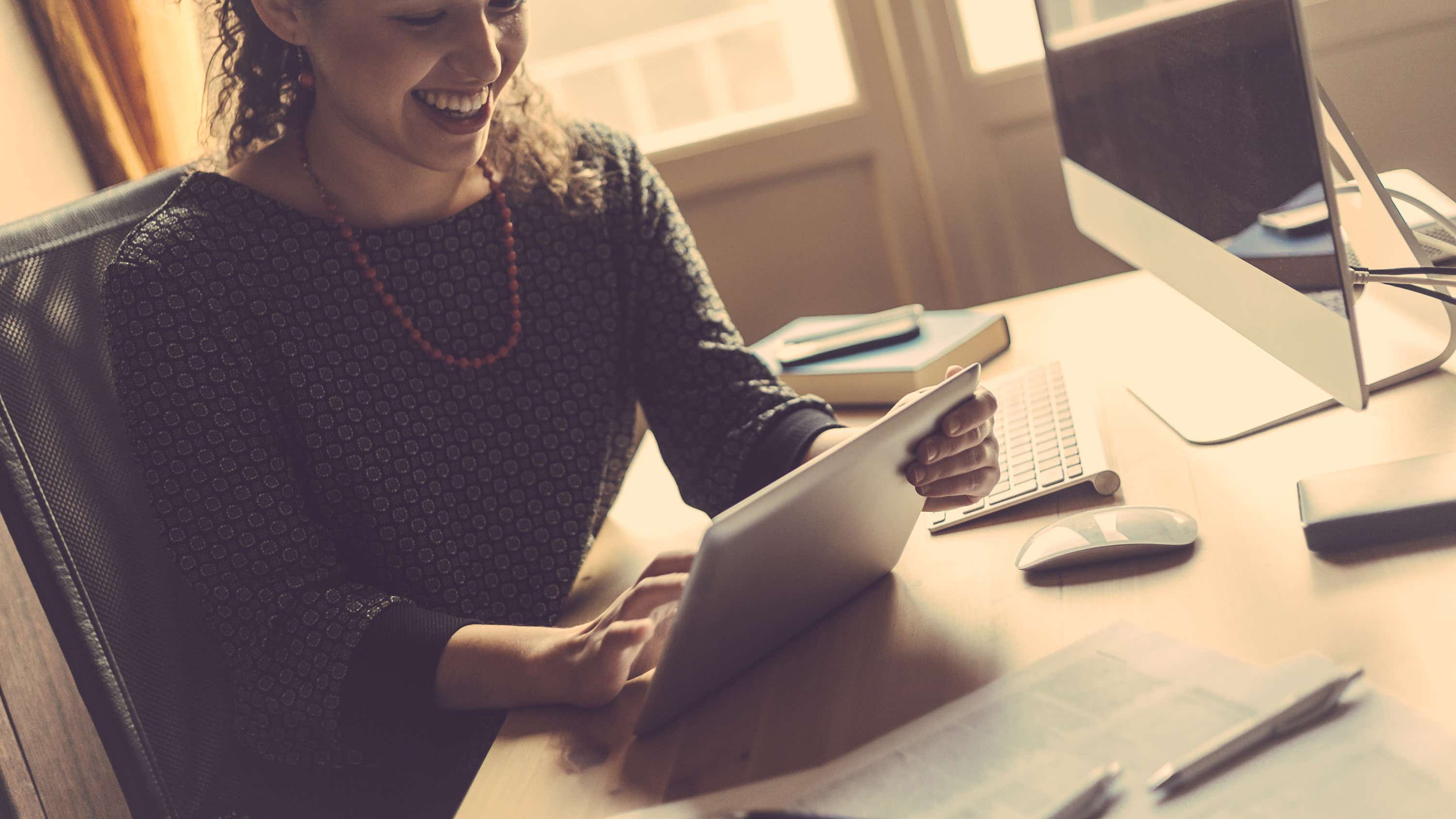 How to turn business ideas into a profitable company

What's involved in turning a business idea into a going concern - and should you bother in the first place Here we explain how to tell if you idea for a business is actually a good one in reality, and what the next steps to making it happen.

How to tell if a business idea is any good 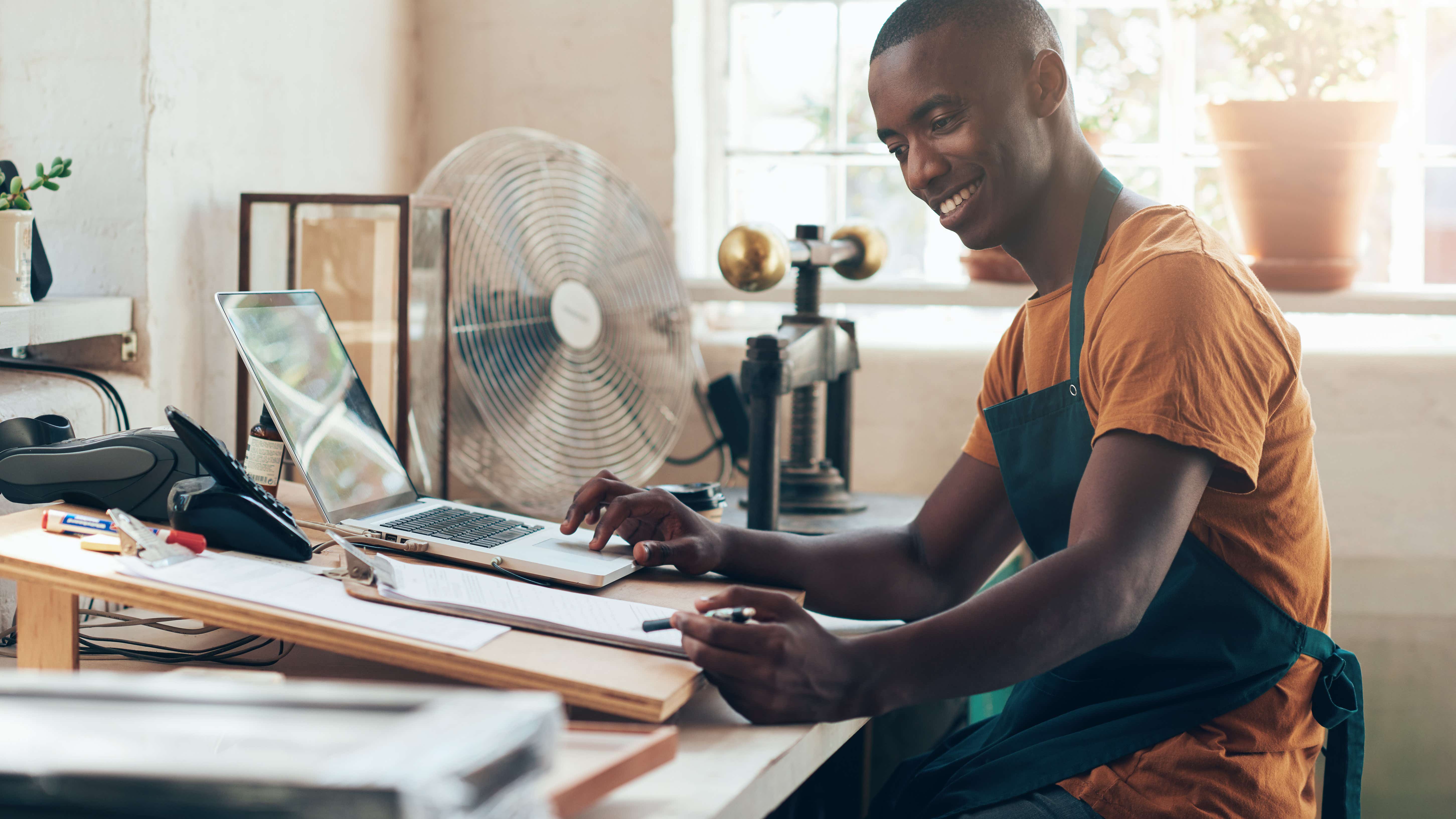 How to write a business plan 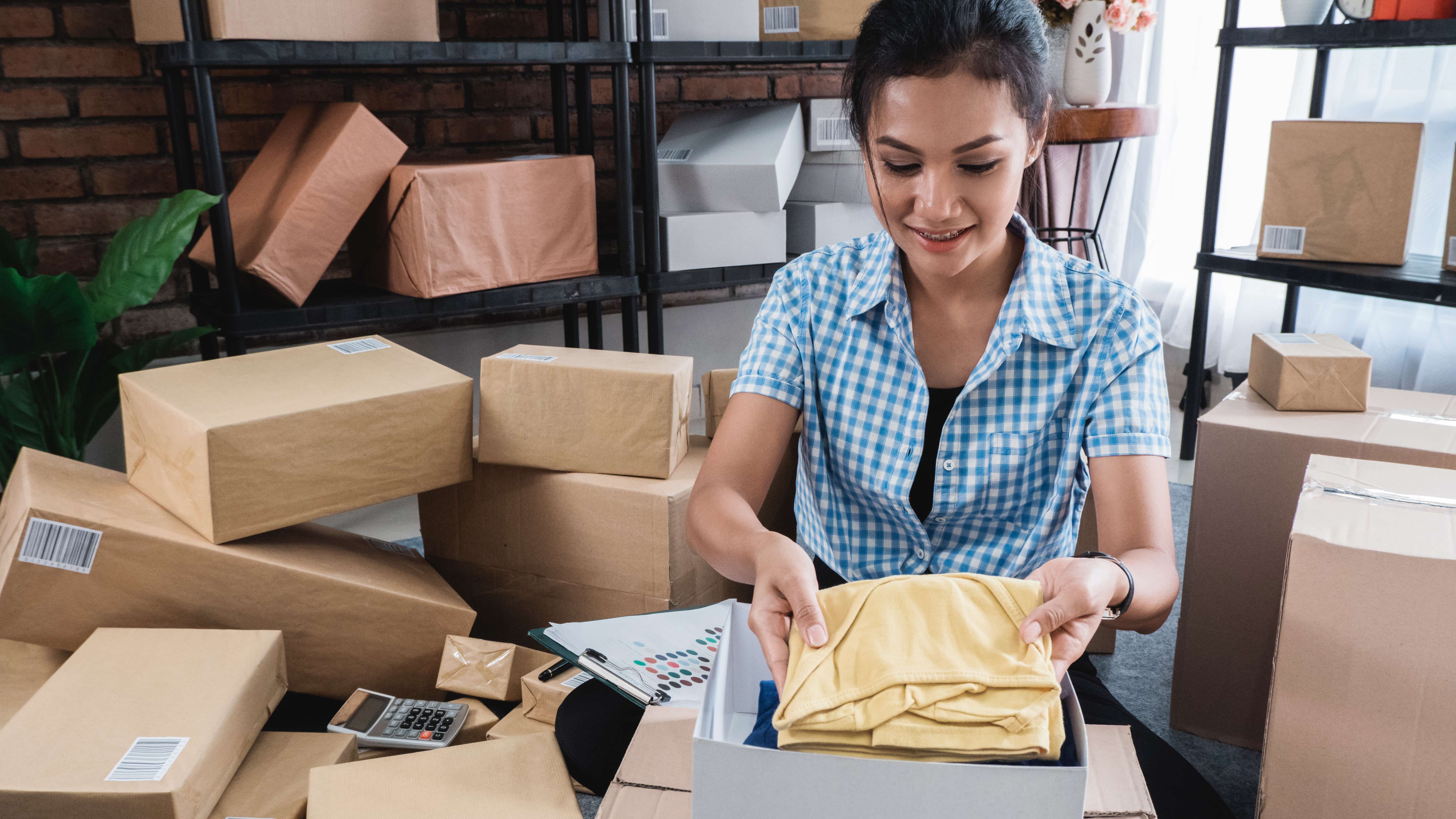 Can you start a business from home?

Everyone’s heard the stories of billionaires starting their businesses from a bedroom at home, but setting up a start up takes careful planning and there are hidden costs. This is what you need to know to get it right

What you need to check for 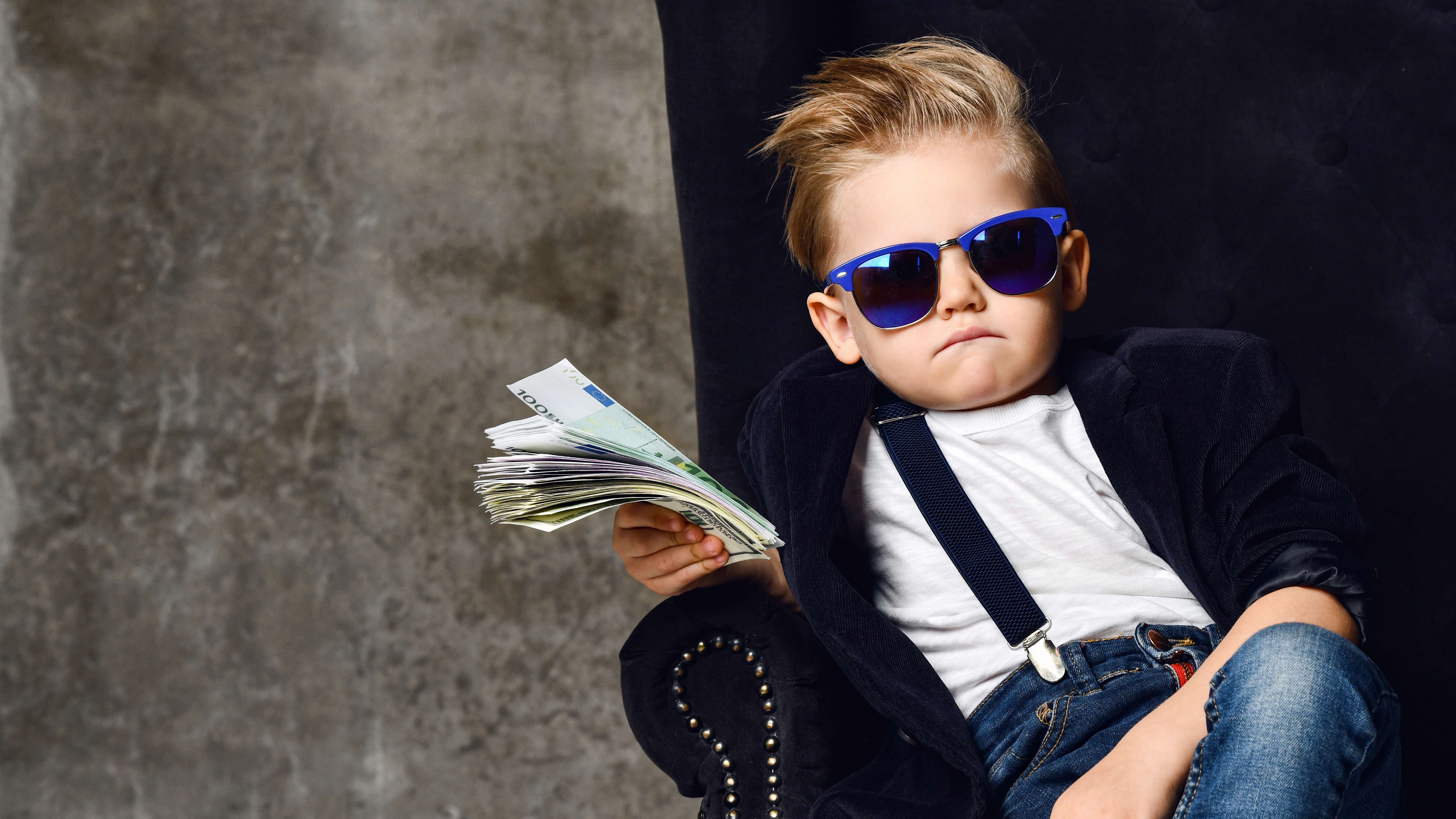 How to fund your business idea

If there’s one thing budding entrepreneurs have in abundance it’s ideas. But great concepts often amount to nothing without the financial oomph to make them real. Here we explore how to get the money needed to earn your fortune.

Where yo look for the money you need 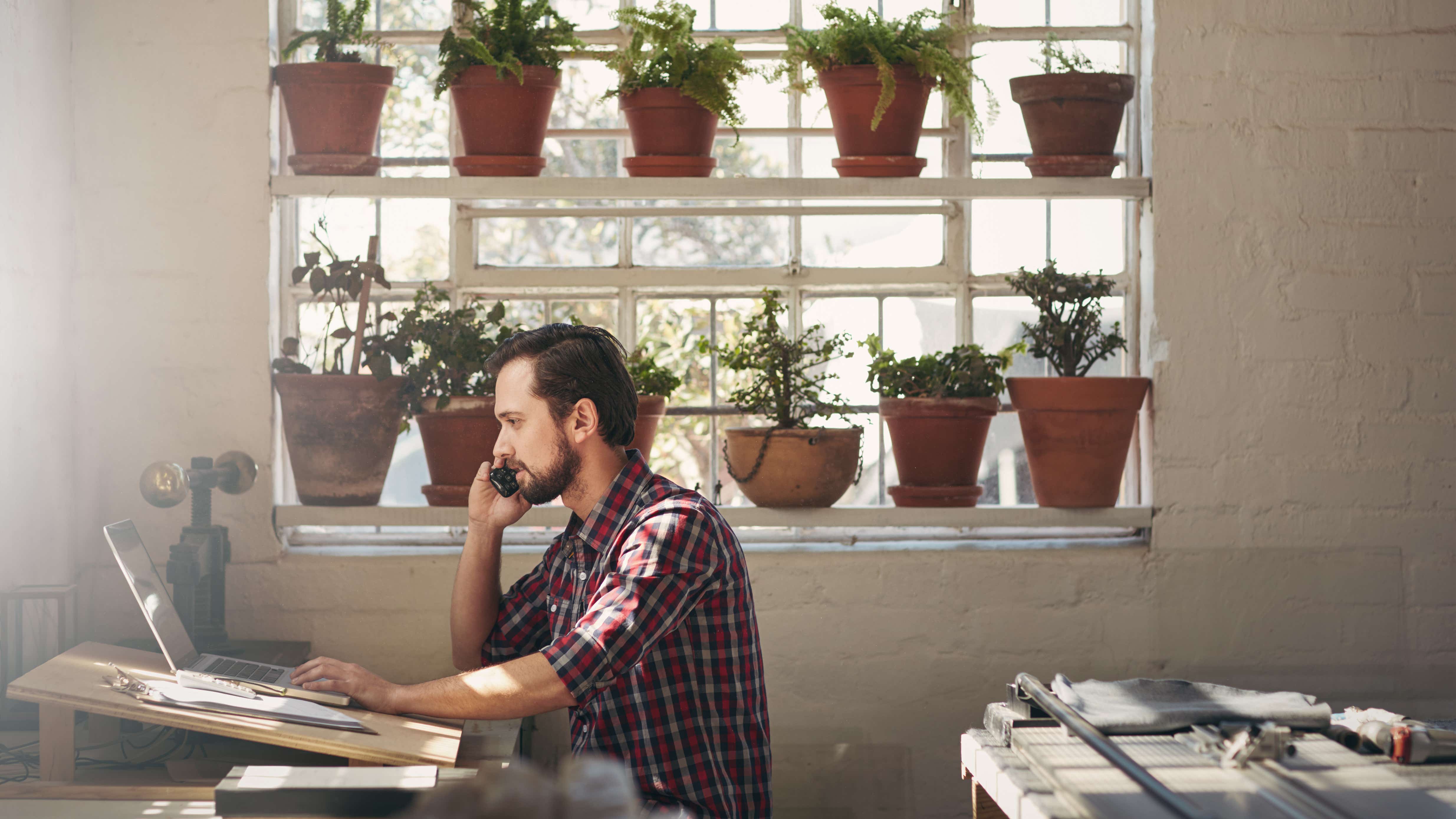 How to register a business?

Here’s everything you need to know to make sure your side hustle is legitimate including the difference between being a sole trader and a limited partnership, which might be right for you, and the deadlines and paperwork you need to consider

What you need to get ready now