The UK was already a nation of dog lovers, but more of us than ever before have welcomed pets into our families over the last year, as we look for a four-legged work from home companion.
Share this guide 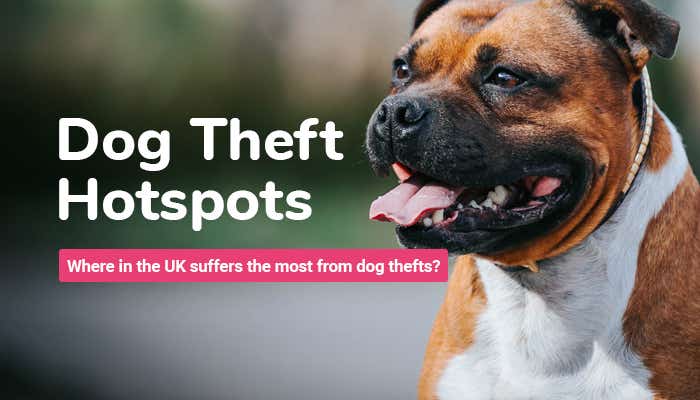 Unfortunately though, this has also coincided with a rise in the number of dog thefts, making it more important than ever that you’re fully protected with pet insurance. But which area in the UK is this the most concerning? And which breeds are most at risk?

To find out, we requested information from police forces up and down the country on the number of dog thefts people have reported in the last five years, as well as which types of dog were most commonly stolen.

Note: A small number of forces were unable to break down their thefts by breed, so the number of thefts listed by city will not match the number listed by breed.

The capital is the dog theft hotspot 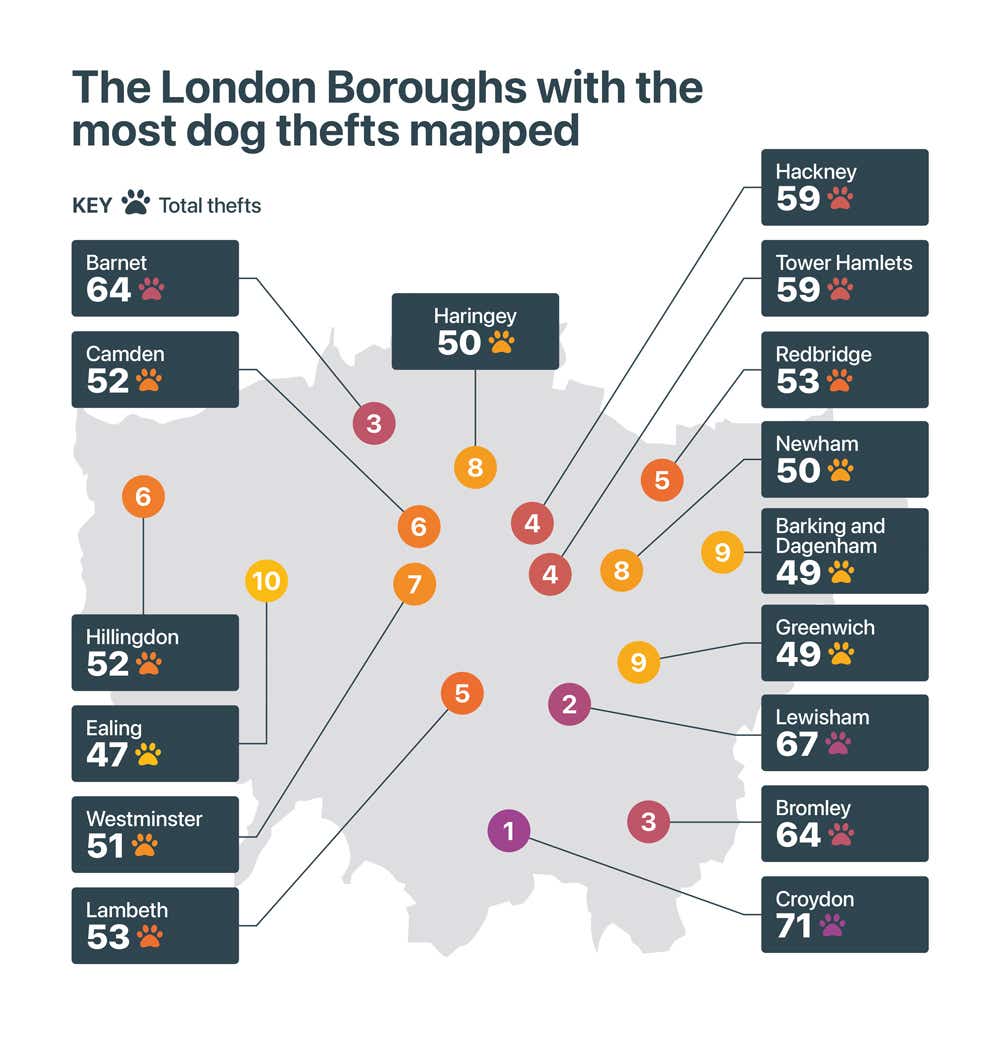 In the last five years there were a total of 1,409 dog thefts in London, with Croydon's police reporting the most with a total of 71. Interestingly, the neighbouring borough of Sutton had the lowest number of thefts, with just 16 over the same period.

Behind Croydon was Lewisham in sehttps://www.theportugalnews.com/news/2022-02-11/portugal-and-the-art-of-living-and-ageing-gracefully/65223cond (67), and Barnet and Bromley in joint-third (both 64). 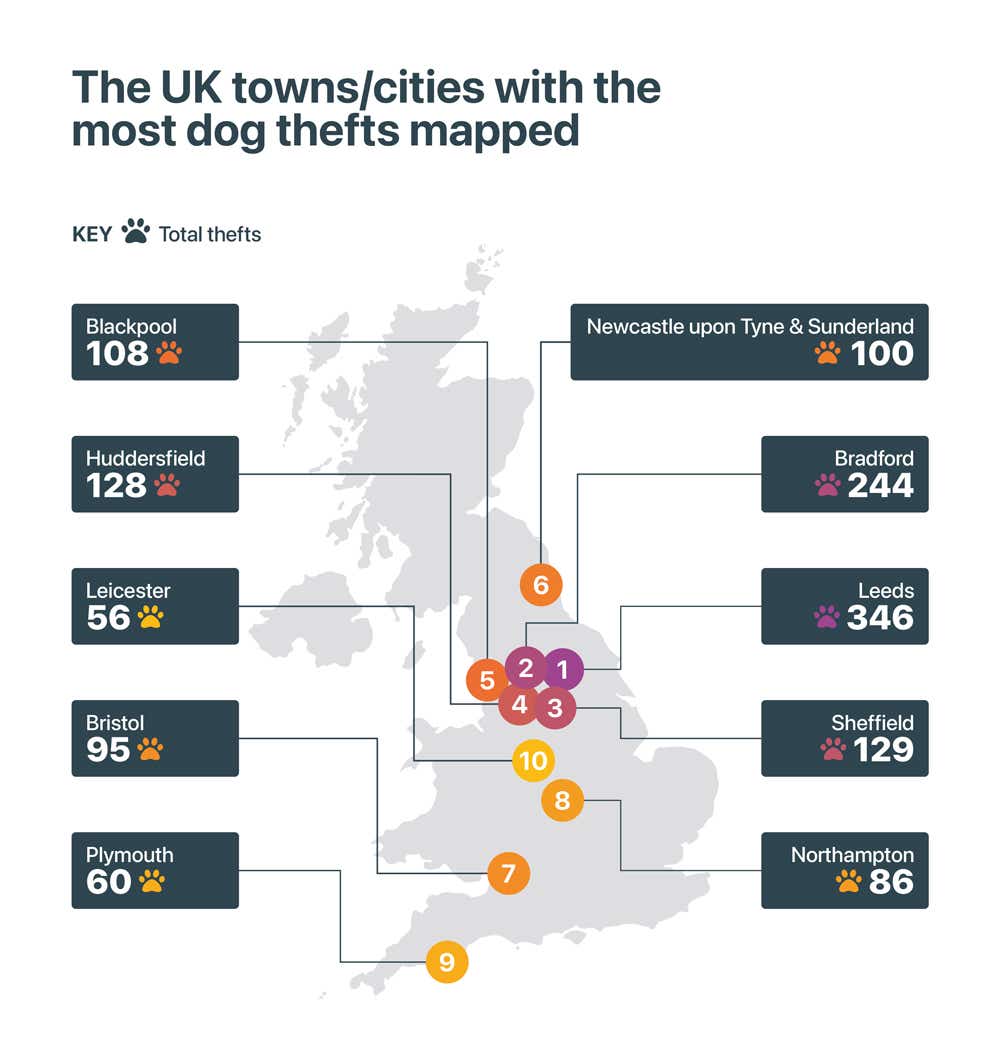 Outside of London, there were a total of 3,287 reported dog thefts in the last five years in the areas which responded to our request.

Each of the top four towns and cities outside the capital were located in Yorkshire.

After London, Leeds was the nation’s second dog theft hotspot, with 346 thefts in the last five years, followed by neighbouring Bradford (244), Sheffield (129) and Huddersfield (128). 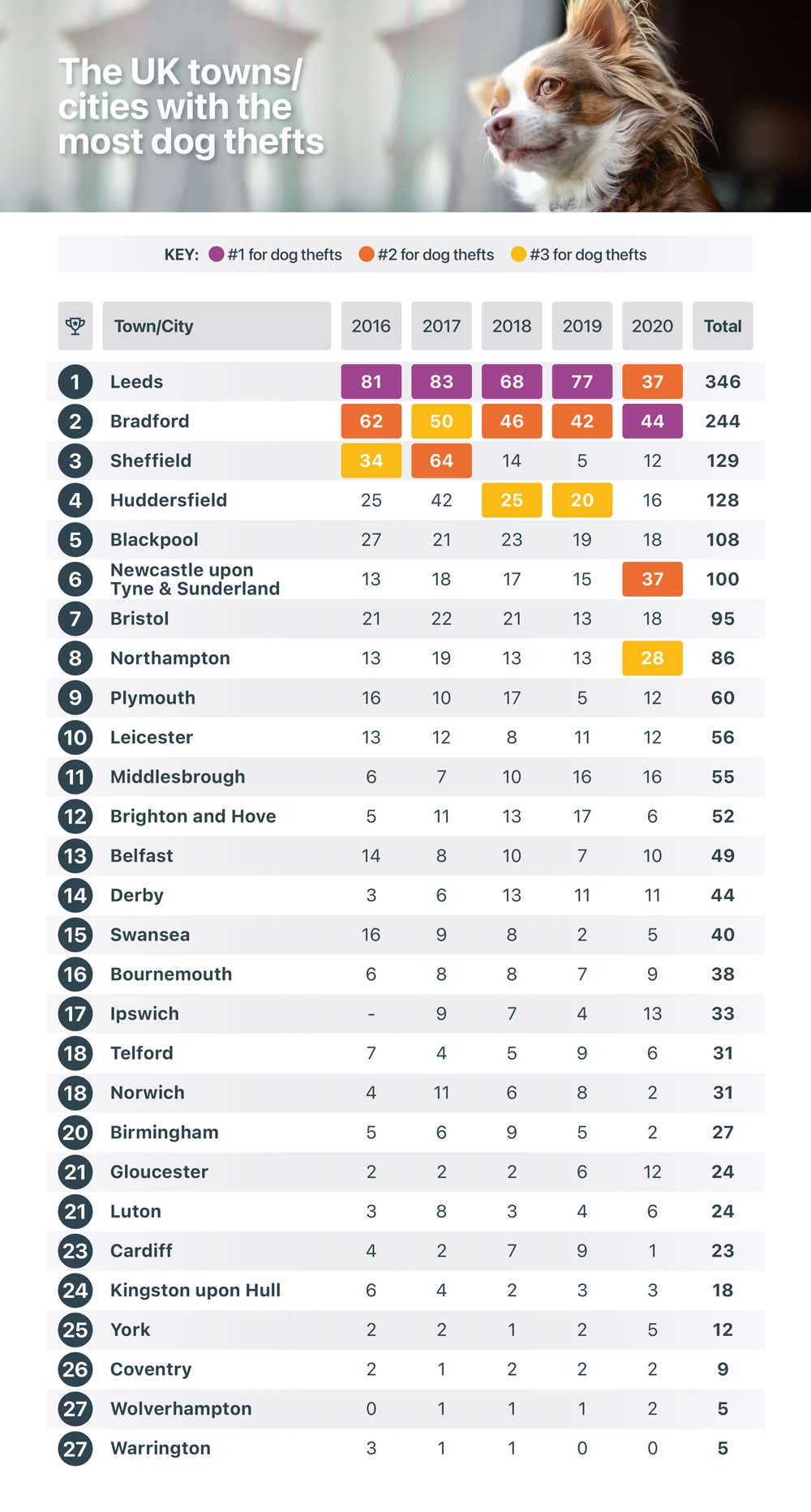 Staffies make up just under a fifth of dog thefts 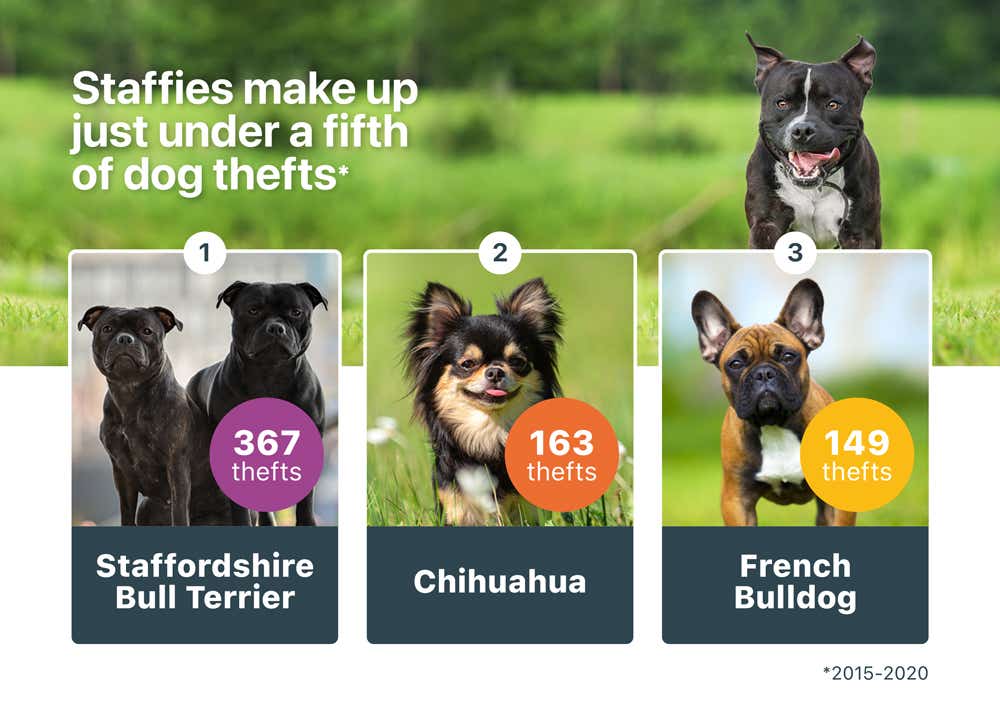 Staffordshire bull terriers are among the most popular dogs in the UK, so perhaps it’s little surprise that they’re one of the most commonly stolen dogs. However, when we also take into account the various crossbreeds too, Staffies actually account for 19.4% of dog thefts over the last five years.

Not only are Chihuahuas understandably a very desirable dog, but their tiny size, unfortunately, makes them an easy target for criminals too. This desirability also gives them a high resale price, with 163 being stolen in the last five years, although that’s still fewer than half as many Staffordshire Bull Terriers.

Another small breed of dog is the third most commonly stolen, the French Bulldog, with 149 thefts in the last five years. Frenchies have grown in popularity over the last five years, but unfortunately, this means that thefts have as well — growing by just over double from 20 in 2016 to 41 in 2020. Frenchies usually cost between £1,000-£2,000 but can be worth upwards of £3,000, up to £10,000, so it’s easy to see why thieves target them.

The dog thefts with the biggest increases 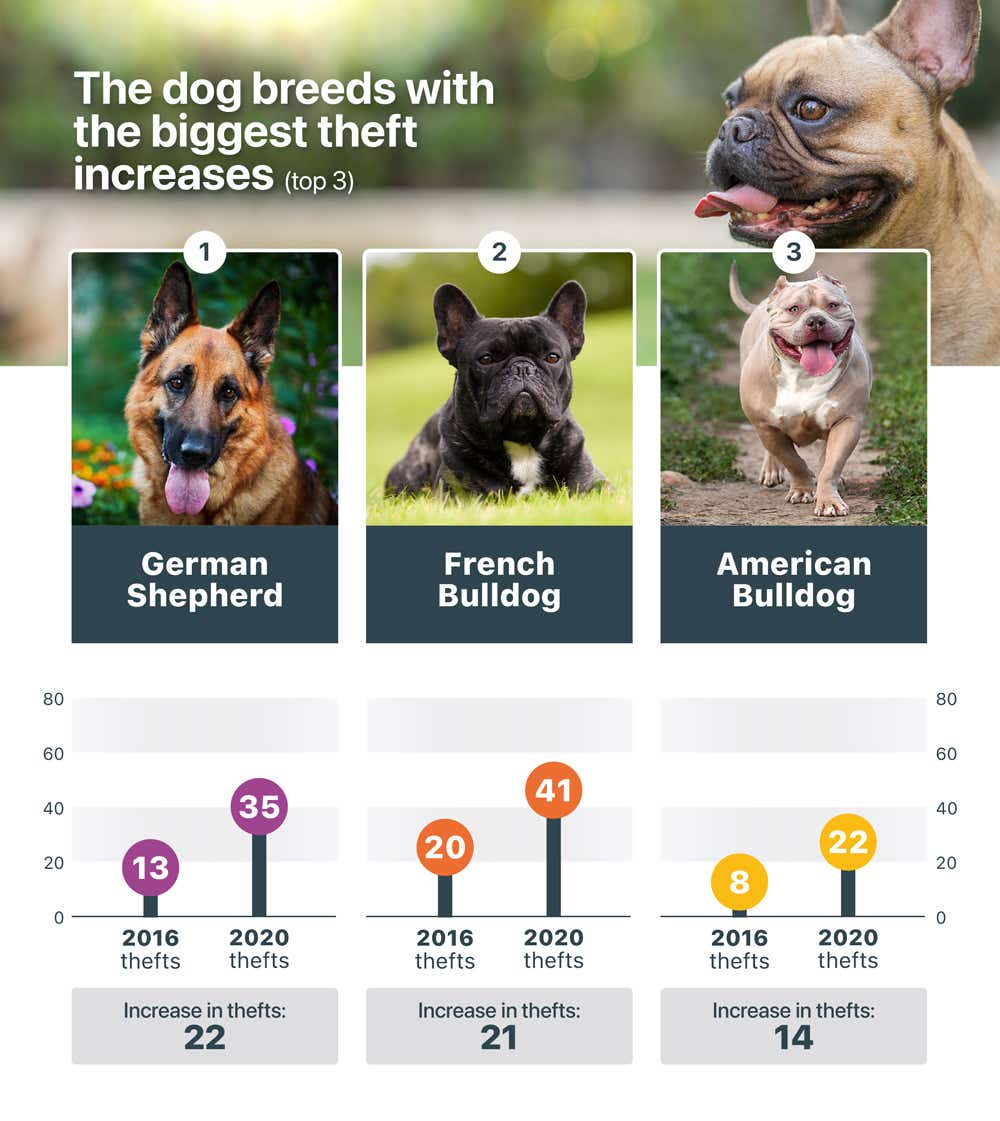 You’d think a German Shepherd would be a dog that you’d definitely want to avoid upsetting if you were a thief, but seemingly they’re being increasingly targeted. Due to their size and the fact that they’re often wary of strangers, thieves have been known to target puppies and younger German Shepherds.

As previously mentioned, thefts of French Bulldogs have increased by just over double in the last five years, as they quickly become some of the most sought after dogs in the UK. Some of the most high-profile Frenchies to be targeted recently were Lady Gaga’s dogs Asia, Koji and Gustav, who were thankfully returned a couple of days later.

Another bulldog species that has unfortunately seen thefts increase over the last five years is the American Bulldog, with thefts rising from eight in 2016 to 22 in 2020. Again, American Bulldogs can be very valuable dogs, especially puppies, which is why they’re being increasingly targeted. 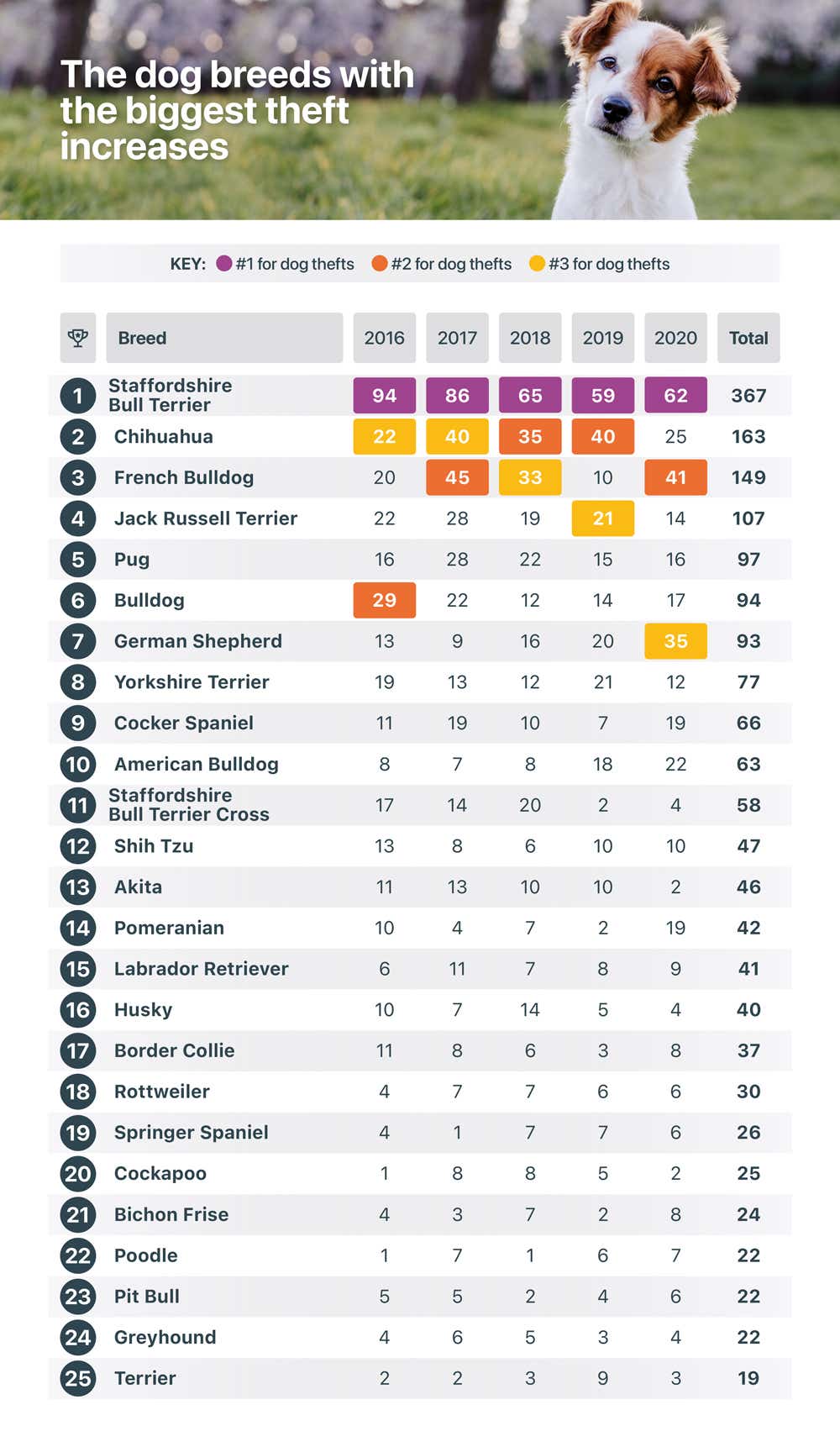 How to protect against dog theft

So, given that dog thefts certainly seem to be on the rise, what can you do to keep your beloved dog safe?

If you haven’t already, it’s vital that you ensure that your dog is microchipped, not least because it is now required by law. This ensures that your dog can easily be identified and returned to you if they get lost and it’s also a good idea for them to wear a collar and ID tag with your name and address on it too.

While it’s always nice when friendly strangers come up to chat to you and say hello to your dog in the park, do remain vigilant of people you don’t know. Always be aware of your surroundings and keep a close eye on your dog. Don’t let them off the leash unless you’re sure that they will come back to you!

Try to keep your dog in view when it's in the garden, especially in the front garden if it can be easily accessed from the street. Make sure that any gates are locked and consider fitting a bell so that you can hear if anyone opens it.

Be careful on social media

As much as you might want to share pictures of your dog online, it’s important to be careful. Try not to give away information such as where you live and walk your dog, or take a look at your privacy settings. Also be very vigilant of strangers asking you lots of questions about your dog online.

We submitted Freedom of Information requests to the police forces of the 50 most populated towns and cities in the UK, as well as each London borough, requesting the number of reported dog thefts in the last five years in each, as well as the number of thefts for each specific breed of dog.

Note that forces that refused our request or failed to reply by April 29th 2021, were omitted.

Also note that a small number of forces were unable to break down their thefts by breed, so the number of thefts listed by city will not match the number listed by breed.