The world's most beautiful palaces, according to the golden ratio 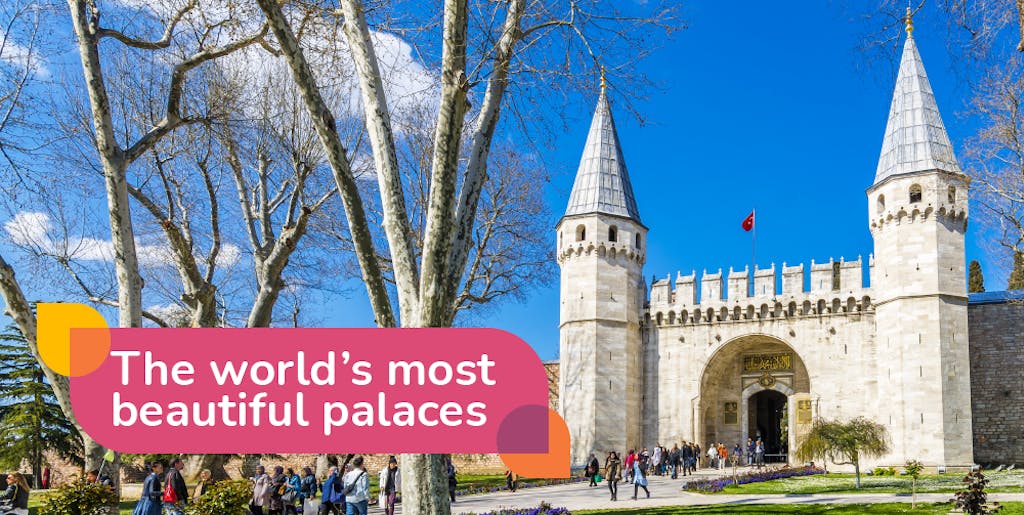 From England’s iconic Buckingham Palace to Germany’s Disney-like Neuschwanstein Castle, palaces are found in every shape, size, and style all over the world. But which palace is statistically the most beautiful according to science? Using the golden ratio, our experts sought to find out.

Protect your own palace and compare home insurance for the best deal for you.

The analysis identified the 25 most popular palaces around the world and noted down the dimensions of the front of each residence. Next, our experts compared each palace’s measurements to the golden ratio - a mathematical ratio that indicates a balanced and aesthetically pleasing composition.

From this, our experts were able to determine how close the palace’s dimensions are to the golden ratio, which is 1.61803398875. In essence, the smaller the percentage difference, the more statistically beautiful the palace.

The top 10 most beautiful palaces worldwide, according to the golden ratio 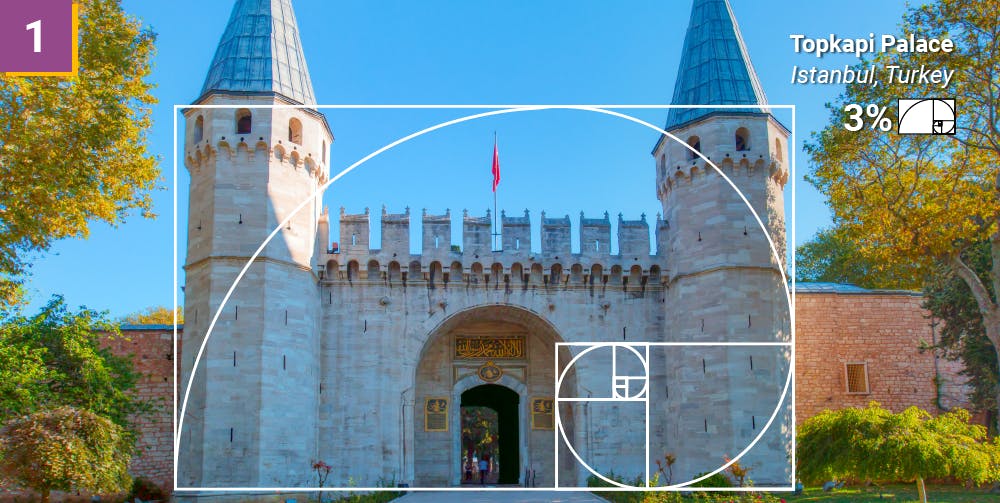 With a height to width ratio working out at 1.572 - just 3% off the golden ratio - Topkapi Palace, found in Istanbul in Turkey is the most statistically beautiful worldwide.

This luxurious palace, surrounded by pavilions, gardens and four courtyards, is the former primary residence of the Turkish royal family between 1478 and 1853. The impressive spectacle, which is now a large museum, is among the UNESCO World Heritage List, so it comes as no surprise that this palace takes the top spot. 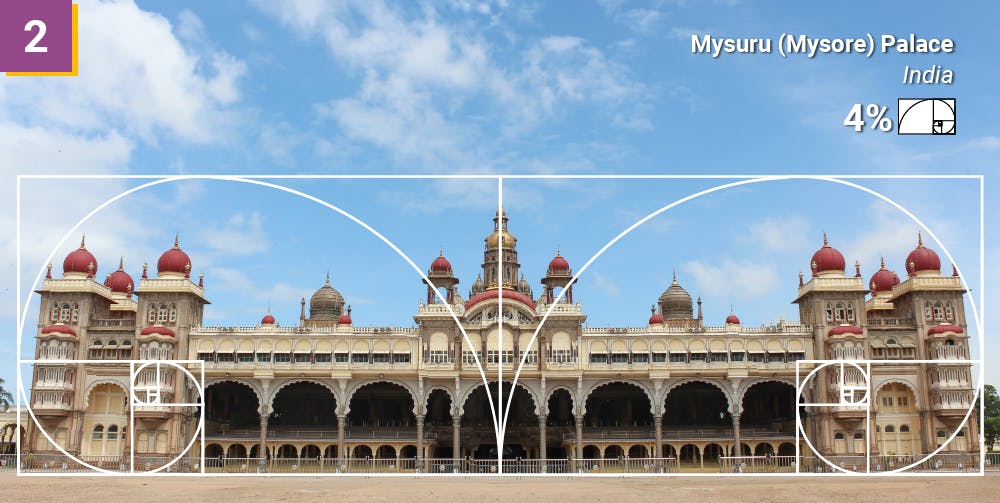 Mysuru Palace in the town of Mysore in the Indian state of Karnataka, also known as Mysore Palace is revealed as the second most beautiful. It has a height to width ratio of 1.690, just 4% off the golden ratio, making it among the most beautiful palaces worldwide.

The striking historical palace is a three-story high stone structure with characteristic marble domes, surrounded by a large garden. After the Taj Mahal, it’s one of India’s most famous tourist attractions, with more than six million visitors each year. 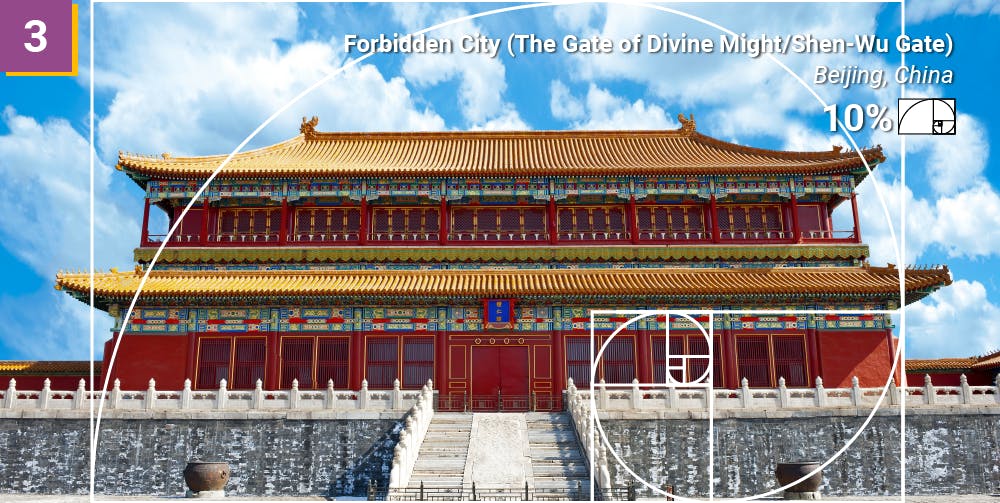 China’s Forbidden City, which sits in the centre of the Imperial City of Beijing and is surrounded by opulent imperial gardens and temples, comes in third place. The palace has a height to width ratio of 1.783, which is a 10% difference from the golden ratio.

The temple, consisting of 980 buildings, 8,886 rooms and covering 720,000 square metres, is described as the largest collection of preserved ancient wooden structures in the world and has been awarded world heritage status by UNESCO. It served as the home of Chinese emperors and their households and was the ceremonial and political centre of the Chinese government, for more than 500 years. 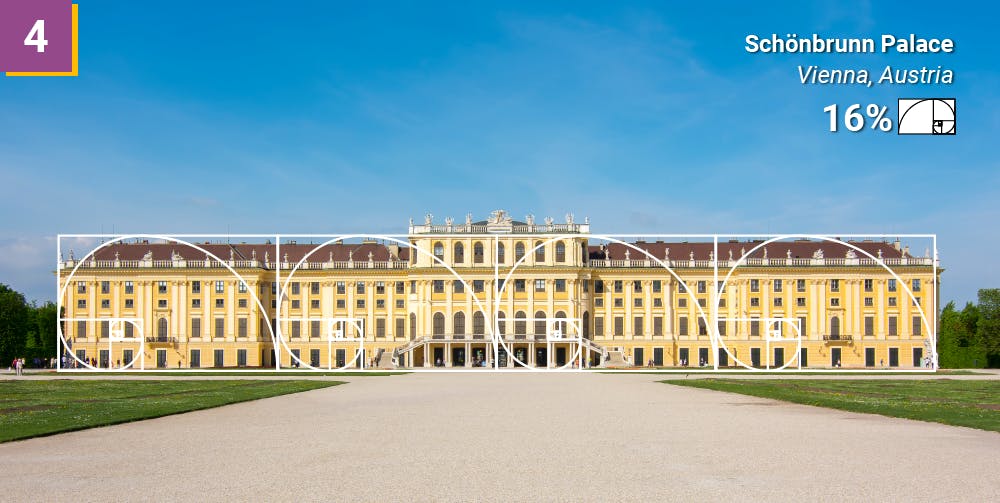 Also among the most beautiful palaces in the world is Schönbrunn Palace, located in Hietzing in Austria. The palace has a height to width ratio of 1.359, which is a difference of 16% from the golden ratio, resulting in a ranking of fourth place.

The 1,441 room palace is one of the most important architectural, cultural, and historical sites in Austria. With a history spanning over 300 years, it has been a significant tourist attraction since the mid-1950s and is a listed UNESCO World Heritage Site. 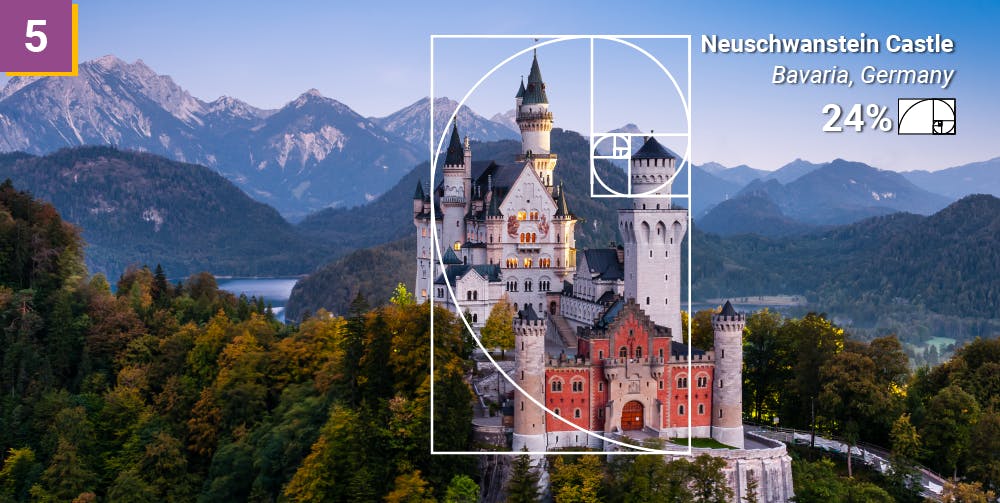 Neuschwanstein Castle, located in Hohenschwangau in the German Alps, rounds off the top five most statistically beautiful palaces in the world. The palace has a height to width ratio of 2, which is 24% off the golden ratio.

This 19th-century palace, situated on a rugged hill in southwest Bavaria, was intended as a private residence for King Ludwig II of Bavaria. It opened for visitors shortly after his death in 1886 and has more than 1.3 million visitors annually. It was this fairy tale-like castle that inspired Walt Disney to create Sleeping Beauty Castle in Disneyland. 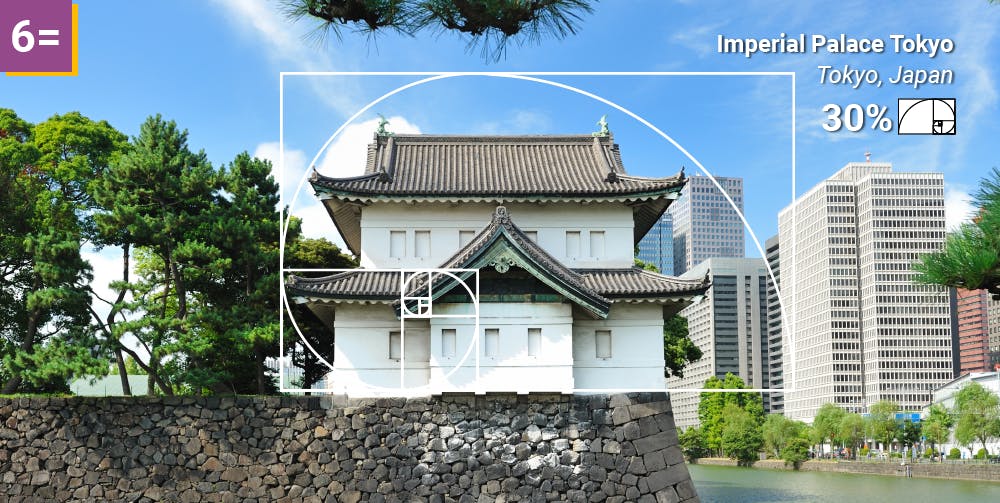 The sixth most beautiful palace in the world is Tokyo’s Imperial Palace, along with Château de Chambord in France. Imperial Palace differs 30% from the golden ratio’s proportions with a height to width ratio of 1.133.

The palace lies in a large area of parkland located in the Chiyoda district of Tokyo and contains several buildings, including the main palace itself. The palace spans 0.44 square miles and at one point in the late 1980s was said to have been valued at more than the value of all the real estate in California combined. 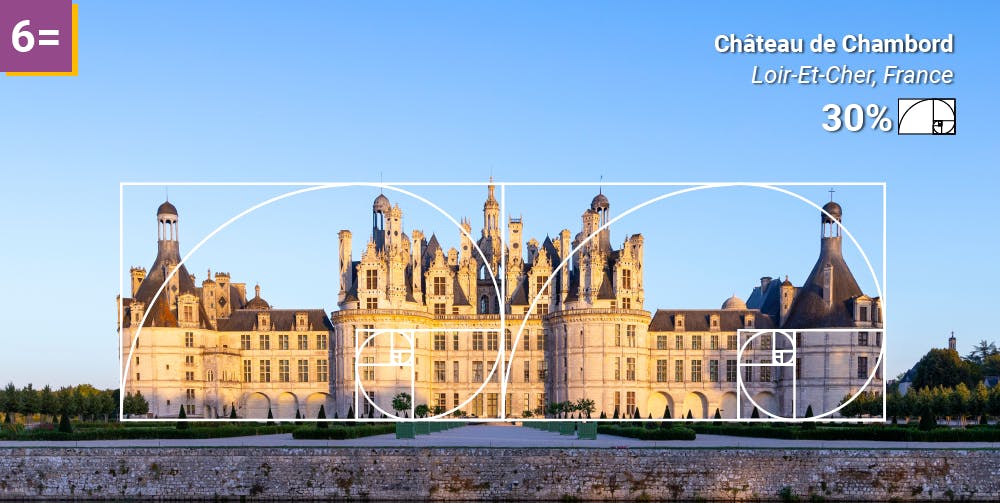 Ranking in joint sixth place with Tokyo’s Imperial Palace with 30% off the golden ratio’s proportions is Château de Chambord in France after our calculations found the palace has a height to width ratio of 1.125.

The palace, located in Chambord, Loir-et-Cher, is one of the most recognisable châteaux in the world due to its distinctive French Renaissance design. It was built to serve as a hunting lodge for Francis I, and it’s rumoured that Leonardo da Vinci may also have been involved in the design. Situated in Avignon, France, the Palais des Papes has a height to width ratio of 2.158, which is a difference of 33% from the golden ratio. This means the medieval Gothic-style European building is the eighth most beautiful palace in the world.

The Palais is made up of two joined buildings: the old Palais of Benedict XII, and the new Palais of Clement VI. Together, they form the largest Gothic building of the Middle Ages, resulting in world heritage status by UNESCO. 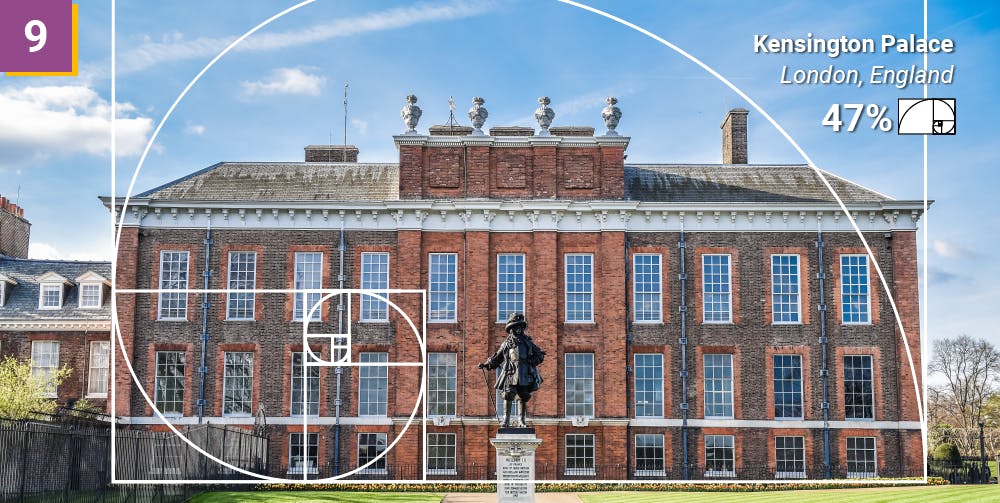 Ninth place goes to England’s Kensington Palace, home to the British Royal Family since the 17th century. With a height to width ratio of 2.375, which is a difference of 47% from the golden ratio, this ratio sits among the top 10 most beautiful palaces in the world.

Owned by Her Majesty Queen Elizabeth II and the Crown Estate, the palace is currently the official London residence of the Duke and Duchess of Cambridge. Alongside Buckingham Palace, located nearby in Westminster, the building is a popular attraction among Brits and tourists every year. 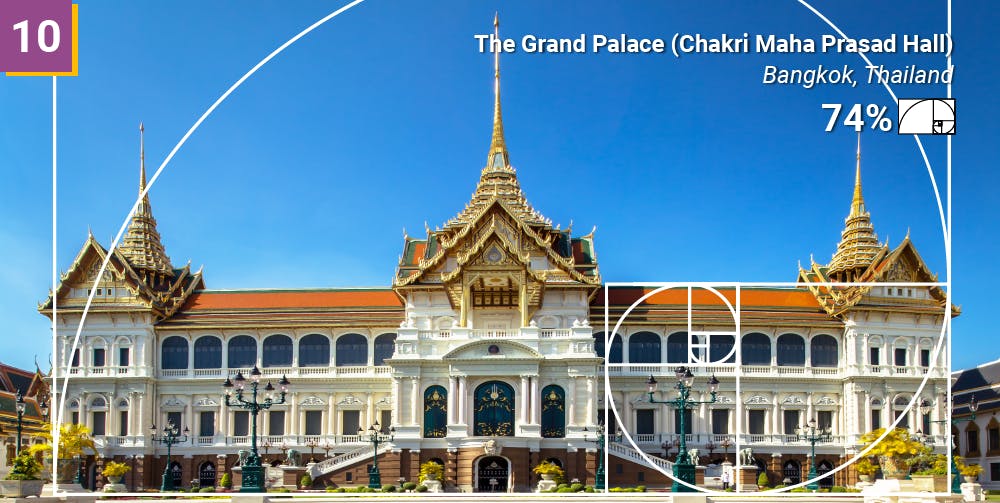 Rounding off the top 10 most beautiful palaces of the world is The Grand Palace in Bangkok, Thailand in tenth place. The palace has a height to width ratio of 2.813 - a 74% difference from the golden ratio.

The palace is made up of numerous buildings, halls, pavilions around open lawns, gardens, and courtyards. Its asymmetry and eclectic styles exist due to its ongoing development from reigning kings over 200 years.

Where are the world’s most beautiful palaces? 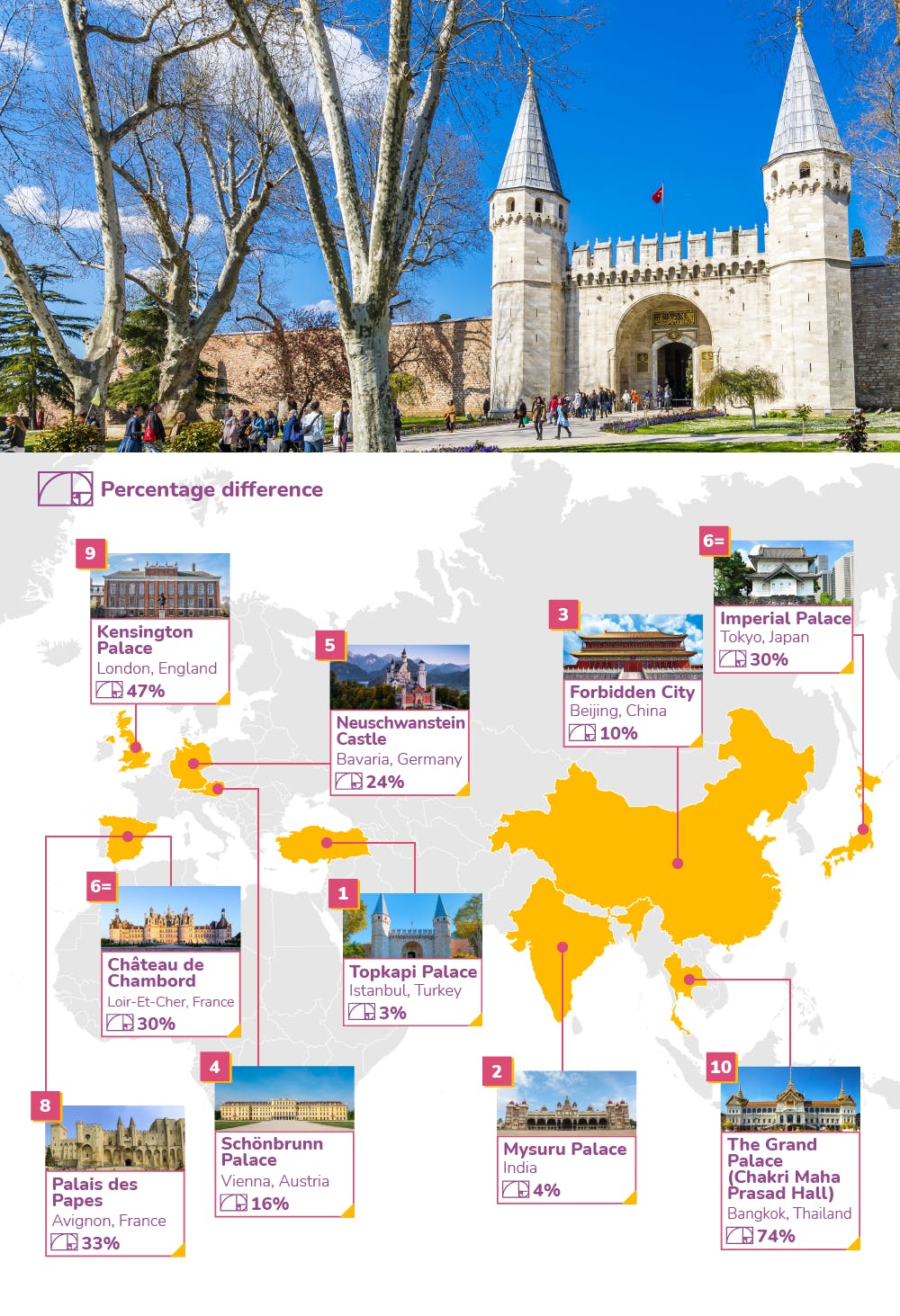 Protecting your own palace with home insurance

You can either buy the policies separately or get them together as a combined policy. If you're a homeowner and own the freehold to your property, it is advisable to get buildings and contents insurance on a combined policy. Here’s some more information on how to choose the right home insurance.

Protect your home and belongings for less by comparing home insurance policies to cover a range of property types and individual circumstances.

* In the cases where the palace was not a single building but a complex of palaces, the most representative palace was chosen: