If you’re looking into updating your handset but you’re not sure where to start, don’t worry – we’ve got you covered. We’ve researched the best Samsung Galaxy S8 deals as well as the pros and cons of the phone itself. 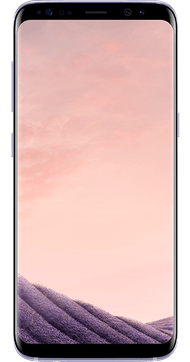 Samsung Galaxy S8: About the hardware

The Samsung Galaxy S8 might not be the newest model on the market, but it’s likely to be a great fit for Samsung users who want something familiar and affordable with a little extra power.

One of the device’s signature features is its 5.8-inch screen. It’s not the biggest in Samsung’s range but it does make use of the innovative infinity display, meaning every inch is covered. This means you get more space on your home screen for adding apps and you can also access cinematic view when you’re watching films or series on your phone.

The phone also has an iris scanner for unlocking, which adds an extra layer of security. While this is undeniably innovative, it has also attracted some criticism because it can be clumsy to use and because it might not be the most secure method of protecting your device.

The first thing you’ll notice using a Galaxy S9 instead of an S8 is the processing speed. The newer model has had a power boost, so it makes for a smoother user experience. You’ll also notice the phone has been made slightly bigger and slightly heavier, although not enough to be inconvenient when carrying it around.

The other significant shift between the S8 and the S9 is in relation to the camera. While the megapixels are similar, there are more features to help you out with your photography in the newer model, including slow motion options and an emoji generator.

The big appeal of the Galaxy Samsung S8 is that, because it’s been on the market for a while, it’s a more affordable option. As well as contract prices coming down, you’re more likely to find second-hand refurbished phones or trade-in options and SIM-free offers for this handset.

Another key feature is the infinity display, which uses Samsung’s signature bezel-less design to give you a seamless experience. The display defaults to Full HD+ for the best possible viewing experience, although you can change it to Quad HD+ if you want to preserve your battery life.

Of course, a phone having been on the market for a while means that it will potentially carry some cons as well as pros. This isn’t the latest in Samsung’s line and so it won’t have the most up-to-date technology and features. If you use your phone for basic social media scrolling and WhatsApping, this might not be an issue. However, if you want to do anything particularly advanced like make movies or play big games on your phone, you might want something newer that has the functionality and processing power to accommodate that.

One of the main criticisms of the Samsung Galaxy S8 has been the placement of the finger scanner. It sits on the back of the phone, whereas most devices have it on the front, and so it can take a few goes to get used to. Of course, there are other options with the iris scanner or facial recognition technology. However, iris scanners have also had some bad press as they’re said to be easier to hack than expected, so you’ll need to weigh up the different options to decide what suits you.

The most notable feature of the Samsung Galaxy S8 is its large, 5.8-inch screen. It’s great for watching content as well as for filling up your home screen with your favourite apps. It’s got the signature curved infinity screen that makes the most of the space available and gives you a more cinematic experience when you’re watching series or films.

There’s also 64GB of storage and a 12-megapixel camera along with an 8-megapixel front camera for the selfie-takers. A quick-launch button for the camera is ideal for when you have to get that last-minute shot in and the front camera includes autofocus to help keep blurriness at bay.

A big selling point is the Bixby assistant, Samsung’s own artificial intelligence system. With voice recognition and a search function included, it also offers Bixby Vision, which is an image recognition system that can help you spot, shop and track down items you see while you’re out and about. Bixby has struggled a little to keep up with established AI assistants like Siri, but it provides some handy functionality, such as reminders and alerts.

There are also the three different choices of locking system: there’s the classic fingerprint, facial recognition or the innovative iris scanner. Despite some of the complaints about the fingerprint scanner placement and the iris scanner issues, it’s handy to have options so you can choose the system that best suits you.

How can you get the best Samsung Galaxy S8 deals?

Since the Samsung Galaxy S8 has been on the market for a while, it may be more difficult to find contracts on offer. While it’s still worth shopping around to see what different network providers have to offer, you may find there are only a few options to pick from. However, the flipside of that is that there are often more SIM-free handsets available and they may be more affordable if you’re paying upfront.

One of the most important factors to look out for when choosing your contract is the data usage that’s included in your monthly package. While unlimited texts are standard practice and unlimited minutes are also fairly easy to come by, unlimited data is rare. The more data you want, the more expensive your contract will be, but it’s often cheaper to sign up for a bigger data plan than to add it on as you need it.

It’s always worth checking how long any contract you’re signing up for runs and how that affects the overall cost you’ll be paying both for your package and your handset. Different operators will offer different lengths of contract, often ranging from one year to two and requiring you to pay a monthly sum towards your handset as well as the normal billable amount. There are also sometimes yearly inflation price jumps to consider.

Is it better to get the Samsung Galaxy S8 on contract or SIM-free?

Because it is an older model, you may find that there are less Samsung Galaxy S8 contracts available from various service providers. However, those that you do find will likely be much more affordable than the newer models. The alternative to a contract is to buy the handset as a SIM-free phone, which allows you to choose your own network provider. However, because you’ll have to pay for your phone upfront rather than spreading the cost over a number of months, this can require a bigger down payment.

Can you get the Samsung Galaxy S8 as a refurbished phone?

You might find some networks like giffgaff are able to offer refurbished Samsung Galaxy S8s at a lower cost. These are typically phones that have been traded in by other customers and have been brought up to a good working standard. You’ll usually get the same warranty period as you would with a new phone should you encounter any issues or find the phone is a little more worn than you expected.