Released as part of Samsung’s Galaxy 10 series in 2019, the Samsung Galaxy S10e is an affordable alternative to the S10 and S10+, promising many of the same top-tier features at a lower price point. 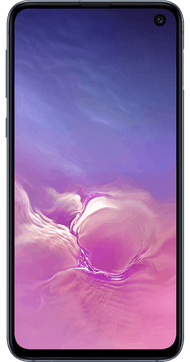 Should I buy the Samsung Galaxy S10e?

For a phone that - as of March 2021 - is two years old, the Samsung Galaxy S10e surprisingly holds up well against newer handsets. Samsung’s decision to offer a more affordable version of its ‘at the time’ flagship was a great idea with the main differences being a flat screen, instead of curved, and one fewer camera lens on the back. This is phone range, however, that has been superseded twice (the S21 is the newest handset out), so make sure the price complements the age of this handset before buying.

The phone initially ran with the Android 9.0 Pie operating system, but this has since been upgraded to Android 11. Samsung has confirmed that the phone will also get upgraded to Android 12 when this is available so there is a decent amount of life left in the software.

When it comes to storage, there’s plenty available with a standard 128GB and 6GB of RAM is not to be sniffed at, either.

If you’re torn between the Samsung Galaxy S10 and the more budget-friendly Samsung Galaxy S10e, you’ll need to think about which features are most important in a phone. As a flagship device, the original Galaxy S10 has all the high-end specs you’d expect, including three rear cameras and a higher-resolution AMOLED display. Its battery is also slightly larger than the S10e.

However, the S10e boasts many of the same features. One of the main differences is that the S10e’s fingerprint sensor is located on the side rather than embedded into the screen. Its screen is flat rather than curved, and there are only two rear cameras. Finally, the display is Full HD+. The RAM is also now 6GB and not 8GB but even two years on, this is still a powerful, compact handset.

This phone offers 128GB of internal storage. There’s also the option to expand its storage with a micro SD card. To use the expandable storage feature, pop in your micro SD for up to 512GB of additional storage space.

How much memory does my Galaxy S10e need?

With both internal and external storage on hand, the Galaxy S10e offers more than enough memory for the average user.

If you prefer to download large files or take a lot of photos, you’ll be able to use the micro SD card for additional storage.

With 512GB external storage you can:

Equipped with a 3,100mAh battery, the S10e holds its charge for about 24 hours, putting it roughly in line with the other S10 models. It’s powerful enough to last throughout the day, standing up to scrolling, browsing, and streaming.

The phone is also equipped with Wireless Charging capabilities, which means you can get a quick power boost by placing it on the charging pad.

There’s a veritable rainbow of options when it comes to the Galaxy S10e, whether you prefer cool minimalism or pops of vibrant colour. Options include:

The phone comes equipped with a front camera as well as two rear cameras - the Samsung Galaxy S10 has three - giving budding photographers plenty of ways to capture memorable snaps.

Camera specs include the following:

The S10e offers top-of-the-line Samsung security, with a fingerprint scanner on the side of the handset. It’s intuitively positioned to unlock when you hold your phone naturally. The phone can also be secured with face recognition, a password, pattern, or PIN.

While the fingerprint scanner on the side works well, this is a rather old way of using the technology - most phones will have fingerprint scanning built into the screen. A handset like the Google Pixel 5, though, has its scanning on the rear.

Like other Galaxy devices, the S10e includes Samsung Knox to protect it from the moment it’s switched on. This includes multi-layered lines of defence to keep your data secure from malware.

The Galaxy S10 range was released on 8 March, 2019. The S10e is only available on select networks now because of its age. There is a selection of pay monthly and pay as you go deals to choose from, however. One of the only networks currently allowing for Galaxy S10e contracts is Three.

What are the best Samsung Galaxy S10e deals?

Whether you opt for a monthly or pay as you go contract, the best Samsung Galaxy S10e deals involve more than cost alone. When you’re comparing options, be sure to take the following factors into consideration:

You’ll have the option to sign up for a pay as you go contract, which is better for those who can afford the upfront cost of an S10e and prefer a bit of extra freedom. Otherwise, you can spread out the cost of your handset by signing up for a pay monthly contract. These can last anywhere from 12 to 36 months, so be sure you’re ready to commit as it can be difficult to switch mid-contract.

Which networks are available in your area? You can find out by using the Ofcom postcode checker to get the best possible service. Keep in mind that the S10e doesn’t support 5G networks, so you’ll need to upgrade to the S10+ 5G or subsequent S20 and S21 handsets if you’re interested in accessing this type of network speed.

From Virgin Mobile to Vodafone, network operators throw in little perks or bonuses as part of your contract. Look for cashback offers or free trials of subscription services. If you’re an existing broadband customer, you might save money by bundling your services.

The S10e is the entry-level model in the Samsung Galaxy S10 range, making it the most affordable option. When it was released, the S10e would set you back £669 purchased off-contract. Samsung’s now released the S20 series, which means you can find the S10e for around £450.

Pay monthly contracts are even more affordable, starting from as low as £15 per month with an upfront payment. If you only want to play a small amount upfront (£39), then the lowest monthly contract price is currently in the region of £27 per month. In addition to the monthly price, there are a few extras to consider:

Samsung S10e pay as you go

For those who prefer added flexibility, a pay as you go deal can be a better option since you only need to pay for minutes and data as you use them. SIM-only deals can start from as little as £4 per month and are offered by most major networks. If you’re looking for a cheap S10e, you might want to consider purchasing a refurbished model for even greater savings.

Is the S10e waterproof?

Yes. Like the S10 and S10+, Galaxy S10e features an IP68 rating. This is the highest standard for mobile devices, ensuring the phone can stand up to dust or water. However, submerging your phone in water for lengthy periods of time is still not recommended.

Yes. Like other Samsung Galaxy phones, the S10e includes the Bixby virtual assistant. In addition to organising your schedule, playing music or setting a smart alarm, you can also use Bixby’s AR features. Point the phone’s camera at an object and you’ll find out more information about it, instantly with Bixby Vision. The phone’s designed to adapt to your habits as well with Bixby Routines, automatically switching into Night mode to optimise your sleep schedule.

Which S10 phone is right for me?

This depends on your budget and preferred features. The Galaxy S10 is the range’s flagship model, while the S10+ gives you a little bit more. The S10e is the best choice if you’re interested in a cheaper phone deal that doesn’t compromise on major features. There’s also an S10 5G device, bringing 5G connectivity to the range. If you’re interested in a flagship Samsung experience, go for the original S10 or S10+. If you want to save some cash, the S10e will be more your speed.

What about the Samsung S21?

There really aren’t too many major differences between the S10e and other models from the S10 series. The S21 range is Samsung’s new flagship, and here you’ll start to see some bigger differences to match the much higher price tag. For example, the Galaxy S21 has a 6.2-inch Flat FHD+ Dynamic AMOLED 2X Infinity-O Display (2,400x1,080 pixels) screen, along with a much faster refresh rate of 120Hz. This means that it’s better suited for playing games or watching films, with near-instant screen updates. The S21 offers three rear cameras in comparison to the S10e’s two, along with a 64MP telephoto lens and features like Live Focus to play around with. You get more out of the phone, but you’ll pay more as a result.