If you can find a Note 9 on contract then you will get a solid handset with S Pen functionality, packed with tech that’s only now starting to look a little dated. 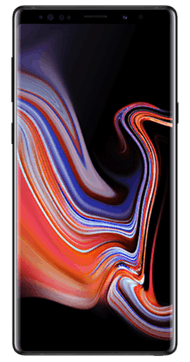 Should I buy the Samsung Galaxy Note 9?

If you are on the hunt for a discounted Note then the lowest we would go is the Samsung Galaxy Note 9. At launch - August 2018 - its specs were top notch, comprising a 6.4-inch Super AMOLED display, a big battery and 6GB of RAM. While some of those specs still sound decent, in a 5G world this is a phone that is starting to show its age.

Samsung Galaxy Note 9: About the hardware

Now 2.5 years old (as of February 2021), the Note 9 is on the dated side, especially as Samsung is not shy about releasing dozens of new phones every year and its latest, the Samsung Galaxy S20 Ultra, may well have finished off the Note line given it has S Pen functionality.

Unfortunately, this means that the Note 9 may not be the easiest phone to source, unless you look for a refurbished model. On the upside, as an older phone, you’ll likely find it much more affordable than the newer Note 10 and certainly Note 20 range.

The Samsung Note 9 offers a relatively standard 128GB of storage. Away from the UK there is also a 512GB model. The first should absolutely be more than enough for most users – music, games and photos included, while 512GB (if you can get hold of this model) will mean you’re never short of space again. However, if you do find you’re in need of more, then worry not, an SD slot lets you expand, so it’s a great way of knowing you’ll never be caught out. If having as much storage as possible is a big deal for you, then consider the Note 10 which takes these already generous offerings and adds the opportunity to add a massive 1TB of storage.

Interestingly, the Galaxy Note 9 battery is actually more powerful than that of the standard Note 10, though smaller than the Note 10+ and Note 10 5G. Compared to the Note 20 (4,300 mAh) and it’s also smaller. At 4,000mAh you should certainly be able to get through the day, and fast charging options will get you powered up again in no time.

The Note 9 isn’t quite as eye-catching as the Note 10, but its overall look is just as slick in the following shades:

The Note 9 comes with multiple cameras to help you get the perfect shot:

The S Pen is a great gadget you’ll want on every future phone you ever own. As well as acting as a fantastic stylus for note-taking and sketching on the go, it also serves as a shutter remote. That means you can snap a photo from 10 metres away - no more arm-stretching to get the whole group into that selfie.

What are the best Samsung Note 9 deals?

The Samsung Galaxy Note 9 is not the easiest phone to get your hands on. Like we said, it’s been around for quite some time, and it has also been replaced by a whole family of Note 10 phones. Your best bet is to look for a ‘Good as new’ or ‘Like new’ phone.

‘Like new’ phones have been previously purchased and then, for whatever reason, returned within 14 days. That means your phone has never been extensively used or owned, but a sizeable chunk might still be taken off the sale price so you can get a great deal this way. Refurbished phones, on the other hand, can be a little more well-used, though only giffgaff stocks phones of this sort. Depending on how fussy you are about the appearance of your phone, this may be a great option. Keep in mind that the older a phone is, the more scuffed you can expect it to be, but the smaller you can expect the price to be too.

What Samsung Note 9 price should I expect?

The Samsung Note 9 should set you back around £600 new (we found one available on Amazon for this price), so it’s not exactly cheap. That said, a refurbished unit can easily cut that cost in half and to be completely realistic, getting ahold of a totally box-fresh Galaxy Note 9 is quite a challenge.

As mentioned, the Note 9 isn’t very easy to find on a pay monthly plan, and your best bet is to hope that one of the major networks get a ‘Like New’ model in. Keep in mind that these options might also be exclusive to your local branch, so keep popping in there if your heart is set on a Note 9.

A quick warning, no matter how badly you want the Note 9, we wouldn’t advise turning to online market places or bidding sites. These phones almost certainly haven’t undergone professional refurbishment, just a factory reset, and all that means is that data on the phone at a local level is gone, but anything with an online aspect remains. So, things like Google accounts, app log-ins or even any nasty malware may still be active, and you might end up locked out of your newly-purchased phone.

Can the Samsung Galaxy Note 9 use 5G?

No. The latter Samsung Galaxy Note phones do have 5G (from the Samsung Note 10+ 5G onwards).

Is the Samsung Galaxy Note 9 for gamers?

Given that the Note 9 has the ability to connect to your PC so you can play on your phone, it’s no surprise that the battery is on the larger size. It makes it a fantastic choice for any lover of games, whether you plan to stream from your gaming rig or just enjoy your favourite mobile games.

Does the Galaxy Note 9 have a headphone jack?

Yes, though it is the last in the Note line to feature it, as the Note 10 did away with the beloved 3.5mm headphone jack.

Which is the cheapest Galaxy Note 9 deal?

You will be lucky in 2021 to find a deal on this phone at all. Don’t pay over the odds for a Note 9, no matter how rare it now is. You can, after all, get yourself a brand-spanking new Note 20 for around £899, so don’t be parting with similar amounts for an older phone.

What’s the difference between the Note 9 and the Samsung Galaxy S9?

Good question! The most obvious difference is the use of a stylus by the Note series, making it a ‘phablet’ i.e. a phone and a tablet. The Note series has a more professional edge, aimed at those who need a dedicated work phone, especially creatives who can benefit from sketching on the go. It also boasts various camera capabilities and generous storage. The S series is more of an everyday phone suitable for casual use, but of course, the S line is still very, very impressive, so it’s well worth looking at both. Here’s a quick comparison:

Is the Samsung Note 9 waterproof?

Is the Samsung Note 9 dual SIM?

The Note 9 is hybrid SIM – that means you can use it as a dual-SIM phone if you like, but you do so at the expense of being able to use an SD card. This is because you use the same slot for either a SIM or SD card, but not both.

Which other handsets should I consider?