While the Samsung Galaxy Note 8 has been surpassed by the Galaxy Note 10 and the Galaxy 10 Plus, there’s still a lot to love about it - find out why below. 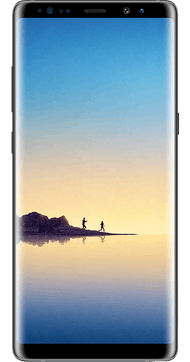 Samsung Galaxy Note 8: About the hardware

The Samsung Galaxy Note 8 came out in August 2017, which does make it a slightly older model and this is reflected in its limited availability. However, because of this, it’s a more affordable option if you do manage to source one. And if you’re after a device to help you make that transition from small smartphone to ‘phablet’, the Note 8 isn’t a bad way to go.

The Samsung Note 8 storage comes with either 64GB, 128GB or 256GB of internal storage, which can be expanded up to 256GB with the use of an SD card. This should be more than enough storage for most users.

With any of these storage options, you should be able to happily use most apps and store plenty of media right on your phone. Plus, if you ever need more, you can just use an SD card or tap into Cloud storage to free up space on your device.

The Samsung Note 8 battery was sure to be an improvement on the Note 7, given that the phone experienced issues with overheating and exploding batteries. Samsung claims the Note 8 offers up to 22 hours of talk time and 13 hours of internet usage on a 3300mAh capacity. Again, this falls a little short of modern-day phones but it should see you through the day without any issues.

The Note 8 comes in two colours:

What about the Galaxy S series or A series?

If you’re going as far back as the Note 8, which is not easy to find, you might want to consider more easily available alternatives from other Samsung series. The S series is the brand’s flagship line, making it a very high-quality, albeit expensive, option. The A series was made to be more affordable, and while they don’t quite live up to the S series or the Note, the most recent releases like the Samsung A71 and the 5G compatible models do deliver impressive tech for a much lower price.

Samsung’s Note 8 cameras are as follows:

The S Pen stylus is neatly stored within the body of the phone and lets you take notes, jot down ideas or create sketches on the go – ideal for creative types. The multi screen display also means you can have everything you need at your fingertips, great for making notes with the S Pen on one side and reading through a spreadsheet on the other.

The Note 8 works with Samsung Knox real-time protection to keep your phone and data safe. The Note 8 also uses iris recognition so only you can access your data.

What are the best Samsung Note 8 deals?

We recommend keeping the following in mind when looking for a deal:

How expensive are Samsung Note 8 deals?

As we mentioned, this phone isn’t easy to find, so deals will likely be cheap given that you’re most likely to find pre-owned or refurbished phones. With a second-hand Note 8, you can expect to pay around £300. And if you can find it brand new, the prices are closer to £500.

Again, the Note 8 isn’t in huge supply, so pay monthly deals are low on the ground. As of June 2020, there doesn’t seem to be any in stock at the main networks, but this could change as refurbished units come into stock.

Best Note 8 deals on pay as you go

You can get the Note 8 as a pay as you go option with:

giffgaff refurbished phones come in a range of conditions, from barely used to well-loved, so you shouldn’t automatically assume your phone will be box-fresh when you order it.

You can use the Samsung Galaxy watch with the Note 8 to make the most of your Samsung devices.

Can the Samsung Note 8 use 5G?

No, the phone was released before 5G was an option.

Which is the cheapest Galaxy Note 8 deal in the UK?

Currently the cheapest Galaxy Note 8 deal is likely to be a refurbished phone, simply because there aren’t many alternatives.

What is the best mobile network for the Samsung note 8?

Considering it’s the only one offering it, giffgaff is the best mobile network to go with for this phone. However, all the network’s phones do come unlocked, so you can switch to a new network whenever you like.

What’s the difference between the Note 8 and the Samsung Galaxy S8?

The Samsung S series offers all-round phones for daily use, so you may find things like battery life is slightly better. However, storage and RAM are better in the Note series, which supports more work-oriented tasks. The Note series also comes with a stylus, while the S series does not.

No, the added ability of the S Pen to control camera, volume and scrolling is not available on the Note 8, where it only acts as a stylus.

Is Samsung better than iPhone?

iPhones are impressive and popular, but so are Samsung devices. Samsung has a much wider variety and its phones may be seen as more capable all-rounders compared to iPhones, which are lacking in areas like storage. Either way, you’re unlikely to be disappointed when you have a choice between two premium phones.

Why should I use a Galaxy Note?

Offering a stylus and a more professional orientated user interface, the Note’s main point of difference to the S series, or indeed any other phone series, is its functionality for professionals on the move. You can view multiple documents at once, make notes on the go, send notes or gifs made in your own handwriting or draw up a quick sketch. This may be something of a learning curve for those who are used to traditional smartphones, but the Note ‘phablet’ offers a whole new way to use and make the most of your phone. So, if you are considering it, the Note 8 is a pretty affordable choice.