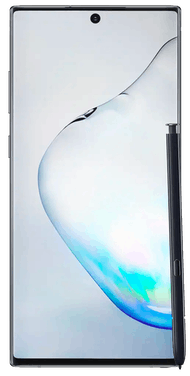 Should I buy a Samsung Galaxy Note 10 Plus?

The Samsung Galaxy Note 10 Plus is a 6.8-inch smartphone that comes with the addition of a stylus, called the S Pen. At the time of its launch, in mid-2019, it was a phone with cutting-edge specs and a huge screen. Nearly two years on, though, it’s still a super-smart smartphone but it’s starting to show its age.

Samsung Galaxy Note 10 Plus deals: About the hardware

For a smartphone that’s been superseded - since its release, as of April 2021, the Galaxy Note 20 range has replaced it - it’s still packing some decent specs. There’s a whopping 12GB RAM to power up your gaming and creative tasks, a 4300mAh battery ensures all-day power, while the Snapdragon 855 chipset fuels quick, responsive results. The phone’s design is bold and bright, with an AMOLED Infinity-O display delivering a 3040 x 1440 resolution. It comes with HDR Plus certification as well, which brings your media content to life with vivid, rich colours.

The Samsung Galaxy Note 10 Plus vs. S10 Plus

What about other phones in the Galaxy range? There are quite a few differences between the Note 10 Plus and the phone range that superseded it, the Samsung Galaxy Note 20 Ultra 5G. For a start, the name. Samsung has decided to drop the Plus moniker for Ultra which, in our eyes, does give everything a more premium feel. But the upgrades don’t stop there, The Note 20 Ultra 5G has a 6.9 inch screen, compared to the Note 10’s 6.8. It also has a better refresh rate at 120Hz. The processor in the Note 20 Ultra 5G is the upgraded Snapdragon 865.

Camera wise, there is a decent upgrade, too, with the Note 20 Ultra 5G offering a whopping 108MP main camera, compared to the Note 10’s 12MP sensor. Given the likes of Sony still like to use a 12MP sensor, this isn’t as huge a change as it looks on paper, though.

Take your pick from 256GB or 512GB of internal storage. If that’s not enough, the Note 10 Plus also includes a microSD card slot to give you an additional 512GB of external storage.

How much memory does my Galaxy Note 10 Plus need?

Between the internal and external storage, most users will have plenty of space to store their media files. If you’re torn between the 256GB and 512GB devices, here’s a quick look at the difference:

The 512GB device allows you to:

The 512GB option will be a better choice for power users who need to store a significant number of files for work or leisure. Add the external storage capabilities and the Galaxy Note 10 Plus offers more than enough memory for the majority of smartphone users.

The Samsung Note 10 Plus comes fully equipped to last more than a day with its 4,300mAh battery. The battery works in a smarter way to learn your daily routine, adjusting phone settings to save battery life for longer. The phone also includes fast charging capabilities to bring the drained battery back to full power within 30 minutes. The box comes with a 25W charger, but you can upgrade to 45W for the fastest possible charging times.

The Aura Glow option combines several colours into one with its shimmery effects and reflective finish.

Samsung doesn’t skimp on the cameras with its Galaxy Note 10 Plus, and the large screen lends itself well to showcasing all your best snapshots. A highlight is the Depth Vision camera feature. Simply point the phone at any object, and it will calculate measurements for you. Here’s a rundown of the camera specs:

Between the Depth Vision lens, telephoto, ultra-wide, and selfie cameras, you’ll have plenty of options to play with.

The phone’s equipped with the latest biometric security features, including an in-screen ultrasonic fingerprint scanner. There’s also facial recognition and password protection on hand to keep your data safe.

What are the best Note 10 Plus deals?

As you’ll see above, there are plenty of networks currently offering Samsung Galaxy Note 10 Plus deals. We’ll explore the general pricing options below, but in addition to costs you’ll also want to think about what else you’re looking for in a mobile contract. For example, you might want to take the following factors into consideration:

How expensive are Samsung Galaxy Note 10 Plus deals?

At launch, the starting price point for the 256GB Galaxy Note 10 Plus was around £999. As of April 2021, you can now get the phone for under £500. If you don’t want to pay for the phone upfront, you can also choose from a selection of pay monthly deals.

Pay monthly Note 10 Plus 5G contracts currently start from around £50 per month without any upfront costs. This drops down to around £42 per month, if you pay for a portion of the phone upfront. When comparing pay monthly contracts, be sure to look at the amount of data included. With its large display, this phone is best suited to enjoying entertainment, so you’ll want to be sure to have enough data to make use of it.

Apart from price, you can also compare some of the added perks on offer. This varies by network:

Samsung Note 10 Plus pay as you go

Are you able to purchase your Note 10 Plus outright? If so, you might want to choose a pay as you go plan instead. This gives you the ultimate flexibility to change networks as you please, with low prices starting from around £5 per month for SIM-only plans.

Should I upgrade to the Note 20 Ultra 5G?

If you can get a similar type of deal to the Note 10 Plus 5G then we would recommend it. This is because it’s a more up to date handset with better specs.

What is the S Pen?

One of the standout features on the Note 10 series of phones is Samsung’s ‘S’ Pen stylus, which lets you mark notes directly on your screen. Mark up screenshots, sign forms, and jot down your thoughts with this handy pen. It’s also equipped with Bluetooth, a gyroscope, and accelerometer. This lets you take photos at a distance using the Remote Shutter feature, or swipe through memos with the ‘Air Gestures’ function.

The Note 10 Plus could be a good choice for you if you watch a lot of videos on your smartphone. With a large screen and vibrant display, this phone is designed for entertainment. It’s also a great choice for anyone who loves taking selfies, with its Remote Camera Shutter and Live Focus features. With the S Pen, it’s easy to take notes or make sketches on the go, making it a good choice for creative types. It's still not ideal for those who want a cheap phone deal, though.

What other phones should I be looking for?