The Samsung Galaxy Note 10 boasts a striking screen, as well as a sleek and lightweight design that makes it a very chic option for anyone, whatever their needs might be. Find out more about it below. 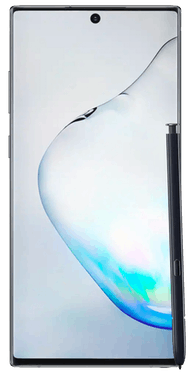 Samsung Galaxy Note 10: About the hardware

The Galaxy Note range is perhaps the best-known “phablet” series on the market, merging smartphone and tablet features including a storable stylus called the S Pen. While most brands have done away with this idea, Samsung continues to prove not only that there’s a market for this sort of device, but that the brand can do it extremely well.

The Samsung Note 10 has a starting storage capacity of 256GB. For casual users, that’s probably more room than you’ll ever need, but you can expand your storage up to a massive 1TB via microSD, which rivals the storage space on a lot of desktop computers.

Samsung claims that the battery in the Note 10 is especially smart, learning your habits so it can direct power away from apps you’re not using. The 3,300mAh battery is slightly behind the Samsung Galaxy S10+ battery, though it should be more than able to see you through the day.

The Note 10 comes in a limited choice of two colours, though it must be said that the Aura glow option is a stand-out style that more than compensates for lack of colour variety:

Samsung offers two size choices for the Note 10, including the Galaxy Note 10 Plus and the Galaxy Note 10 5G. The larger models are a step up from the standard Note 10 - they both feature a 3D camera and half an inch of extra screen. The quality of the display is also better, as is battery life. 5G connectivity comes only with the Note 10 Plus 5G model and does sacrifice the ability to up your storage via SD card, so you’ll have to decide if mobile broadband speed trumps storage in your list of priorities.

The S Pen slots neatly inside the phone and can be used as a camera remote, letting you zoom in, zoom out and press the shutter on your phone. The cameras for the Note 10 are:

You can use extra features to create professional video and images:

As mentioned, the S Pen is more than just a stylus. Remotely connecting to your phone within a 10-meter range, you can control several key functions using just the compact stylus:

The Note 10 offers different options for secure use and file storage:

What are the best Samsung Note 10 deals?

The best Samsung Note 10 deals might not be solely concerned with price (though that will obviously be a significant factor) - make sure you consider all the following too:

How expensive are Samsung Note 10 deals?

You can expect to pay something around the £800-900 for a new Samsung Note 10. Pay monthly will depend on all sorts of variables, including the length and the upfront cost you’re willing to pay, but generally, you’ll be looking at around £50 per month.

The Samsung Note 10 is widely available, though some networks may now be down to ‘like new’ refurbished phones for the Note 10 model with only the 5G version as new. The following providers all offer a pay monthly plan:

Networks generally price their plans very similarly, adding incentives to their deals in the form of free entertainment apps, free data, customer perks or flexible contract lengths, so be sure to shop around. After all, one network may offer the lowest price, but another may give you a year of free Amazon Prime access, which more than makes up the difference, especially if you were planning to subscribe anyway.

Best Note 10 deals on pay as you go

You can get the Note 10 as a pay as you go option with:

The Note 10, just like all Samsung’s best phones, is compatible with a wide range of accessories including:

No, only the specific Samsung Galaxy Note 10+ 5G can do so.

Does the Galaxy Note 10 have a headphone jack?

No, this phone doesn’t have an headphone jack, so you’ll have to rely on Bluetooth headphones.

Which is the cheapest Galaxy Note 10 deal?

This can change from network to network and varies massively on what you want. If you want unlimited data, your overall deal will be much higher than a 500MB a month option. Similarly, if you opt for a short contract, you will pay more per month than a longer two-year contract.

What is the best mobile network for the Samsung note 10?

Generally speaking, they’re all as good as each other. UK mobile networks have 90%+ coverage across the UK, but if you want to be sure, you might want to use the coverage checker on your chosen network’s website. If you opt for the Samsung Note 10+ 5G you need to absolutely make sure you are within a 5G coverage area. Just having a 5G-enabled phone isn’t enough to get you connected.

What’s the difference between the Note 10 and the Samsung Galaxy S10?

Samsung has a huge variety of series when it comes to its mobile phones. The Note series has been designed to be a more professional phone, with loads of storage, a powerful processor and the S Pen that lets you make notes on the go. The S range is Samsung’s most popular phone range, but the Note offers an even more high-end experience.

Is Samsung better than iPhone?

Both brands are fantastic in their own ways, with the iPhone being one of the world’s most coveted range of devices and Samsung being on the cutting edge of technology. It all comes down to your personal preference.