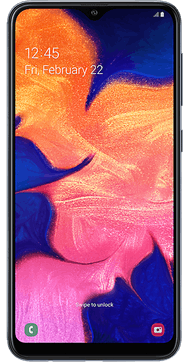 Samsung Galaxy A10 deals: about the hardware

The Samsung Galaxy A10 is a low-cost smartphone that features an HD+ display that’s been given an Infinity-V design, while the main chassis of the phone is made from plastic. The ‘v’ shape is there thanks to a notch that houses a front-facing camera. It’s a 6.2-inch 720 x 1520 IPS LCD screen.

This Android smartphone is powered with an Exynos 7885 Processor Octa-Core which is built for mid-range phones. It runs with Android 10 (updated from Android 9.0) with One UI 2.0, Samsung’s simplified software overlay. Some stand-out features include the fact that the phone automatically shifts into Night Mode in the evenings to encourage a better night of sleep, an all-day battery and face unlock.

How does the Samsung Galaxy A10 measure up when placed next to the flagship Samsung Galaxy S10 (the A10 was released in February 2019, the current flagship is now the Samsung Galaxy S20 series)? The two phones are hundreds of pounds apart in price, though at first glance they appear pretty similar. The S10’s screen is 6.1 inches in comparison to the A10’s 6.2 inches, and they both have a similarly sleek design.

The screen quality is far superior on the Samsung Galaxy S10, however, as is the processor that is in the flagship device. The S10’s camera is also superior. It comes with a 12MP + 12MP + 16MP triple lens camera, along with an ultrasonic fingerprint scanner and wireless power sharing. It has additional sensors onboard like a gyroscope and barometer, and internal memory goes up to 128GB in comparison to the A10’s 32GB.

The Samsung Galaxy A10 is part of the A-range of smartphones which is the midrange for Samsung. This handset sits at the bottom of this range, so the price of the smartphone means that it has reduced features - both hardware and software - to lower the price.

The Samsung Galaxy A10 offers 32GB of internal storage, but there’s also an SD card slot so you can store additional media. It even comes with a 32GB Micro SD Card in the box to get you started.

How much memory does my Samsung A10 need?

There’s only one option when it comes to internal storage. With 32GB, the Samsung Galaxy A10 is on the low side when it comes to internal storage. This smaller storage capacity does prove why the A10 is one of the more affordable Samsung phones. This type of storage limits you to running essential apps and storing smaller music, movie and photo libraries.

While it’s a reasonable amount for most everyday users, particularly if you back it up with cloud storage, you will want to look at purchasing an additional Micro SD card, although there is a 32GB card in the box which is a bonus. The Samsung Galaxy A10 comes with a micro SD camera slot that is compatible with cards up to 512GB.

Operating with a powerful 3,400mAh battery, the Samsung Galaxy A10 will keep you connected throughout the whole day. Whether you’re enjoying a marathon gaming session or all-night texting session with friends, you’re unlikely to drop out.

Given the lower processing power, and a screen that is only LCD, a battery of this size does mean that the battery is one of the biggest draws for the Samsung Galaxy A10.

Although it features a large screen, the Samsung Galaxy A10’s design feels rather compact and sleek. It’s finished with a choice of glossy colours:

The Samsung Galaxy A10 offers basic camera functionality that should deliver decent photos but the camera specs are in keeping with the price of the phone. For a start, there is just a single-lens 13MP rear camera on the rear and a 5MP front camera for selfies - again, these are acceptable but if you are looking for a top-notch camera phone, this is not for you.

Samsung has added a fun twist to the cameras in the software, with the addition of things like AR Stickers, stamps and a variety of filters.

Here’s a closer look at the camera specs:

Samsung uses facial recognition to keep your Galaxy A10 safe but it only uses 2D technology so isn’t as secure as phones that use 3D facial scanning. There is no finger-print reader on the device, but you can also keep your phone locked with pin and pattern security.

Released in February 2019, the Samsung Galaxy A10 is still widely available. Samsung phones are available from most major operators, meaning you’ll have plenty of choice when it comes to contracts. You can currently purchase on a pay monthly contract any of the following providers:

What are the best Samsung A10 deals?

When you’re comparing Samsung Galaxy A10 deals from the operators mentioned above, there are a few things to think about. Most deals are low in cost, because the phone falls towards the budget end of the spectrum. This frees you up to look at additional factors, including the following:

If you have the money to pay for your A10 out of pocket, you could consider choosing a pay as you go or SIM-free plan that covers the cost of data and minutes alone. Otherwise, you’ll need to look at the contract length for any pay monthly deals. In most cases, these will be 24 months but occasionally you’ll find 12, 36, or even 48-month contracts. It can be difficult to switch phones mid-contract unless you have a good reason.

Inclusive data can range from 2GB per month to 30GB. Think about how you use your phone. Do you like to stream HD video while you’re away from home? Do you stick primarily to home broadband? This will have an impact on the best plan for you.

You can benefit from additional benefits along with your deal, whether it’s a free BritBox or Now TV entertainment pass or discounted rates for live events. If you bundle your mobile services with home broadband and TV, you’re more likely to get some additional perks thrown into the deal.

Do you plan to use your phone abroad? Consider whether or not the operator includes international roaming plans as part of the deal. The same applies if you frequently phone friends and family living abroad; would calls to that country be supported in your contract?

Finally, not all networks are equal. Find out what’s available in your area with this postcode checker and then choose an operator that can provide the most reliable signal and network coverage.

How expensive are Samsung Galaxy A10 deals?

You can purchase the Samsung Galaxy A10 for as little as £139, making this an affordable choice as a first phone or everyday all-rounder.

Pay monthly Samsung Galaxy A10 contracts start from £17.99 per month, with zero upfront costs to get your phone. Contract lengths vary, but most are 24 months in length.

One area to pay attention to is data. With the cheapest monthly contracts, you may only have 2GB of data included, which is fine if you primarily use your home broadband or free Wi-Fi networks. However, if you want more data included you can purchase bundles, or go for a contract that includes 30GB or more.

Samsung Galaxy A10 on pay monthly

Prefer the freedom to pay as you go? As we’ve mentioned above, the Samsung Galaxy A10 is available for purchase at just £139. From there, you can tack on monthly data plans at very low rates, simply paying for the minutes and data as you need them.

What about the Galaxy A10S?

The Samsung Galaxy A10S has a lot in common with the original A10, but it has a few little tweaks to set it apart. Both share the Infinity-V display and 6.2-inch screen size. It’s an upgraded version with the addition of a rear fingerprint sensor and 4,000mAh battery. The camera also gets an upgrade on the A10S with a dual-camera setup. The 13MP main camera has an additional 2MP depth sensor, while the front selfie camera is 8MP rather than 5MP.

Does the Samsung Galaxy A10 support fast charging?

No, unlike a lot of more expensive Samsung phones, the A10 doesn’t support fast charging. If you want this feature, you can upgrade to the Galaxy A30 or A50 models. The good news is that the A10 does hold its charge throughout a day of typical use.

Is the A10 waterproof?

The A10 isn’t rated as water-resistant. Although it may stand up to the occasional raindrop or splash, users should take care to keep it out of water for prolonged periods of time.

Who should buy the Samsung Galaxy A10?

This is a good starter phone for everyday use. If you primarily use your phone for calls, texting, and basic internet, the A10 is a stylish and affordable option. Its camera is perfectly functional and comes with some fun filters, as well as features like the Live Stickers that use facial recognition.

Who shouldn’t buy the Samsung Galaxy A10?

If you’re a heavier phone user who needs your device for storing large media files or memory-rich apps, then this phone may not be the best choice. Its internal storage is only 32GB, and although this can be supplemented with an SD Card, it might be more convenient to choose a model with higher capacity. Serious photographers will want a phone with a better camera.

No, this phone isn’t suitable for use with a 5G network. If 5G is available in your area, you can turn to the Galaxy S10 5G instead, which is specifically designed to work with the next generation network.