The OnePlus 6T isn’t the newest model available but still packs a punch for many types of user. You’ll find OnePlus 6T contracts from plenty of major providers, as well as SIM-free handsets available to buy outright. 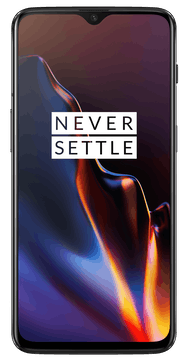 OnePlus 6T: About the hardware

The 6T runs using Android 9 Pie with OnePlus’ OxygenOS interface interlaced over this for a really user-friendly experience. It’s built with a premium 6.41-inch screen and smooth, fluid AMOLED display. The phone uses a Snapdragon 845 processor with a choice of 6GB or 8GB RAM.

With a premium glass design and clean software, the OnePlus 6T is an improvement on the original OnePlus 6. It does differ from the newer, sleeker OnePlus 7 Pro in several ways, some of which are outlined above.

Most notably, it doesn’t offer the pop-up selfie camera and 90Hz display that you’ll find on the newer model. The OnePlus 7 Pro now comes in a 5G version as well, which is a good option if you’re interested in the latest 5G mobile deals.

Like most other OnePlus phones, the 6T comes in 128GB or 256GB variants. These two options are usually suitable for the average user, though creatives who store large files on their phones might need a little more.

How much memory does my OnePlus 6T need?

With 128GB and 256GB variants available, which model is right for you? It all depends on how you tend to use your smartphone.

128GB for everyday use

256GB for gaming, streaming and storage

One thing to note is that the OnePlus 6T doesn’t have a 512GB configuration. But most users won’t need that much memory, making this a great choice for most people.

You’re unlikely to run out of power throughout the course of the day. The battery lasts for several hours, with a quick charge function to power back up before you head out the door. However, there’s no wireless charging function included. You’ll need to plug your phone in to take advantage of the fast wired charging.

These were the only two colours available at launch, but OnePlus has since added a third Thunder Purple option along with a limited-edition McLaren collaboration in a signature shade of vibrant orange.

You’ll find two cameras on the back of the 6T, along with a front-facing 16MP selfie camera. These are the same specs as the earlier OnePlus 6 model, but the software behind them has changed. Here are a few of the features you’ll find:

With HDR tech to showcase differences in lighting, you can expect sharp detailing without too much fuss.

The phone’s secured with an in-screen fingerprint scanner to control apps and purchases. So you can unlock your phone with a single touch or swipe. For added security, you can lock it with a password.

There’s also a Face Unlock feature built into the device, which combined with the fingerprint scanner offers a near-instant unlocking.

As a flagship phone, the OnePlus 6T was widely available upon its release back in 2018. Some of the main providers include:

Since then, several new OnePlus phones have been released, which makes it a bit trickier to source a new 6T. Although the phone’s still available if you’re willing to shop around, it has widely sold out (including on the OnePlus website). Currently, EE offers pay-monthly contracts with the 6T included.

What are the best OnePlus 6T deals in the UK?

The best OnePlus 6T deals for you will depend on the type of plan you’re looking for. Because the phone’s not a brand-new design, you can find some cheap mobile phone deals or save a bundle by choosing a gently used SIM-free device. However, there’s more to consider than cost alone. Here’s what to look at when you’re comparing options:

If you’re thinking about bundling your mobile phone service with broadband and TV packages, you could save on all three.

How expensive is the OnePlus 6T?

This is a very reasonably priced phone for all the technology packed into it. When shopping around for OnePlus 6T deals UK, you’ll find contracts priced around £30 per month or less, or you can purchase it outright starting from £499 (128GB) or £579 (256GB). Used models are selling for around £300, and you can expect this to go down in the future as newer OnePlus phones are released. The technology is still impressive though, so at that price, the 6T is a real bargain.

One thing to keep in mind when you’re comparing pay monthly deals is data limits. To make the most of a phone like the 6T, you’ll want plenty of data for HD video streaming and gameplay. Look for OnePlus 6T contract deals that include unlimited data and a decent 4G connection, unless you plan to use it primarily at home with Wi-Fi.

As we’ve mentioned above, many providers are no longer offering the 6T or have sold out of this model. However, EE currently offers pay monthly OnePlus 6T contracts, with prices dependent on data, storage and contract length. Most are 24 months in length, and come with added perks like free data roaming within Europe and subscription services to Apple Music and BritBox.

OnePlus 6T on pay as you go

You don’t have to lock yourself into a contract if you’d prefer a pay-as-you-go deal. Find SIM-free OnePlus 6T phones from sources like Amazon. And if you want to save a bit of cash, you can look for refurbished or gently used models.

The base price was originally £499 for the 128GB/6GB configuration, or £579 for the 256GB/8GB design. New 6Ts can be tricky to track down at the moment, so you’ll pay even less if you go for a refurbished handset.

SIM-only deals start at very low prices, around £5 per month with more flexibility than pay-monthly contracts. By opting for pay as you go, you have the freedom to switch to a different operator if you see a better deal.

What about the OnePlus 6T McLaren Edition?

OnePlus teamed up with McLaren to release an eye-catching McLaren edition of the popular 6T. It shares most of the same features with the original 6T, but there are a few tiny differences. This includes more RAM, as well as faster charging capabilities. The dimensions and screen design are the same, but the McLaren Edition offers a signature ‘Papaya Orange’ at the bottom of the handset. This distinctive colour travels up the sides and fades to black at the top. You’ll also spot a McLaren logo at the rear of the phone, which is a nice bonus for car lovers.

What are the pros and cons of the OnePlus 6T?

The 6T is packed with powerful technology, and it’s quite cost-effective as well. Fast wired charging, an in-screen fingerprint scanner, and a good camera are all major benefits. Built-in storage goes up to 256GB, which is more than sufficient for most users.

However, the phone might not be for everyone. It doesn’t offer wireless charging and there’s no 3.55m headphone jack. The OnePlus 6T is also not waterproof like some other higher-end smartphones. It doesn’t come with an official IP rating, though it does say that there is some water resistance with foam in the ports to prevent water damage with quick exposure.

What customisation options are there?

If you love to make your phone your very own, you’ll like the OnePlus 6T. It’s built with the OnePlus-designed OxygenOS skin over Android 9 Pie, giving you a choice between OnePlus’ swipe gestures or the usual Android navigation system. You can swap into a choice of different modes, including a popular gaming mode, adjusting brightness, notifications, and background design as you wish.