The iPhone X has been a fantastic phone since it was first released in 2017. And now that it’s not the latest iPhone, it’s a lot more affordable than it used to be. So instead of coughing up on an iPhone 11, why not consider going for an iPhone X? 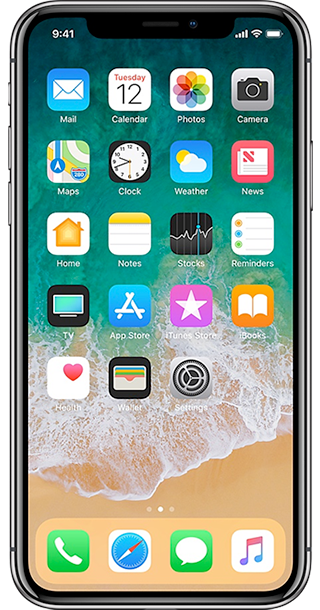 iPhone X: About the hardware

The iPhone X, sometimes also called the iPhone 10, slots neatly between the iPhone 8 and the iPhone 11. And while it’s not the latest and greatest of Apple’s creations, it’s still a very impressive phone. For daily use, you won’t be disappointed in the iPhone X, even if you’d originally got your heart set on the more modern 11.

The iPhone X was discontinued in 2018. That’s not to say there aren’t iPhone X deals around, but with each passing year and each new model, the chance of getting a brand new iPhone X decreases. So don’t be surprised if the best you can find is ‘like new’ and pre-owned models.

The iPhone X gives you two storage options: 64GB and 256GB. Compared to models that have offered a happy medium of 128GB, these options do tend to rest at either end of the spectrum.

How much memory does my iPhone X need?

Generally speaking, if you’re not using your iPhone as a hub of creative work and editing (in which case you might want to look at the iPhone 11 Pro Max) the 256GB will be perfectly sufficient. If you’re the sort of organised user who stays on top of file management and doesn’t clog up their phone, you may get by just fine with the smaller 64GB capacity.

The iPhone X battery is said to last two hours longer than the iPhone 7. Given the high quality display, this battery should see you solidly through the day, though keep in mind that battery life varies a lot from user to user.

The iPhone X comes in a very small selection of colours compared to the rainbow offered by the iPhone 11. Of course, with so many cases and accessories available, you shouldn’t really consider this an issue when it comes to picking a phone. The iPhone X is available in:

Being an older model, you may not have much choice on the colour you get, though both shades are perfectly neutral.

The iPhone X comes with the following cameras:

Along with its trio of cameras come extra improvements on older iPhones to create some truly impressive photography:

The super retina display shows off your images in fantastic clarity too.

The iPhone X does away with fingerprint ID and uses secure facial recognition instead, which has been a leading security feature of the iPhones ever since.

What are the best iPhone X deals?

As an older model, the iPhone X falls into cheerfully affordable territory compared to newer, shinier iPhones. Still, price is not all, when you are looking for the best iPhone X deal, consider the whole package, like:

How expensive is the iPhone X?

As a model that’s both older and discontinued, you can expect the iPhone X price to continue dropping. It’s not quite as cheap as the iPhone 8, but it’s certainly more affordable than the latest 11.

Pay monthly is a great option for any phone, as it spreads the cost of your handset and data out over a long period. However, the iPhone X may not be easy to find with these plans. Not only is it older, it’s also been discontinued. The following networks do still offer a pay monthly plan though only through third-party suppliers:

iPhone X on pay as you go

Your chances of getting an iPhone X on pay as you go are slightly higher, though still limited. You’re also not likely to get a brand new handset this way.

Almost all iPhone X deals are for SIM-free models. The iPhone X is old stock, after all, and providers will be placing priorities elsewhere when it comes to contracts. You can get a SIM-free iPhone X from retailers such as Amazon and Argos. A new phone, if you manage to find one, will be around £600, whereas a used one can go for as little as £350.

As pre-owned is the name of the game with this phone, you should be extra careful in checking the condition. Try to go with a mobile provider if you can. giffgaff, for example, sometimes gets older models back in stock due to customers trading them in. By going with a reputable retailer or network, you can question the overall condition of the phone. Sellers on Amazon may not be so forthcoming with anything more detailed than “Used - very good”.

What about the iPhone XR and XS?

The iPhone XR and the iPhone XS are more recent models, and the XR at least hasn’t been discontinued, so you can still find a good range of deals on them. The XS is a minor step up from the X, while the XR is something of a revamp of the X in that it’s a little faster, a little sleeker and comes in more colours. If an iPhone X is proving impossible to find, you should find the XR much easier to get your hands on, and it’s a great phone too.

What does it mean when it says the iPhone X is discontinued?

Discontinued phones are no longer being made by Apple, which means there are no more units being shipped to providers. So, with the exception of pre-owned models, there are no more new ones to sell. This is how old models are phased out and newer versions brought in.

Yes, so long as they have been refurbished correctly, they should be just as secure as a box fresh phone. Pre-owned phones are given a factory reset, which means they’re stripped of all prior data and returned to how they were when they originally shipped from the factory. This is true for information, apps and files at least. Some pre-owned phones will run slower, have slightly diminished battery performance or show cosmetic wear and tear.

Buying from eBay may land you a great deal, but you don’t know what the owner means by refurb. It may mean just deleting their apps. If you can, buy direct from the manufacturer. This often means the phone has been given a little TLC like a new battery or case.

Given that it is no longer being made so deals and support are running low on the ground, probably not. Instead, you should try the iPhone XR or even the iPhone 8. The iPhone 8 has also been discontinued, but only recently, so it will probably take at least another Apple release for its remaining units to become redundant. Until then, you should be able to get a new handset and a great deal quite easily.