Apple iPhones have been recognised as first-rate phones for a long time, and newer models don’t make the company’s previous versions any less impressive. It’s an argument that the iPhone 7 makes well. 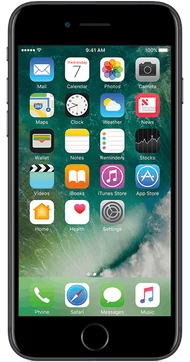 iPhone 7: About the hardware

While the iPhone 7 was originally released four years ago, in 2016, it still boasts decent specs by today’s standards.

The iPhone 7 comes with two storage options, both of which have become fairly standard on modern iPhones: 32GB and 128GB. There is no 64GB option like on the iPhone XS.

How much memory does my iPhone 7 need?

32GB is ideal for light users who:

128GB is ideal for most users, including anyone who:

Opting for more storage can add quite a lot to the price, so choose carefully. Depending on the sort of user you are, you may get by quite well with 32GB. Think about which apps you use and how you use them – even smaller apps like WhatsApp will grow if you allow it to cache all the media you have viewed on the platform (although you can always disable this function).

The iPhone 7’s battery should last two hours longer than the iPhone 6s’s. Not that the iPhone 6s had a poor battery. Battery life varies hugely from user to user, but if battery performance is crucial to you, the iPhone 7 Plus offers an extra boost.

The iPhone 7 doesn’t come in many colours, but they all have a premium appearance. The choices are

The iPhone 7 has the following cameras:

It also comes with extra features to ensure you get great results:

The iPhone 7 uses Touch ID to unlock your phone with a fingerprint.

The iPhone 7 is more keenly priced than Apple’s latest phones, but it’s still in the premium price bracket. With that in mind, pay careful attention to the following before deciding which iPhone deal is best for you:

How expensive is the iPhone 7?

Although it has dropped in price, it’s still an excellent phone and you should expect to pay accordingly.

A handset-only deal will cost around £300. Pay-monthly can vary hugely depending on the contract’s length and any extras, but £30 a month is a likely starting point.

Pay-monthly plans for the iPhone 7 are still widely available from all the following networks:

Pay-as-you-go options are also available, though you may find some of these plans feature refurbished models. The following providers stock pay-as-you-go iPhone 7s:

You can expect to pay about £300 for a pay-as-you-go handset. Many networks also require you to pay for a SIM card top-up.

Is the iPhone 7 discontinued?

Yes. Discontinued phones are devices that are no longer being made. Very old models may no longer be supported, which means you don’t receive updates. However, Apple only recently discontinued the iPhone 7, so it’s still supported and widely available.

Can I get a refurbished iPhone 7?

Yes, of course. Refurbished phones are a great way to save money on a premium handset. Leading networks like EE and Vodafone limit refurbished models to like-new handsets. These are phones that have been purchased but returned within 14 days, meaning they’re as close to box-fresh as possible.

Only buy refurbished phones from a reputable network. In general, used phones offered elsewhere haven’t been professionally refurbished, meaning there could be all sorts of issues with the device. Even if it seems to be running smoothly, a factory reset won’t serve to remove online accounts, so you may end up locked out of a lot of features.

Is the iPhone 7 the best older iPhone?

It’s definitely a strong contender. iPhones from the iPhone 6s onwards can match many modern handsets. Don’t feel obliged to cough up for the latest release (or even the model before that), because the technology that underpins all iPhones won’t let you down.

Which is the best network for iPhones?

The iPhone is a hugely popular phone, so you’ll be hard-pressed to find a network that doesn’t stock it. At present, the iPhone 7 is still widely available, which means you should be able to secure a deal with the network of your choice. It has been discontinued, though, so you should aim to pick one up sooner rather than later – once the current stock is sold out, it will be gone for good.