With its incredible camera, slick design and powerful processor, the Huawei P30 is a great choice for anyone looking for a smartphone that ticks all the boxes. It may not be the most recent handset, but it’s still a leading contender for photographers. 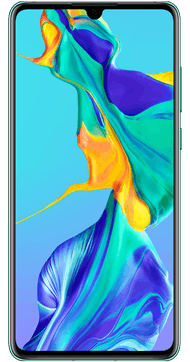 Huawei P30: About the hardware

The Huawei P30 has an intuitive, user-friendly operating system. Coupled with the phone’s powerful RAM, battery life and processing power, it provides a smooth, flawless performance – even during demanding tasks.

The Huawei P30 offers 128GB of storage space, which is standard in most newer smartphones. This will allow you to store about 33,000 photos or 26,000 songs - more than enough for the average user. If you need more, you might want to take a look at the Huawei P30 Pro, which offers 256GB and 512GB models in addition to its 128GB version.

While it doesn’t boast wireless charging, the Huawei P30 does benefit from Huawei’s excellent SuperCharge technology. The phone comes with a SuperCharge charger that’s designed to take your phone from 0% to 100% in one hour.

The Huawei P30 Pro outperforms the standard edition, but both are a cut above the competition.

The Huawei P30 is available in five striking colours:

The Aurora and Breathing Crystal options offer perhaps the most unique and eye-catching colourways available for a smartphone, while even the plain colours boast an ultra-modern look.

There’s no guarantee that every shop and provider will have every colour available, so you may need to shop around for your preferred option.

For many, the quality of the camera is the deciding factor when choosing a new smartphone.

Huawei’s stellar cameras have always made its devices popular and the P30 enhances this reputation. Huawei has teamed up with camera giant Leica since its P9 model. Together, the two manufacturers have co-engineered the most robust, professional smartphone cameras on the market:

A new SuperSpectrum image sensor provides enhanced colour and unparalleled lighting capabilities. Alongside camera modes like Super HDR and Super Low Light, these features help you capture any moment in vivid detail – light or dark, near or far. The P30 takes some of the best night shots you’ll see from a smartphone and is second only to the P30 Pro.

This is one of the most impressive smartphone camera setups to date, but while it produces outstanding photos, the Huawei P30 can’t shoot 4K video at 60fps. This is a significant disadvantage considering it’s a feature available from many of Huawei’s competitors.

The Pro does include a time-of-flight sensor, periscope lens and a ground-breaking 50x digital zoom, though.

There’s a range of brilliant accessories to further enhance your experience with the P30 – like its industry-leading Huawei FreeBuds. Many of these accessories are available as add-ons when you purchase your phone from a mobile network provider. The P30 Pro’s accessories are even more impressive, with innovative products like its snorkelling case.

The P30 Pro offers a bigger screen, better camera and more RAM, as well as enhanced battery life and performance, but the standard P30 is still a premium phone worthy of consideration. The P30 Pro will attract those who want to take their photography further. We mean this literally: the 50x digital zoom is one of the main differences between the two cameras.

While you’d expect the Pro to outperform the standard P30 in every way, their screen resolutions are identical. This results in a lower pixel density on the Pro’s larger screen, making it less crisp than the P30’s display.

While it’s easy to assume that the Huawei P40 outperforms its predecessor, the newly released model may not be as appealing to consumers. This is because Huawei is banned from using Google apps on its newer models. The P40 operating system is still based on Android 10, but it can’t support any Google mobile services, including Google Play Store and Google Assistant. Those seeking a familiar interface and service set would be better off sticking with the P30.

The Huawei P30 is available from all major mobile network providers as part of a handset bundle, but choosing which provider to go with is not a decision you should rush. It’s easy to assume that the deal with the lowest price tag is the best offering, but with each provider including exclusive perks, features and add-ons, it’s important to look at exactly what you’re paying for and consider exactly what you need. Unless you’re opting for a handset-only deal, it’s important to consider the following when deciding where to purchase the Huawei P30:

How expensive is the Huawei P30?

The Huawei P30 is not the most expensive smartphone on the market, but it’s by no means the cheapest. The recent release of the Huawei P40, P40 Pro and P40 Pro+ means we can expect prices for the P30 models to gradually drop, and despite the release of the newer models, the P30 is still perfectly capable as a modern, functional smartphone. The camera alone makes the P30 worth its price, but if you’re not too concerned about taking professional-quality photos, then you’d be better off looking at cheaper options.

All major mobile networks offer the Huawei P30 on pay monthly fixed-term contracts, each of which comes bundled with an allowance of data, texts and minutes. In most cases, you’ll be able to purchase your Huawei P30 as part of one of these deals. This will allow you to split the cost of the device across your monthly bills. Some deals include an upfront cost, which then reduces the amount you have to pay month-by-month, but this is becoming less common.

Providers like Vodafone, Virgin Media and Sky Mobile will also have deals that offer discounts for those willing to subscribe to all their services: mobile, broadband and TV.

Given the phone’s high price tag, most networks are pushing P30 pay-monthly deals, but pay-as-you-go options are available with the following providers:

What is the best mobile network for the Huawei P30?

Because it doesn’t connect to 5G, the P30 can be used on any mobile network with 4G. Use a coverage checker to find the network offering the strongest 4G signal in your area.