The Huawei Mate 20 X 5G remains one of Huawei’s most attractive offerings. Announced in May 2019, it boasts 5G compatibility, the first Huawei smartphone to do so. 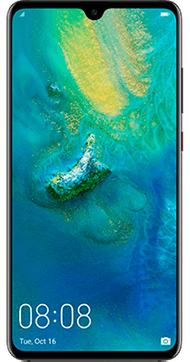 Huawei’s Mate 20 X 5G has quite a unique look compared to competitors. It’s available in just one colour, Emerald Green, and is constructed from glass and aluminium for a phone that feels as sleek as it looks.

Most notably, the Huawei Mate 20 X 5G is significantly bigger than the average smartphone, with a 7.2-inch screen. For some, this means all the more space to work and play, but for others, it may be a tad too big to be practical. A great phone is only really great if you can hold and use it comfortably – so the size of the Mate 20 X 5G may be enough to put some people off.

The OLED display with HDR 10 support is striking, while the Kirin 980 processor does all the heavy lifting behind the scenes to keep the phone operating smoothly and responding quickly. It’s integrated with Huawei SuperCool too; innovative tech that works to keep your phone cool and responsive even with the most intensive tasks and apps.

The design of the Huawei Mate 20 X 5G is roughly identical to the original Mate 20 X, aside from the change in colour and the removal of the 3.5mm headphone jack.

128GB is the norm for most smartphones these days, so 256GB should be plenty of space for most users. 256GB means you can download bigger apps without having to worry about running low on space too quickly. If that’s not enough for you, the Huawei Mate 20 X 5G allows expandable memory via NanoSD (purchased separately) for a further 256GB, so you could have a total of 512GB of storage on your phone.

While the Huawei Mate 20 X 5G has a smaller battery than the original Mate 20 X, it is still an extremely impressive, reliable battery that lasts longer than most major smartphones on the market today. The 4,200mAh battery is more than enough to see you through the day even with heavy use. In fact, a battery this size can last almost two full days before needing a booster, which is quite remarkable, especially when compared to competitor offerings.

To put it in perspective, the iPhone 11 features a 3,110mAh battery while the Samsung Galaxy S10 features a 3,400mAh battery, both of which can just about get you from morning to night. It is worth mentioning that using the 5G network does run through the battery a little quicker, so that will balance things out a bit; don’t expect the phone to survive more than a day if you’re constantly using 5G.

The original Mate 20 X had an outstanding 5,000mAh battery, so if you want even more power and you’re not too worried about 5G, then perhaps you’d be better off going for the older model. The Mate 20 X 5G also benefits from fast charging capability, coming with a 40W charger that can get you from zero to 100% in just one hour.

Unlike the Mate 20 and Mate 20 Pro, the Huawei Mate 20 X 5G does not support wireless charging.

Huawei’s partnership with Leica has resulted in some of the most impressive, professional-standard smartphone cameras we’ve ever seen. While the P series boasts the most remarkable cameras, the Mate series, including the Mate 20 X 5G, is no stranger to exceptional photography specs.

Together, these three lenses can shoot some stunning photos – whether tight macro shots, wide group photos, or super-focused portrait shots.

This is the same camera as on the Huawei Mate 20 Pro, but with some improvements like enhanced low light capabilities to match that of the Huawei P30 series.  It’s by no means the best camera you can get in a phone, but unless professional photography is your aim, this is a great, versatile camera that can capture your most precious moments in vivid detail. Being a Leica-engineered camera, it is still an excellent choice even if it’s not the absolute cream of the crop.

Meanwhile, the 5MP front camera includes a ‘beautify’ feature to enhance your selfies and make sure you always look your best.

The Huawei Mate 20 X 5G is a very sleek phone, but it faces one major significant setback for UK customers in particular.

Huawei has faced a lot of scrutiny in recent years over security and privacy concerns, leading to the US government’s banning of Huawei working with American companies. This meant that Huawei was no longer allowed to use Google’s apps and services, which includes Android, and this was a major setback for the Chinese manufacturer. Huawei has now had to push alternatives to Google’s apps and services that, while already prominent in China, have struggled to appeal to customers in the west.

The Huawei Mate 20 X 5G, however, is one of the last Huawei releases that is still allowed to make use of Google services, using the Android 9.0 Pie operating system and supported by the Google Play Store.

Huawei and the UK

Beyond the cease of Huawei’s relationship with Google and other US companies, recent developments within the UK government and growing political tensions between the UK and China have indicated that the UK will very soon ban Huawei from its growing 5G network.

As of mid-July 2020, no official announcement has been made, but one is due in the coming weeks and it is speculated that the UK will phase out Huawei’s equipment from its 5G network over the course of the next three years.

That may very well be enough to deter you from investing in the Huawei Mate 20 X 5G, especially considering the original Mate 20 X is essentially the same phone but cheaper and without 5G compatibility.

What are the best Huawei Mate 20 X 5G deals?

You can find the Huawei Mate 20 X 5G from a number of major network providers, including:

These are likely to offer the best value deals for the Huawei Mate 20 X 5G. Paying for it in monthly instalments can make it far less of a financial burden. Plus, pay monthly deals can offer a whole lot more than just data, texts, minutes and a phone.

The Huawei Mate 20 X 5G is a fantastic phone. It’s cheaper than major 5G flagships from competitors, while still offering pretty much everything you’d want from a modern smartphone. However, there are a lot of potential limitations due to Huawei’s ongoing dispute with the UK government, and seeing as this phone is a 5G update of an already existing model, you might be best going for the original Mate 20 X, which is cheaper.

What is the last Huawei to use Google?

As one of the last Huawei lines able to use Google Mobile Services, the Mate 20 family is a popular choice for those who still want to benefit from Huawei’s stellar cameras, exceptional batteries and innovative design, but don’t want to give up the apps and functionality that Android offers.

The major difference between the Mate 20 X and the Mate 20 X 5G is the inclusion of 5G functionality, as well as a smaller battery on the 5G version. With that in mind, if you don’t mind opting for an older option, the original Huawei Mate 20 X may be the wiser choice.

On the other hand, the 5G version allows 40W fast charging, which the original does not, and the 5G network would be significantly better than 4G, if Huawei users are able to make use of it.