Six of the world’s most famous landmarks have been given a green makeover and reimagined as environmentally friendly energy hubs.
Share this guide 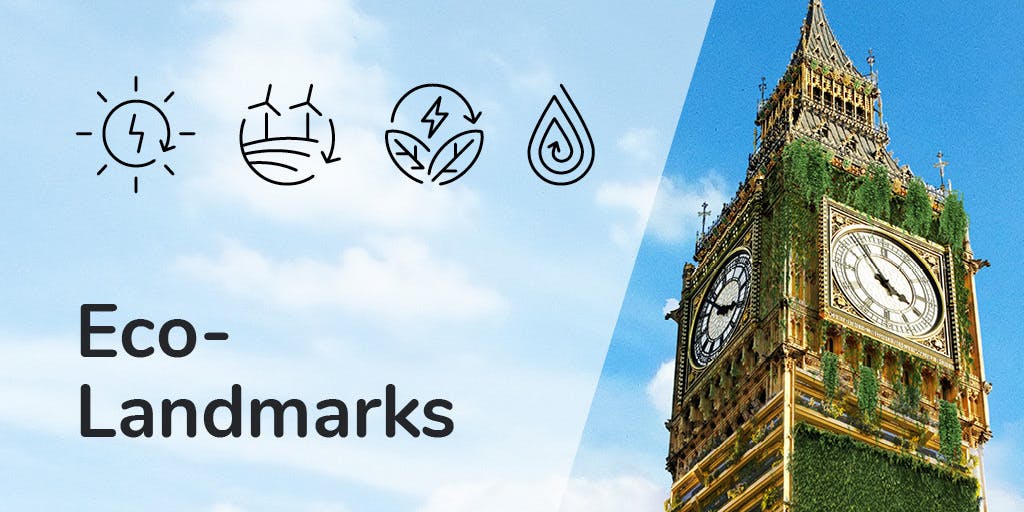 With global warming on the rise, we have reimagined six of the world’s most famous landmarks as green energy hubs using renewable energy — and the final results are stunning.

From the Eiffel Tower in Paris to the Taj Mahal in India, these new pictures show how harnessing renewable energy into these buildings can slow climate change, and help cause less pollution.

Global warming is having an increasingly noticeable effect on our planet and scientists warn that there will be irreversible damage to our environment if we don’t take action now to reduce carbon emissions.

Many famous landmarks have already embraced renewable energy or switched to more energy-efficient technology in an attempt to reduce their carbon footprint and help the environment.

We wanted to see if we could utilise existing spaces, and reimagine some of the world's most famous landmarks as green energy hubs using renewable energy.

Use our energy comparison to see if you could switch to a greener deal. 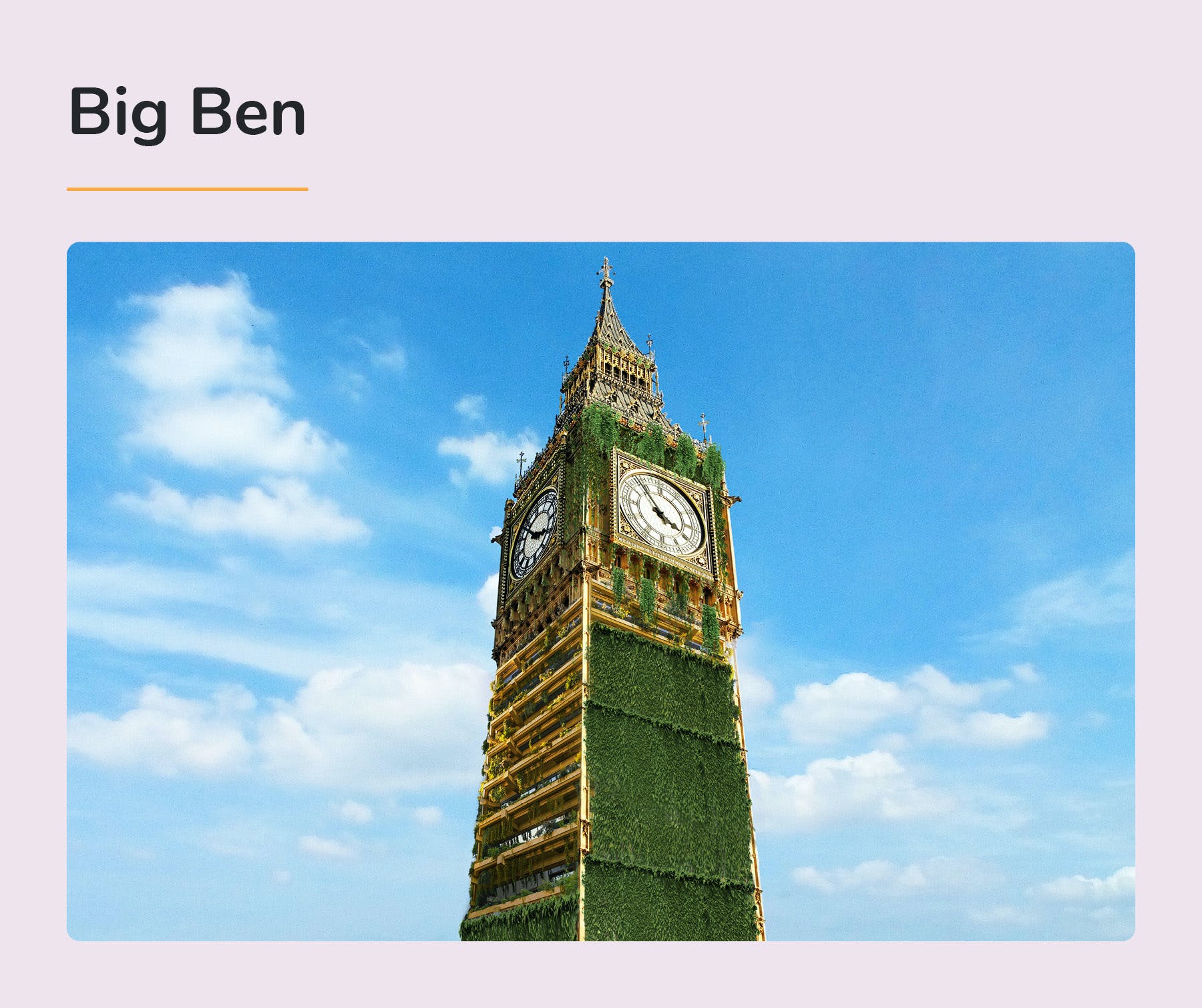 Big Ben commonly refers to both the clock building in London, though it’s actually the nickname of the bell inside it. It is one of the most iconic British landmarks and a must-see London attraction.

The production of electric power from biomass takes up the most space of all energy sources. With biomass crops taking up space, new spaces are needed to help harness this renewable energy.

An innovative solution could be to make Big Ben a living building, and harvest crops such as corn and soy to use for energy. Big Ben’s tower stands 316 feet (96 m) tall, so there is more than enough space to grow crops for biomass energy on this famous clocktower. 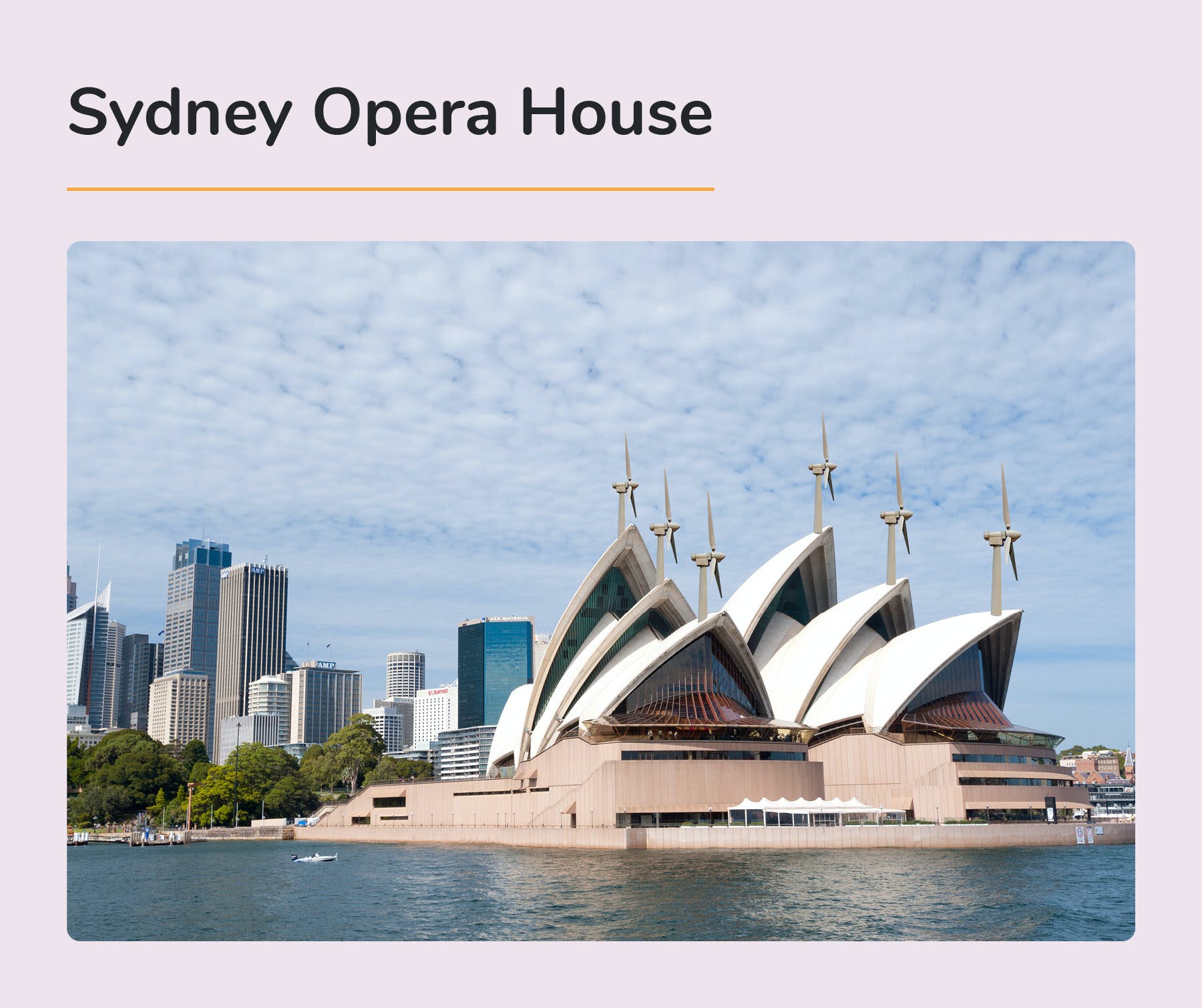 One of the most iconic buildings in the world, the Sydney Opera House is an architectural masterpiece. Located in Sydney Harbour in Australia, it is one of the 20th century's most famous and distinctive buildings.

The coastal location makes it perfect to capture the wind, and the average wind speed in Sydney harbour is 7.8 miles per hour.

A modern wind turbine begins to produce electricity when wind speed reaches 6-9 miles per hour (mph). It is reckoned that an average onshore wind turbine rated at 2.5 – 3 megawatts can produce more than 6 million kWh every year. 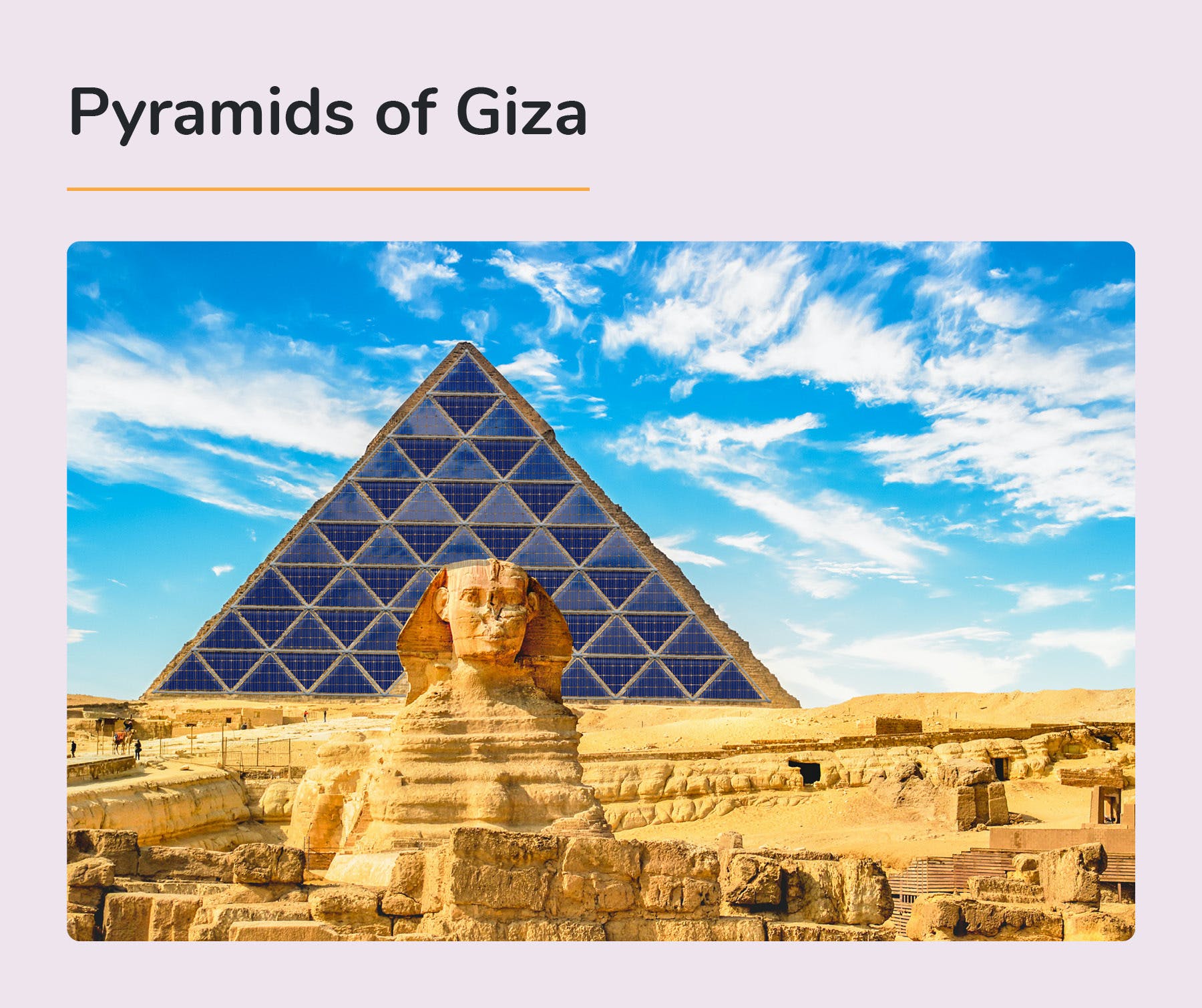 The Giza pyramids, which were built to be royal tombs for three different pharaohs, were erected on a rocky plateau on the west bank of the Nile in northern Egypt.

The middle pyramid, with the Sphinx in front of it, was built for a pharaoh called Khafre, the fourth of the eight kings of the 4th dynasty. The structure measures 707.75 feet (216 metres) on each side and was originally 471 feet (143 metres) high.

Solar panels usually produce between 250 and 400 Watts of power. Actual output will depend on factors like shading, orientation, and sun hours.

But looking at the average size of solar panels (approx 2m²), and the surface area of the east-facing side of the pyramid, we estimate it would generate up to 3,750,000 watts of energy every day. 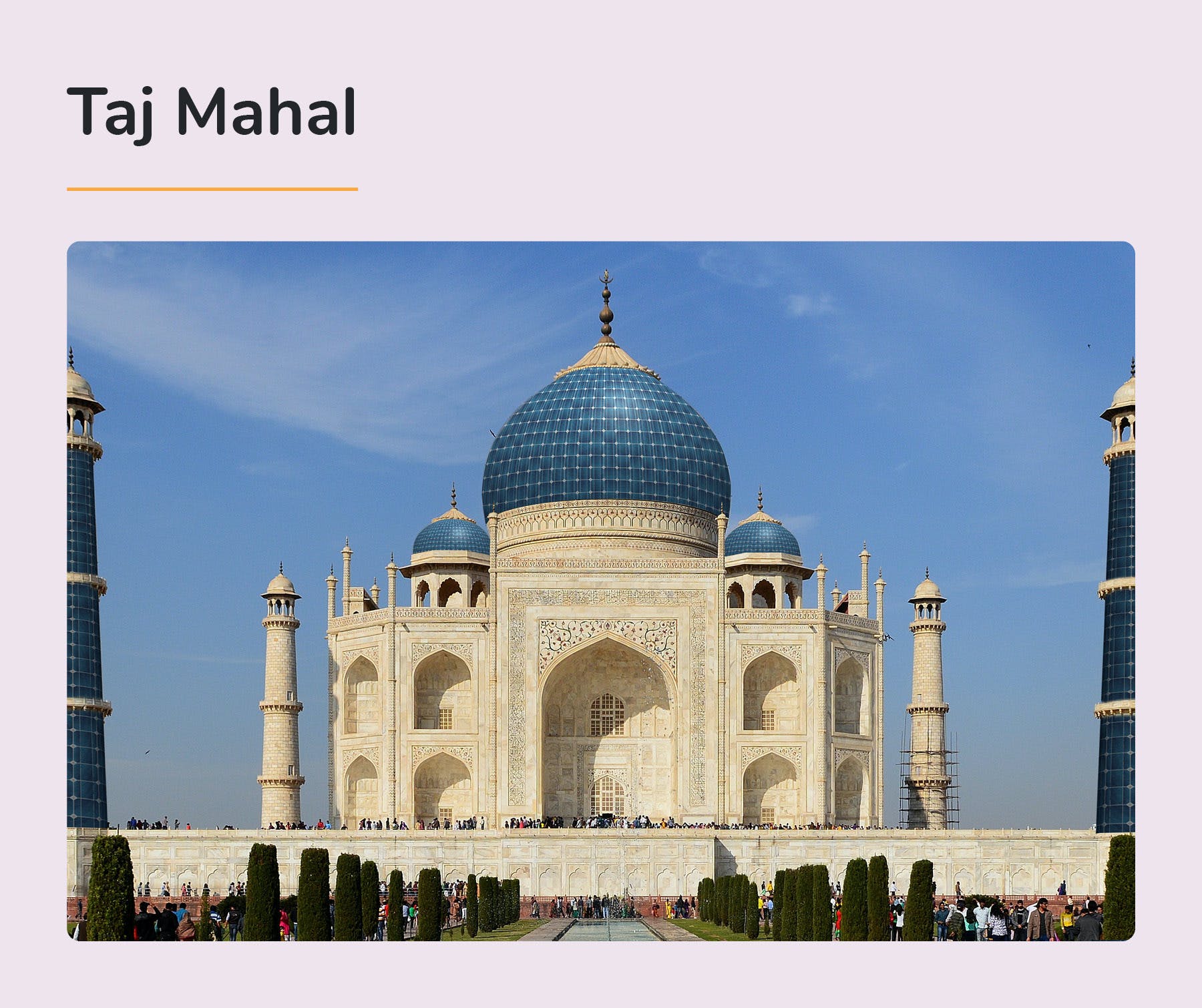 The Taj Mahal is a UNESCO World Heritage Site, and known as "the jewel of art in India”.

Constructed from white marble, the symmetry of the Taj Mahal is perfect and features a central onion dome, with four smaller ones surrounding it. The main dome is 115 feet tall, with the entire structure reaching just 561 feet. The dome is 17.70m in diameter for the height of the arc of 24.4m.

India has 300 sunny days a year and the Taj Mahal is well placed to soak up the solar energy. 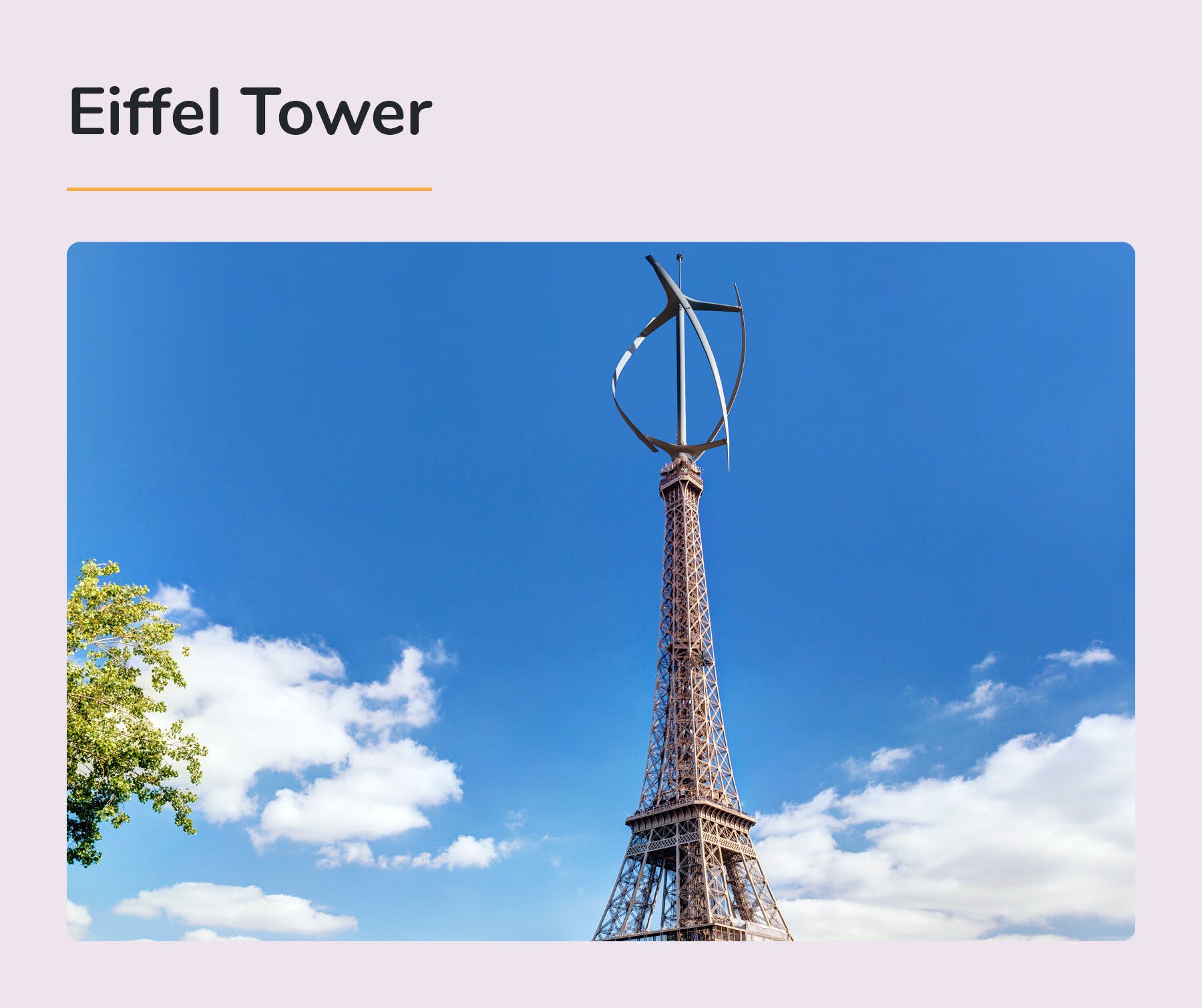 The Eiffel Tower is a world-famous Parisian landmark, and also a technological masterpiece in building-construction history.

The tower itself is 300 metres (984 feet) high, and it has already embraced renewable energy as part of a renovation by installing two vertical axis wind turbines. Located above the second level, the turbines will produce over 10,000kWh of electricity a year - enough to power the commercial areas on the Eiffel Tower's first floor.

So, we have taken this to the next level and added in a turbine at the tip of the tower to truly harness the wind power and amplify the tower’s renewable energy capabilities further. 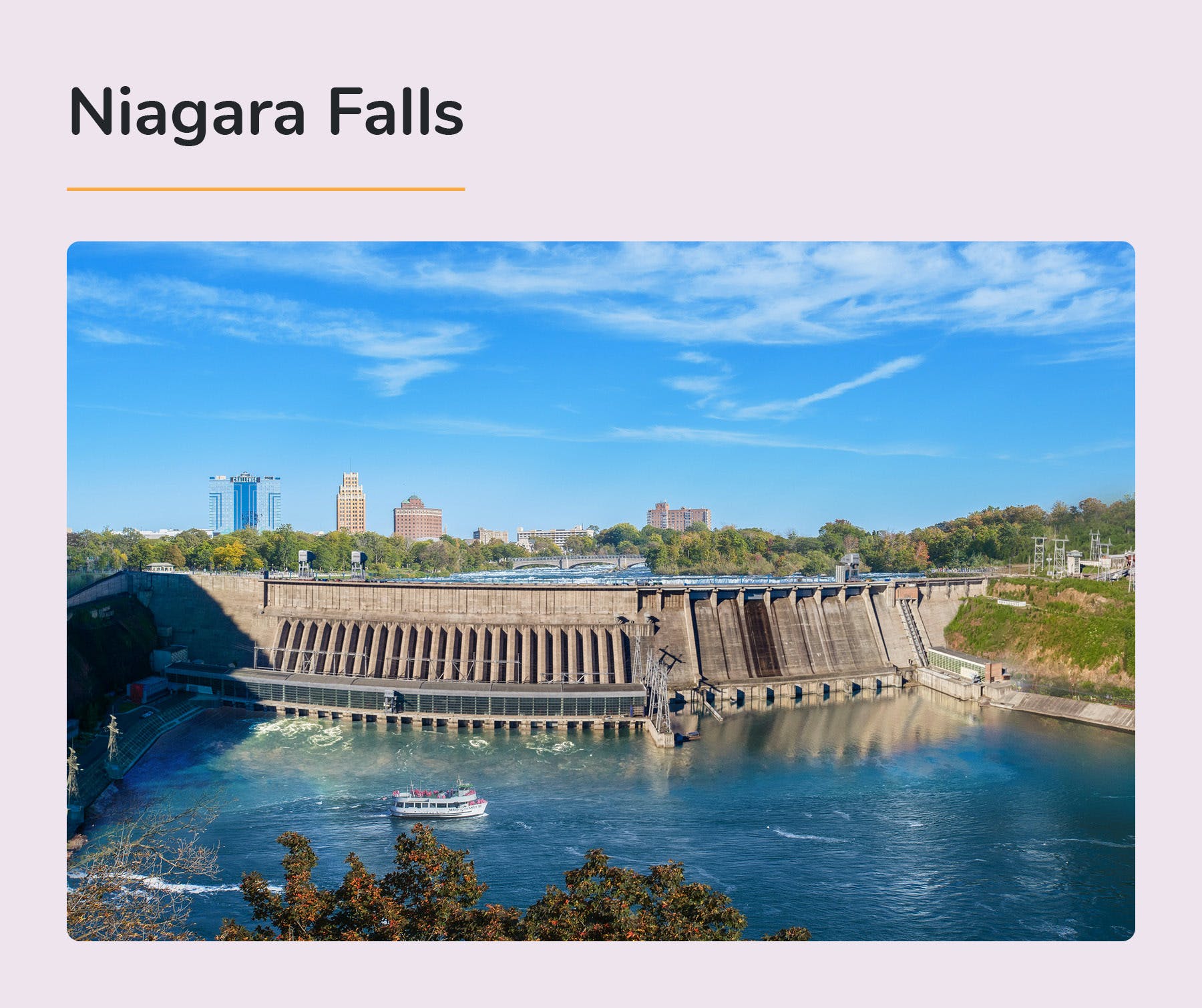 Niagara Falls spans the border between the province of Ontario in Canada and the state of New York in the United States. Horseshoe Falls at Niagara Falls is the most powerful waterfall in North America, measured by flow rate. With 3,160 tonnes (3,217,904 litres) of water flowing through every second, Niagara Falls can harness this water to generate energy.

Usually, there needs to be a drop of over 10 metres for a hydro turbine to be viable, which is no problem for Niagara Falls sitting over 50 metres high.

Taking the height and flow rate of Niagara Falls, if hydro energy was utilised, we estimate that 947,029,147 watts of energy could be produced every second.

These landmarks all have a certain geographical location, climate, size, height, and more to determine the best renewable energy type.

What is renewable energy?

Renewable energy comes from the earth’s natural resources and is generated from sustainable, 100% renewable sources like wind, sun, and water. Also known as Green Energy, it is better for the environment than traditional fossil fuels, and helps slow climate change and cause less pollution.

It’s called renewable because it can renew itself quickly, time and time again, and never runs out!

The main ways of generating renewable energy are wind and solar power.

But there are lots of other ways to create renewable energy, and many are used on a larger scale, like:

For more information on green energy, we’ve produced this green energy guide to help you save money on your energy bill.

Find out how much you can save on your energy by comparing current deals and switching here.