Shania Twain once said that someone having a car doesn’t impress her much, but is there any scientific merit to Twain’s claim?
Share this guide

Throughout the pandemic, the popularity of dating apps has risen to all-time highs, with stats from Tinder showing that singletons were making as many as 1 billion swipes per day in 2020-21.

But with so many people looking for free love on the free love freeway, the competition is fierce, with research finding that men could expect a match rate of just 9% and women a slightly more respectable one of 56% per 5,000 swipes.

In the face of such tough competition in the singles market, the hot-hatch match makers at money.co.uk understand that every opportunity to increase your kerb appeal counts. In our new Hot Wheels study, we’ve crunched the numbers to see if everyone’s favourite Canadian-cum-Country singer’s hypothesis holds true, or whether the right ride could land you in the carpool lane of love.

Between April and June of 2021, our Driving Attraction study created identical dating profiles across a variety of cities in the world, where the only difference was the make and model car featured on the profile.

In total we tested over 70 models of vehicles from 30 car brands, across multiple countries to get an average view on how car brands performed in comparison to our control profile which featured no car at all.

While we looked at a variety of genders, including non-binary, due to the low volume of data, we were only able to draw conclusions from ‘male’ and ‘female’ profiles. In both cases, our test profiles swiped and matched with all other genders.

Thousands of swipes (and several sore fingers later), here’s what we found.

Can a car increase your kerb appeal?

Contrary to the claims, our study found that having a car could actually boost your match making chances … provided that you have the right one. But not all vehicles are created equal and showing off the wrong one in your profile could leave you on the side of the road. 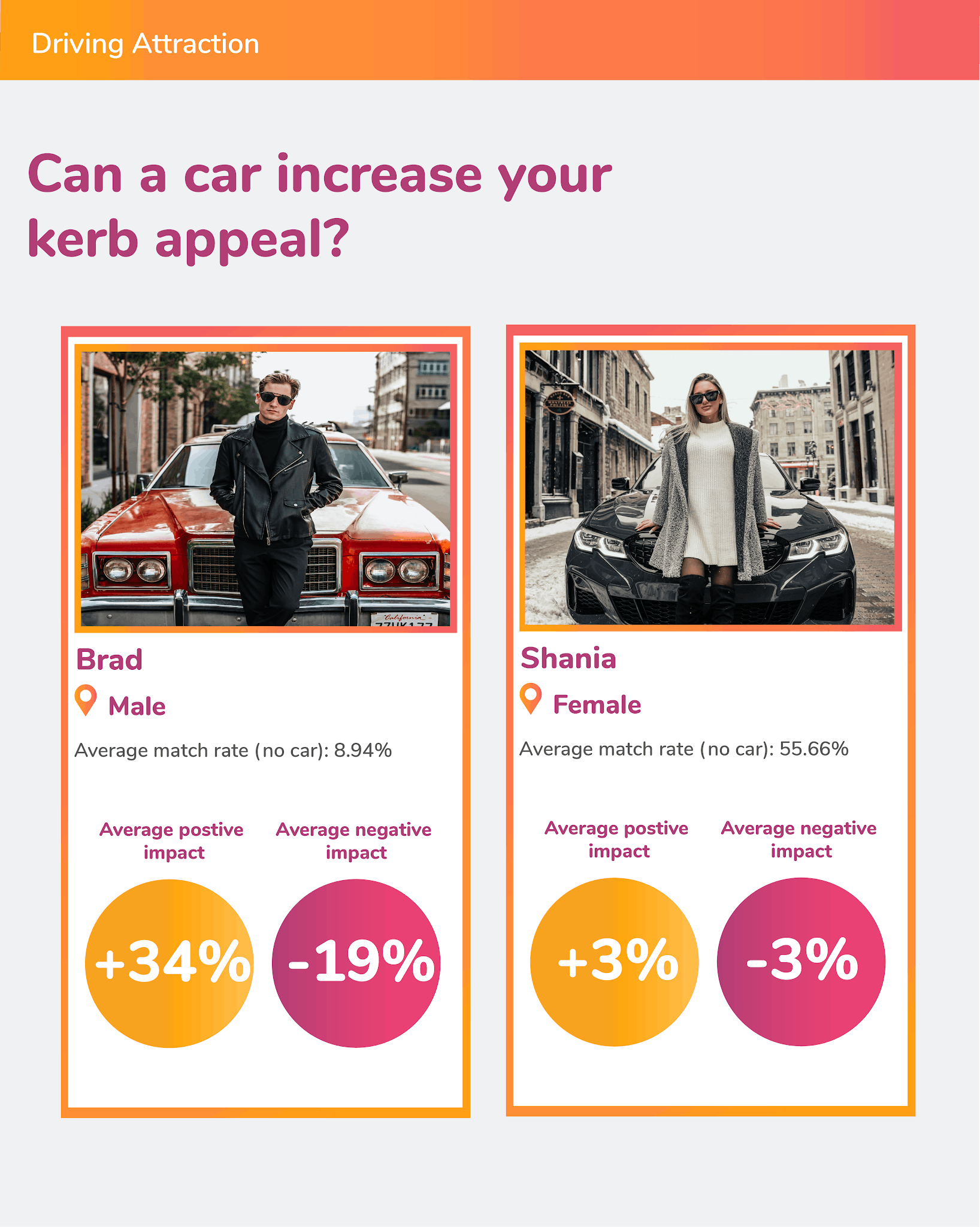 Overall, where featuring a car in a profile had a positive impact on match rates, there was an average increase in matches of 34% for male profiles, and a minor uplift of around 3% for female ones.

Across the board, introducing a car to a dating profile had a much more significant impact to male dating profiles, with some brands boosting match rates by up to 110%, compared to just 10% for women.

However, despite the potential benefit for men, there was also a higher risk involved, with profiles that featured less desired cars performing worse than ones that didn’t show a car at all. In our study we found that picking the wrong brand or model to showcase, could impact men’s chances at love by a staggering 77%, while women face a maximum faux-pax penalty of around 9%.

Want a date? Get a Tesla!

Our research found that when it comes to dating, there’s no better vehicular wingman than a Tesla, with profiles featuring a Tesla Model S getting up to 113% more matches than those with no car at all. 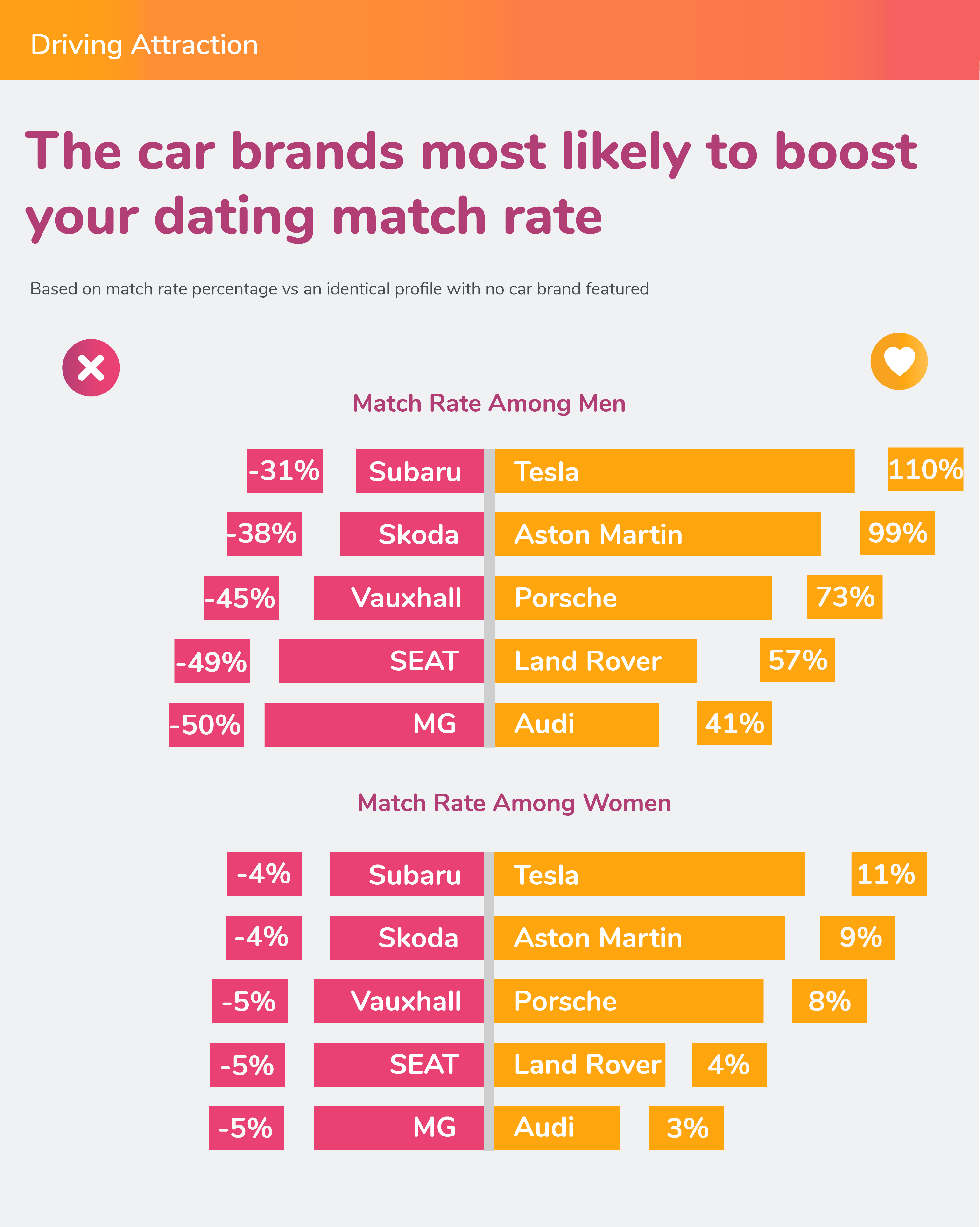 On average, owning a Model 3 or Model S from the Californian car manufacturer, could raise your curb appeal by up to 110%, pulling ahead of luxury car makers Land Rover (57%), Porsche (73%), and even Aston Martin (99%) to take pole position as the hottest car in town.

Overall, if you’re a man, Tesla, Aston Martin, Porsche, Land Rover and Audi were the most likely car brands to land you a date, with Mercedes and BMW narrowly missing out on the top five.

On the other end of the spectrum, Vauxhall, SEAT and MG owners would be better off ditching the car altogether, with the brands hurting their match rate by as much as 50%.

In total there were 17 car manufactures that negatively impacted the match rate of our test profiles, so if you’re single and in the market for a new vehicle, it might be worth check the list above, otherwise you could end up with just a sat nav for company.

For women, the story was the same, if less stark. Tesla again took the top spot, with an 11% uplift in matches when compared to no car at all.

In a surprise result, Toyota found its way into the women’s top 10 best performing brands, ahead of BMW and Volkswagen, taking the number 7 spot, 14 places higher than in the men’s list. This was largely thanks to the strong performance of the GT86 sports coupe, which sent potential matches’ pulses racing.

Our study found that overall, it was the badge not the model that mattered. For instance, while the Tesla Model S took the top spot, the more ‘affordable’ Model 3 produced a comparable swipe rate, despite being nearly £30,000 cheaper.

Range Rovers were the only 4x4’s to break into the top 10, with the top spots mostly reserved for German coupes and saloons from Porsche, Audi and BMW.

In a rare glimpse of hope for TT drivers, the much mocked coupe snagged the eighth spot in our list, as the most affordable car in the top 10, which unfortunately will likely only encourage them. 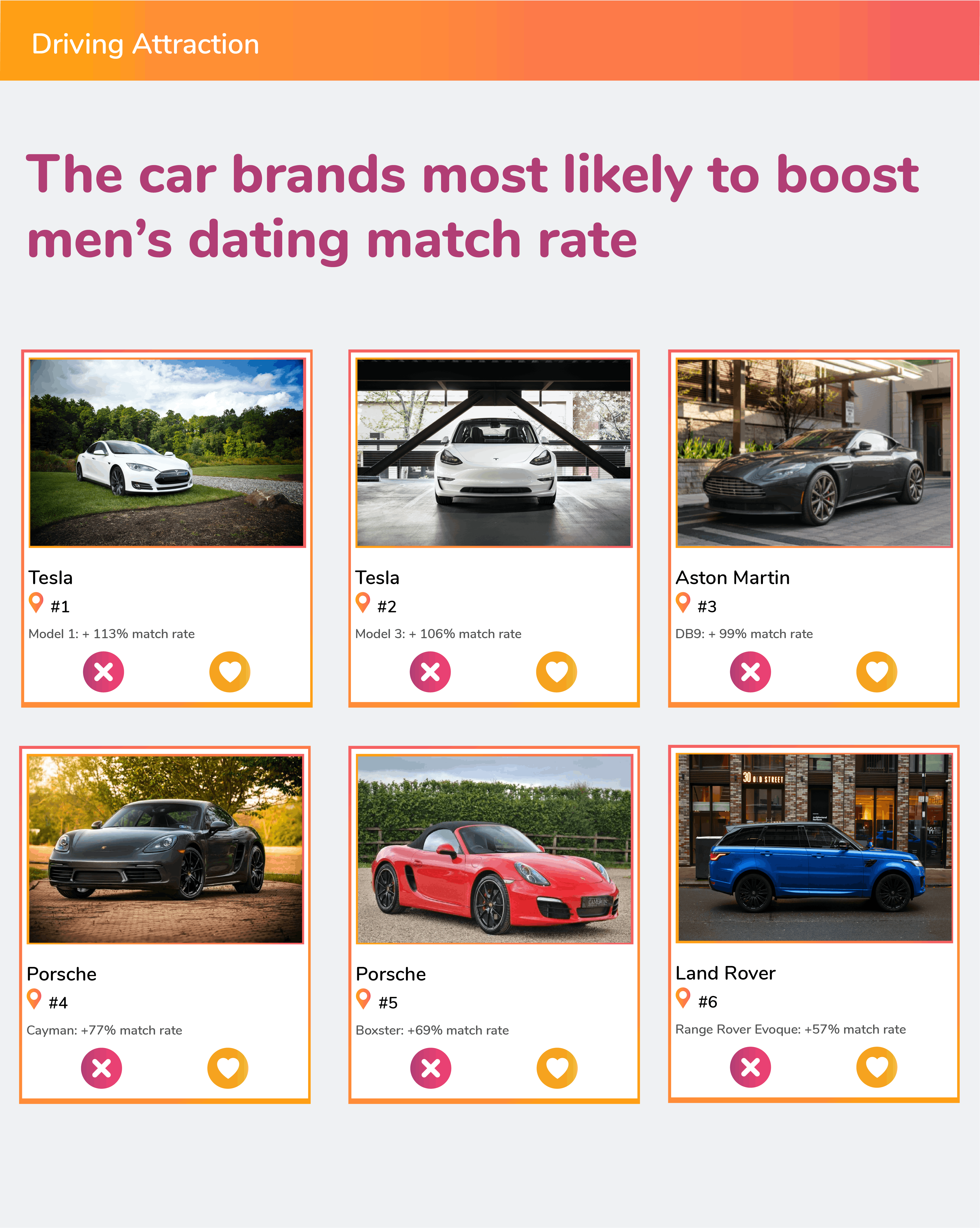 Outside of the top performing brands, choosing the right model was even more important, with match rates varying wildly between models. The starkest example of this was with BMW where owning an M4 or 3 Series would give male drivers a match boost by up to 34%, in comparison to driving an i3 which would actually hurt their chances by 15%, - 49% difference between the models.

While car model and brand had a lower impact on women’s swipe rates, there were some notable differences between the men’s and women’s best performing vehicles. Overall, across the top 15, sports cars featured more prominently for female daters, with cars like, the Toyota GT86, (+5%), Subaru BRZ (+4%), Ford Mustang (+3) all taking places near the top of the table.

Looking across all 70 cars in the study, key findings were:

So, there you have it, while having a nice car might not impress Shania Twain much, our study found that she is in the minority. Scientifically speaking, it’s pretty clear that the right ride can boost your odds of getting a date, especially if you’re a man.

We also found as we come out of lockdowns across the world and get our socially distanced dating on, a Tesla could significantly improve your chances of finding love, so unless you’re a Bitcoin millionaire, it might be worth snapping a few photos if your next Uber is a Model 3, before you hop in.

Regardless of what car you drive on your date, there’s clearly nothing more attractive than knowing someone has comprehensive car insurance and that they didn’t pay over the odds for it. So, whether you’ve cruising down the road of love in your Porsche or sat in your garage by yourself with your Azteca, make sure you’re getting the best price on your cover with our cheap car insurance comparison service.