With streaming services like Spotify uploading over 60,000 songs a day, producing a hit song is harder than ever. To understand the anatomy of a hit song, we analysed the lyrics of Number One singles over the past 100 years using Google’s natural language processing, artificial intelligence and software. 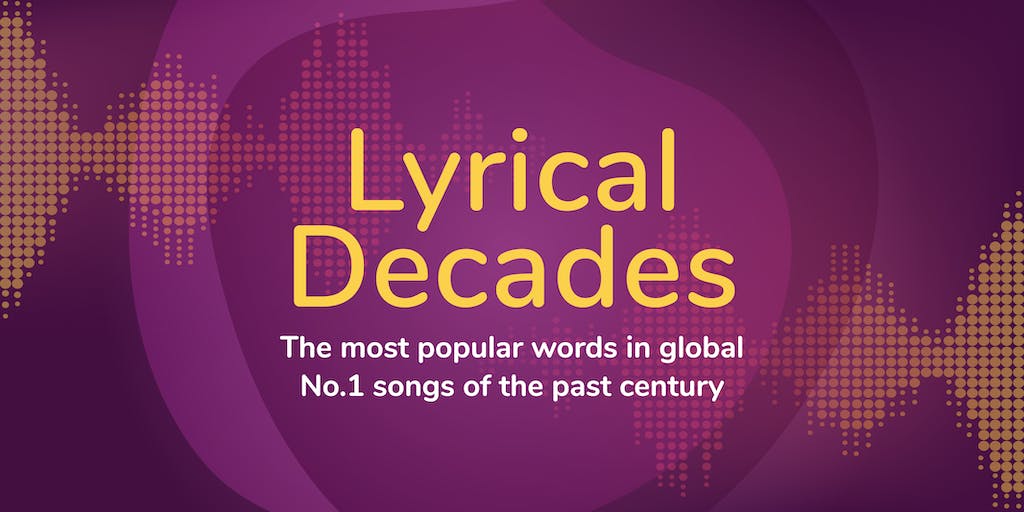 We have uncovered the trends that get our heads bopping and our toes tapping, accompanied by a short sample so you can listen along.

All you need is love: the all-time most repeated word

There were a few words that repeat over and over in our all-time top-tunes. These included ‘one’, ‘heart’, ‘life’ and ‘way’. But one four letter word was the overall champion and appeared in one in three global hits.

‘Love’ is the most common denominator to writing a global hit song. The power of music to evoke ‘love’ and tug on the heart-strings, and in turn the purse-strings, was honed in the 1950s by crooners like Nat King Cole. Songwriters shouldn’t be subtle either, on average, ‘love’ is repeated 18 times per song. Take Ed Sheeran’s ‘Shape of You’ as a recent example, in which ‘love’ is repeated 26 times.

But toppling its 50 year reign, in the 2010s ‘baby’ replaced ‘love’ as the decade’s favoured lyric. This was perhaps a reaction against the mood of the 2000s, in which the repetition of the word ‘love’ reached an all-time high. Don’t be so quick to attribute the rise of ‘baby’ just to Justin Bieber though, the popularity of the pet-name has climbed since the ‘70s. Before then, singers were more likely to address ballads to a ‘honey’ or ‘darling’.

There was one decade though in which the data uncovered a dramatic shift in tone. Reflecting the tense global atmosphere during a period of war, none of the biggest annual hits of the 1940s included the word ‘love’. Instead, our analysis found that words like ‘home’ and ‘all’ dominated the decade’s anthems — perhaps to inspire patriotism and togetherness. 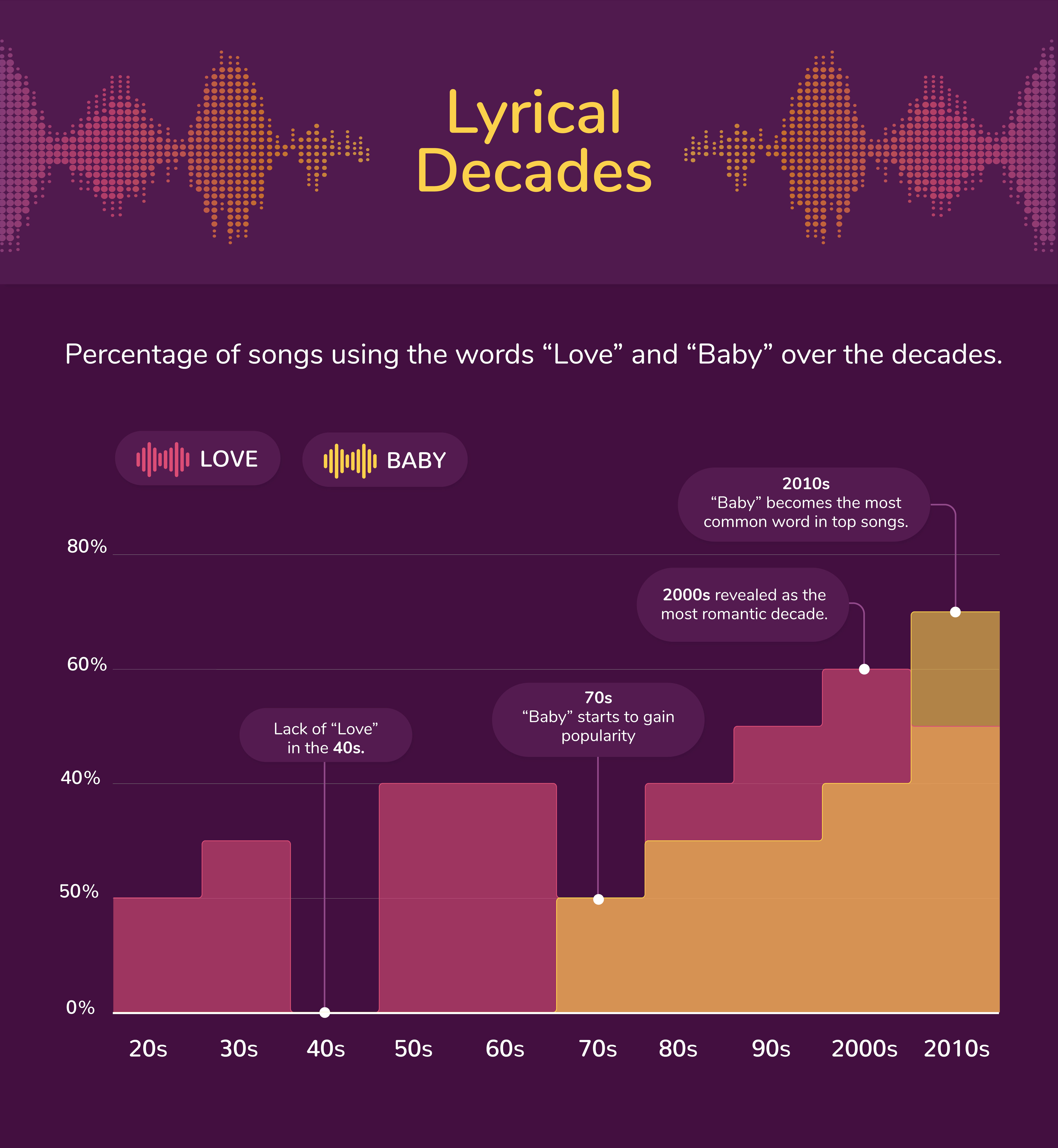 Don't let poor internet stop you from streaming your favourite chart toppers. Ensure you're getting the best connection for a fair price by checking out our broadband deals.

The history of the world told through music

If you could choose a soundtrack to your life, what songs would you pick? The biggest hits of the decade capture a global mood. They inform — and are informed by — the unfolding events around them. So what do the top-repeated words tell us about each decade?

The saddest music of the century belonged to the forlorn flappers of the 1920s. Amongst the most repeated words in the ‘20s were: ‘nobody’, ‘fate’ and ‘blues’. Why is a decade famous for glitz and glamour so gloomy? Ironically, these sad lyrics pinpoint a positive change in the music industry, and a diversification within music. In the 1920s, the ‘Blues’ genre emerged from African-American subculture and into mainstream music, reaching white audiences for the first time.

Another shift in genre — again propelled by the talent of black American musicians — was the rise of Rock 'n' Roll In the ‘50s. The word ‘Rock’ was one of the top three buzzwords of the decade. The high energy of Rock ‘n’ roll encapsulated an optimistic new beginning after the Second World War, and re-injected romance back into the lyrical vocabulary with ‘love’ and ‘heart’ reclaiming the other two top spots.

We can also use the data to see the significance of some less serious cultural moments. With the launch of MTV in 1981, and Jane Fonda’s popularisation of the home-workout, it’s no surprise that we find that ‘80s lyrics were preoccupied with physicality: some of this decade’s top words were: ‘love’, ‘passion’, ‘eyes’, ‘lips’ and ‘heart’.

Have you noticed one common feature of all the lyrics we’ve mentioned so far? They are all English words. Due to its colonial history, English is the most commonly-understood language of the world, and that’s resulted in it becoming the common language of music too. However, despite it being the fourth most spoken language in the world, Spanish takes the title of the second most common language of No.1 hits. In fact, our data diagnosed Pop music with a persistent case of Latin fever. Pop songs used more foreign words than any other genre, and amongst the most repeated words we found were: ‘será’, ‘sí’, ‘Dios’ and ‘Bonita’.

The vast majority of music also comes from one place: 70% of global music hits were ‘Born in the USA’. In second place is the UK who claims 16% of hits, which is not bad when you consider that the UK’s current population is 5 times smaller than its bigger US brother. In third place, with 4% is Canada.

The domination of music by the American superpower leaves little airtime for music from other nationalities. However, there have been a few decades where its power has been challenged. The ‘60s is the most obvious example, when rock bands like The Beatles and The Rolling Stones led the charge of the ‘British Invasion’. 40% of the worldwide hits of the decade were British, an incredible feat considering the UK had the 10th largest population at the time.

The ‘90s also showcased a more diverse range of No.1s. In the ‘90s, potentially driven by Britpop, 30% of hits were British, 20% Canadian, 20% came from other nations and only 30% were American. However, when artists from outside the three major players secured a global hit, it was unlikely to be in their mother tongue. Take the biggest hit of 1994 as an example: would Swedish pop band’s ‘Ace of Base’ have been as successful if it had been ‘Ess av Bas’? Unsurprisingly, nearly everybody likes Pop music. 46.5% of the global top songs over the last century were Pop songs. Jazz came in as the second most popular genre (19%) and Rock 3rd (12%). The remaining 22.5% were split across a range of genres, including Disco, Hip Hop and R&B.

Our data also examined how many unique words each decade had in its global hits (words that had never been used in previous No. 1 hits). We found that the 2000s and 2010s were the most original, with unique words including ‘bourgeoisie’, ‘stardom’, ‘Globetrotter’, and ‘Polaroid’.

The ‘60s were the most repetitive. With the counterculture movement sweeping out from America across the world, life seemed simplified: when you’re high on peace and love, just take The Beatles song ‘Love Me Do’ for reference.

The sound of the future

We’ll likely be ‘babied’ for some time yet. However, with ‘baby’ already saturating 70% of 2010s lyrics, it’s unlikely to become more prevalent. ‘Love’ meanwhile, may climb back up.

The composer Claude Debussy once argued that “Works of art make rules; rules do not make works of art”. Whichever way round you see it, our data has spotlighted some distinct patterns and trends in the music industry. But the question is, will our predictions for the future be right?

Our Song Position data was gathered from tsort.info. In order to best rank the number 1 song of the year, we used a weighted approach to rank all entries from different charts around the world. The different music charts included: the US Billboard, Billboard100 and MTV Video of the year (for more info regarding the chart ranking visit tsort charts list.)

Once the data was gathered we used Musixmatch and Genius to scrape song lyrics. The lyrics were then run through the Google NLP API to gather the entities data.