What is a MiFi dongle?

The internet powers just about everything we do nowadays, from using apps over mobile data to gaming and streaming at home. However, if Wi-Fi networks aren’t available, MiFi dongles may be able to provide connectivity while out and about. 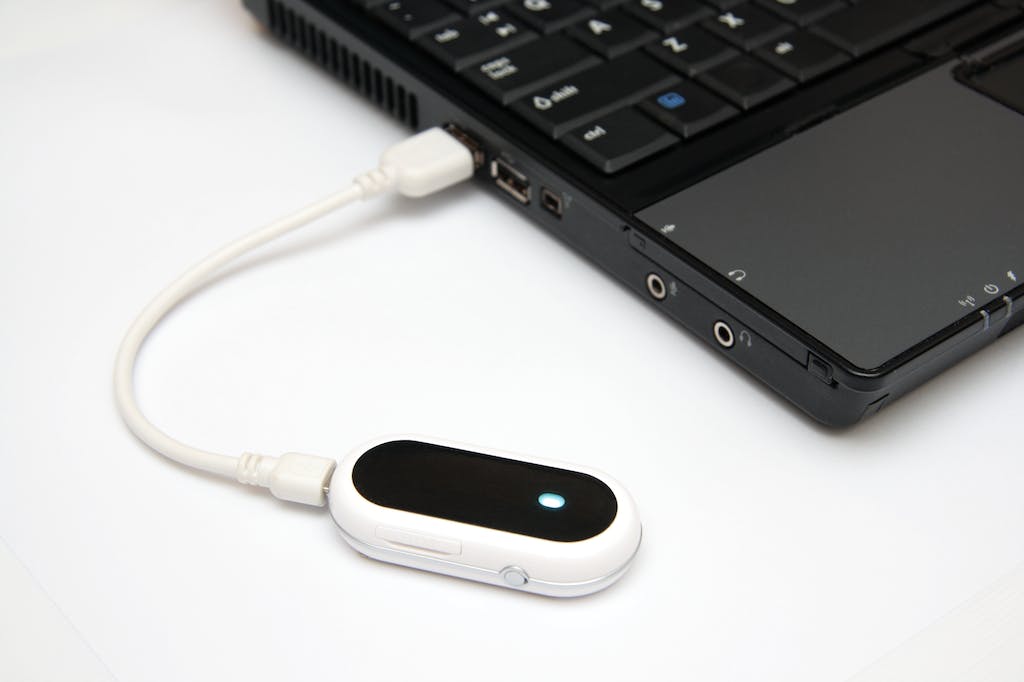 What is a dongle?

A mobile broadband dongle looks very similar to a data key, and it plugs into your devices in the same way, via a USB port. However, rather than storing files, an internet dongle allows a device to connect to mobile broadband through a data-only SIM card. It’s a form of mobile broadband, which we discuss in more detail here.

We all know what Wi-Fi is, but you may see the term MiFi used when researching mobile broadband dongles. MiFi is a mobile Wi-Fi connection – portable Wi-Fi that can be used to power a single device. If you live in an area with poor broadband connections via traditional ADSL or fibre broadband connections, you can also access mobile internet with a MiFi router. These routers are plug-in options that let your whole home enjoy MiFi.

What’s the difference between Wi-Fi and MiFi?

Wi-Fi requires a wired broadband connection delivered through a socket on the wall, which connects to a wireless router. This creates a wireless network that other Wi-Fi-enabled devices can connect to.

MiFi requires a SIM card and a MiFi router to create a wireless network that Wi-Fi enabled devices can connect to. Not all dongles create MiFi networks – plug-in dongles can only provide connectivity to one device at a time.

What is a dongle’s main difference compared to MiFi?

A dongle itself is little more than a SIM holder, and it’s the SIM card that gives it connectivity. If you have a dongle that can create a wireless network for multiple devices, that network is known as MiFi.

Are MiFi and mobile internet the same thing?

MiFi is a form of mobile internet, but mobile internet isn’t always MiFi. Other mobile internet services include 4G/5G smartphone connections, and the aforementioned plug-in mobile broadband dongles which are device-specific and effectively hardwired through a USB port.

What is a dongle commonly used for, and when should I get one?

A dongle itself is no more than a storage device for the SIM card that gives it connectivity. If the device you want to get online already has a SIM card slot, you may not need a dongle at all. The following devices commonly feature a SIM card slot:

Mobile Wi-Fi dongles are easy to find and usually cheap to purchase. There’s no harm in keeping one in a drawer in case a new laptop doesn’t have a SIM slot, or your home broadband goes down while you’re trying to work from home. They’re also very useful for maintaining connectivity while setting up new broadband following a house move, or for periodic connectivity in a second home or holiday home.

How do I use a mobile Wi-Fi dongle?

Dongles are easy to use – just plug them in or turn them on. On first use, your dongle should launch an installation screen requiring some basic registration details. After this, many internet dongles will display a webpage control panel that lets you switch MiFi on and off, so you don’t end up wasting data. You can also check how much data you have left from this screen, topping up even when you’ve completely run out.

Because you only pay for data when you need it, the flexibility offered by mobile Wi-Fi makes it an alternative to no-contract broadband deals.

What other MiFi devices are there?

You can enjoy a MiFi mobile broadband connection through a dongle, a smartphone or a mobile Wi-Fi hotspot, sometimes known as ‘Pocket Wi-Fi’. We consider each of these below.

Mobile Wi-Fi dongles plug into a USB port which provides power and connectivity. In their most basic form, dongles only assist the device they’re currently plugged into.

Smartphones can be used to create a MiFi network, through a process called tethering. If you have a dual SIM phone, you can use a second data-only SIM purely for MiFi.

Mobile hotspots are like dongles, but they’re standalone MiFi devices. You may see them advertised as any of the above names. They don’t need to be plugged into anything, and often work right out of the box. They still need a SIM card, and they require charging just like any wireless electronic device. Mobile hotspots create a MiFi network that multiple devices can connect to, as they would with a Wi-Fi network.

Which network has the best MiFi dongle deals?

Dongle deals can be looked at in two ways. There’s the initial purchase of a dongle and data-only SIM, and then data-only packages once your original data allocation has been used up. The dongles themselves tend to look and function almost identically, with Huawei being the most common brand.

It’s worth noting that the speeds achievable across 5G can easily surpass those on ADSL or even FTTC home broadband. That makes this a good (if expensive) way to temporarily optimise connectivity, particularly if your broadband service is experiencing ongoing connection problems.

Vodafone offers both a dongle and a 4G enabled MiFi hotspot, available on either pay monthly or pay as you go plans. The MiFi hotspot can support up to ten devices, and the dongle can also hold an SD card to add extra storage. Both make use of Vodafone’s 4G network.

Vodafone also offers the GigaCube, a home broadband solution that taps into 4G and 5G to bring mobile internet to your whole home as Wi-Fi. The GigaCube is available on a rolling one-month or fixed 18 month contract, and its 5G speeds will be of particular interest to people on ADSL connections.

Vodafone’s data-only SIM cards can also include free roaming for up to 51 countries, depending on your plan. You can get SIM cards on 30-day or 12-month contracts.

Three offers a range of mobile Wi-Fi hotspots, including a 4G model. At present, there is also a small discount for those who pay by direct debit. For any contracts longer than a year, prices will be fixed for inflation, so expect a small increase. You can purchase Three MiFi devices with a range of plans.

O2 offers two types of dongles – USB devices that plug into a single machine, and MiFi hubs. Both are compatible with 4G, while the 5G Pocket Hotspot Pro brings 5G speeds to wireless devices. Huawei and Netgear pocket Wi-Fi hotspots are also available, with the latter able to accommodate up to 20 devices at a time while offering parental controls akin to a standard broadband router.

Depending on your chosen device, you may be able to pay for it upfront and top up when necessary, though every dongle is available on pay monthly plans that – just like O2’s phone contracts – are highly customisable. Contract lengths range from one to 36 months, and O2 customers can also take advantage of O2 Priority deals and O2’s public Wi-Fi networks.

EE has one of the widest range of MiFi devices available. As of November 2020, its range includes five 4G routers and MiFi hubs, and the same number of 5G devices.

Monthly plans can last for one, 12 or 18 months, while prices on longer contracts will be adjusted for inflation early each year. EE doesn’t currently stock traditional USB dongles, though this shouldn’t be an issue given the affordability of its Wi-Fi hotspots.

Available exclusively on 4G, data-only SIM cards can be pay as you go or pay monthly, with contracts running for one month or two years. EE is also notable for providing data gifting, so you can share your data allowance with others.

Virgin Media offers a Wi-Fi hotspot option that can support up to 16 devices. It’s also unlocked which makes it ideal for taking on holiday, although as roaming is included on Virgin’s SIMs, existing UK plans can be used as well. Virgin promises download and upload speeds of up to 150Mbps and 50Mbps respectively, with six hours of battery life while the hotspot is in use.

You can buy dongles and MiFi routers from other retailers, but in doing so, you might miss out on deals that throw in customer perks, extra savings or bonus data.

Can I use my phone SIM in a tablet or dongle?

Yes, you can, but this is rarely a good-value option. Dongles won’t let you use calls and texts, so you won’t be able to benefit from these services even though they’re being paid for. What you want is a data-only SIM, so you’re only paying for what you need.

This depends on your network. If your chosen provider has locked your dongle, they can’t be used with other network SIM cards. Get in touch with your network operator to unlock a dongle – some mobile providers will do so for free.

Can I use a data-only SIM without a dongle?

If your device has a SIM card slot, you don’t need a dongle at all. If you have a dual SIM phone, or are willing to take out your SIM, your smartphone can serve as a MiFi device, tethering other devices to the SIM card’s wireless data.

Do I need a home broadband contract to use MiFi?

Because MiFi is provided through a SIM, you don’t need a home broadband contract to use mobile broadband. If you’re looking for both, there are some great home broadband and mobile deals from networks like Virgin Media and Sky Mobile.