The 10 Hardest Festival Tickets to Buy in the World

With the roadmap out of lockdown looking promising for summer, the sales of festival tickets have skyrocketed (along with cancellation insurance). The broadband experts at money.co.uk have discovered which festival tickets are the hardest to secure.
Share this guide 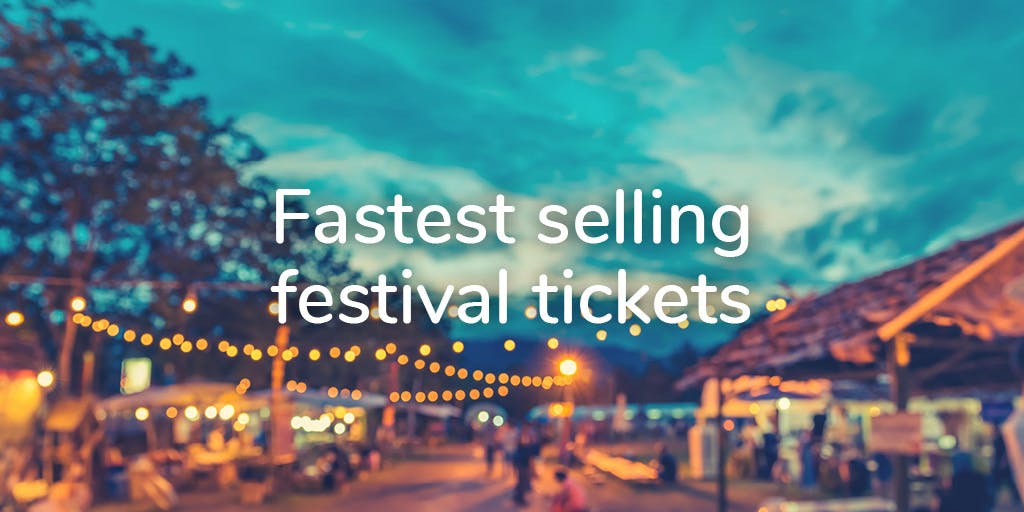 In February 2021, Ticketmaster saw a 600% rise in online traffic as people scrambled to get their hands on popular festival tickets. While some of the big-name festivals, such as Glastonbury, won’t be operating as normal this year, others such as the Isle of Wight festival and Wireless are still going ahead.

With the demand for tickets higher than ever, we were curious to find out which festivals around the world were generally the hardest to get tickets for online. Taking YouGov’s list of the most popular festivals known to the British public, we investigated how many tickets each festival had available and analysed how long they took to sell out.

We looked at official press releases, blog posts and Twitter feeds to acquire this data. We then worked out how many minutes it would take to sell 1000 tickets and created an index of this, comparing the world’s most popular festivals.

From our research here’s what we found were the top 10 fastest selling festivals around the world:

The weekend-long Summerfest is an annual festival held in Wisconsin and is one of the biggest festivals in the USA. Spanning over 11 days and hosting over 800 alternative and cross-genre bands, Summerfest sees hundreds of thousands of guests each year, topping our list for the time it took to sell out in 2021. 800,000 tickets were available this year and sold out just 5 minutes after they were released, meaning it took as little as 0.00625 seconds to sell 1000 tickets.

Tomorrowland ranked number 1 on our list for global monthly search volume and number 2 for how quickly it sold out. Held over a late summer weekend in Belgium, the popular electronic dance music festival who has previously featured the likes of The Chainsmokers, David Guetta, Dimitri Vegas & Like Mike and Martin Garrix.

Much to the disappointment of many fans, this festival was cancelled for 2021. But typically, 90,000 tickets sell out in just 2 minutes. This means that it takes only 0.02 seconds to sell 1000 tickets to Brazil’s rock fans.

The ever-popular and much-loved Glastonbury festival is another that won’t be going ahead in 2021 as normal. Instead, a global virtual live stream can be enjoyed by fans for £20 on the 22nd of May where Coldplay, HAIM and Jorja Smith will perform along with a number of surprise guests too.

Normally, however, Glastonbury runs over a weekend with 200,000 tickets immediately up for grabs. From our research, we discovered that it takes 27 minutes for all the tickets to sell out and 0.135 seconds to sell 1000 tickets.

Coachella is one of the most famous and ‘Instagrammable’ festivals every year. Held in California over two weekends, this festival offers multi-genre music and is visited by many A-list music acts  showcasing vibrant and unique fashion.

Although postponed until April 2022, there are usually 250,000 tickets available to buy online per weekend for $429. Taking just 0.24 seconds to sell 1000, tickets to Coachella sell out in just 1 hour for the debut weekend, and a little bit longer for weekend 2.

Every year, tens of thousands of people gather in August in Nevada's Black Rock Desert for the Burning Man festival. This cross-genre festival also focuses on art and self-expression and is currently planned to be held over a weekend in late August.

With an exclusive 80,000 tickets available, they sell out very quickly. 1000 tickets are sold every 0.375 seconds once released, taking a total of 30 minutes to sell out.

Parklife is an independent music festival held annually in Manchester over a weekend. This September the festival is planning on coming back with a bang with Dave, Megan Thee Stallion, Disclosure, Skepta and more booked to perform. 80,000 tickets are released at £155 which on average takes 0.975 seconds to sell 1000 and 78 minutes in total to sell out.

Capital’s Summertime Ball is classed as one of the biggest summer parties in London. Although it only runs for a day, the likes of Ariana Grande, Tinie Tempah, Rag N Bone Man, Maroon 5 and Halsey have all performed here for a perfect day of pop and dance music.

9. Splendour in the Grass

Splendour in the Grass is an indie rock, hip hop and electronic festival held in the North Byron Parklands in Yelgun, New South Wales. Rick Astley, The Vamps, Belinda Carlisle and Becky Hill are all set to perform at the Aussie festival over a weekend this July. 50,000 tickets are put up for sale online which takes 1 hour to sell out at a rate of 1000 tickets being sold every 1.2 minutes.

With pop, rock, dance music, grime, hip hop and R&B, Radio 1’s Big Weekend was the biggest free-ticketed music event in Europe. While usually held in different locations within the UK every year, in 2020 and 2021 the festival will be happening virtually with four days of live music taking place between the 28th and 31st of May.

We analysed 58 festivals in total and, from our data, learned that electronic music festivals often sell out the fastest. With Tomorrowland ranking number 2 for the time it took to sell 1000 tickets, Awakenings Festival in rank 13, Boomtown Fair in rank 14 and Lovebox Festival in rank 20, this genre had the most number of festivals toward the top of the list.

How does your favourite genre fair up? 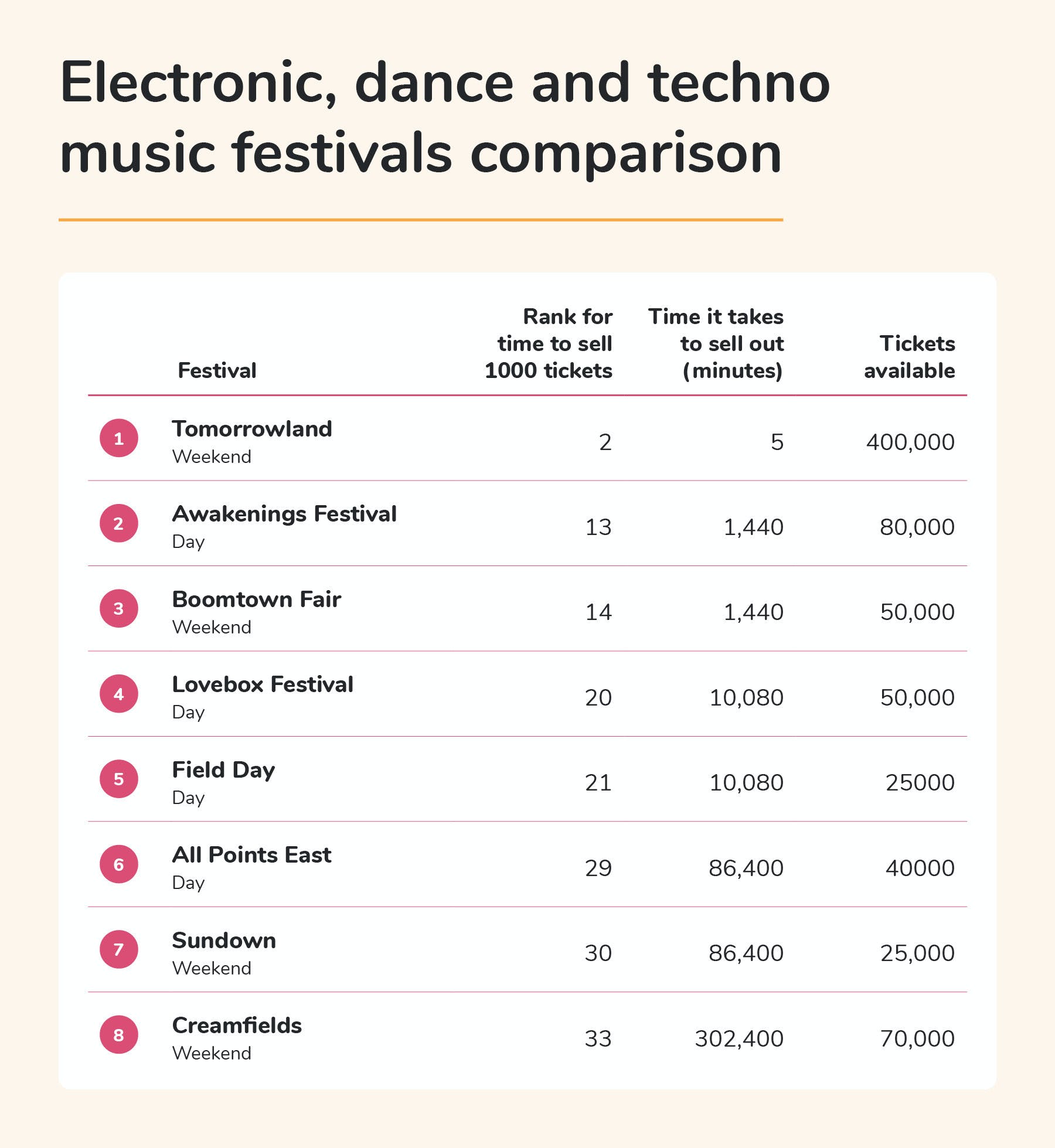 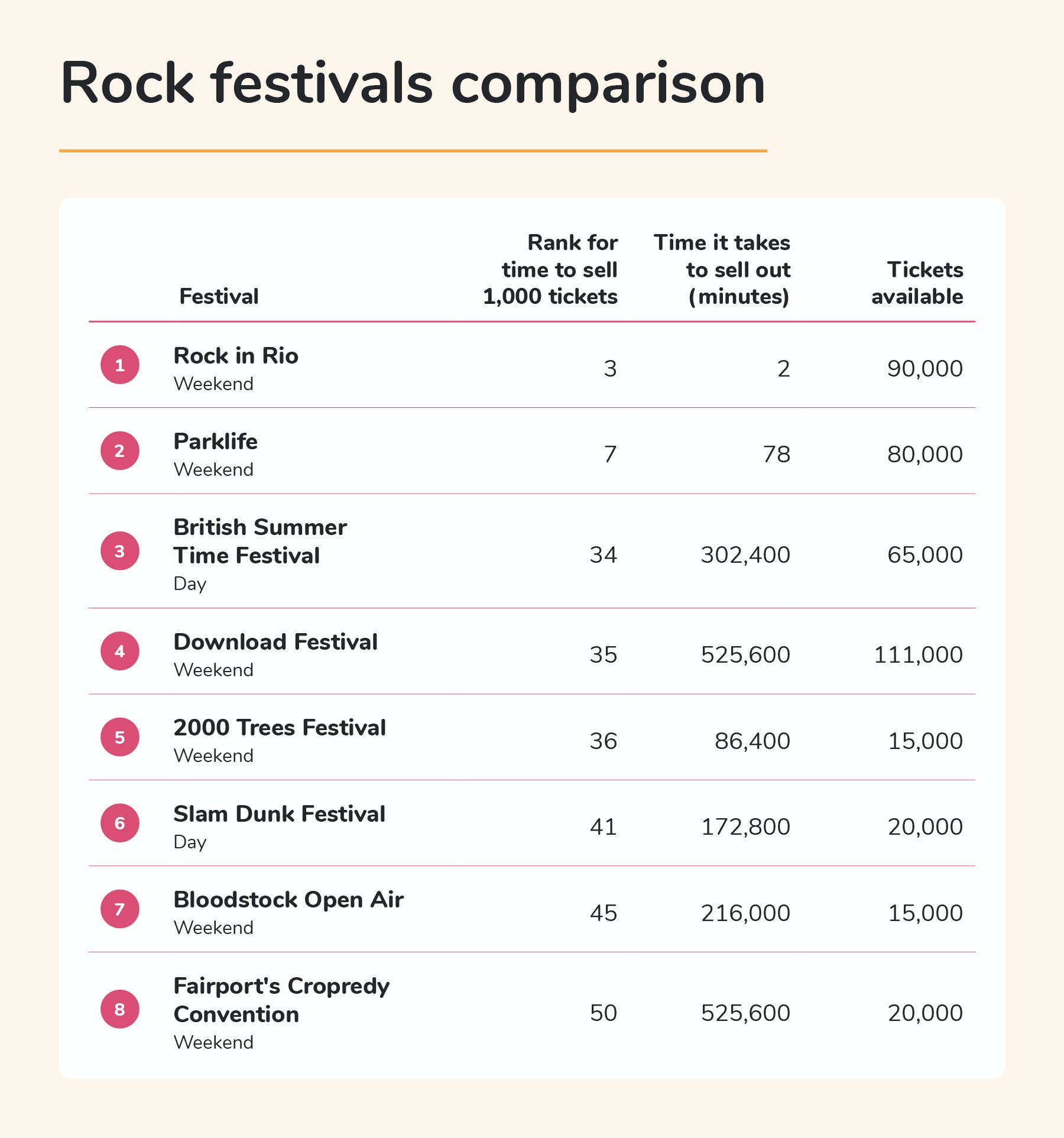 When it came to rock festivals, Rock in Rio ranked 3rd while Parklife finished in 7th and Download Festival was 34th. Despite Download having around 111,000 tickets available, the festival rarely sells out, which means great news for the rock lovers of the U.K who can attend the festival as they please!

For pop festivals, Summertime Ball was ranked 8th for the time it took to sell 1000 tickets, with Wireless Festival 15th and MADE Festival in the Midlands 22nd. All of these pop festivals are held over for a day rather than a weekend like the majority of our highest ranking festivals. 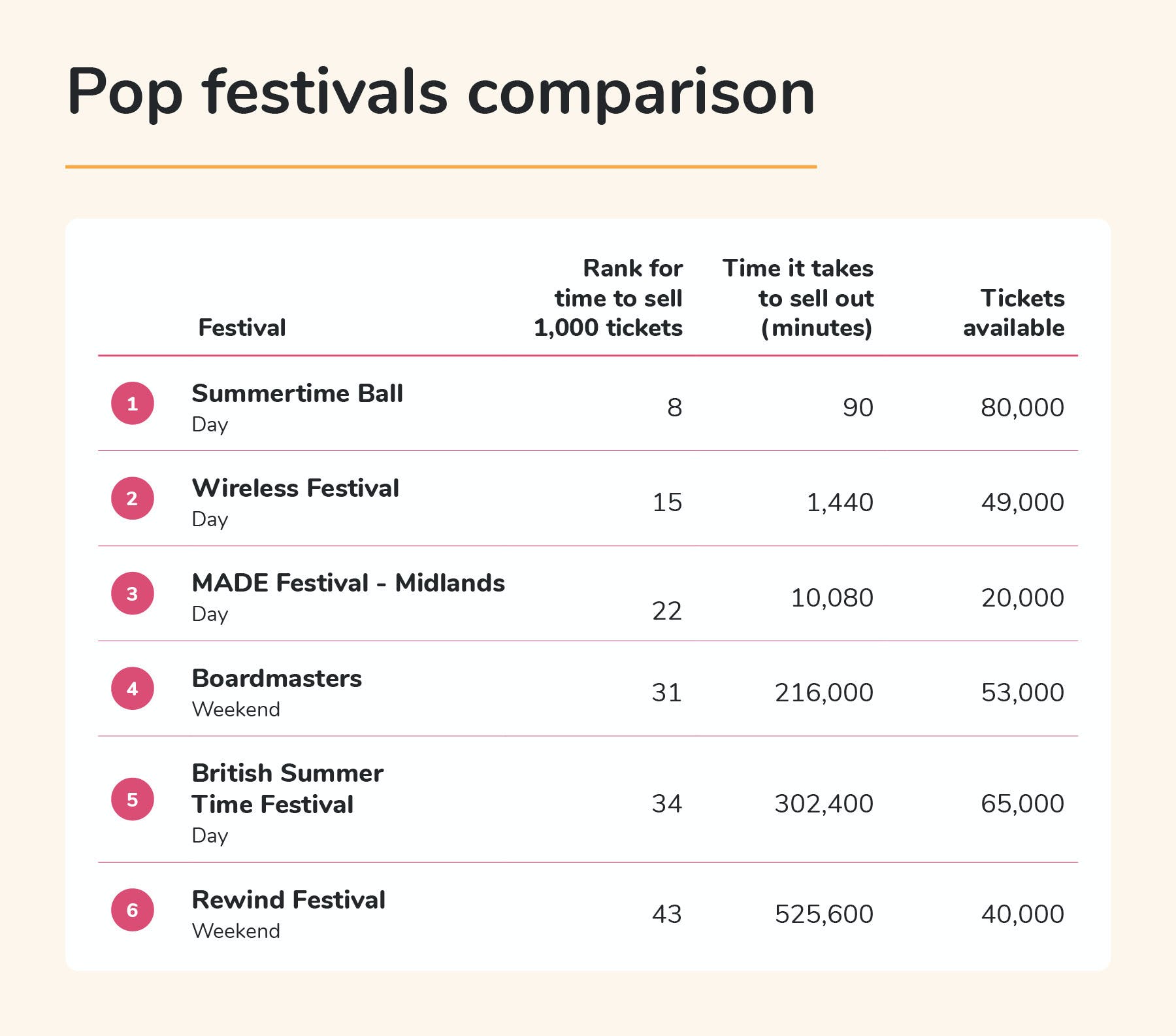 The festivals that were on the lower end of our list for the time it took to sell 1000 tickets were classic and the arts. With BBC Proms ranking 11th, Harrogate International Festivals ranking 37th and Glyndebourne Festival ranking 38th.

Both Harrogate, which takes on average 4 days to sell 1000 tickets, and Glyndebourne festivals, which also takes just over 4 days to sell 1000, rarely sell out. Whereas the more popular and globally recognised BBC Proms takes just 12 hours to sell out completely, with a handful of tickets left on the door for spontaneous classical music lovers. 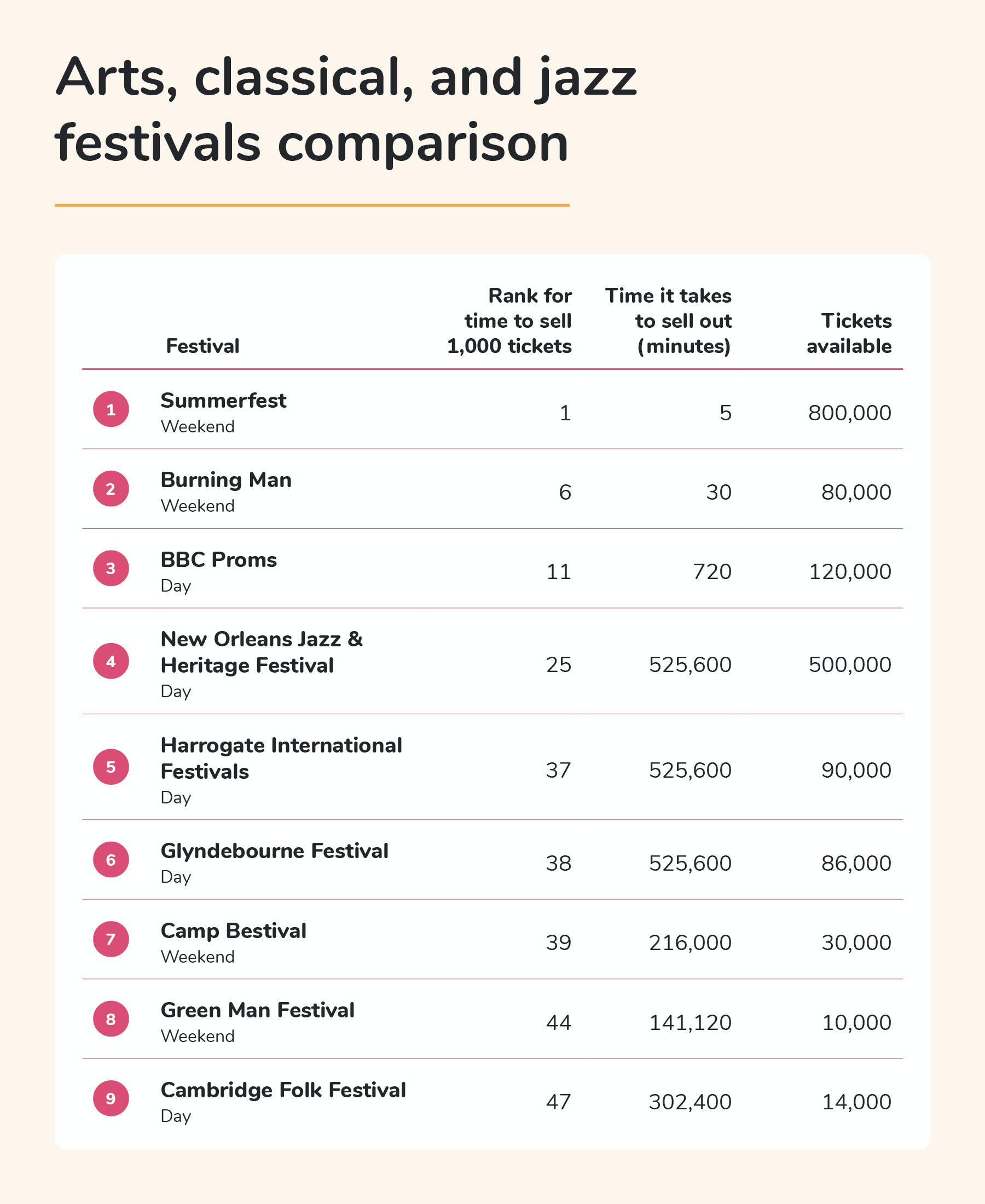 We took YouGov’s list of most popular festivals known to the British public, and investigated how many tickets each festival has available, and how long they take to sell out. We looked at official press releases, blog posts and twitter feeds to acquire this data. We then worked out how many minutes it would take to sell 1000 tickets and created an index of this comparing the world’s most popular festivals. We narrowed down these festivals to the top 50 and any festivals that rarely sold out prior to the event we allocated 365 days as a comparable.

If you’re planning on attending as many festivals as possible in 2021 and 2022, get ahead start on the online queues by upgrading and saving on your broadband.