Battle of the originals: Which streaming services and broadcasters produce the most gender-balanced shows?

In the past 12 months, many of us have watched more TV than ever before. And with new, original content on streaming platforms like Netflix and Amazon Prime Video hitting our screens almost every week, it’s no surprise that traditional broadcasters such as Sky and the BBC are upping their game too. But with so much new content on the go, are these streaming giants paying attention to equal representation, both in front of and behind the camera? 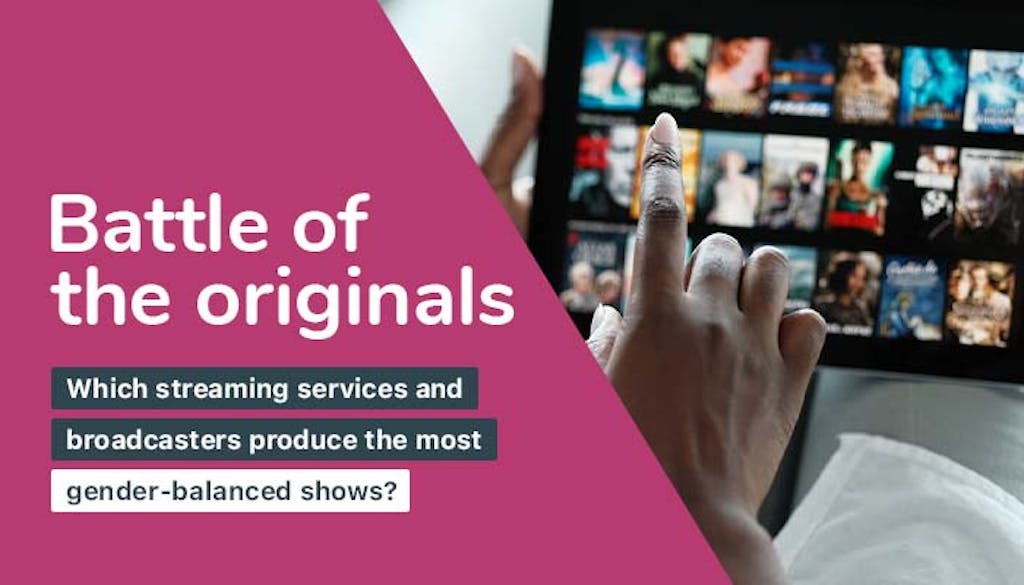 The most gender diverse streaming platforms from Netflix to BBC

Looking at five of the most popular streaming services and broadcasters in the UK, it was the streaming platforms that certainly seemed to have more gender diversity, both in their main casts and in terms of directors too.

While none of the five platforms and broadcasters that we looked at had 50-50 parity when it came to their casts, it was Netflix that had the highest proportion of female cast members, with 46.1%, closely followed by Prime Video, with 44.5%.

ITV had the highest percentage of female cast members of the traditional broadcasters, with 44.6%, while Sky had the lowest by some way, at only 41.7% female.

Behind the camera, there was even lower representation for women.

At the top again, Netflix had the most diverse lineup, with 34.5% of directors being female. For traditional broadcasters, this was significantly lower, with only 14.1% of ITV’s directors being women.

How gender diverse are Netflix originals?

Of the 162 Netflix originals we looked at, 36 of them had an equal makeup of male and female actors in the main cast. These include popular shows such as ‘Ozark’, ‘Grace and Frankie’, and ‘Jessica Jones’

A number of Netflix originals also boast a top cast of predominantly female actors. True crime series, ‘Unbelievable’ has an all-female top cast, while ‘The Baby-Sitters Club’ has just one male actor in the top cast compared to six females.

However, there were also a few that weren’t so diverse. In fact, four shows had the main cast with a line up of only male actors - ‘American Vandal’, ‘The Midnight Gospel’, ‘The Liberator’, and ‘Lunatics’. 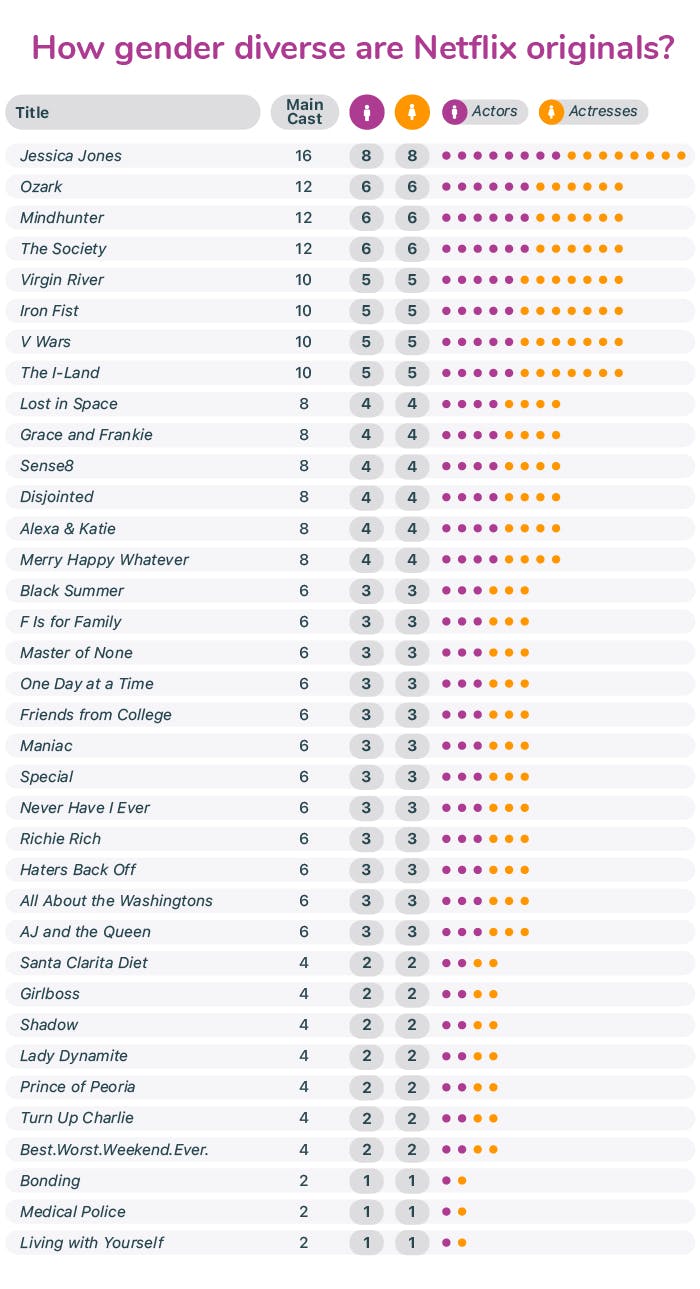 We looked at 48 Amazon Prime originals, 10 of which had an equal billing of male and female actors as part of their main cast. These include shows such as ‘Sneaky Pete’, ‘Homecoming’, and ‘Hand of God’.

Amazon has 11 originals where the top cast is predominantly female, with the drama series ‘The Wilds’ scoring highest with a top cast makeup of 82% women, with ‘Annedroids’ placing second with 80% of their top cast being women.

But while they may be able to boast that more than 20% of their originals have fully gender diverse casts, Prime Video is not immune from a lack of diversity by any stretch of the imagination, with the show ‘Mad Dogs’ sitting at the other end of the spectrum with all five of the main cast members being men. 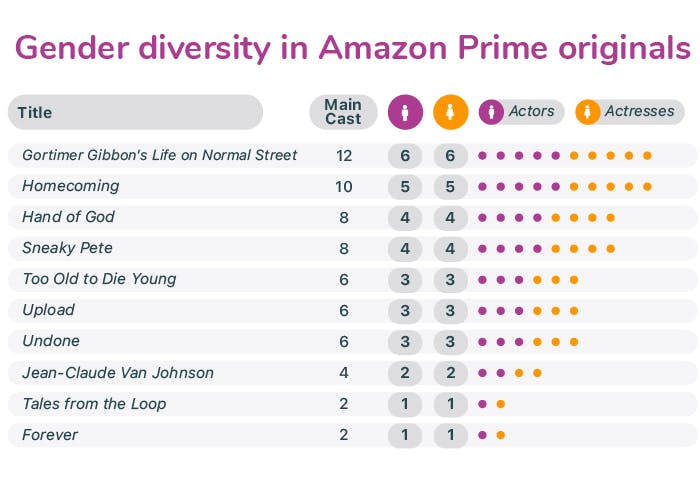 Which is the most gender diverse streaming platform behind the scenes?

We also decided to take a look behind the camera, to see whether women are getting a fair shot when it comes to directing our favourite shows too.

The figures show that for both Netflix and Prime Video, there's a much greater imbalance when it comes to directors than there is for cast members. Netflix has slightly more female directors at  34.5% compared to 34.3% for Prime Video. 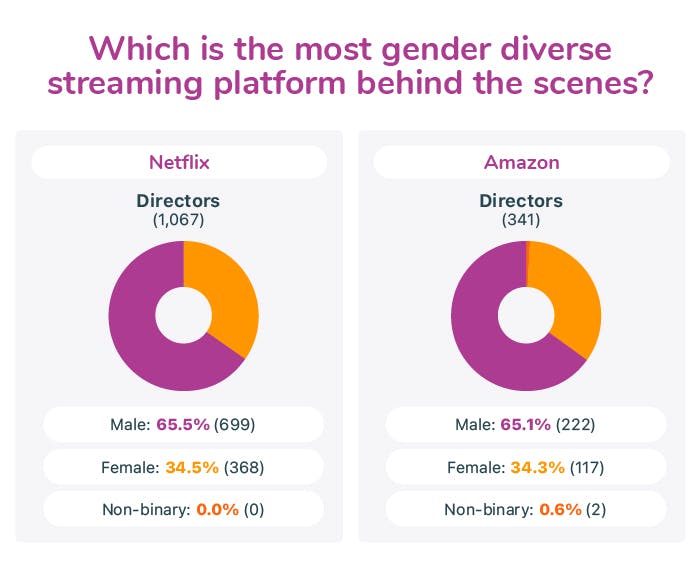 While they only make up a very small number of personnel both in front of and behind the camera, non-binary actors and directors are represented on both Netflix and Prime Video.

They include Lachlan Watson on The Chilling Adventures of Sabrina on Netflix, making them one of the youngest non-binary actors in Hollywood, and Theo Germaine on The Politician.

There was just one non-binary director behind the camera on both streaming services, which was Joey Soloway, although they worked on two shows on the platform, I Love Dick, and Transparent, a show which focuses on a family’s discovery that their parent is a trans woman.

Which are the most gender diverse original programmes on the BBC, ITV and Sky?

None of the original programmes on the UK’s three main broadcasters had fully female casts, although there were three programmes which all had a cast made up of 71% female actors, Call the Midwife and Make Me Famous on the BBC and Vera on ITV. The Sky original programme with the highest percentage of women in the cast was Code 404, with 60%.

However, there were some programmes with almost exclusively male casts, including the BBC’s football comedy series The First Team (94% male cast), ITV’s serial killer mini-series Des (92%) and Sky One’s Brassic (83%). 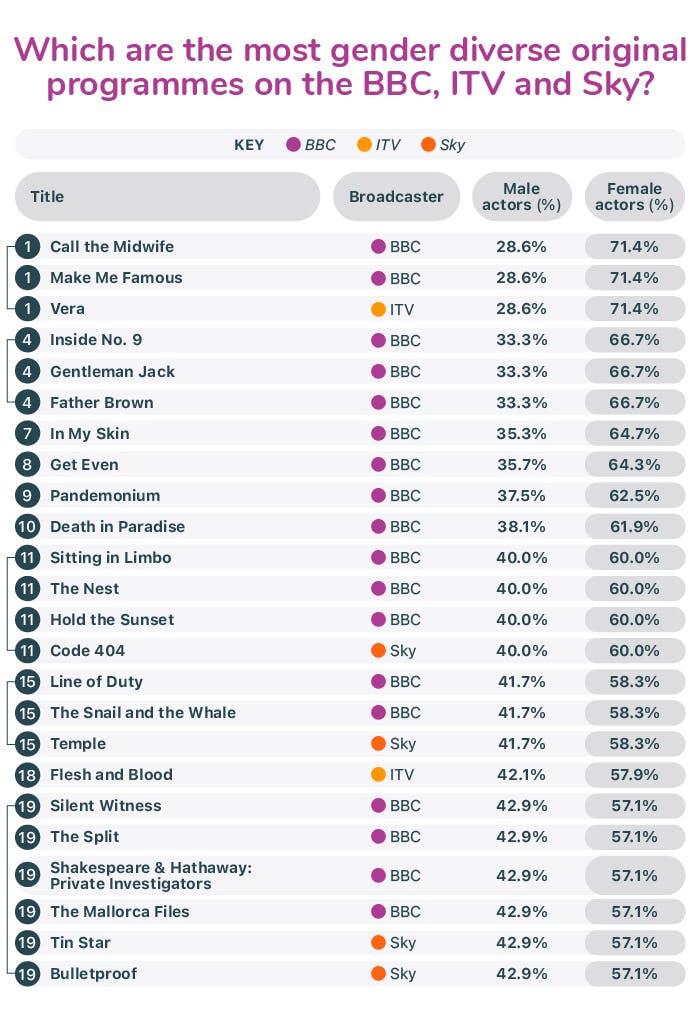 The most gender diverse UK TV channels behind the scenes

Directors on traditional TV networks were far less gender diverse than their streaming equivalents, with the proportion of female directors ranging from 26% on the BBC to 14.1% on ITV.

While there were some examples of fully female-directed shows, such as Gentleman Jack on the BBC, the majority were helmed by men. 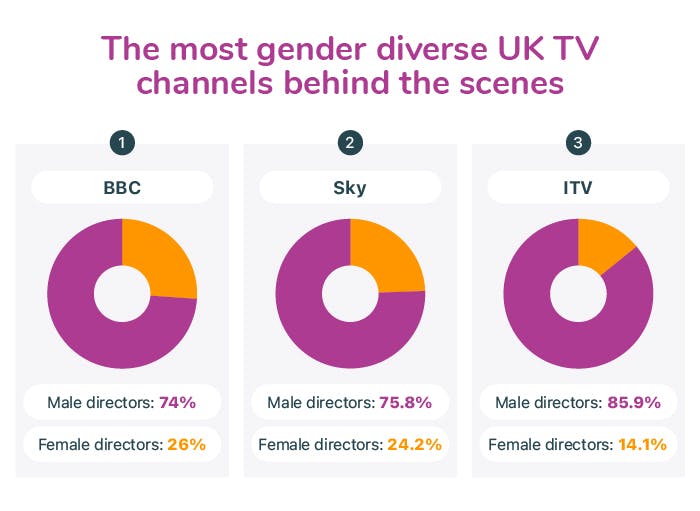 Whichever original series you're thinking of streaming next, make sure you’re getting the best connection at a fair price by comparing all of our best broadband deals.

We analysed the main cast of original programming on Netflix, Prime Video, the BBC, ITV and Sky, taking the number of male and female cast members and directors for each.

For Netflix and Prime Video, we looked at each platform’s full catalogue of original programmes, excluding the likes of kids shows, reality shows, documentaries, anime, stand up and sketch comedy, and foreign-language shows.

For the BBC, ITV and Sky, we looked at original programmes which either aired in the last year or have new episodes set to be released in the future.

When it came to long-running shows such as Doctor Who and Holby City, we only looked at the current cast and directors who have directed an episode in the most recent series and omitted the directors of long-running soaps from our averages too.